Even after a down year in 2022, the Padres’ center fielder offers considerable upside relative to the Yankees’ internal left field options.

The first few weeks of December saw a whirlwind of free agent activity the likes of which we have not seen in recent memory. Teams handed out mega deals of unprecedented value and length left and right, and the Carlos Correa saga rages on unresolved into the new year. There was a lull in activity during the holiday period as it felt teams and front offices took a collective breath, but now that the calendar has turned over to 2023, might we see a resumption in offseason activity?

With every impact free agent off the board, any remaining excitement is likely to come from the trade market. So when Dennis Lin of The Athletic reports that the Padres may be willing to make Trent Grisham available in a trade, ears in GM offices around the league are certain to perk up. That’s especially true for the Yankees, in need of a starting outfielder having passed on all the quality options earlier this winter.

It’s hard to fault the Yankees for their offseason exploits to this point, having brought back Aaron Judge and Anthony Rizzo while adding Carlos Rodón and Tommy Kahnle in the largest winter spending spree in franchise history. However, the fact that they were able to make this level of investment and run a payroll north of $290 million and still have potentially season-jeopardizing deficits on the roster — left field, third base, and shortstop leap to mind — generates a justifiable level of angst in the fanbase. Their passive attitude toward left field in particular means that the remaining options are either non-needle-movers or prohibitively expensive. Therefore, the Yankees would be negligent not to check in on Trent Grisham’s availability

Selected by the Brewers with the 15th overall pick in the 2015 MLB Draft, Grisham was traded alongside Zach Davies to the Padres for Luís Urias and Eric Lauer following the 2019 season. The following year saw him break out on the major league stage, finishing as the sixth-most valuable qualified outfielder (2.2 fWAR) in the COVID-shortened campaign. It appeared the Padres had made out like bandits on the 2019 trade and had the centerpiece of their outfield for years to come.

Unfortunately, Grisham never quite replicated the heights of that season, backsliding slightly in 2021 before suffering his worst performance in a full season in 2022. Even while appearing in a career-high 152 games, Grisham failed to reach the win total of his 2020 season while finishing with the lowest batting average of any qualified hitter (for people who are into that kind of thing).

It’s not immediately apparent why it all went wrong for Grisham with the bat in 2022. He struck out and whiffed a little more but not enough to account for the steep drop-off in production. A .231 BABIP more than 40 points lower than his career average suggests some bad luck while his exit velocity, launch angle, barrel rate, and hard hit rate were all within league average.

For starters, it appears a horrid September and October in which he managed a 1 wRC+ dragged down his overall season numbers, however at no point during the preceding five months did he produce at a league-average clip. It does look like he exchanged a fair number of line drives for groundballs and popups — the highest frequency of his batted balls were hit either at too shallow or too steep an angle which explains how his average launch angle could’ve remained unchanged but his sweet spot rate cratered eight points from his career norm. 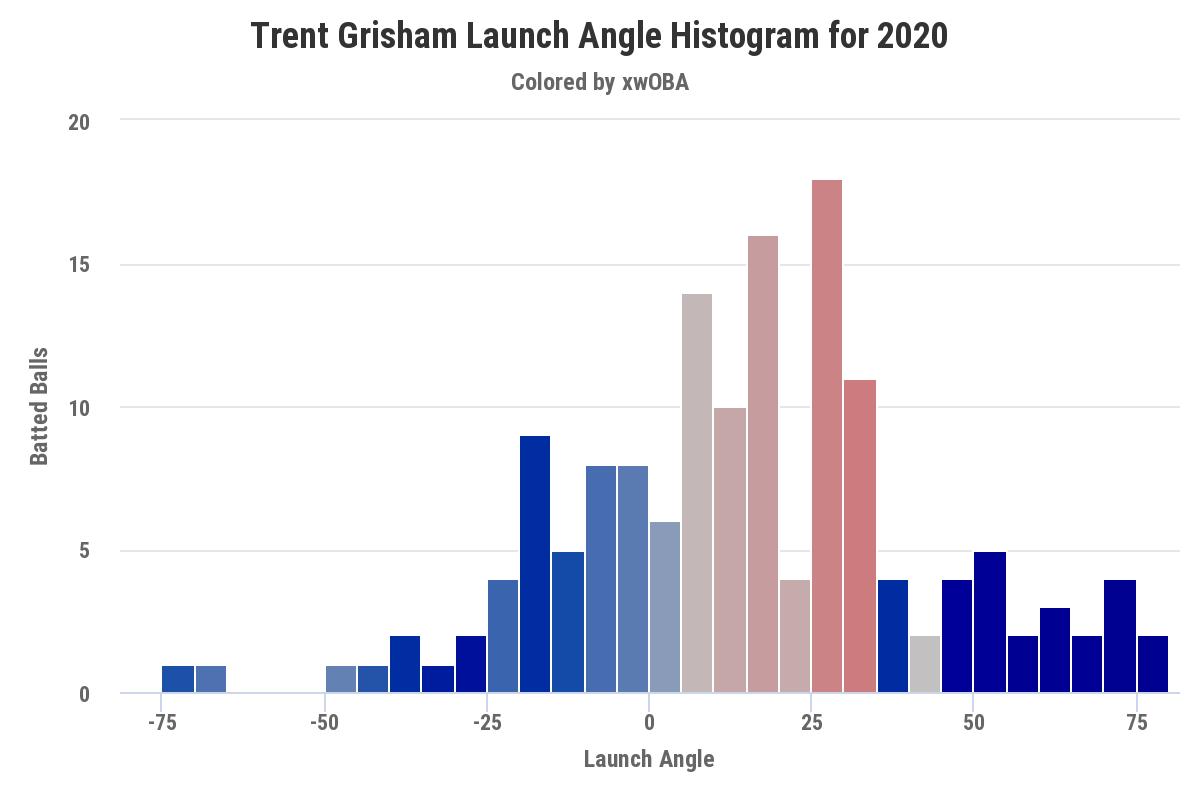 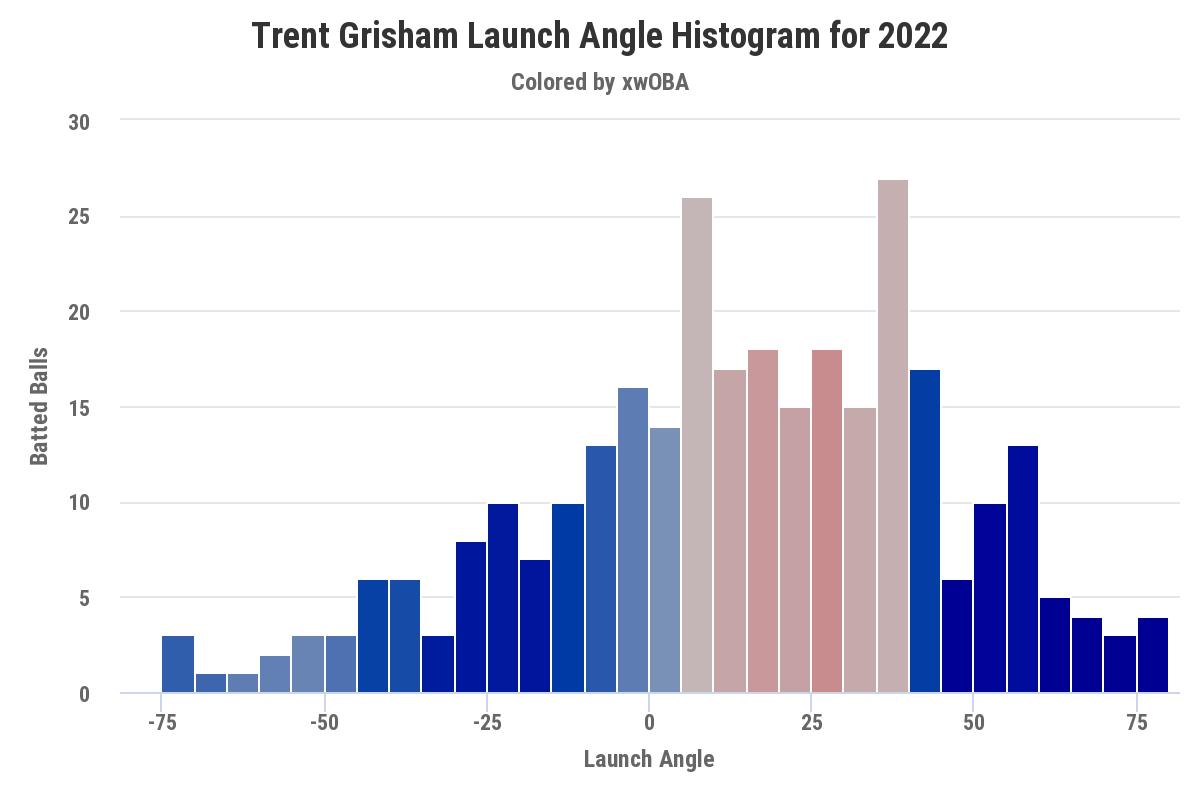 Even such a disastrous offensive performance as 2022 should not scare the Yankees away from a pursuit of the center fielder. For starters, he still did some elite things in the box last season, placing in the 93rd percentile in chase rate and 83rd percentile in walk rate. And as a left-handed batter without gaudy exit velocities who hits a high proportion of his fly balls to the pull side, one can dream that his power numbers would see a boost in Yankee Stadium. He also finished in the 99th percentile in Outs Above Average, trailing only Daulton Varsho by a single out for the title of best defensive outfielder in MLB. He’s never finished lower than the 92nd percentile in OAA, and pairing alongside Harrison Bader and Aaron Judge, the Yankees would have hands-down the best defensive outfield in baseball.

I actually view Grisham and Bader as having very similar profiles — the crème de la crème of outfield defenders whose defensive abilities provide the pair a super high floor in terms of the value they can produce. If they are able to produce above-average offensive results as each has shown previously in their careers — 122 wRC+ for Grisham, 114 wRC+ for Bader in 2020 — all of a sudden you are looking at a five-to-six win player. At the very least, with Bader slated to hit free agency following the upcoming season, Grisham would give the Yankees an immediate replacement in center without sacrificing any of the defensive prowess of the man he would replace.

Of course, a 26 year old outfielder under team control for three more seasons will not come cheap, especially given the paucity of starting-caliber outfielders remaining on the market. And the Yankees might find it particularly difficult to entice the Padres considering they are seeking major league starting pitching in return. The Yankees have very little of that which they are willing to offer as compared to other teams vying for Grisham — the Marlins for example make the most sense given their own need for outfielders and the Padres’ previous interest in Pablo López.

Nestor Cortes is likely untouchable, leaving Domingo Germán and Clarke Schmidt as the only two players who fit the bill of what San Diego seeks. I’m not sure either player moves the needle. However, just because the two teams are not a perfect match should not prevent the Yankees from trying. Grisham would be a certain upgrade over the Yankees’ two internal options for left field from an overall value standpoint, with several projection systems predicting him to at least double the wins outputs of Oswaldo Cabrera or Aaron Hicks. Given A.J. Preller’s propensity for rapidly-evolving trades, the Yankees better get on the phone soon lest they miss out on yet another viable option for left field.