Throwing the sweeper more often can enhance the effectiveness of the best pitch in Marinaccio’s arsenal.

The Yankees are AL East champions with seven games to spare, which means it’s the perfect time to bring back one of mu favorite series: Separation. This season, I’ve tried to feature a selection of Yankees pitchers who have tweaked their arsenals, mechanics, or pitch shapes to create separation between the movement profiles of their offerings. Today, I’d like to look at rookie reliever Ron Marinaccio.

Marinaccio has been a revelation for the Yankees, never appearing among the top prospects in the organization, yet earning somewhat of a surprise call-up at the beginning of the year. He’s rewarded that faith by becoming one of the Bombers’ best bullpen arms, pitching to a 2.18 ERA (181 ERA+) and 3.22 FIP with 53 strikeouts in 41.1 innings that included a streak of 15 straight appearances without surrendering an earned run from the end of May to the end of July.

Like fellow bullpen mate Wandy Peralta, Marinaccio features primarily a fastball/changeup mix, throwing the tandem over 80 percent of the time. Back in June, I explored how increasing usage of the slider could improve the outcomes of Peralta’s other two pitches. I would prescribe the same strategy for Marinaccio.

But before we talk about Marinaccio’s slider, we have to discuss the two pitches he leans on most. He throws a four-seamer in the mid-90s and can run it up to 97. The pitch features good rising life thanks to above-average spin and excellent spin efficiency (99 percent active spin). This allows him to get whiffs underneath the pitch, especially when it is thrown at the top of the zone.

The real weapon is the changeup. Three months ago, Esteban analyzed how Marinaccio’s changeup was a unicorn pitch, with one of the most extreme horizontal attack angles of any changeup in MLB. It’s truly his bread-and-butter pitch — he’ll throw it any count for called strikes and to get a chase, and you’ll see him throw multiple in a row when he needs to escape a jam.

With a pitch this effective, it’s no surprise how often he uses it. It didn’t take long for the league to learn his affinity for the offspeed, and David Cone made an excellent point on a recent YES Network broadcast that when you have an elite pitch such as Marinaccio’s changeup, you need at least one other dependable offering to protect it and prevent hitters from sitting offspeed.

That’s where the problems sometimes arise for Marinaccio. While the raw characteristics of the four-seamer are good, his command with the pitch can disappear at times, forcing him to lean too heavily on the changeup even to find the zone. At that point, hitters can wait on the offspeed and otherwise take the free pass that Marinaccio has shown a propensity to dish out.

This is where I feel the slider can be a valuable asset, as it not only gives him another option (should he not have a feel for the fastball) to protect the changeup, but the particular slider that Marinaccio throws exhibits divergent horizontal movement from both his four-seamer and changeup. Earlier I mentioned Peralta’s slider, but I have to draw a distinction. While Peralta throws a slider with a heavy gyro spin component, Marinaccio throws the whirly version, achieving over 14 inches of horizontal sweep with the pitch.

Check out this slider to strikeout Jose Siri swinging:

It’s the classic Yankees whirly slider, starting out down the middle of the plate before diving gloveside late, so that it ends up a foot off the dish by the time Siri swings.

This gloveside movement is the perfect foil to combat another issue that arises from heavy reliance on the fastball/changeup pairing. Those latter two pitches feature similar armside movement, with the separation coming from the velocity differential and vertical drop differential. They almost stack on their way to the plate.

This fastball/changeup overlay to Rob Refsnyder illustrates this perfectly:

Marinaccio exhibits a natural feel for tunneling his four-seamer and changeup, with the two pitches charting similar courses toward the plate until the changeup ducks beneath the plane of the fastball at the last minute, often causing the hitter to whiff over the top. You can see how this pairing alone can be a deadly combination, but introduce a slider with inverse horizontal movement and the hitter has a serious problem.

Here’s what I mean about divergent movement between the slider and changeup:

The pitches take opposite turns, such that the tunneled pair that looked like they’d land in the zone ended up two plate’s widths apart.

I’d hate to be a hitter facing this trio of pitches. All three come out of a roughly similar chute, yet land in wildly different spots.

I’ve pulled freeze-frames from the fastball/changeup overlay and the triple overlay to show the effect of introducing the slider: 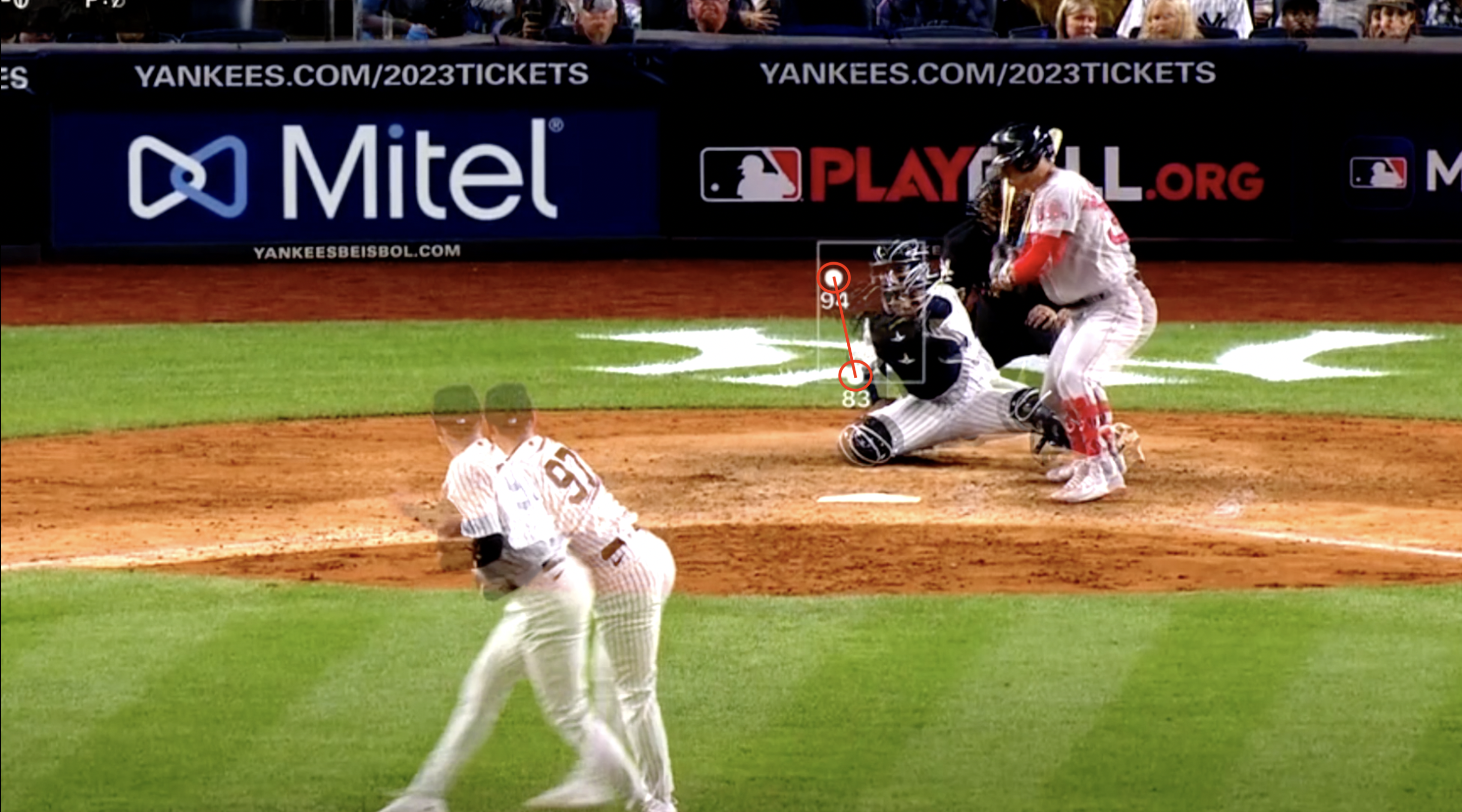 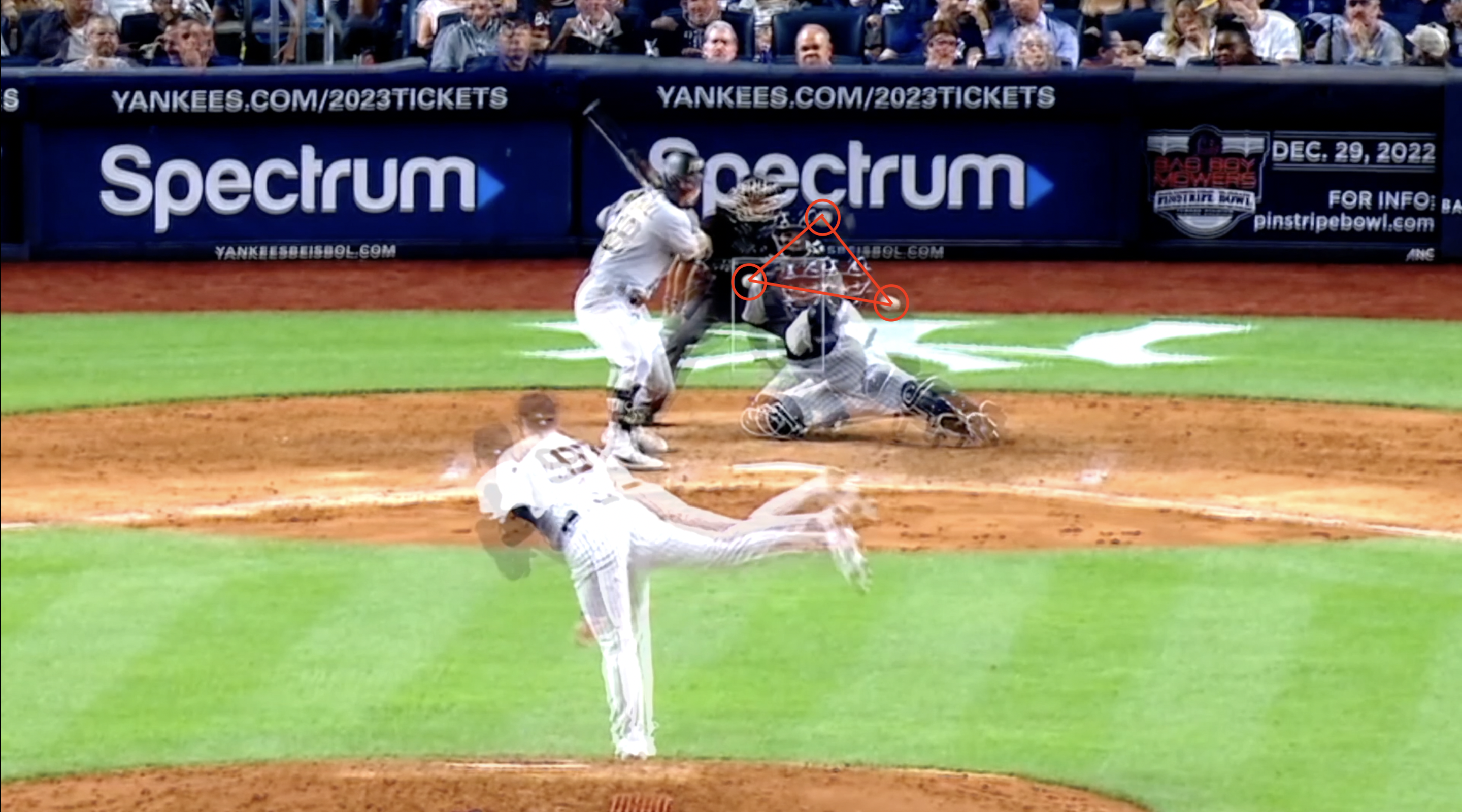 Rather than have to cover just a single vertical slice of the zone, the addition of the slider forces the hitter to cover a much larger area. When facing just the fastball and changeup, the hitter can zero in on a specific location on the x-axis once they read the trajectory of either pitch out of the hand (due to their similar horizontal movement profiles) and only has to worry about north-south. That’s no longer the case with the slider in the mix, as the hitter is now responsible for differences in both the x- and y-component.

The Yankees’ bullpen has faced some adversity and uncertainty after looking like an unhittable unit early in the year. With guys like Michael King and Chad Green going down for the season, Aroldis Chapman having the worst season of his Yankees tenure, and stumbles from Clay Holmes and Jonathan Loáisiga prior to the pair figuring it out of late, the Bombers will need to employ a true relief by committee approach with the postseason on the horizon. Ron Marinaccio will be an important weapon heading into the middle of October, and he can take things to another level by trusting the slider more.