The cautionary tale of Jordan Montgomery

Share All sharing options for: The cautionary tale of Jordan Montgomery

When the Yankees traded Jordan Montgomery to the Cardinals for Harrison Bader on deadline day, Yankees Universe collectively raised its eyebrows. Not only were they depleting their already-ailing starting rotation of a capable arm, but the player they were getting back was in a walking boot with a best-case scenario return date of mid-September. It was difficult to conceptualize an angle from which this trade made sense, and that’s even more the case six weeks later.

Montgomery was a perfectly serviceable starter for the Yankees, pitching to a sub-4 ERA in almost 400 innings prior to this season while his 3.2 fWAR in 2021 placed him in the top-30 of starters with at least 150 innings pitched. He began his 2022 campaign in a similarly solid fashion, pitching to a similar ERA (3.69) and FIP (3.91) as his career averages while doing a better job limiting the long ball, albeit with the worst strikeout rate of his career. In other words, exactly the level of production you’d be thrilled to receive from your third or fourth starter.

These numbers pale in comparison to what he’s achieved since arriving in St. Louis. In eight games with the Cardinals, Montgomery is 5-1 with a 2.05 ERA (190 ERA+), 2.45 FIP, and 44 strikeouts in 48.1 innings, doubling his season fWAR total in a third of the time. This stellar beginning to his Cardinals career vaulted him to the top-10 of starting pitchers during that eight-game span in most metrics, including FIP and fWAR.

So what were the Yankees missing? How were the Cardinals able to unlock this suddenly dominant version of Montgomery? Erin identified an uptick in four-seam fastball usage as a primary driver of Montgomery’s newfound success. Today, I’d like to look at some of the other changes in pitching approach that have allowed the former Yankees southpaw to thrive in red and white.

Even though Montgomery credits the four-seamer for his uptick in results, there is reason to believe that the performance of the pitch itself saw no improvement, but rather its increased presence exerted a synergistic effect on the rest of his arsenal. As Matt Blake pointed out, the four-seamer is actually Montgomery’s worst pitch. And moving from a division that crushes four-seamers to the light-hitting NL Central certainly helped. But pure and simple, the effectiveness of one’s secondary pitches (in Montgomery’s case, the curveball and changeup) depends upon one’s ability to establish the fastball in the zone. 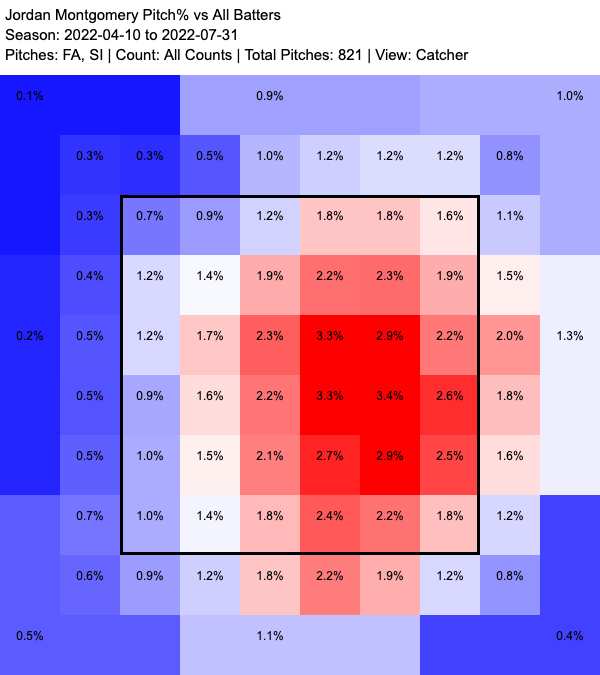 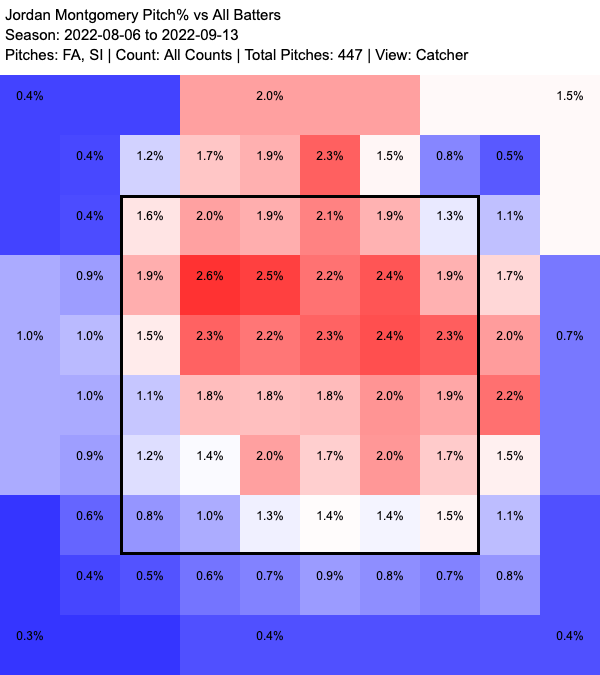 The biggest change for Montgomery has seen a fundamental shift in philosophy away from aiming to be a high-strikeout pitcher to a groundball pitcher pitching to contact. Rather than nibble around the edges and fall behind in counts, Montgomery is coming right after hitters, trying to get a batted ball as quickly as possible. Since moving to St. Louis, he’s seen his zone swing rate increase from 70.4 percent to 74.2 percent, his contact rate jump from 72.1 percent to 79 percent, and his chase contact rate skyrocket from 59.4 percent to 74.8 percent.

But wait, isn’t the goal to miss bats, rack up whiffs, and in general avoid contact? For pitchers with wipeout stuff, yes absolutely; however, not all pitchers can nor should be shoehorned into this idealized version of a starter. Not all pitchers possess the tools to run 30-plus percent strikeout rates and twenty-plus whiffs per game. Sometimes, a pitcher has to play to his strengths, and for Montgomery that’s limiting hard contact and inducing weak contact.

With the Cardinals, the lefty has increased his groundball rate from 46.4 percent to 53.4 percent while seeing his barrel rate drop with each successive start. This shift to pitching to contact highlights the importance of infield defense to a pitching staff’s success. St. Louis fields one of the best defenses in baseball — first in UZR (37.8), fourth in FanGraphs’ defensive runs metric (26.2) — but it’s the infield where they really shine.

The Cardinals’ infield paces the league in infield Outs Above Average (+23) and boast two of the top-five infield defenders this season — Tommy Edman placing second with +18 OAA, Nolan Arenado placing fifth with +14 OAA. Pitching with the confidence that the defenders behind you are going to hoover up any and all groundballs that come their way frees up a pitcher to attack the zone and confidently pitch to contact.

I do not write this to belabor the misstep of trading Jordan Montgomery to the Cardinals. There’s even a case to be made that the Yankees would be no better nor worse off had they kept him. No, I write this to spotlight two important points that I feel do not get enough attention. First is obviously the value of strong infield defense, both for its impact on the game but also for the psychological effect it can have on pitchers. Second, I continue to caution against pigeonholing pitchers into predefined templates. Let Montgomery serve as a cautionary tale for allowing pitchers to thrive within their given skillset, and taking the proper steps to maximize results once you’ve identified those strengths.