What to look for ahead of Gerrit Cole’s start tonight

Cole is dealing with a reoccurring mechanical deficiency.

Share All sharing options for: What to look for ahead of Gerrit Cole’s start tonight

I want to preface this article by saying I still think Gerrit Cole is very, very good. With that said, it’s important to approach the conversation of his struggles with some level of nuance. Is he still a bonified ace? Without question. Do I think his next start can be a gem? Absolutely. However, I am also concerned that he can blow up in a playoff game. In other words, the home run problem is a real issue.

You can try and make a stale argument by citing expected statistics or other similar metrics that say we shouldn’t be concerned, but in my opinion, that misses a key piece of information. Gerrit Cole loses his mechanics and fastball command from time to time and doesn’t always have the feel to make an immediate adjustment and avoid a big inning. We have seen it several times.

Do you all remember the beginning of 2020, when some were not happy with the Yankees ace? He also had a home run problem and command problem then. He was losing his torso posture after foot strike, and it led to him pulling fastballs and spiking breaking balls. It’s not something we had seen in his time in Houston, so it came as a bit of a surprise.

I wrote about Cole’s mechanical change during this initial struggle in the Bronx. Here are the main points from the analysis if you want to read a second article:

· His arm was dragging

These three points are all related. One mechanical change affects all others for rotational athletes especially. Any little tweak can disrupt the kinetic chain or help the kinetic chain. In terms of order of events of those points, it begins with the foot strike. Depending on the direction of his rotation at foot strike, a series of movements will follow.

The reason why people in the Yankees community aren’t always concerned with Cole is because his movement profile and velocity don’t ever change. In addition to that, his strikeouts and walks never falter. In other words, it’s hard to find reasons to say Cole is having definitive problems without diving into minor mechanical differences or fastball shape on an inning-by-inning basis.

This was my least favorite pitch from Cole in his blow-up inning against the Mariners. It’s not really the pitch sequencing that I’m concerned about. It’s the direction of his foot plant. It’s clear to me that when he strikes the ground, he is drifting over to the first base side a little too early. On this pitch, it resulted in a changeup moving across the middle of the zone.

Hitting the ground at the right angle is extremely important. If you’re falling over as you do it, your ability to decelerate the rest of your body and have a smooth transfer of energy gets out of wack. It can mess around with the direction and rotation of your arm. Arm drag distorts the release point or hand position, and in turn, the shape and location of your pitch. The final location wasn’t awful, per se, but this is moving right across the barrel path of any lefty hitter with a decent swing. 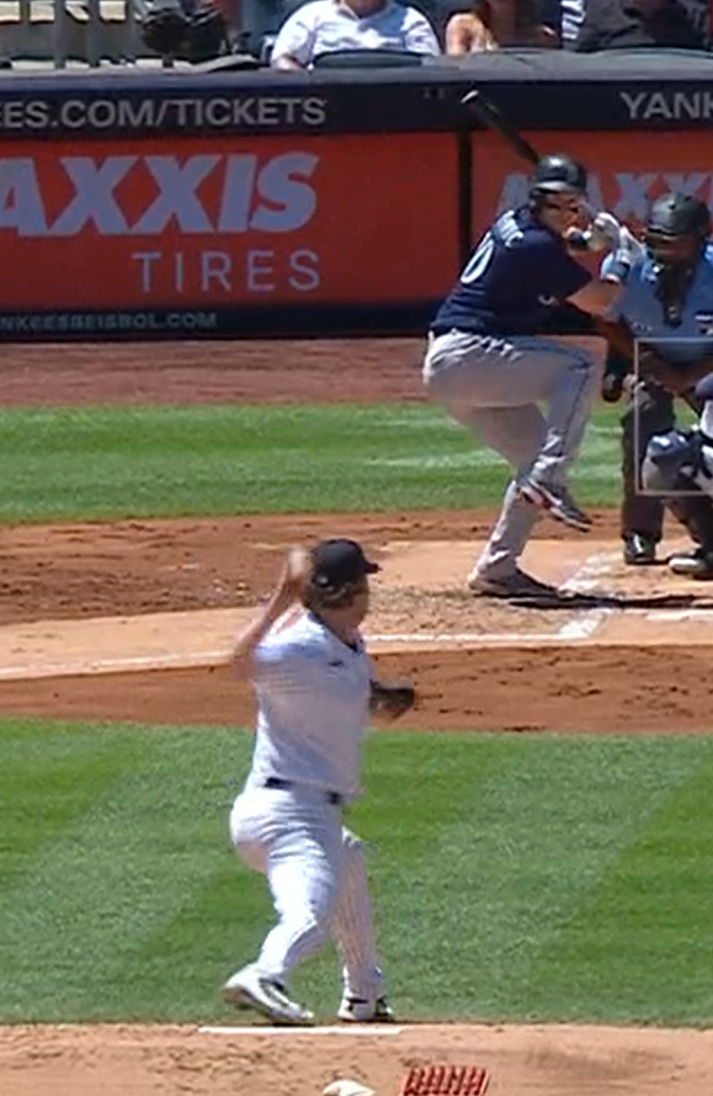 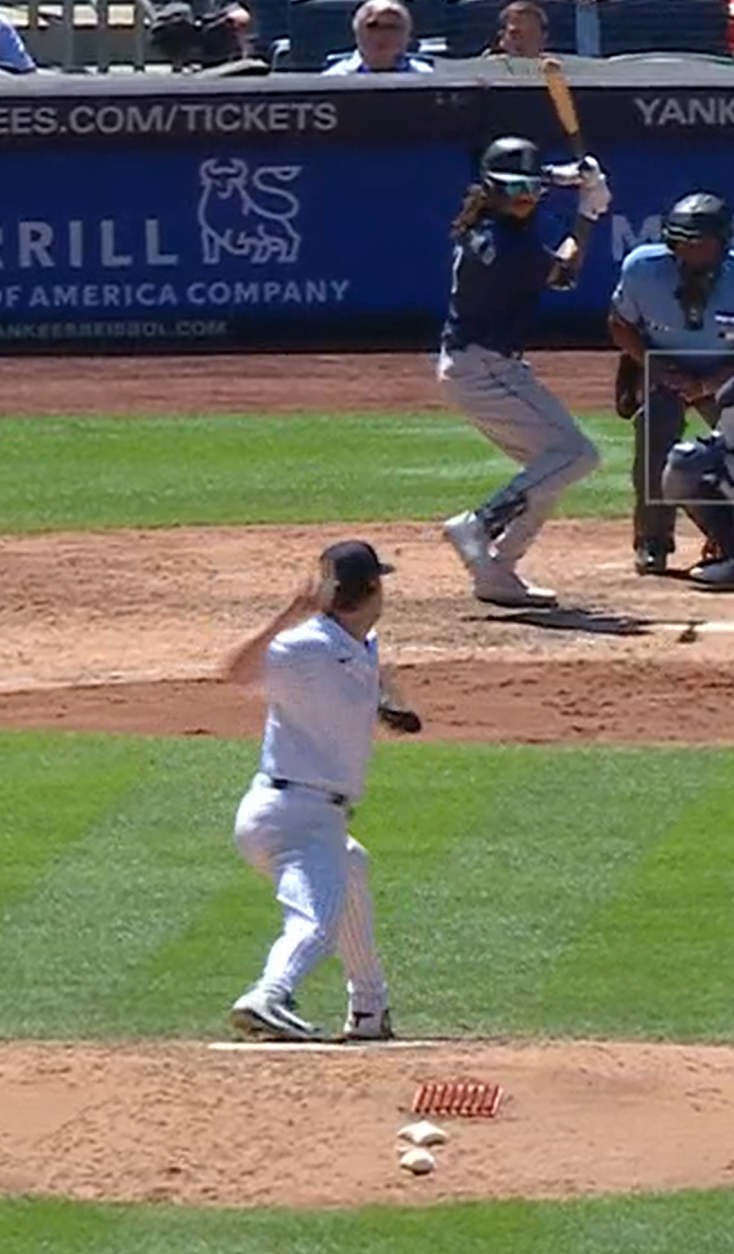 I don’t necessarily love using still shots for mechanical analysis, but I think it’s obvious here that his direction changed from the first inning to the fifth, when he yielded a whiff on a changeup against JP Crawford. Focus on the angle of his lower lead leg. From my perspective, it’s slightly more angled, rather than perpendicular, in the pitch against Crawford. If you don’t see that, then look at the angle he creates between his hamstring and calf. You probably could’ve guessed, but the changeup against Crawford was a better location, just a few inches lower than the first.

See what these slight differences can do to pitch locations? It’s a concrete example that Cole is more than capable of making quick in-game adjustments. His barrier this season has just been making them on the mound in the middle of an inning, or even an at-bat. It’s a mild concern only because a pitcher like Cole is more prone to the home run since he uses his fastball primarily up in the zone.

I know it seems like a nitpicking, but this is what you have to do to try and figure out why these blow ups happen. It’s easy to point to other run predictors or estimators and say “stop worrying about Cole.” That’s lazy, surface level analysis. Pitchers and hitters both get into ruts because of mechanics. Mechanics most often explain the ups and down of a season. The best players make those mechanical tweaks from pitch to pitch. We know Cole can do it; he just needs to get back in his rhythm. Like I said earlier, I’m not all that concerned, but that level of concern will absolutely increase if he doesn’t prove he can make these rapid-fire adjustments before season’s end.