Lou Trivino drastically raises the ceiling of the Yankees bullpen

Don’t let the ERA fool you. This guy is nasty.

Share All sharing options for: Lou Trivino drastically raises the ceiling of the Yankees bullpen

Frankie Montas rightfully generated all the excitement around Yankee-land when the swap with Oakland was announced, but Lou Trivino might end up as the steal of the trade deadline. His wipeout arsenal and past experience with success give him about as high a ceiling as any reliever likely to be dealt in the coming hours. Let’s peel back the curtain and take a look at exactly what the Yankees are getting in the 30-year-old righty reliever.

When it comes to the 2018 Oakland A’s bullpen, everyone remembers Blake Treinen’s near-invincible season, when he led all relievers with a minuscule 0.78 ERA and 3.6 fWAR. However, just as important to the dominance of that relief corps was the performance of setup man Lou Trivino, whose 2.92 ERA and .603 OPS against across 68 relief appearances held many a lead intact for Treinen to pitch the following inning.

It’s true that Trivino has failed to hit the heights of that campaign in the years since, and a superficial glance at his season to date — namely his 6.47 ERA — might lead some fans to question what he has left to offer the Yankees. However, we here at PSA know better than to rely solely upon ERA when evaluating pitcher effectiveness.

Digging deeper, it appears Trivino has fallen victim to some monstrous luck across his 39 outings in 2022. A .451 BABIP that is almost 200 points higher than his career average, an unsustainably high 20.8 percent HR/FB rate, a 2.92 xFIP, and a nearly 70-point increase from xwOBA to wOBA all point to Trivino being one of the unluckiest relievers in baseball. What’s more, a career-high 28.7 percent strikeout rate and career-low 8.9 percent walk rate suggest that Trivino is pitching at the highest level of his five years in The Show.

The sinker is Trivino’s most-used pitch and has the greatest untapped potential of any of his offerings. At times it exhibits the same demonic movement as Clay Holmes’ sinker.

The key for Trivino, just like with Holmes, is finding more consistent command of the pitch in the zone. Trivino struggles throwing it with a stable release point (kind of like what we’ve seen from Holmes during this recent dip in form). If he can iron out those release point issues, the results may be quick to follow. 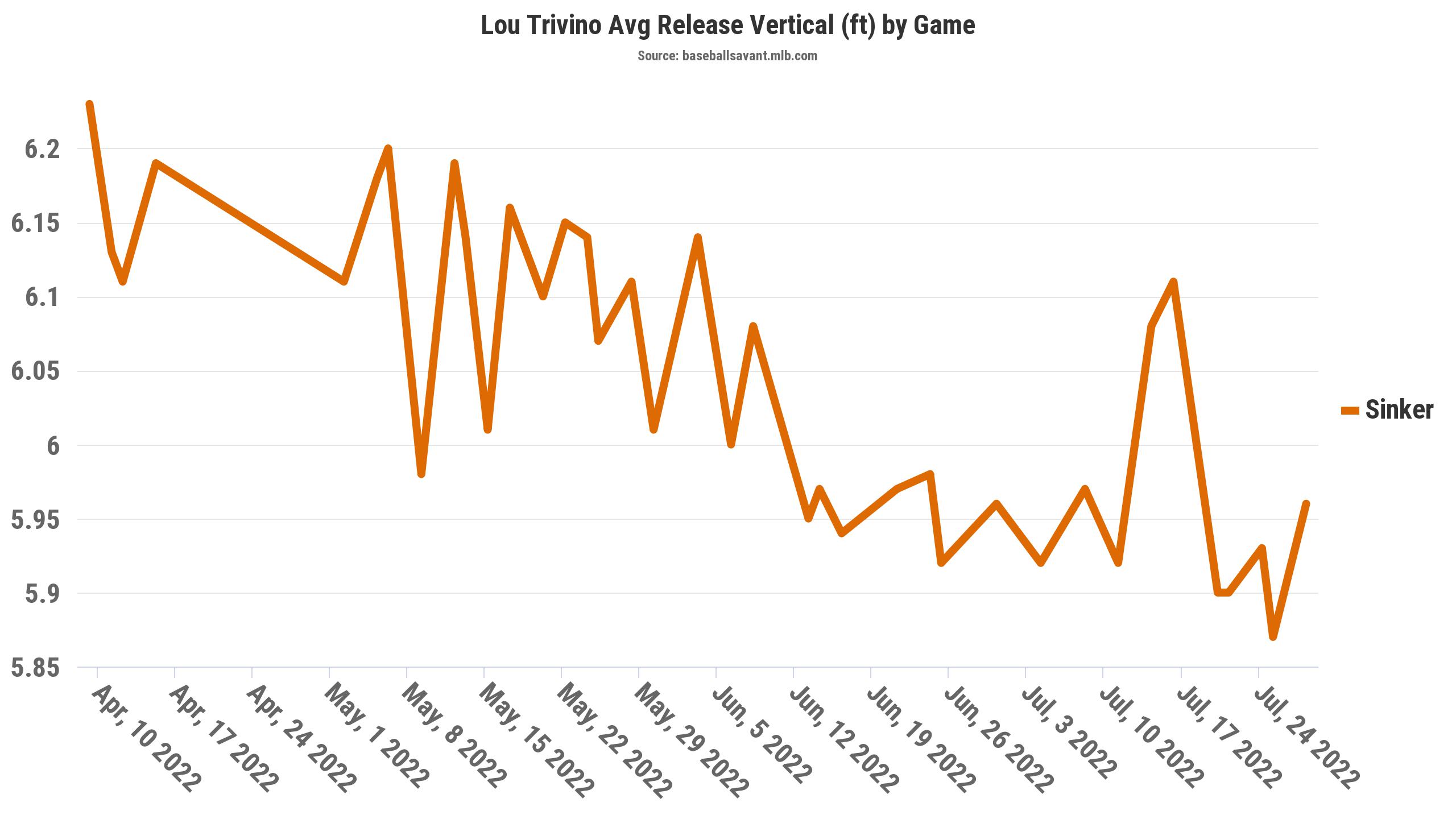 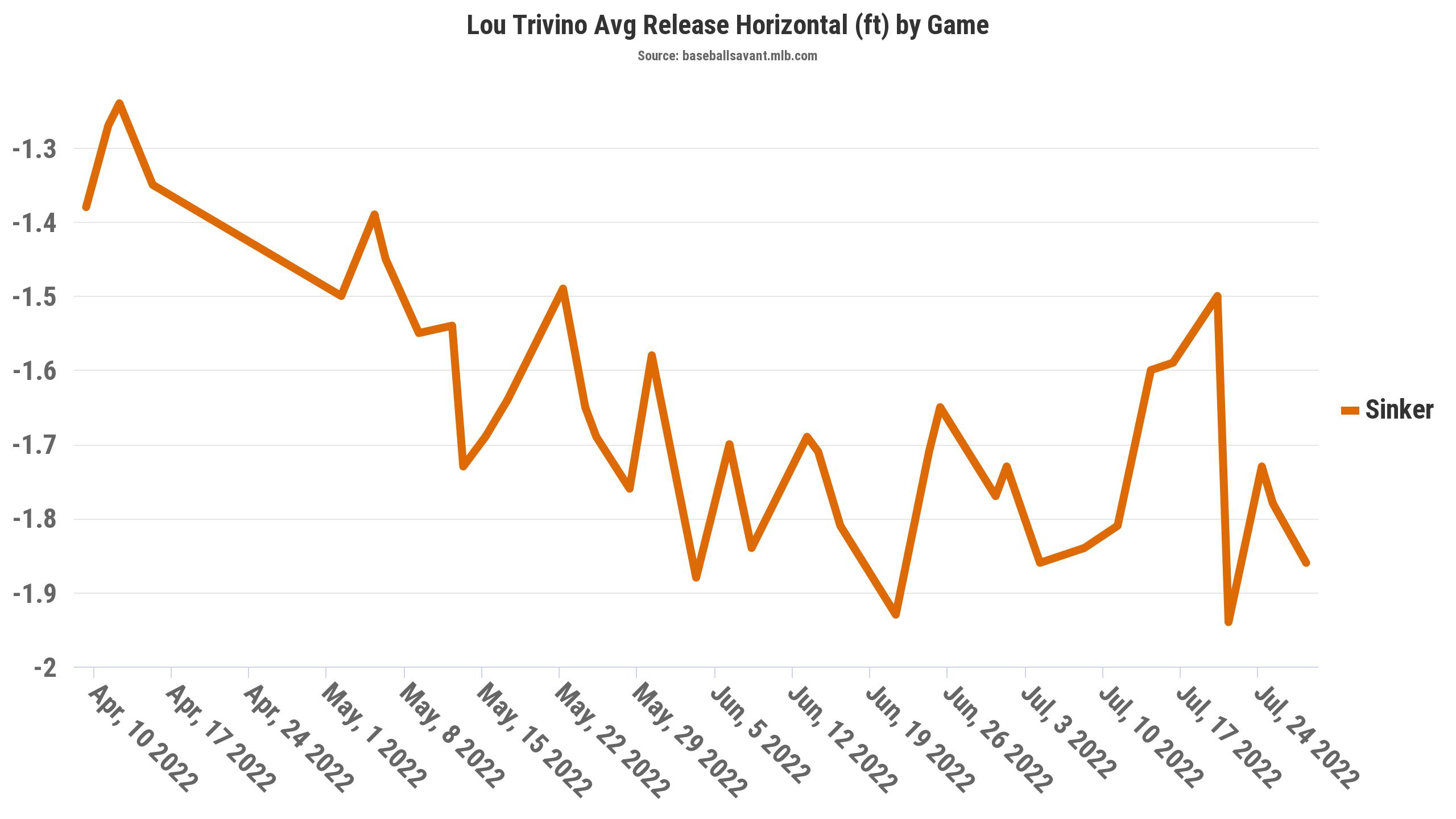 Then we have the changeup, a pitch I feel is Trivino’s most underutilized offering. It features the fifth-most vertical movement versus average of any changeup in MLB and induces a swing and miss at a healthy 36.7-percent clip. Despite these elite characteristics, Trivino throws it less than 12 percent of the time.

The weapon that most excites me is undoubtedly the slider. It’s actually a pitch Trivino threw for the first time in a major league game on May 23rd of this year. During his previous four seasons in the bigs, he threw an admittedly effective curveball, though for whatever reason, he didn’t trust the pitch enough to throw it much more than 10 percent of the time. Midway through the first half, it appears he redesigned the pitch into a sweeping slider, and boy is it a doozy.

Even though Trivino has thrown it a grand total of 101 times, it’s already one of the best sliders in the game. It’s got the ninth-highest whiff rate (54.2 percent) of any slider in baseball thanks to its frisbee-like horizontal sweep. His slider possesses the eighth-most horizontal movement versus MLB average, but what really makes it a unicorn pitch is its unique release points. You never see a pitcher with such a high arm slot able to impart so much sweep on their sliders — hitters are expecting it to break laterally only a certain amount based on their experience with pitchers throwing out of similar arm slots, but the pitch just keeps diving gloveside.

The sinker, slider, and changeup are a devastating trio upon which I expect Trivino to build the bulk of his success. He also features a four-seamer and cutter which on their own are not particularly dangerous weapons, but when used in concert with his other pitches find their potency magnified.

Trivino possesses an almost preternatural feel for pitch sequencing and tunneling. He understands how his pitches behave and how to pair the movement profiles of his offerings to enhance the effectiveness of all the weapons in his arsenal.

Here’s an overlay of Trivino’s sinker and four-seamer. The four-seamer flies a truer path to the plate with carry at the top of the zone while the sinker bears in on a righty’s hands. Think of the way that Alek Manoah uses his four-seamer/sinker combo to give varied looks with the fastball.

Trivino’s sinker and changeup form another dynamic pairing. Their horizontal movement profiles mirror each other during the entire flight to the plate. However, the changeup ducks below the plane of the sinker late, leaving the hitter insufficient time to alter their swing path. Luis Castillo achieves a similar effect with his fastball and changeup.

My personal favorite involves the violently divergent movement of Trivino’s fastball and slider. Both pitches start out of the same tunnel, but take hard turns in opposite directions mid-flight. Two pitches whose aiming points look nearly identical out of the hand wind up on opposite sides of the plate, sometimes separated by several feet.

Of course, there is still work to be done to get Trivino to the point where he’s executing these processes on a consistent basis. That said, I feel he is the perfect candidate to work alongside pitching coach Matt Blake, given the latter’s success in related areas with other pitchers on the roster.

The sinker and slider both exhibit robust seam-shifted wake effects, with Trivino able to tease unexpected movement given their respective spin axes. This gels perfectly with the philosophy that spawned the whirly slider revolution that swept the Yankees pitching room. Additionally, given Blake’s success at circulating the cutter around the Yankees pitching staff this season, I wonder if he could refine Trivino’s cutter into a fourth legitimate offering.

Lou Trivino is a perfect example of why we analyze the full spectrum of pitch metrics rather than come to a premature conclusion based on a couple unsightly top line stats. He boasts elite raw stuff in abundance, the next step is harnessing that into consistent results. And given the Yankees’ recent success at churning out high leverage arm after high leverage arm, I’m excited to see just how high his ceiling can reach.