The Yankees are pretty hard to watch right now, so I figured as a distraction we could bring back the long-dormant Separation series. Over the last few months, I’ve written about Luis Severino’s slider, Michael King’s four-seamer, Clarke Schmidt’s slider and four-seamer, and Wandy Peralta’s slider, and how all those pitches create separation off the movement profiles of the other pitches in their respective arsenals. Today, I’d like to talk about Jonathan Loáisiga’s slider.

Loáisiga was the Yankees’ undisputed bullpen ace in 2021, pitching to a 2.17 ERA (197 ERA+), 2.58 FIP, and 69:16 strikeout to walk ratio in 57 appearances totaling 70.2 innings, finishing tied for the third-highest fWAR (2.4) among qualified relievers in the league. He did this primarily with a sinker that had added two mph from the prior season, which paired with almost 20 inches of total movement allowed him to rack up the third-highest groundball rate (60.9 percent) among all pitchers with at least 70 innings pitched.

Then 2022 struck. Through his first 18 appearances this year, Loáisiga was the owner of an ugly 7.02 ERA, 5.09 FIP, and 13.7 percent walk rate (more than double the mark from the prior season), while allowing as many home runs (three) as he had in all of 2021. The sinker was getting punished, something my esteemed colleague Esteban Rivera immediately picked up on and ascribed to a slight alteration on his extension and release point with the pitch, causing it to break at the wrong time. Perhaps this was the result of a shoulder injury which ended up costing the reliever almost two months — suffice to say he’s looked like a different pitcher since returning.

Ignoring his first start back against the Reds when he allowed three runs while showing obvious signs of rust, Loáisiga has gone twelve outings with a 1.86 ERA and 3.11 FIP without surrendering a home run. Again, this is largely down to the performance of his sinker, which he’s throwing at a career-high rate (62.8 percent). However, he’s flashed a slider in recent outings that looks like it could be a game-changer.

Before we talk about this new slider, we need to run through the history of his breaking ball usage. He threw a curveball his first three years in the bigs, with excellent results in 2018 and 2019 before the pitch’s effectiveness fell off a cliff in 2020. Due to these struggles, he began throwing a slider in 2021 and has since upped its usages from 2.4 percent last year to six percent this year. Statcast believes that he still throws both a slider and a curveball, however Brooks Baseball disagrees, noting a complete shift from the curveball to the slider starting in 2021, and I tend to agree with this latter evaluation.

As the Lindsey Adler piece detailed, Loáisiga has experimented with the Yankee whirly slider that captured national baseball attention at the beginning of the season. It’s been a mostly inconsistent endeavor. Sometimes he snaps off a sweeper, but the majority look like this pair he threw to Tommy Pham.

There’s just not a ton of movement on either of these pitches. The first one is a cement mixer that Loáisiga is lucky to get back. The second has late downward tilt but virtually no lateral sweep to speak of.

The problem with this sort of spinning, Magnus drop slider is that it does not create enough separation off the movement profile of his sinker. I overlayed both sliders with sinkers thrown earlier in the at-bat to illustrate what I mean.

Even though the two pitches tunnel well toward the plate, the one-plane break on the slider means the batter only has to account for arm-side run on the sinker. The minute he identifies a lack of this movement, he can zero in on a specific horizontal segment of the zone as the landing area for the slider.

The next overlay is an even more egregious example.

Again, he’s able to achieve decent tunneling, but both pitches wind up in the zone. The lack of lateral movement forces him to throw a slider that is always over the plate in order to map to a similar aiming point with the sinker.

Then something unexpected happened against the Rays on Monday. Loáisiga unleashed three whirly sliders in a row to Jose Siri. I immediately clicked over to the Savant gamefeed to see if the pitch tracking data matched what I was seeing with my eyes, and indeed the sliders he threw that night exhibited four more inches of lateral sweep (and four more inches of vertical tilt to boot) than his season average with the pitch.

Before we get into the discussion of the new shape of his breaking ball, just look at the precision of command to locate these three straight pitches within inches of each other.

This added horizontal movement makes the slider a potent weapon on its own, but the real arsenal-boosting effect occurs when it’s paired with his sinker.

These two pitches leave his hand heading down the middle of the plate before taking abrupt turns in opposite direction about halfway to the batter. Thus, two pitches that look like mistakes out of the hand wind up out of the zone on either side of the plate.

This is a massive development for Loáisiga. With the old slider, it was a no-win situation. Because of the lack of horizontal break, he had to land the pitch in the zone in order to entice a swing. Conversely, if he wanted to locate the pitch out of the zone, he had to start it out of the zone, in which case the batter would never be tempted to swing.

Here are freeze frames from the two overlays taken from the Pham AB. The left-hand image in the slider is at the divergence point of the two pitches while the right hand image contains their respective endpoints. 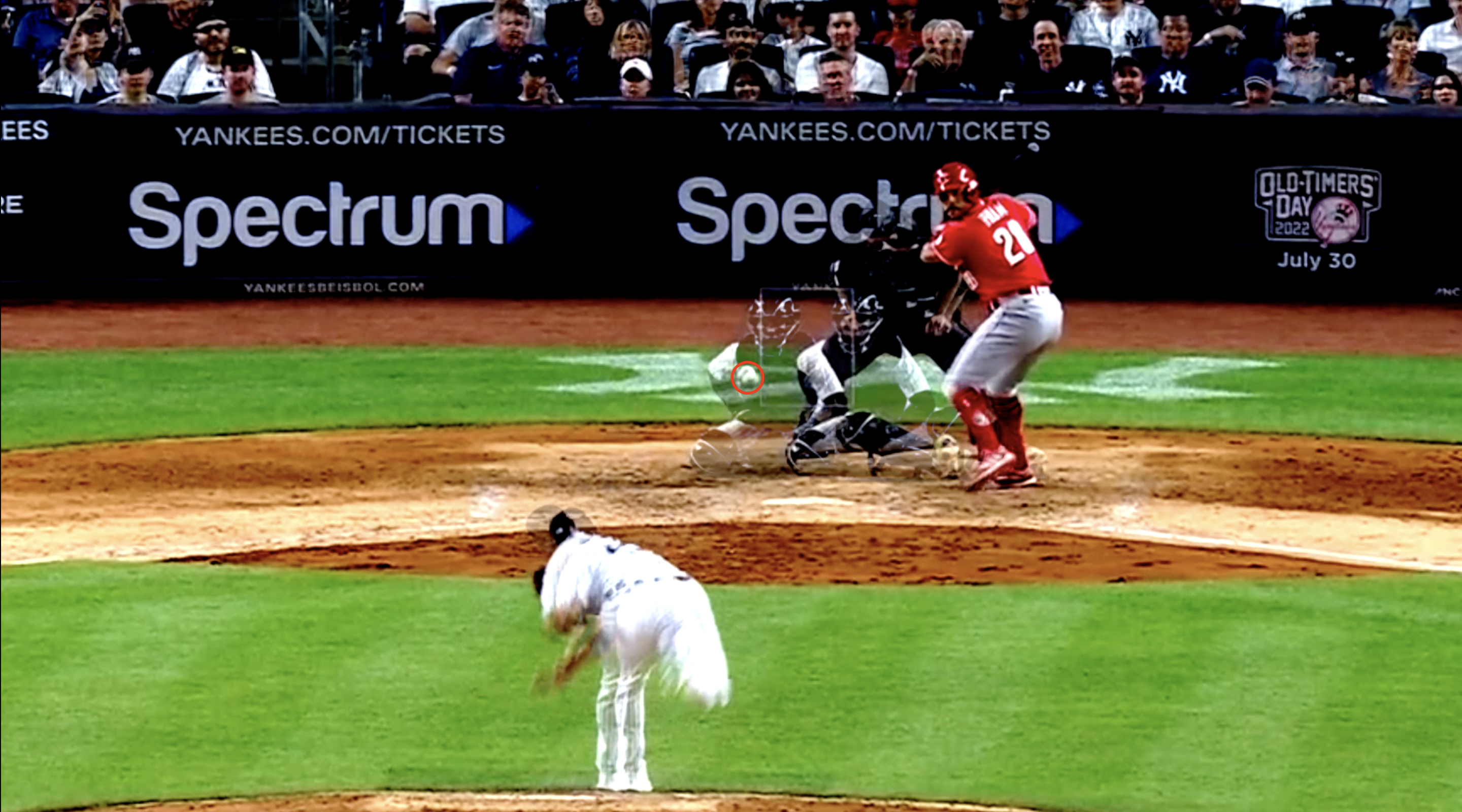 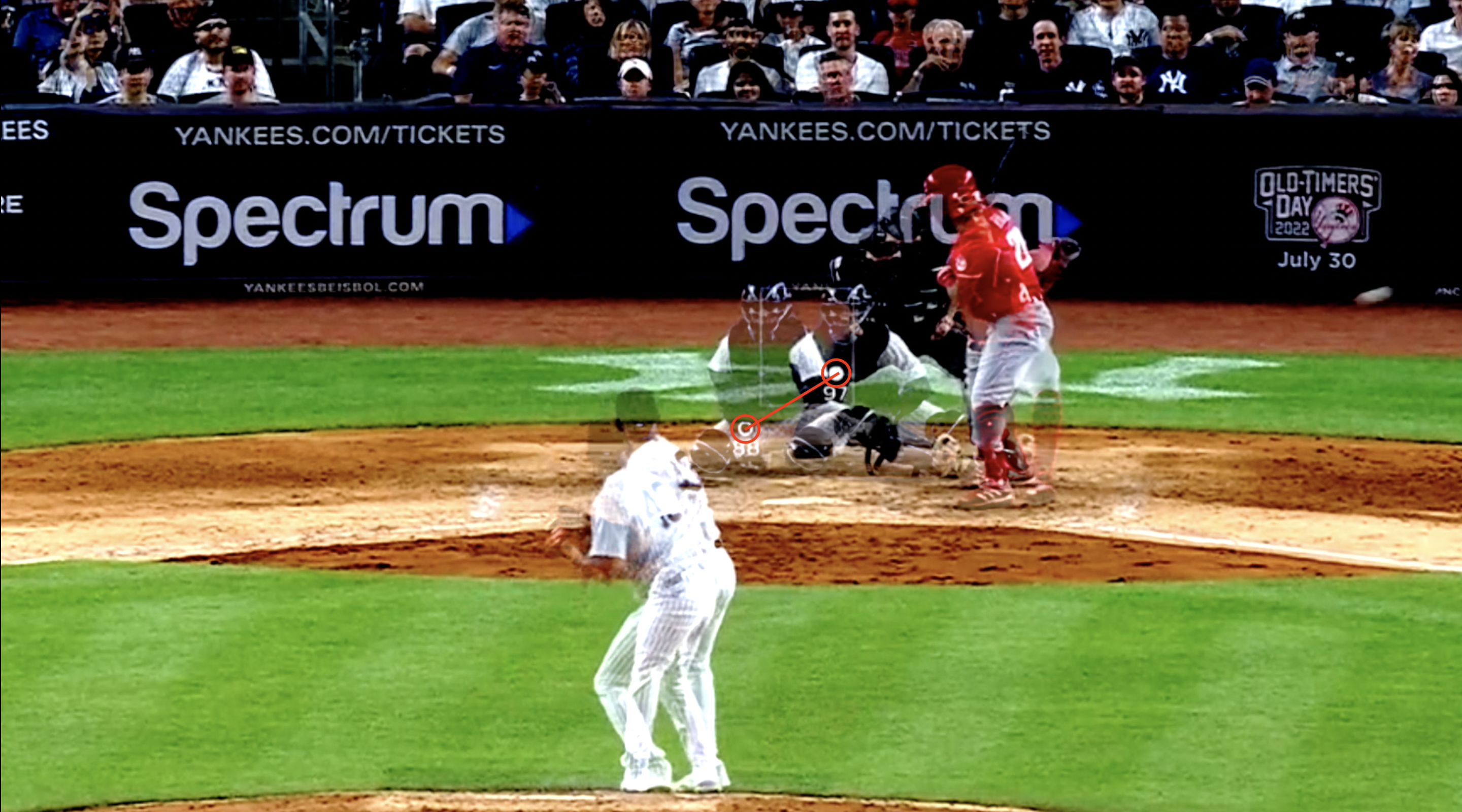 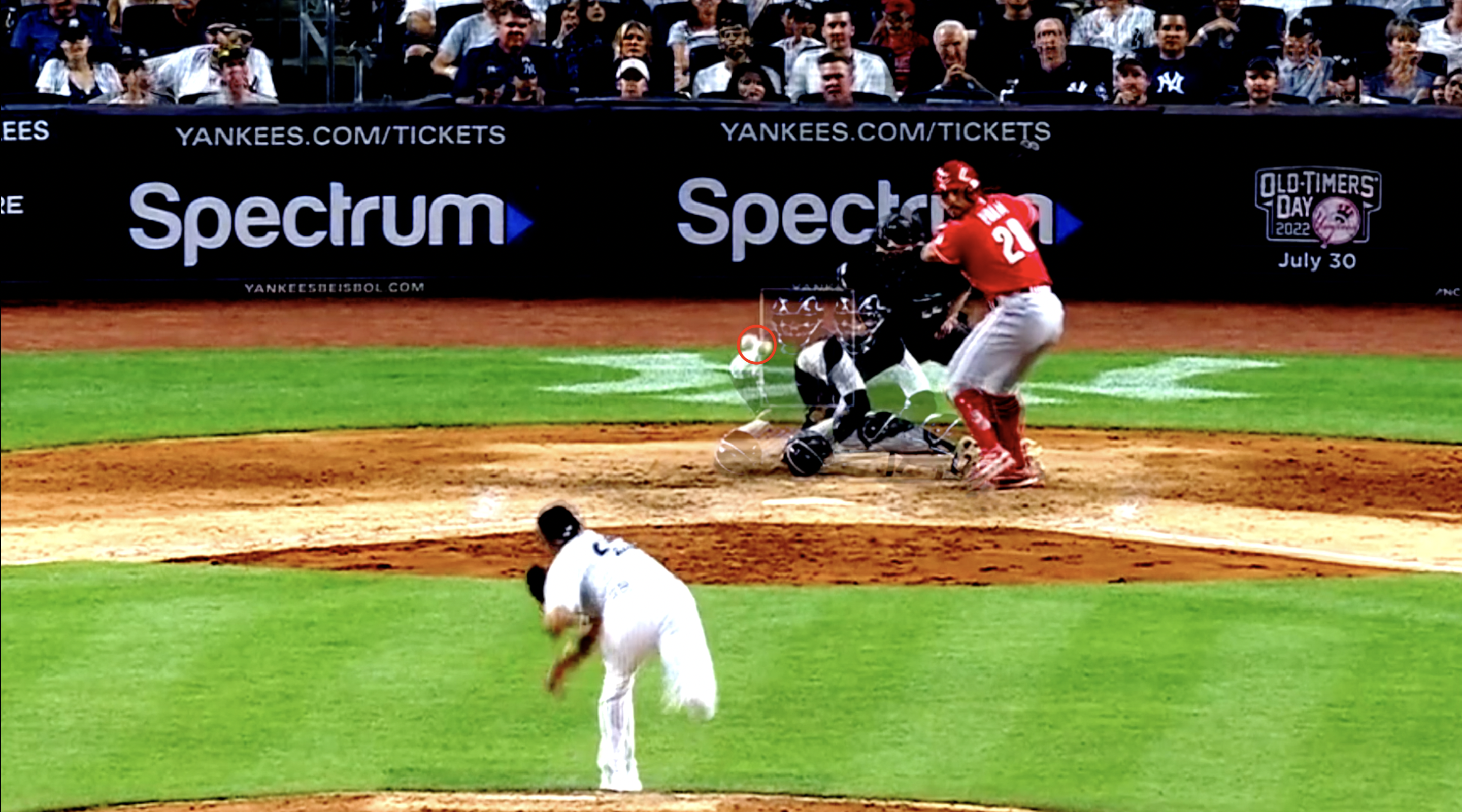 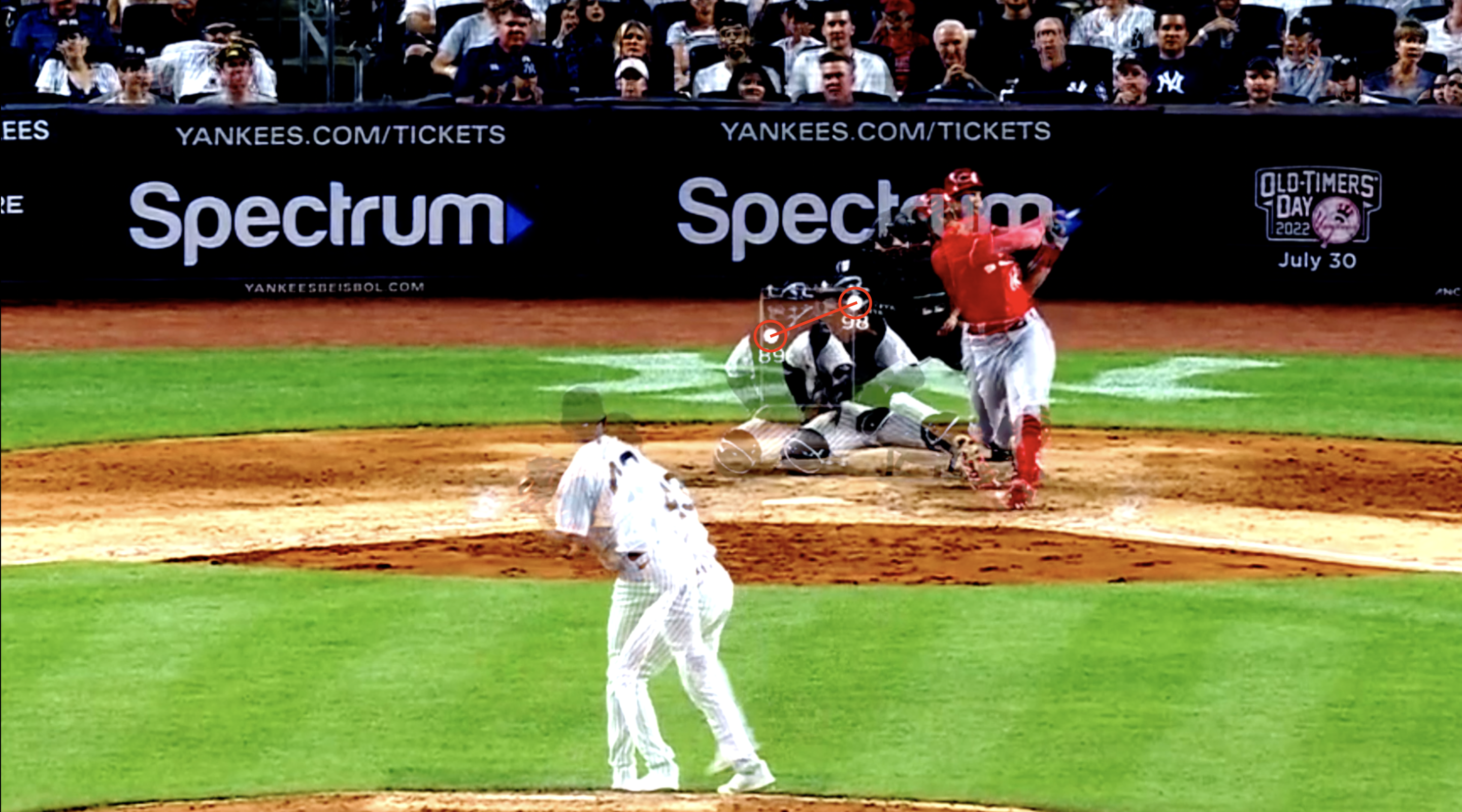 You can see the way Pham has to account for about a plate’s width of separation between the two pitches. Contrast that with this freeze frame from the overlay against the Rays. 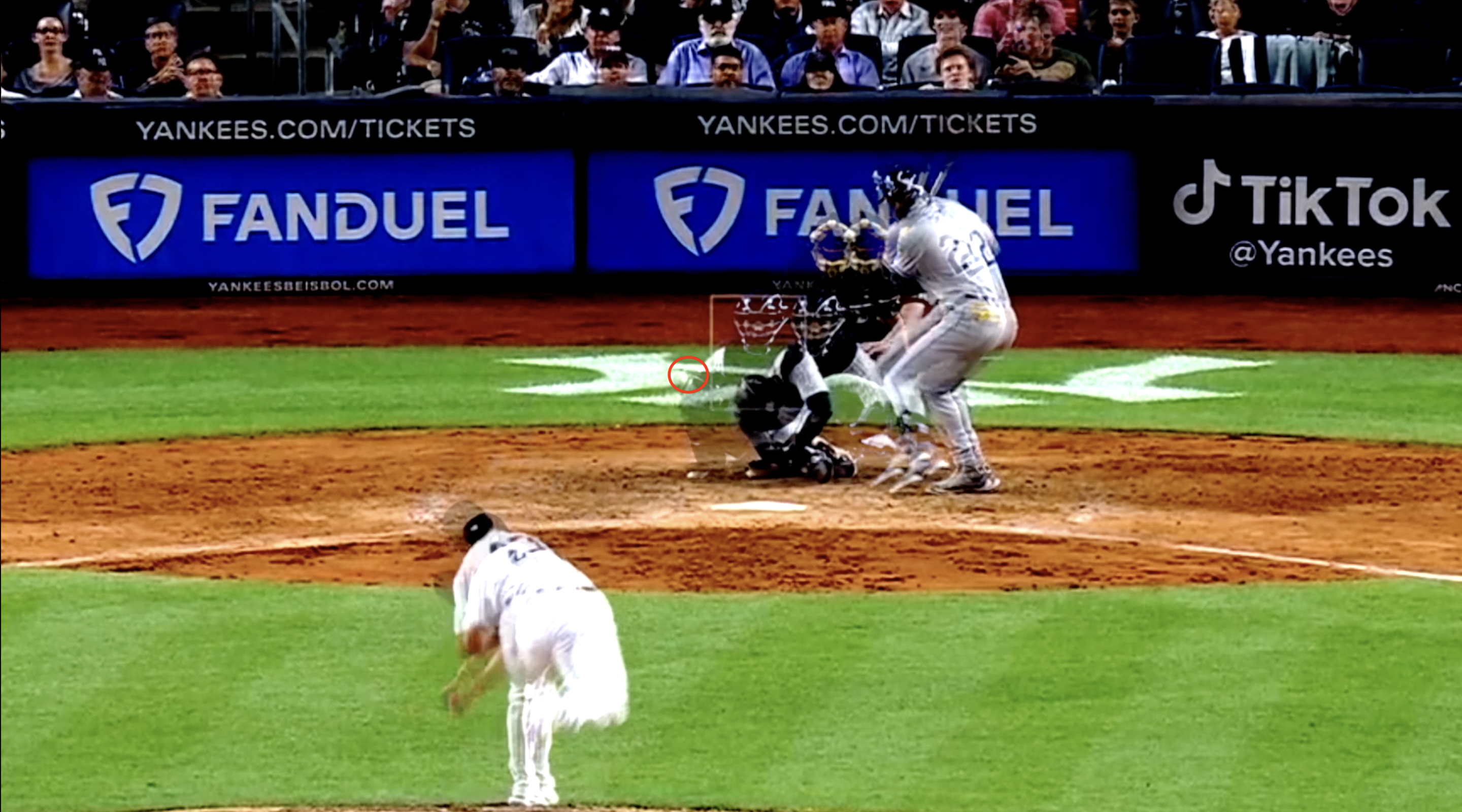 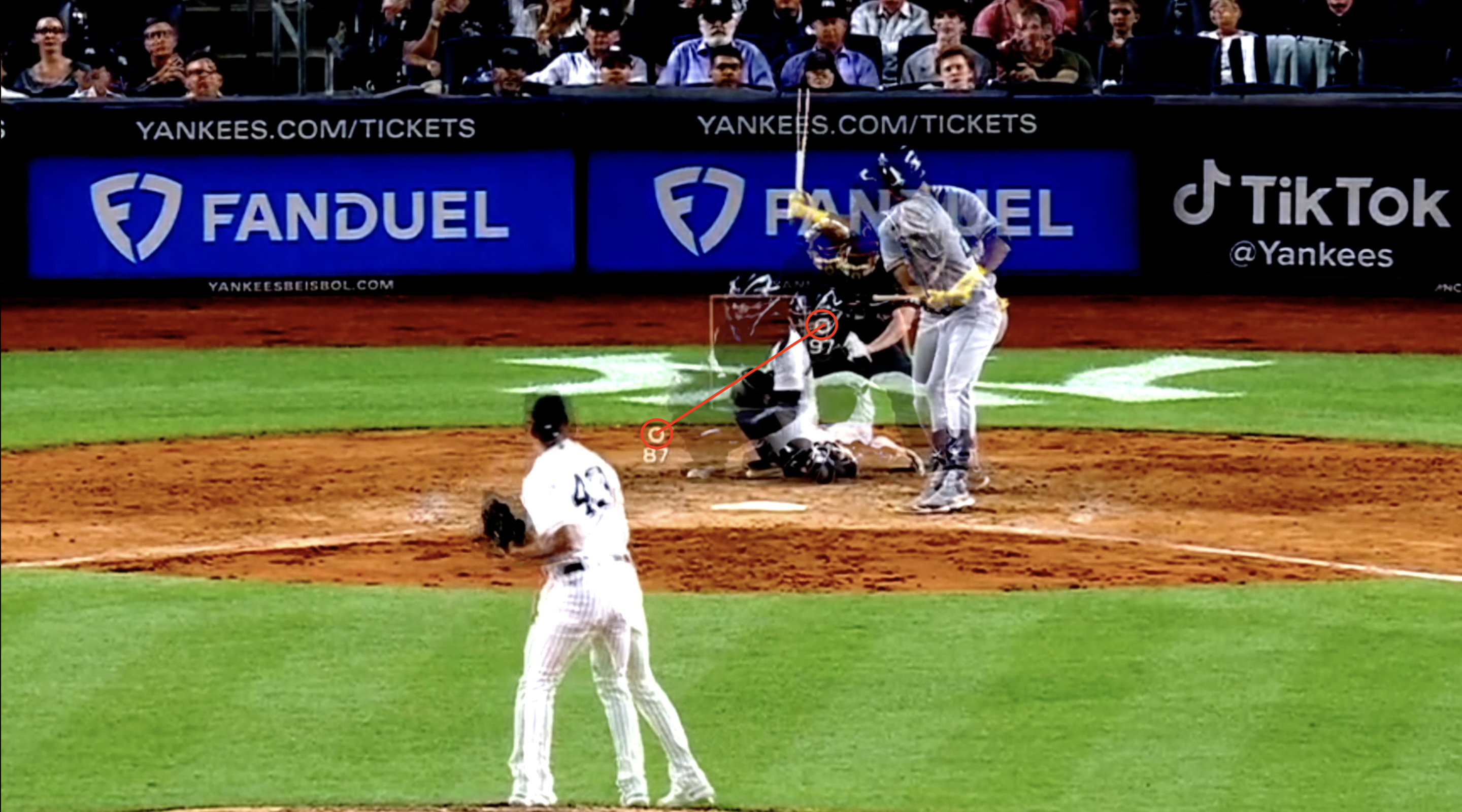 The hitter has to cover almost an entire extra plate’s width while also dealing with two pitches with two-plane movement instead of just the sinker.

The next step for Loáisiga is to find consistency throwing the whirly slider. If he can do that, I have no doubt that this newly rediscovered effectiveness will stick. And given the Yankees’ struggles with the closer role of late, including Clay Holmes heading to the 15-day IL with back spasms, Loáisiga just might force himself into the conversation to pitch the ninth.