Josh Donaldson’s been getting caught cheating at the plate

The former MVP can’t drive fastballs or changeups. What now?

Share All sharing options for: Josh Donaldson’s been getting caught cheating at the plate

I’ve lost track of how many times I’ve texted, Slack’d, or posted the above sentence in the past couple weeks. No, it’s not me remarking on my own mental health — although, sheesh — but rather Josh Donaldson, who’s triple slashed .222/.313/.373 in 2022, after coming over from the Twins in a deal that I thought the Yankees would come out ahead in.

Since returning from the IL June 3rd, that slash line has only gotten worse, a paltry .200/.262/.316, a team-worst .578 OPS in that stretch. His batted ball data has taken a pretty significant step backward, going from the 90th percentile in hard hit rate, exit velo, barrel rate and walk rate down to the mid-70s percentile ... but that’s not .578 OPS bad.

Donaldson’s problem is less what happens when the ball is put in play, and more around how inefficient his swing decisions have been.

So, it’s not great. Donaldson’s swinging at more pitches out of the zone, and making contact less frequently when he swings, than at any time in his MVP and post-MVP career (last night’s homer on a curve notwithstanding). One of the things that made me so optimistic about Donaldson was his plate discipline and the control he had over his swings — he just didn’t offer at pitches he couldn’t drive. He’s started to do that, his K-rate is way up as a result, and when he does make contact, it’s on pitches he can’t do damage with. 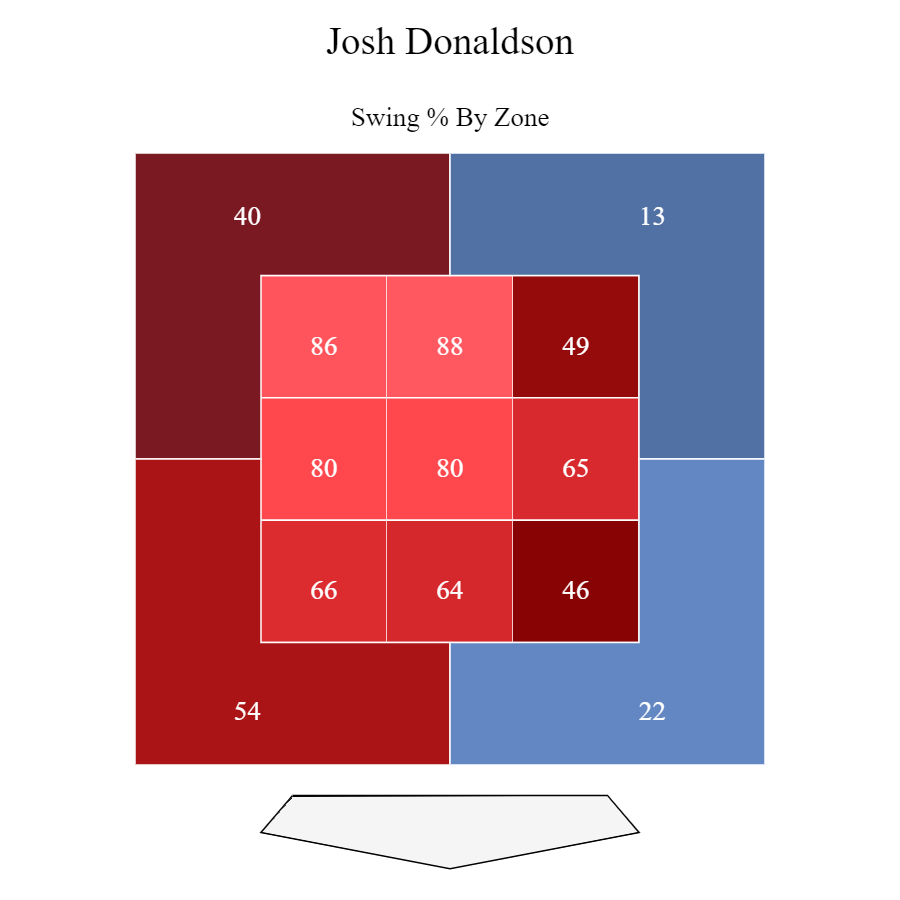 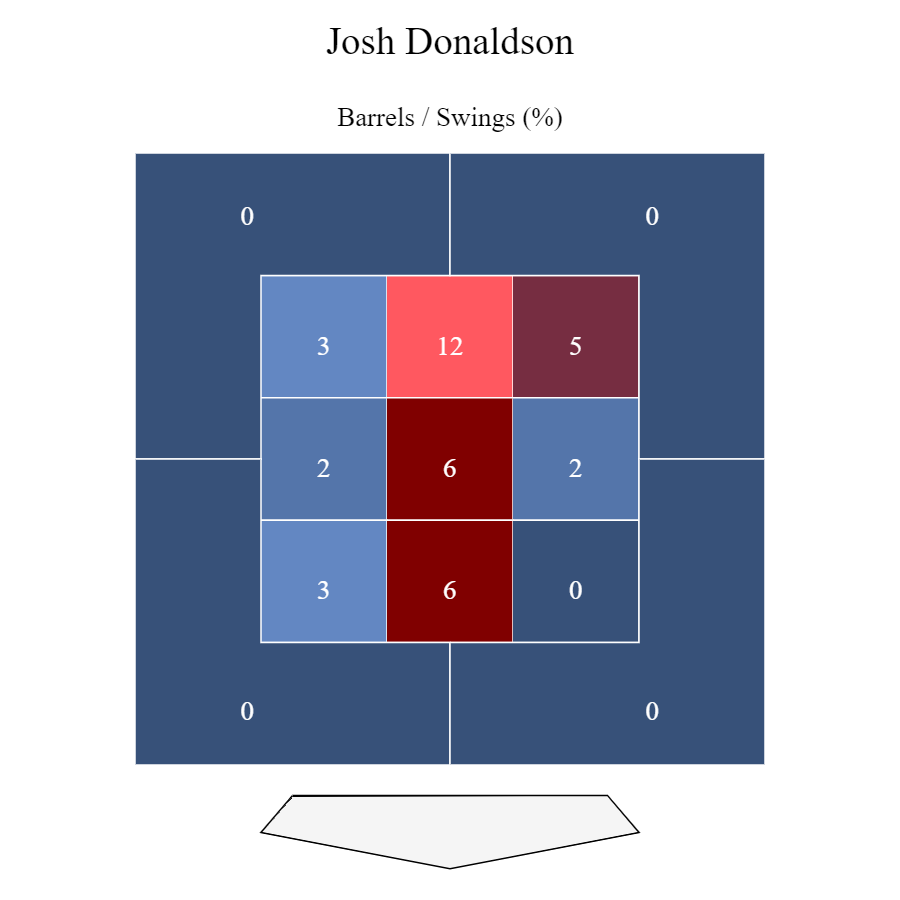 You can see here that Donaldson has really struggled to lay off inside pitches, and those are pitches you just can’t hit with authority. Look at his barrels by zone — when he’s hit the ball well this year, it shouldn’t be a surprise that good contact has come on balls he can extend on. He doesn’t have a Derek Jeter, inside-out style swing to bring the head of the bat around on inside pitching like this, so if he swings, he either misses, which he does more and more, or its a nothingball.

Perhaps more frightening, there seems to be a book on Donaldson. He’s seen more fastballs than any season other than 2014, and more changeups than any season but his rookie season, and less of every other pitch type than he ever has before. The approach seems to be get ahead with heat, put him away with offspeed. This shouldn’t work for a guy who has such an intimate knowledge of the science of hitting, and yet, it is.

Let’s look at this in real time, against a guy with a fine, but not great fastball, Yusei Kikuchi. Kikuchi’s not the kind of pitcher worth writing home about, but he will sit about 95 with the heater:

This is not a strike, Donaldson both chases out of the zone, and he starts so early that he whiffs, the two things currently cratering his season. A couple fastballs later ...

Now, Statcast has this pitch as a changeup, Dan Shulman calls it a splitter, but the result is the same. Kikuchi takes a little bit off, Donaldson is once again early, strike three, inning over, Anthony Rizzo is left stranded.

Josh Donaldson is cheating on fastballs, and that leaves him particularly exposed to offspeed stuff. If he was crushing fastballs, you could live with it, but after posting a .408 wOBA against heaters in his career, that’s dropped all the way down to .342 this season. Offspeed stuff, he had a .326 wOBA against for his career, and now that number sits at .326. He’s a little worse against curves and sliders too, but the dropoff isn’t nearly as dramatic as his inability to drive heat or cold.

I don’t know what the cause of this is. Cheating can be a function of a lot of things — if a guy’s really pressing, he can start his swing too early. If he’s hurt, he might sacrifice some contact just to be competitive without aggravating the injury. If he ages, and loses bat speed, he might start to cheat because he knows his old timing mechanisms don’t work anymore.

Josh Donaldson is a hypercompetitive 36-year old who’s already missed time this year with a shoulder problem. He could fall into one, two or all three of the above buckets. We have really great insight into what’s wrong with Donaldson, but not much into why. That’s the Yankees’ purview, and they’re going to have to figure it out. When Josh Donaldson was productive for stretches this season, this offense was booming. Without him, an often top-heavy lineup gets even thinner.

All statistics are as of the end of play on Tuesday, July 5th.