Brian Cashman cannot pass up this once in a blue moon opportunity.

On Tuesday, Ken Rosenthal of The Athletic dropped a bombshell report that the Tigers were willing to listen to offers on “just about everyone,” including star pitcher Tarik Skubal. It is exceedingly rare that a pitcher with under two years of major league service time in the middle of a breakout season becomes available. He instantly joins Luis Castillo and Frankie Montas as the gems of the starting pitching market with the trade deadline just five days away.

Skubal has leveled off some in the intervening starts, though there is some evidence to suggest this is due to bad luck. The 1.02 point drop-off from his ERA to FIP represents the second-largest delta of any qualified starting pitcher this year. Even with that slight downturn in form, Skubal still owns the 11th-highest fWAR of any starting pitcher so far, and gives up the 12th-lowest HR/9 (0.76) of that cohort — pretty remarkable when you consider he gave up the worst HR/9 (2.16) of any starter with at least 170 innings between 2020 and 2021. Since his big league debut two years ago, he owns the 20th-highest strikeout rate (26 percent) of any starter with at least 250 innings. And the way he got there is why Skubal is one of my favorite young pitchers in the league.

I love Skubal’s story. He’s a prime example of why not to give up on a top prospect when they don’t have immediate success in the bigs. I view him as kind of the anti-Joey Gallo. Instead of saying “this is the player I am,” he constantly tinkered and refined and is reaping the rewards.

During Skubal’s first couple years in the league, he tried to overpower hitters with a 94.5-mph fastball — the third-fastest average fastball velocity among lefty starters — saving his slider, changeup, and curveball almost exclusively for putaway situations. Sure, the velocity was impressive, but without other top-of-the-line pitch characteristics — rise, vertical approach angle, etc. — hitters are going to adjust to the pitch when they see it almost half the time. That’s exactly what happened, with the pitch getting crushed to the tune of a .409 xwOBA (for reference, that’s just 31 points lower than Aaron Judge’s xwOBA for the season).

So Skubal made the adjustment, and is now featuring the four-seamer just over a quarter of the time, shaving over 100 points off the pitch’s xwOBA. The flip side of that adjustment is that Skubal had to feature his other pitches more — namely the slider and changeup — neither of which were plus offerings. Again, he experienced some growing pains, yet each time he was faced with new adversity, he got to work turning his weaknesses into strengths.

We’ll start with the slider. In 2020 and 2021, Skubal was throwing a sweepy slider that was sort of a discount version of the whirly sliders in the Yankees’ org. It wasn’t a bad pitch per se; just nothing special. This year, he’s throwing it about three miles per hour harder, and with less movement. 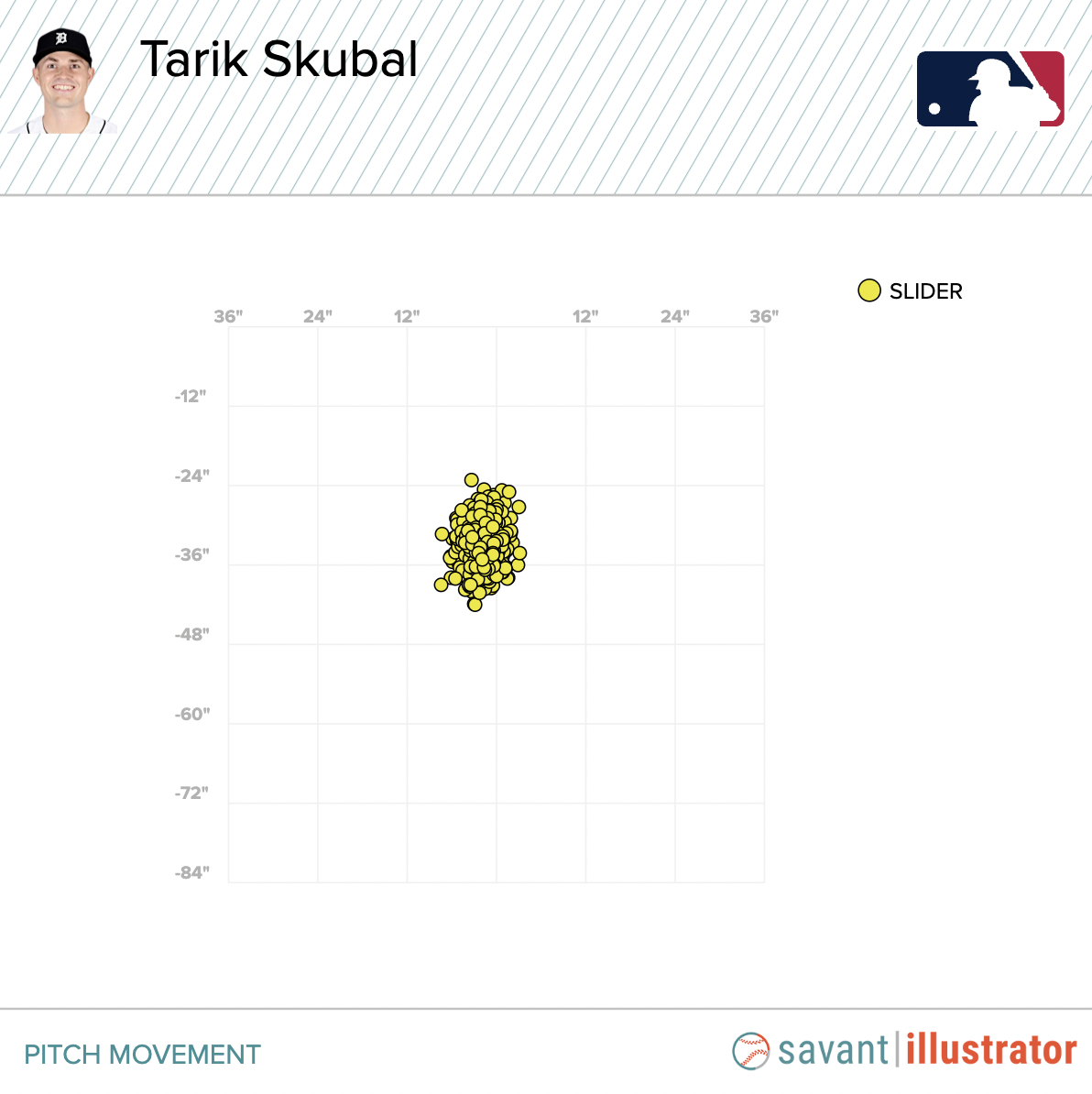 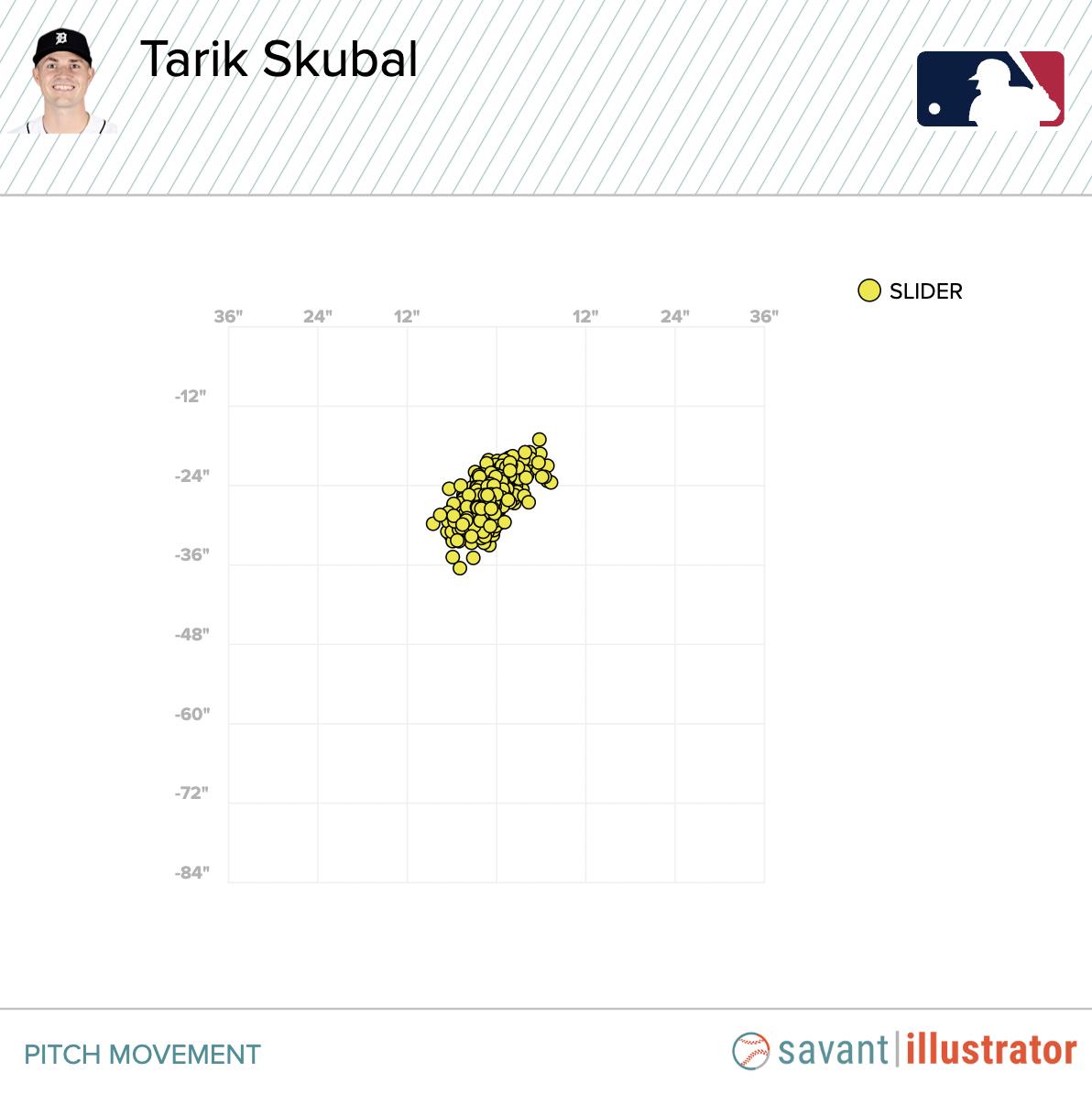 Skubal now throws the slider more than any other pitch — just over a 31-percent usage rate. He’s throwing it in a broader array of counts, and because of the reduced movement, he is able to command it to the point of throwing it confidently in the zone for strikes. All of this has the effect of boosting the effectiveness of his four-seamer, as hitters now have to respect both pitches in any count and to any quadrant of the zone.

I feel like this is a good time to remember that there are few if any absolutes in baseball. We’ve become conditioned to believe that more movement = good. In most cases, that holds true, but as we see in Skubal’s case, the trade-off of movement for command turned his slider into a real weapon. It’s a welcome reminder that there is no one-size-fits-all approach to pitching.

That brings us to Skubal’s changeup. In his rookie year, the offspeed was a mediocre pitch, clocking in at a .362 xwOBA. He spent that winter at Driveline Baseball working to improve the offering, and they came up with a Lucas Giolito-esque straight change that tunneled well with the four-seamer when thrown up in the zone. He saw immediate results — .217 xwOBA — but wasn’t quite satisfied. He toyed with a sort of hybrid vulcan grip split-change learned from teammate Casey Mize, but quickly scrapped the pitch because frankly it stunk. Then something magical happened to Skubal’s changeup this past offseason. 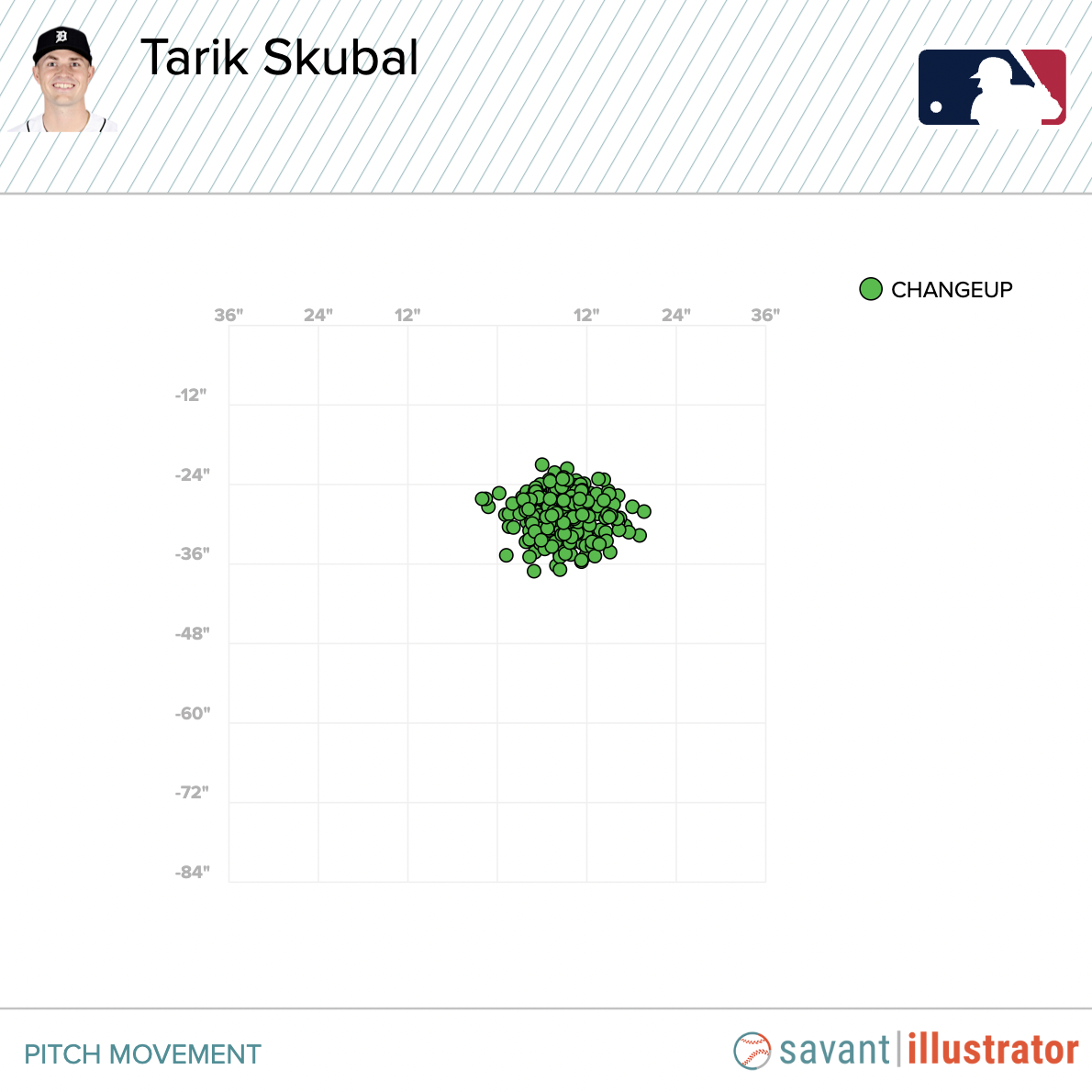 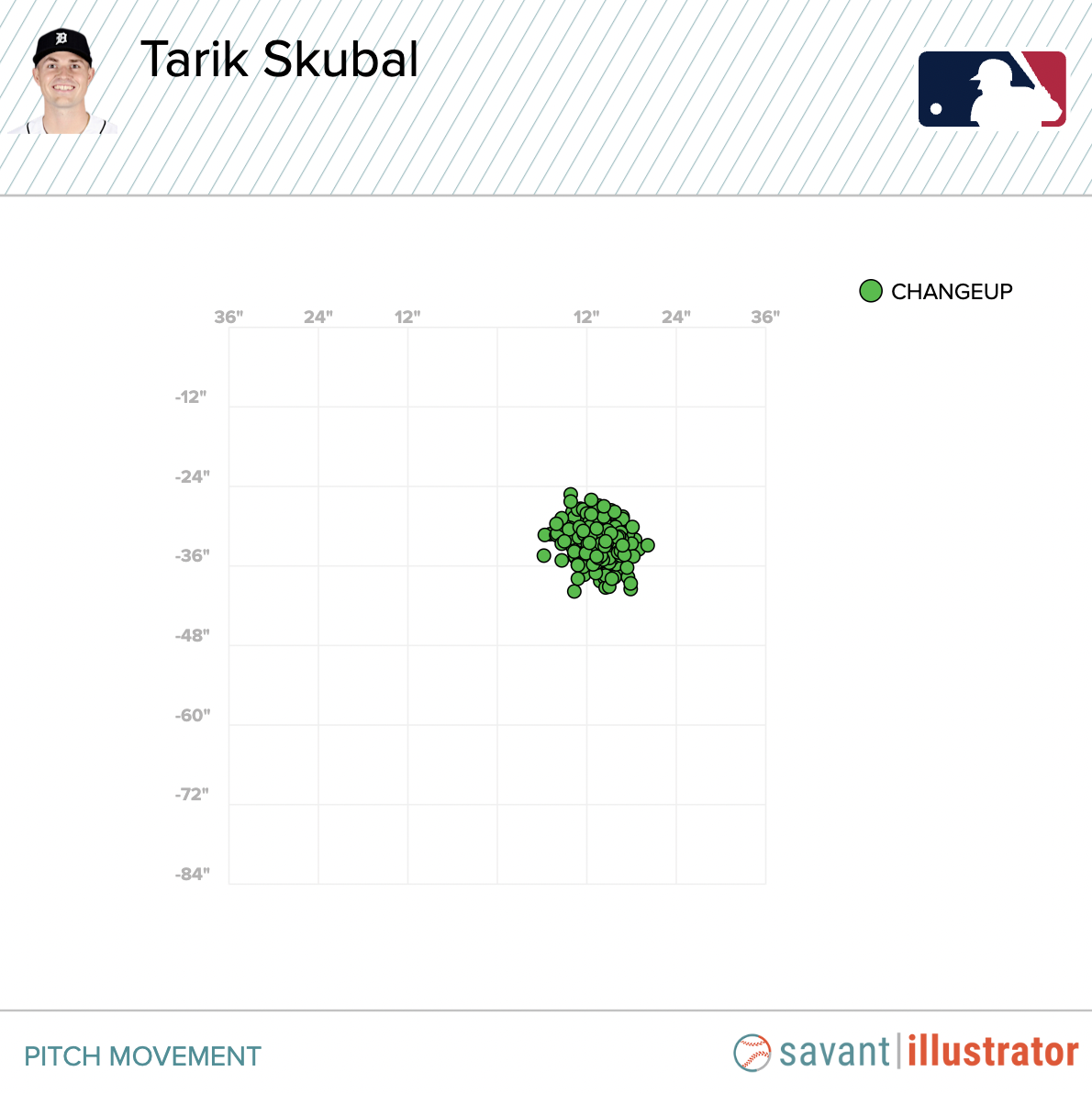 The Tiger has added roughly four inches more sink and just under five inches more armside fade relative to the changeups he was throwing in 2020 and 2021. The results have been night and day. The changeup is now Skubal’s best pitch, inducing a 46.9-percent whiff rate alongside a 29-percent putaway rate, both top marks of any pitch in his arsenal.

Of course, it won’t be cheap to acquire the 25-year-old lefty. Skubal is under team control through 2026 and is making close to the minimum this year and next. You just don’t find a young controllable starting pitcher with his upside on the market very often. From the Tigers’ point of view, it seems like such a knee-jerk reaction to having a crap season that everyone saw coming from a mile away. I’d imagine any offer would have to begin with an organization’s top overall prospect, and even then, that might not be enough.

Even at such a prohibitive cost, the Yankees should be all over this. Skubal’s willingness to learn and ability to translate adjustments into on-field results fits the blueprint of Matt Blake and the rest of the pitching dev staff like a glove. In particular, Skubal’s aptitude at tweaking the shape of his slider and changeup are two things Blake has thrived at implementing across the Yankees pitching staff. This feels like a match made in heaven and makes one wonder just how nasty Skubal could be in the Yankees’ hands.