Clarke Schmidt has added separation between his slider and curveball, giving him two distinct strikeout weapons.

Share All sharing options for: Clarke Schmidt learned the whirly slider to create separation off his curveball

Only two years ago, Deivi García and Clarke Schmidt were heralded as the future of the Yankees starting rotation, making up two-thirds of the team’s top-three prospects. And while the former has faded into obscurity in the minors, Schmidt is knocking on the door of a permanent major league role. Though for now that role appears to be as a multi-inning reliever, Schmidt’s growth in certain areas put him on track to perhaps one day be a starter for the Bombers.

One such change that I’ll be exploring today involves the shape of his breaking pitches. Coming up through the minors, Schmidt’s was always touted for having a devastating curveball with elite spin. We got glimpses of the pitch in spring training, some of which eclipsed the rarified 3,000 rpm spin rate, but have yet to see Schmidt really leverage the pitch to his advantage in the majors. But that could be about to change.

Schmidt learned a slider last season, augmenting his repertoire with another breaking pitch to keep hitters honest and prevent them from zeroing in on the curve. The problem is it wasn’t a very good pitch. Like, at all.

That is the definition of a cement mixer, and Schmidt was lucky that Alonso was too surprised to pick the bat up off his shoulder. It had negligible side-to-side movement and a sort of lazy break down toward the heart of the plate.

Fast forward a year and it looks like Schmidt is another one of the Yankees pitchers to have learned the whirly slider sweeping the staff. His slider is a completely different pitch compared to last year, adding roughly eight inches of horizontal run and eight inches of vertical tilt.

Here is a perfect example of the redesigned pitch, executed to perfection to strikeout Mike Trout:

You can see the way it dives down and away from Trout. In addition, that break is later and sharper, giving the hitter much less time to react. Not only does this added movement make the slider better, but when paired with his curveball creates much-needed separation in their movement profiles.

Here are some overlays to show you what I’m talking about. This first one is an overlay of Schmidt’s knuckle curve and slider from 2021:

See the way those two pitches stay in phase with one another? By that I mean their movement profiles do not diverge off the same vertical plane. They stay in line on the way to the plate and only the difference in drop creates separation between the two pitches (not to mention the slider never really budges off its initial trajectory toward the plate, making it that much easier to track and predict where and how it will enter the hitting zone).

Compare that with this pair of overlays of knuckle curve and slider from 2022:

The two pitches tunnel well initially out of the hand, as Schmidt does a good job maintaining a similar release point for the two pitches. About halfway to the plate, they diverge drastically. The curveball continues it’s downward trajectory, but the slider takes a left-hand turn and darts gloveside.

To illustrate why this is so important, I’ve taken freeze-frames of the hitter’s decision point and the point where both pitches crossed the plate. Below is taken from the 2021 overlay: 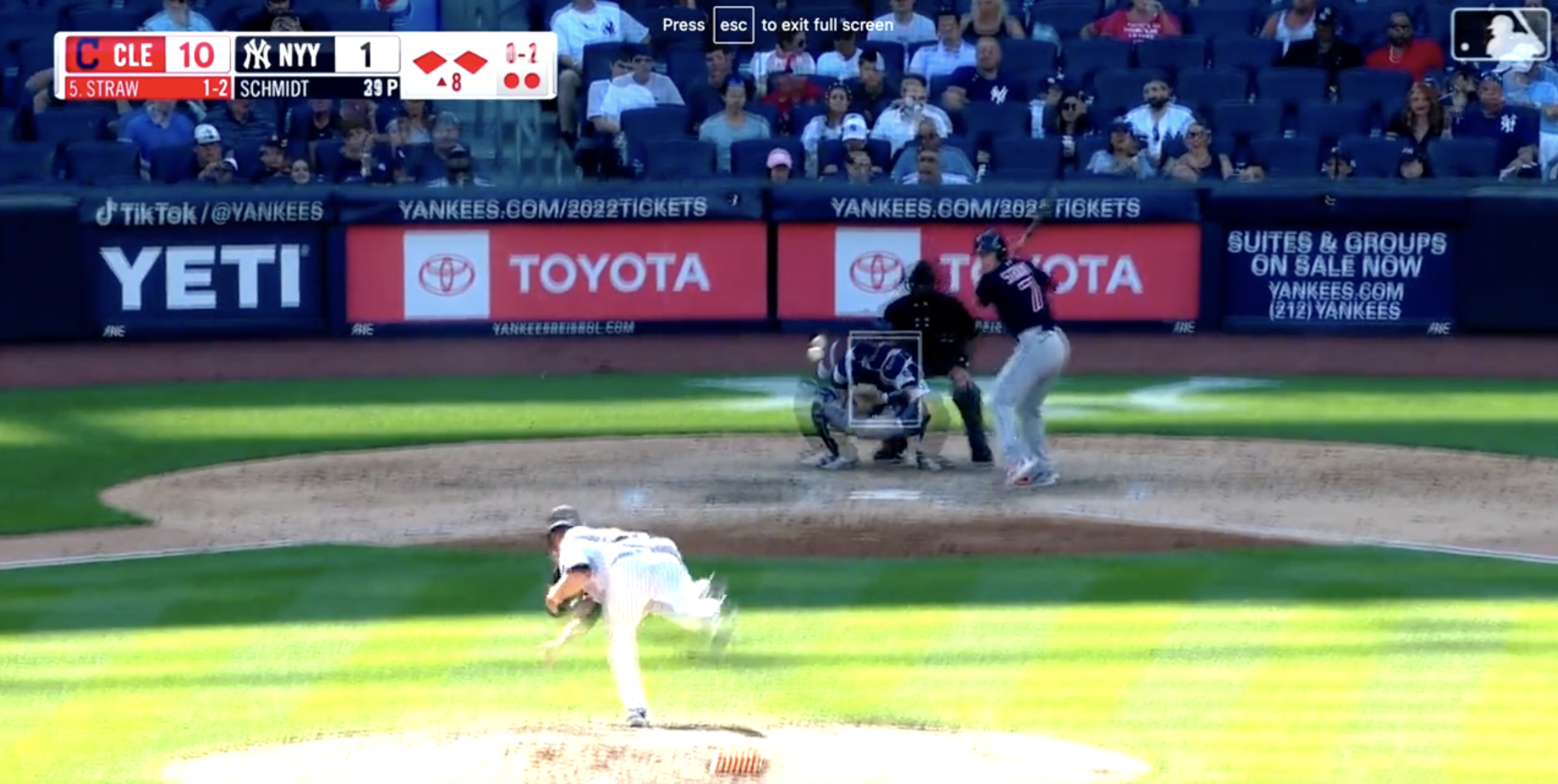 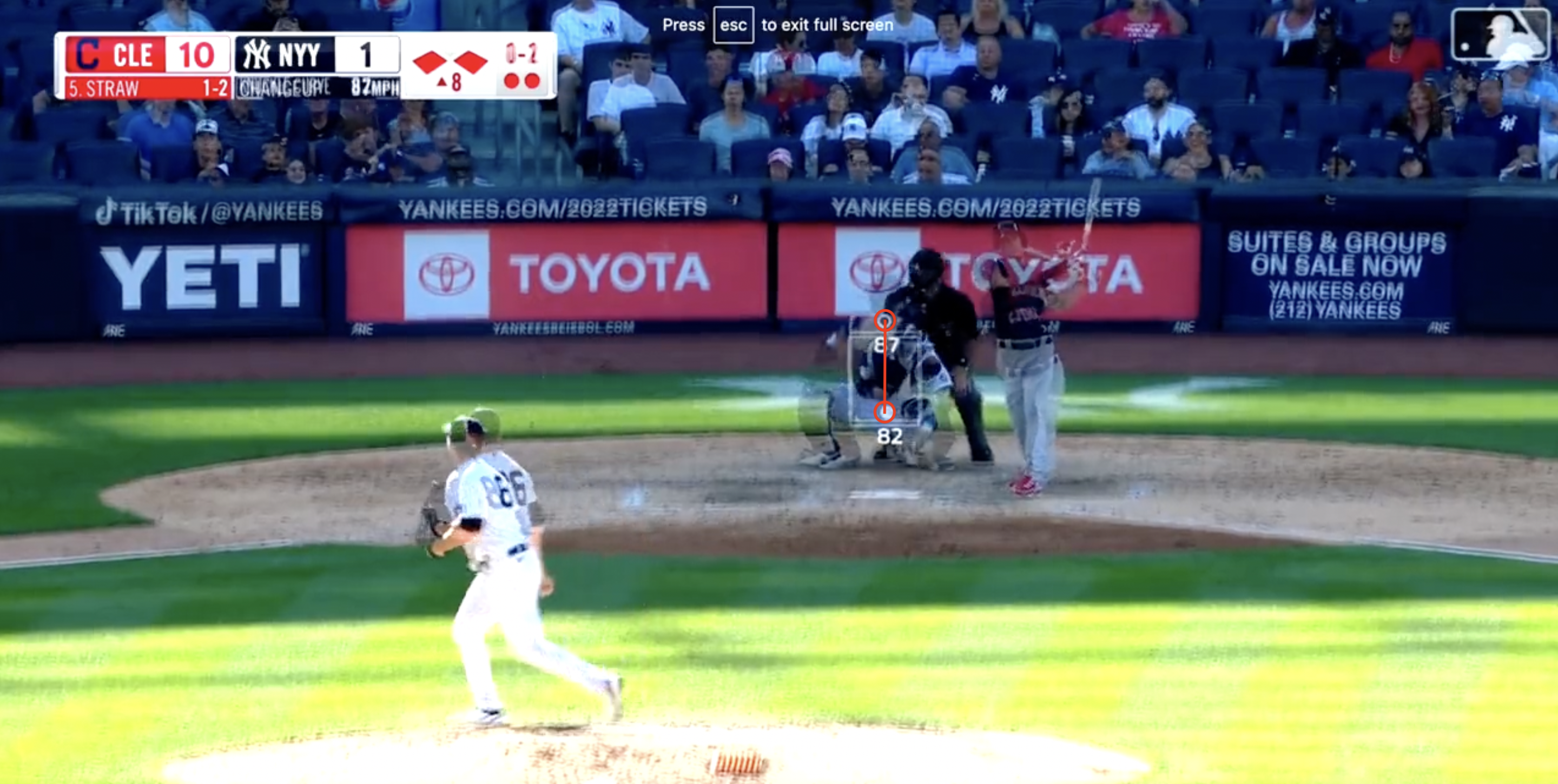 This is perhaps the best demonstration of what I meant about the two pitches staying in a line. The hitter only has to cover one vertical slice of the strike zone. Because of the lack of significant horizontal movement for either pitch, the hitter has a pretty good idea of where the ball is going to land inside versus away as soon as they identify breaking ball out of the hand.

Contrast that with this freeze-frame taken from the second 2022 overlay. 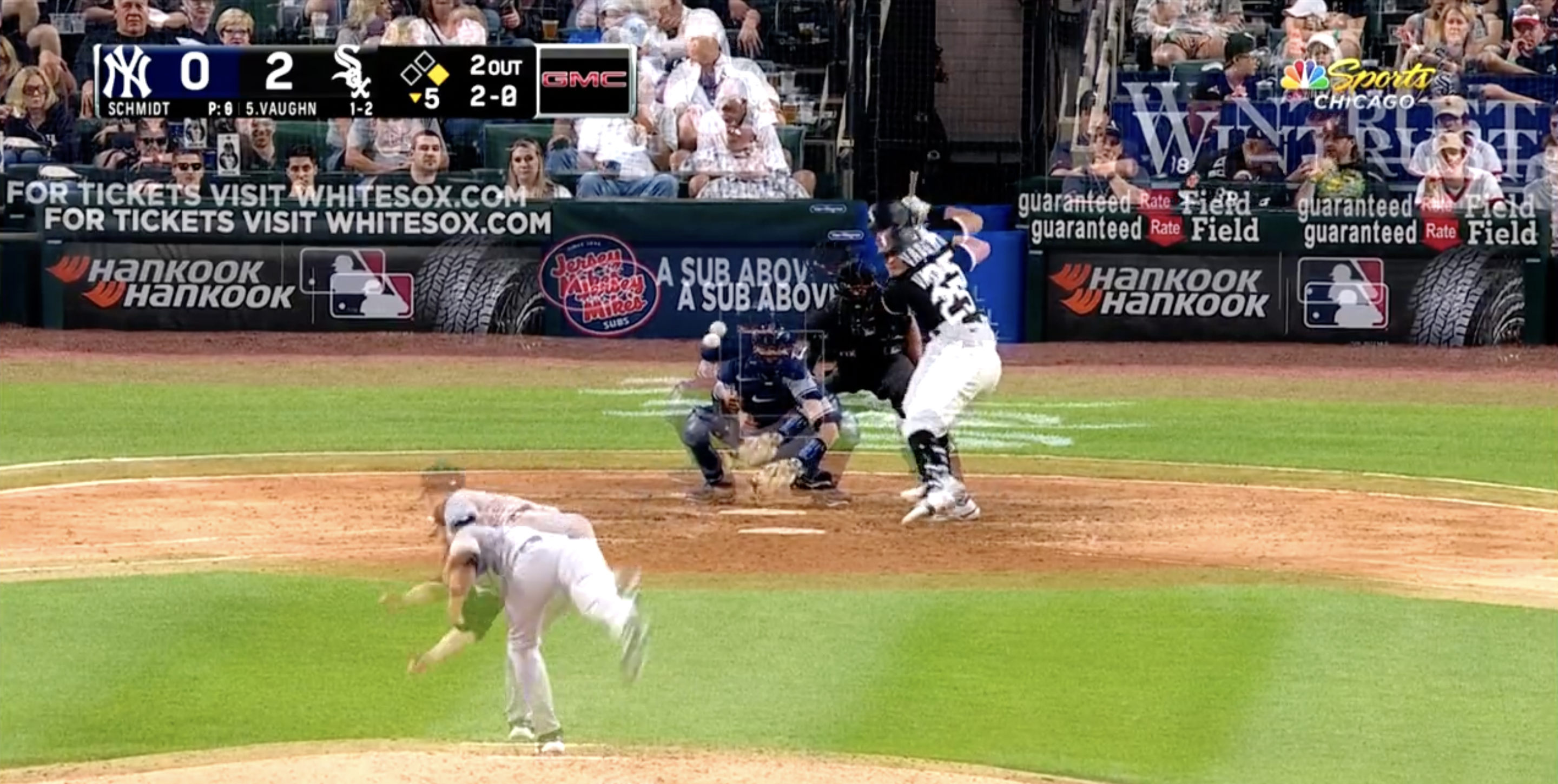 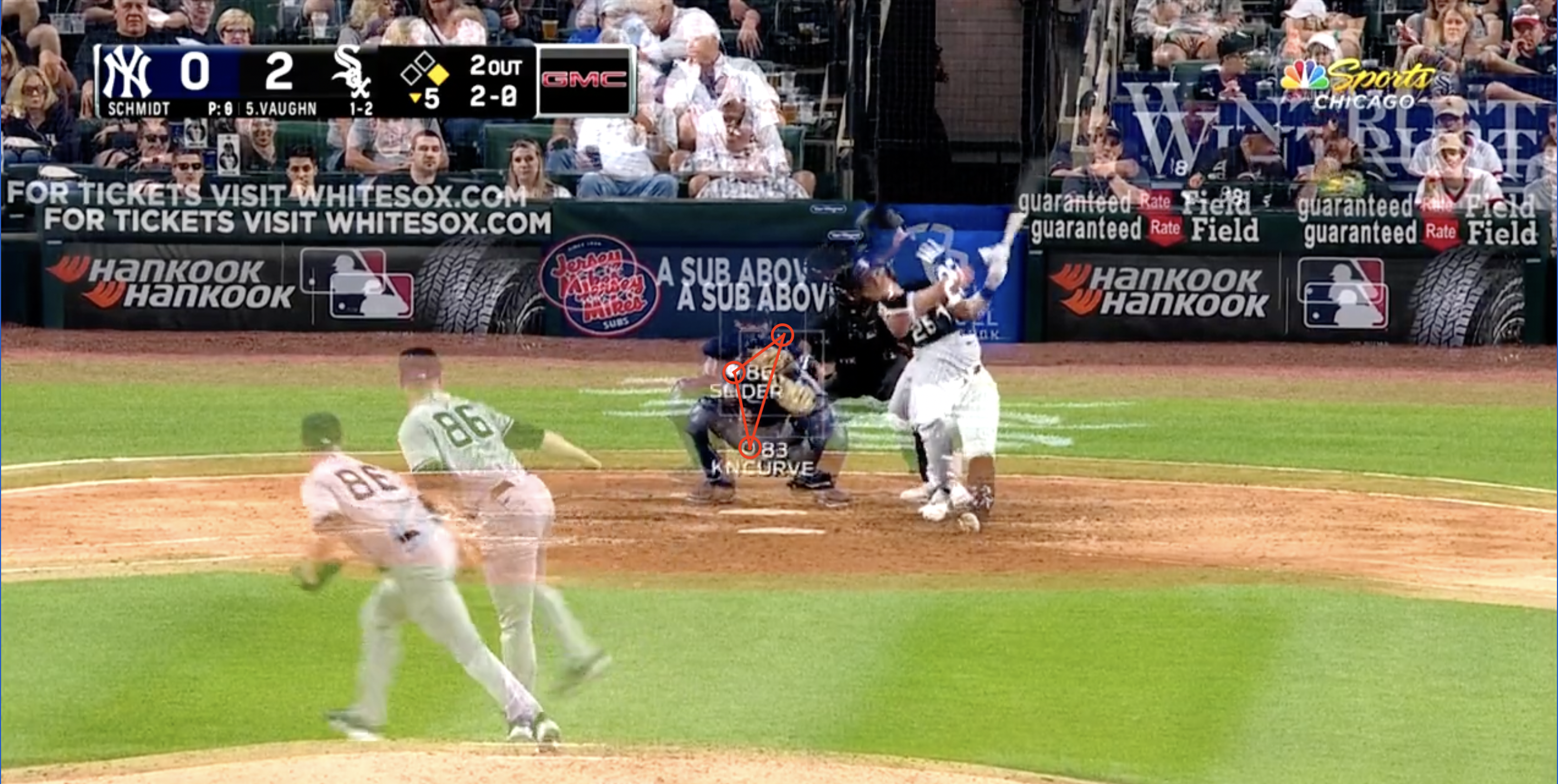 Again, the ball is coming out of Schmidt’s hand on a pretty similar trajectory as in the 2021 overlay. However, the added movement on the slider this year creates two-plane divergence off the aiming point and an x-component divergence off the knuckle curve. As a result, a hitter who is still able to identify breaking ball out of the hand now is tasked with covering a much larger area of the strike zone. For two pitches that start out toward Higashioka’s facemask, there is now a more expansive region where those pitches could cross the plate.

Schmidt is far from a finished product deserving of being plugged into the Yankees rotation. He needs to improve his strike throwing to earn the trust that he can make it multiple times through a batting order. That being said, the weapons are all in place in his arsenal, and are made all the more deadly now that he’s created separation in the movement profiles of his slider and curveball.