Why Matt Carpenter’s hot start is for real

Carpenter is looking like the three-time All-Star version from his days with the Cardinals.

Share All sharing options for: Why Matt Carpenter’s hot start is for real

When the Yankees announced that they were signing Matt Carpenter to a major league deal, my first thought was one of puzzlement. Matt Carpenter as in the former-All-Star-turned-below-replacement-level-36-year-old Matt Carpenter? However, in his first seven games in pinstripes, he’s done nothing but win me and my fellow Yankees fans over.

Back in February, Ken Rosenthal of The Athletic detailed Carpenter’s long road back to a major league roster spot after going unsigned in free agency following a career-worst year in 2021. Carpenter sought help from the likes of Joey Votto, Matt Holliday, and a Baseball Performance Lab to fix the elements that had broken down in his swing. The piece is absolutely worth the read, but the two main tweaks they pursued involved adding loft back into his swing and keeping his barrel in the hitting zone for longer.

The early returns appear to show that he did indeed find a fix. In 21 games with Triple-A Round Rock for Texas, Carpenter batted .275/.379/.613 with 6 home runs, 19 RBI, and a 140 wRC+ — a large part of what caught the Yankees’ eye. That success has more than translated to the majors. He has five hits as a Yankee — four home runs and a bunt single, which in and of itself is amazing — good for a 1.286 OPS and 258 wRC+. His 107.7-mph home run off Shohei Ohtani was his hardest-hit ball in over three years.

I think that Carpenter was the perfect addition to the roster. He never takes an at-bat off and works counts — as evidenced by his 11-pitch battle against Ohtani culminating in a home run. He’s pulling the ball in play 50 percent of the time, which certainly plays in Yankee Stadium, and has one of the lowest groundball-to-flyball ratios (0.50) of his career. Given the mechanical changes to his swing detailed by Rosenthal, I wanted to see if they were the key that has unlocked his early success.

Let’s start off with Carpenter’s first hit as a Yankee — a home run off Jeffrey Springs at Tampa:

He was not so lucky against a similar pitch from James Karinchak in 2021, whiffing on the heater: 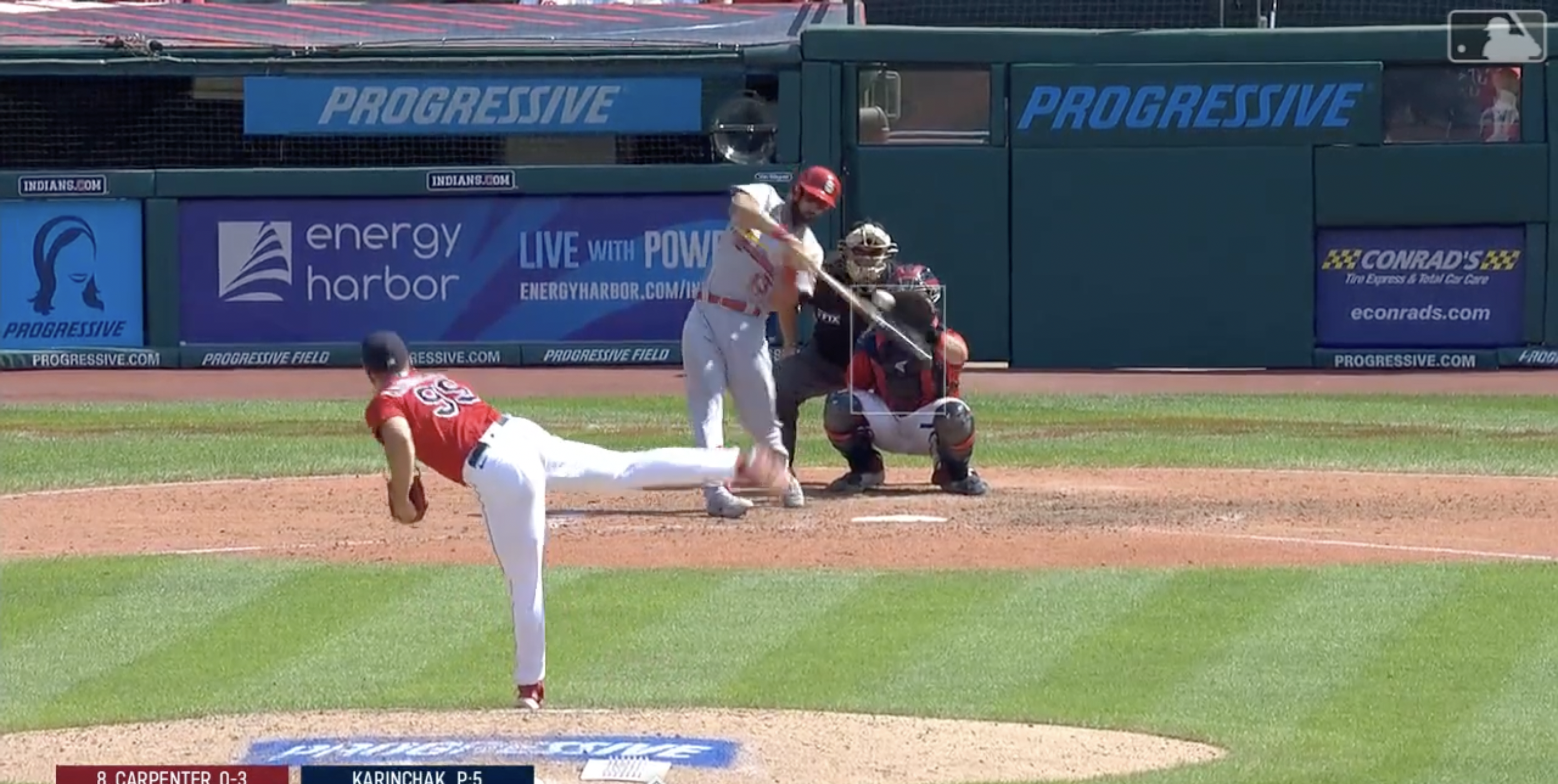 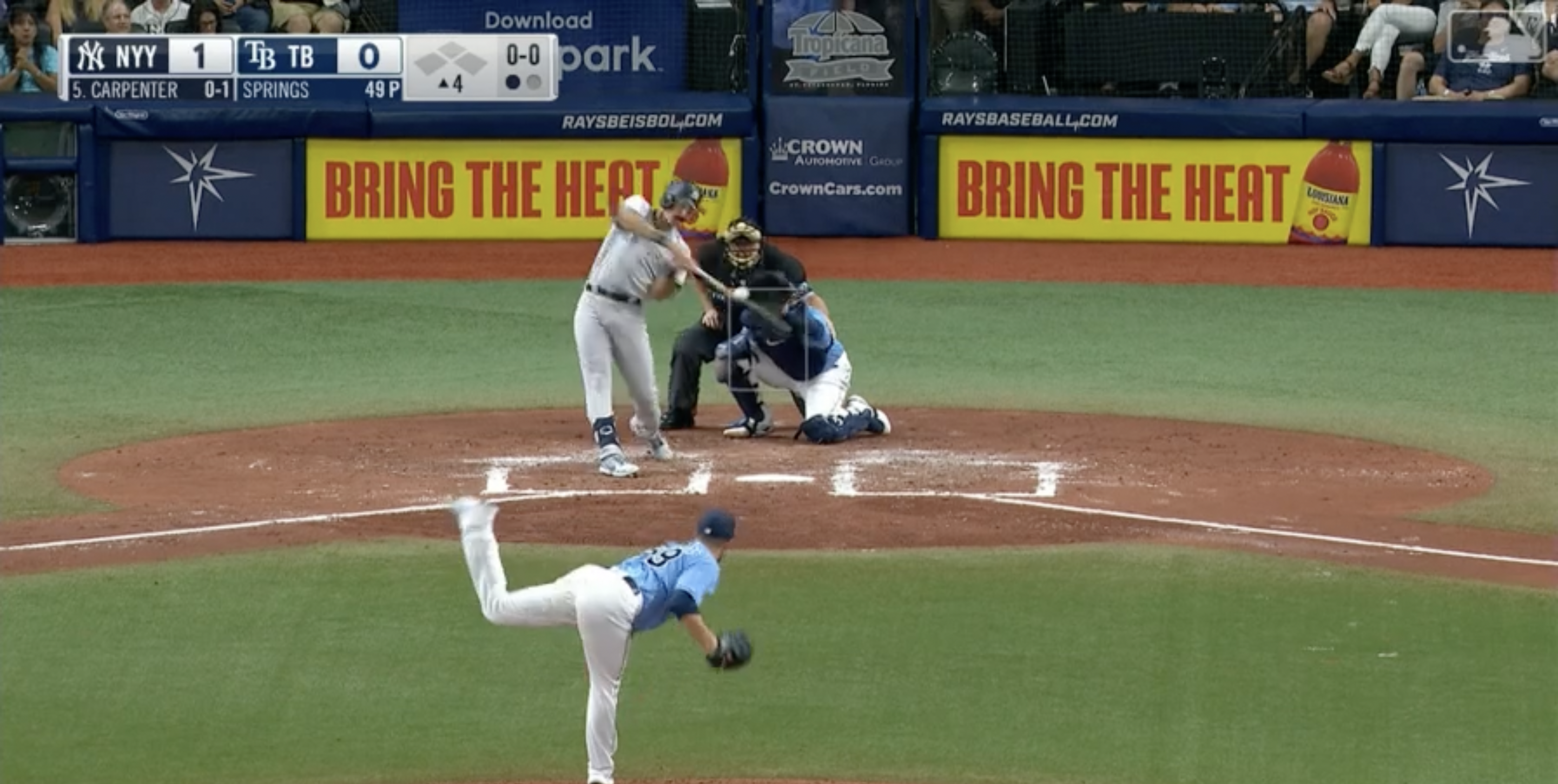 There are two things that jump out to me. The first is the difference in Carpenter’s posture. In 2021, it was almost like his top half was collapsing on itself, and this crumpled posture was seriously inhibiting an effective swing. In contrast, this year it’s almost like he’s able to keep his torso stretched out, creating room to pull his hands in.

That leads to the second point, which is the length of his swing. In 2021, you can see above how long the swing is — the barrel is passing through the outside corner for a pitch that’s up and in. This year, the improved upper-body posture allows him get the barrel to that up and in corner.

Here, we have Carpenter’s home run off Noah Syndergaard:

And here we have a groundout on a similarly-located pitch from JT Brubaker in 2021: 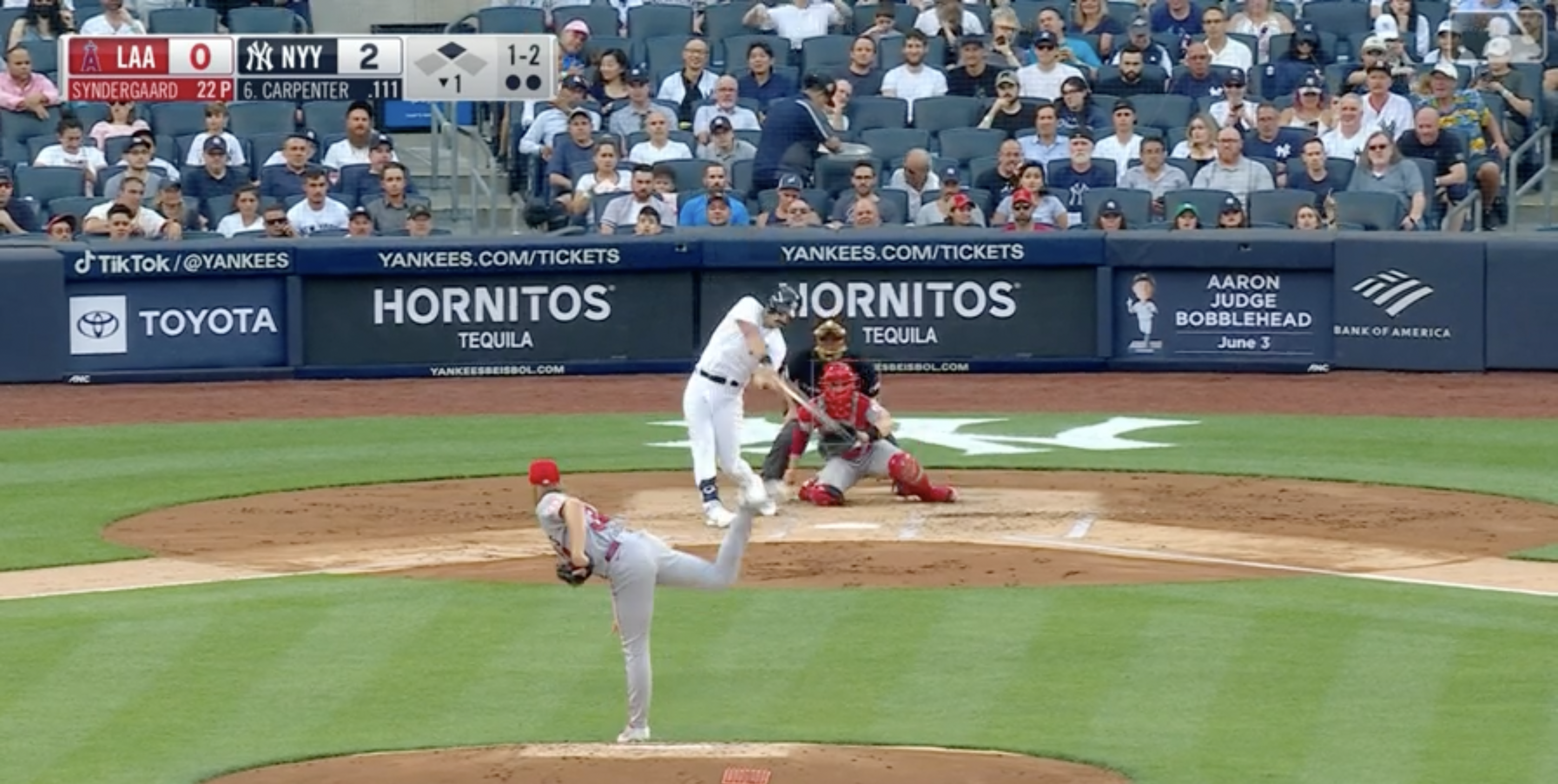 In the article from The Athletic, we learned that one of the biggest issues for Carpenter involved locking his front knee too early. This prevented him from fully engaging his hips, ultimately causing his bat to drag through the zone. You can see in the left-hand clip from 2021, his hips are still pointed between the pitcher and shortstop, basically causing a traffic jam further up the kinetic chain. Thus, Carpenter was effectively getting in his own way, blocking off his arms such that he’s only able to roll over the pitch for a grounder into the shift. This year, he’s doing a much better job of clearing his hips — see how they’re almost pointed down the first baseline — which lets him loft that low-and-inside pitch.

And here is a popup off Craig Stammen on a similar pitch in 2021:

You can see in 2021 the way Carpenter’s momentum is carrying his hips and lower half away from the plate, while this year he’s doing a much better job of staying centered over his base during the swing. In addition, in 2021 you can see how even as he’s just starting his swing, he’s casting his arms away from his body, almost throwing his hands at the ball, whereas in 2022, his hands and arms stay connected with his upper half. This allows him not only to stay inside the baseball and pull the inside pitch, but also to leverage the rotational energy of his core better to drive it with power.

Finally, we have this majestic shot in the fifth inning of last night’s game:

Contrast that with this swing against a similar middle-middle pitch from 2021: 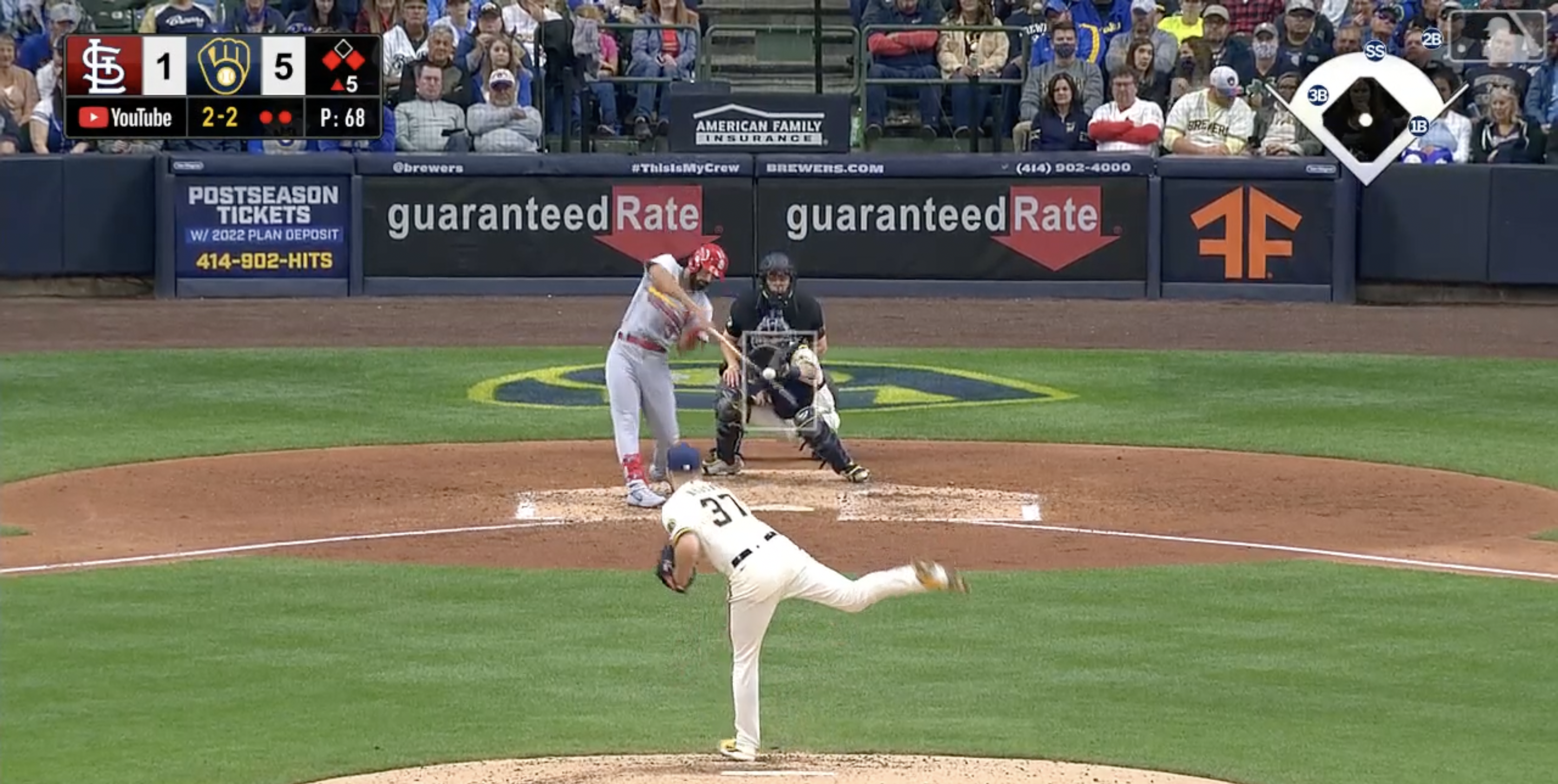 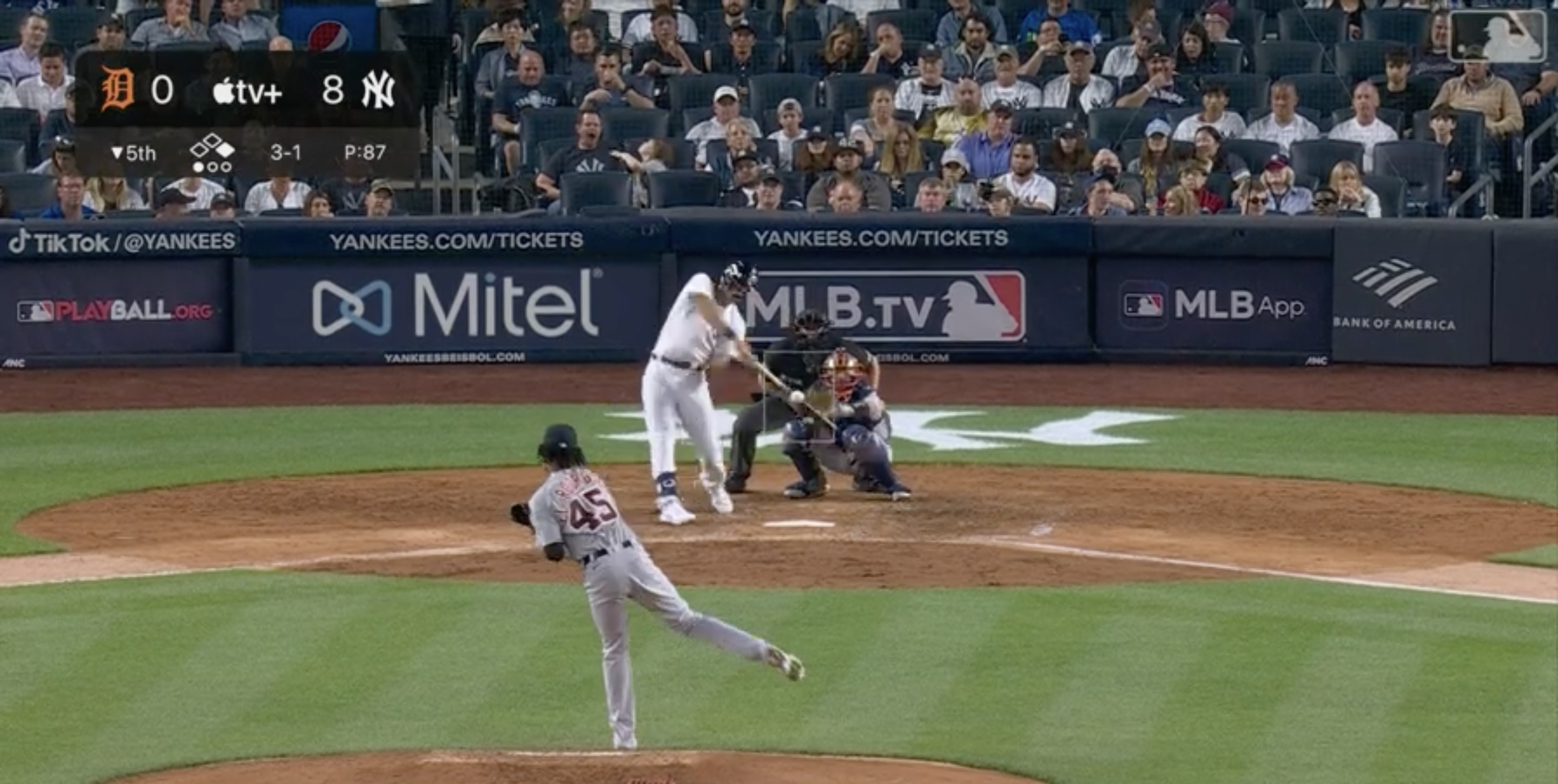 Again, we have an example of how Carpenter’s swing from 2021 is long and loopy, bordering on ponderous. He’s so late to get the barrel to the hitting zone that all he can do is foul this pitch off. And while there is still a bit of loop in his swing in 2022, he is much more direct to the ball. That little bit of compactness he’s added to his swing makes all the difference in allowing him to stay long through the zone with the barrel of the bat.

The thing I love about making discrete mechanical changes is that they can yield concrete and lasting improvements to one’s game. Acknowledging the small sample size caveat, it does appear Carpenter has recovered the aspects of his swing that made him such a dangerous hitter in the last decade. It is for that reason that I implore the Yankees to keep him on the major league roster when Giancarlo Stanton returns from injury.

Of course, this means that Miguel Andújar is losing spot on the bench and returning to Triple-A. I genuinely feel bad for Andújar, as he has clearly put in the work to stick with the major league team and has come up with some clutch hits during this latest stretch. However, I don’t think the Yankees can risk losing Carpenter and are probably better served keeping him up than Andújar (and no, they’re not going to cut Marwin Gonzalez — let alone the more high-profile Joey Gallo or Aaron Hicks — when Miggy has options).

At the very least, Carpenter can offer a potent-left handed bat off the bench in late game scenarios. At best, he is another veteran presence in the clubhouse — something that many of his new teammates have already praised during postgame interviews — who brings game-changing power and the wisdom of 10 years in the majors.