The pitch has elite raw metrics but poor results.

Welcome to another installation in the Yankees Separation pitching series. Today will be almost a hybrid of two different pieces I’ve written already. I’ve talked about how Michael King reshaped his four-seamer to create separation off his sinker and I’ve written about how Clarke Schmidt’s embrace of the whirly slider creates separation off the movement profile off his knuckle curveball. Today, I will be looking at Schmidt’s four-seamer and see if he would stand to gain from adjustments* similar to the ones made by King.

*Schmidt might have to make those adjustments in Triple-A, as he was optioned this morning to likely make room for the return of Albert Abreu after the Yankees used Schmidt in back-to-back ballgames the past couple nights.

The more I looked at the data, the more it began to dawn on me — Schmidt might just throw the most inefficient and underperforming four-seam fastball in MLB. His fastball features the 16th-highest spin rate of any four-seamer in baseball. With almost 50 RPMs more than Gerrit Cole, one might expect Schmidt’s fastball to be a similar late-riding weapon at the top of the zone. That’s not the case, as his four-seamer is in just the fifth percentile leaguewide in terms of rise versus average.

I plotted the rise on Schmidt’s four-seamer as a function of spin rate divided by velocity in an attempt to control for the way spin rate scales with velocity. As you can see, his fastball exhibits far less rise than you might expect for a four-seamer with similar spin rate and velocity. I’ve also included Cole in the graph as a reference point for just how little rise Schmidt’s been getting on his four-seamer given the similarities in some of the numbers behind his and Cole’s respective pitches.

So why in the world is Schmidt’s four-seamer so flat? Why isn’t it rising the way its spin rate would suggest? One of the first places I look when velocity and spin rate alone are not enough to explain movement is Statcast’s Active Spin metric. Active spin, or spin efficiency, measures the amount of spin that contributes to a pitch’s movement. Lo and behold, we seem to have our answer:

Schmidt’s four-seamer is in the fourth percentile leaguewide in terms of spin efficiency, with a little less than 69 percent of the pitch’s spin contributing to vertical movement. He’s getting all that spin on the pitch, and yet over 30 percent of it is being wasted.

Even though Schmidt finds himself in the bowels of four-seam spin efficiency, we can actually take some encouragement from this graph. The fact his data point lies so close to the trendline means there is nothing wonky going on — the pitch is behaving exactly as we’d expect given its measurables. The convenient part about expected outcomes matching up with observed outcomes means we can prescribe a fix with a certain baseline of reliability.

How can Schmidt get his four-seamer to spin more efficiently? That’s all down to mechanics. Variables such as arm slot, wrist positioning, finger pressure, and hand orientation at release all combine to affect the way the baseball is spinning. I will again use Cole as a reference, this time comparing the pairs’ release points. 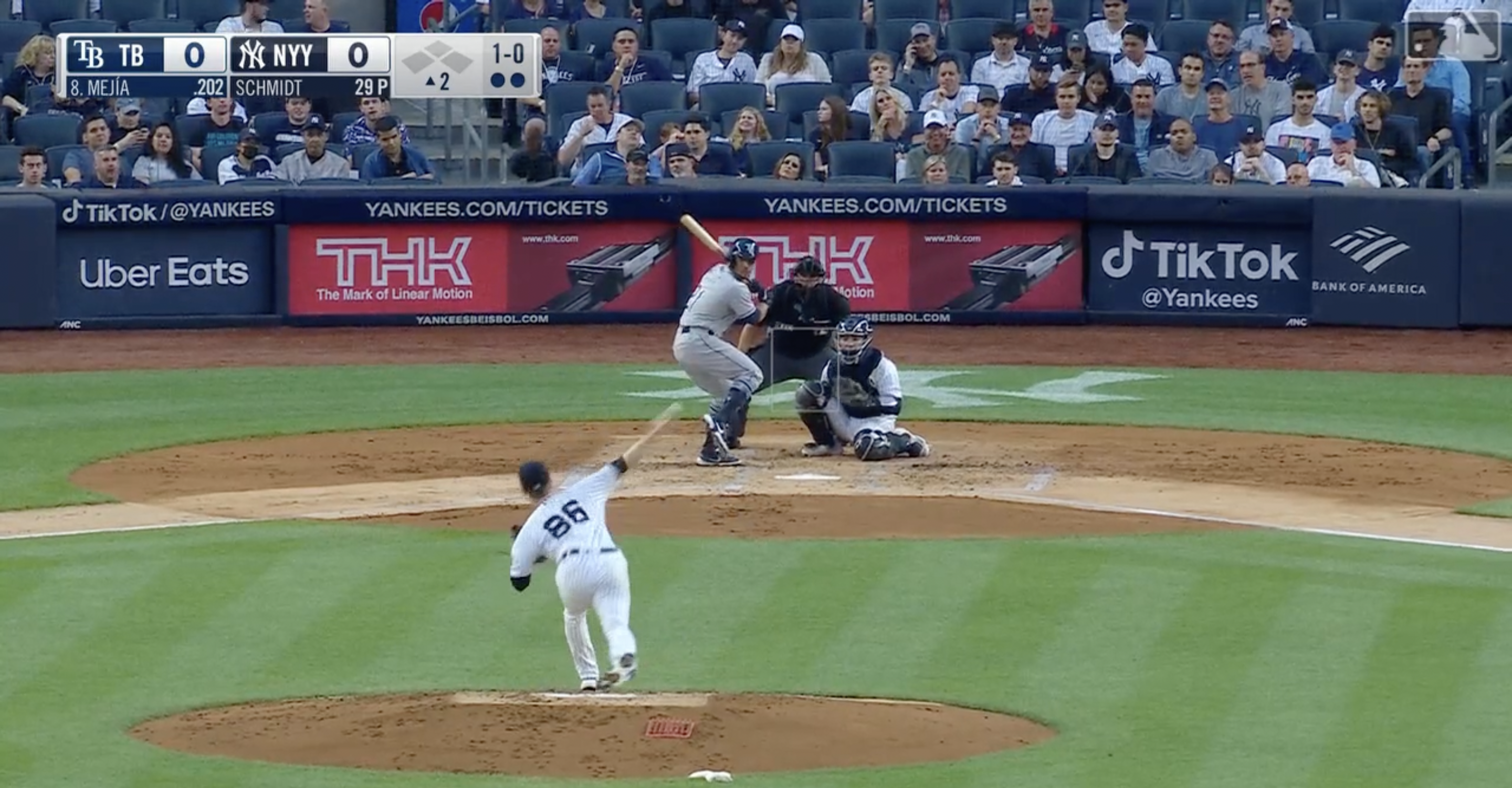 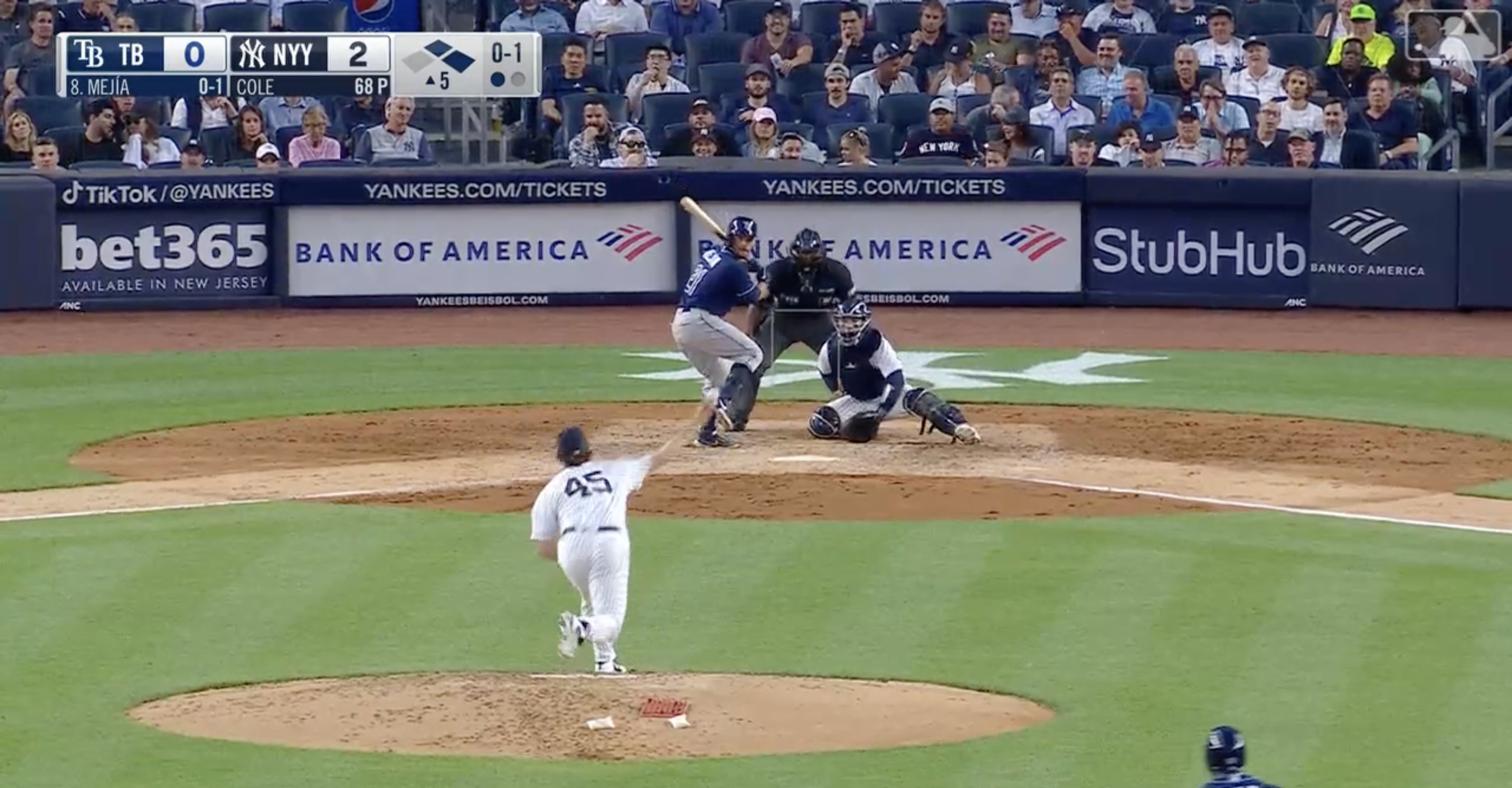 Though they both throw from a similar arm slot, you can still see the differences that allow Cole’s fastball to spin more efficiently. Schmidt tends to pull off a little towards first base whereas all of Cole’s momentum is traveling through the baseball and toward home plate. A close look shows that Schmidt’s fingers sort of pull across the baseball diagonally whereas Cole does a better job of staying behind the four-seamer, with index and middle fingers slightly more vertical to give the ball slightly truer backspin.

Is it fair to repeatedly compare Schmidt to Cole? Mmm ... maybe not. But is it still instructive to hold Cole up at the extreme end of the spectrum of fastball performance as a model toward which Schmidt can work? Absolutely.

As a final thought, I decided to take a peek at the spin axis of Schmidt’s four-seamer. Wouldn’t you know it, there appears to be a correlation between spin axis and vertical movement. The closer the axis approaches 180 degrees (a pure backspun four-seamer), the more it rises. Schmidt’s two most recent outings are the closest to that 180 degree mark, and would you look at that: in those appearances his four-seamer exhibited three inches more rise than his previous season average.

Clarke Schmidt is one of my favorite pitchers in the entire organization. Sure, the elite raw metrics like spin rate are sexy, but more importantly he has shown a willingness to learn that surpasses most if not all of his teammates. He’s been one of the staunchest adherents to the gas station, whirly slider, etc. It’s one thing to have the desire to improve as a player. But what Schmidt has shown is both that desire and the ability to integrate the physiological and mechanical changes recommended by his coaches. He learned a new slider in 2021, worked over the offseason to improve its shape, and now it’s a completely revamped pitch. Not all players have the same capacity to translate what they’ve been taught into results on the field.

In some ways he must be the modern pitching coach’s dream. Schmidt is like being handed a brand new Ferrari right off the production line. Sure, the car may have some of the best specs (horsepower, torque, etc.) of any vehicle on the road, but ultimately the performance of the car comes down to the driver behind the wheel. Given the way Matt Blake has steered the rest of the pitchers on the staff in the right direction, I have no doubt he can do the same with Schmidt’s four-seamer.