They could use another lockdown option for high-leverage situations.

Share All sharing options for: How the slider could push Wandy Peralta into Aaron Boone’s inner circle of trust

Widely expected to be an overwhelming strength of the team — an assumption borne out through the first two-and-a-half months of play — the Yankees bullpen has hit a bit of a rough patch of late. Exacerbated by the injury absences of Aroldis Chapman, Jonathan Loáisiga, and Chad Green, the unit is not as deep as it could be.

In fairness, they’ve still gotten the job done the vast majority of times they’ve been called upon even with the aforementioned trio on the sidelines. But one consequence of the injuries has been a rapid contraction of Aaron Boone’s circle of trust. These are the guys that Boone relies upon in the highest leverage situations, and right now it looks like that group consists of just two players — Clay Holmes and Michael King. Granted, that’s two of the best relief pitchers in baseball, and the ability of Yankees’ starters to go deep into games means many times it has only required the pair to close out contests. Still, it couldn’t hurt to broaden the circle to three members.

Wandy Peralta looks like the most likely candidate. He’s already proven to be Boone’s third go-to guy after Holmes and King. But rather than hovering around the rim of the circle of trust in the Yankees bullpen, a slight modification to his arsenal could push him over the edge and into the center of the inner sanctum of reliability.

Peralta throws his sinker and changeup a combined 85.8 percent of the time. And given the success he’s had — 2.42 ERA (158 ERA+), 3.24 FIP, 57.3 percent groundball rate, 97th percentile exit velocity, and 94th percentile xwOBA in 23 appearances — it’s easy to see why he trusts that pair of pitches so much. However, the similarity between the pitches’ movement profiles can sometimes get him into trouble.

Here’s a sinker from the series opener against the Rays.

The ball starts on the insider corner and then darts armside at the last second to induce the swing and miss.

And here’s a changeup from the Yankees extra-innings walk-off over the Cubs.

Not only does the velocity differential have Gomes out in front, you can see how the late fading armside movement and sink take the baseball away from and below the barrel of the bat. Even thought the pitch is center-cut, that little bit of movement leads to the whiff.

Here’s an overlay that shows how well the pitches can work in tandem.

The two pitches tunnel for a long time on their paths to the plate, only diverging in the last 15 feet or so. The fact that he throws each pitch at least 38 percent of the time means the batter has to be ready for both in any count. A hitter who is expecting sinker will swing early and over the top of the changeup whereas a hitter who is expecting changeup will swing late and underneath the sinker.

The problem is that both pitches still end up in the same quadrant of the zone. Although the two pitches are separated by velocity and movement, there is still time to adjust to either pitch as it approaches the plate. A hitter can therefore zero in on a location the instant they identify an aiming point out of the hand.

My proposal is that Peralta increase the usage of his slider. He’s throwing it about nine percent of the time this year, and I’d love to see that rate tick up into the double-digits.

Interestingly, the slider was Peralta’s most used pitch with the Giants in 2019 and 2020. It was also arguably his most effective offering, inducing a whiff rate in excess of 41 percent in both season. Then, when he was traded to the Yankees, his new pitching coaches had him slash its usage by two-thirds.

I can understand the rationale behind this decision. Peralta’s slider was well below average in terms of both vertical and horizontal movement. Additionally, rather than the whirly slider learned by many of his teammates, Peralta still throws the old school bullet spin style slider that achieves its effectiveness through late, sharp break as opposed to wide sweeping movement. That being said, I feel they may have overcorrected in this instance, moving too far away from one of his strengths.

Take this slider vs. Gary Sánchez:

It looks like it’s headed for the down-and-away corner that Peralta so frequently pounds with his sinker and changeup. But instead of fade, it takes a hard nosedive into the dirt, leaving Gary no chance to check his swing.

This overlay of the three pitches is the best illustration of how the slider amplifies Peralta’s other two pitches.

All three pitches are thrown out of the same chute, and yet one ends up off the plate away, one ends up perfectly on the corner down and away, and one ends up below the zone down and in. The slider creates separation off the movement profiles of his sinker and changeup such that hitters now have to respect both sides of the plate rather than key in on the armside edge. 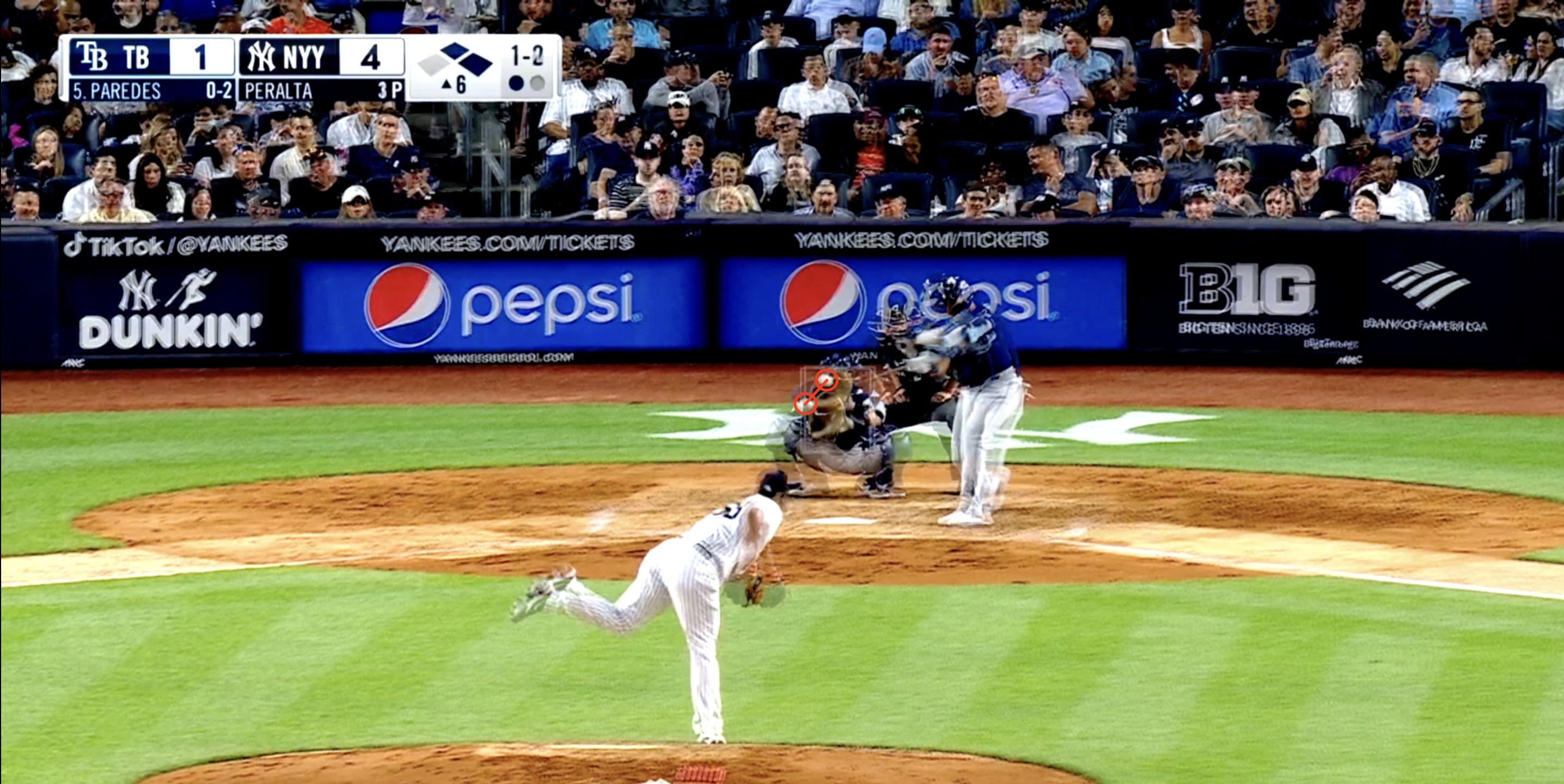 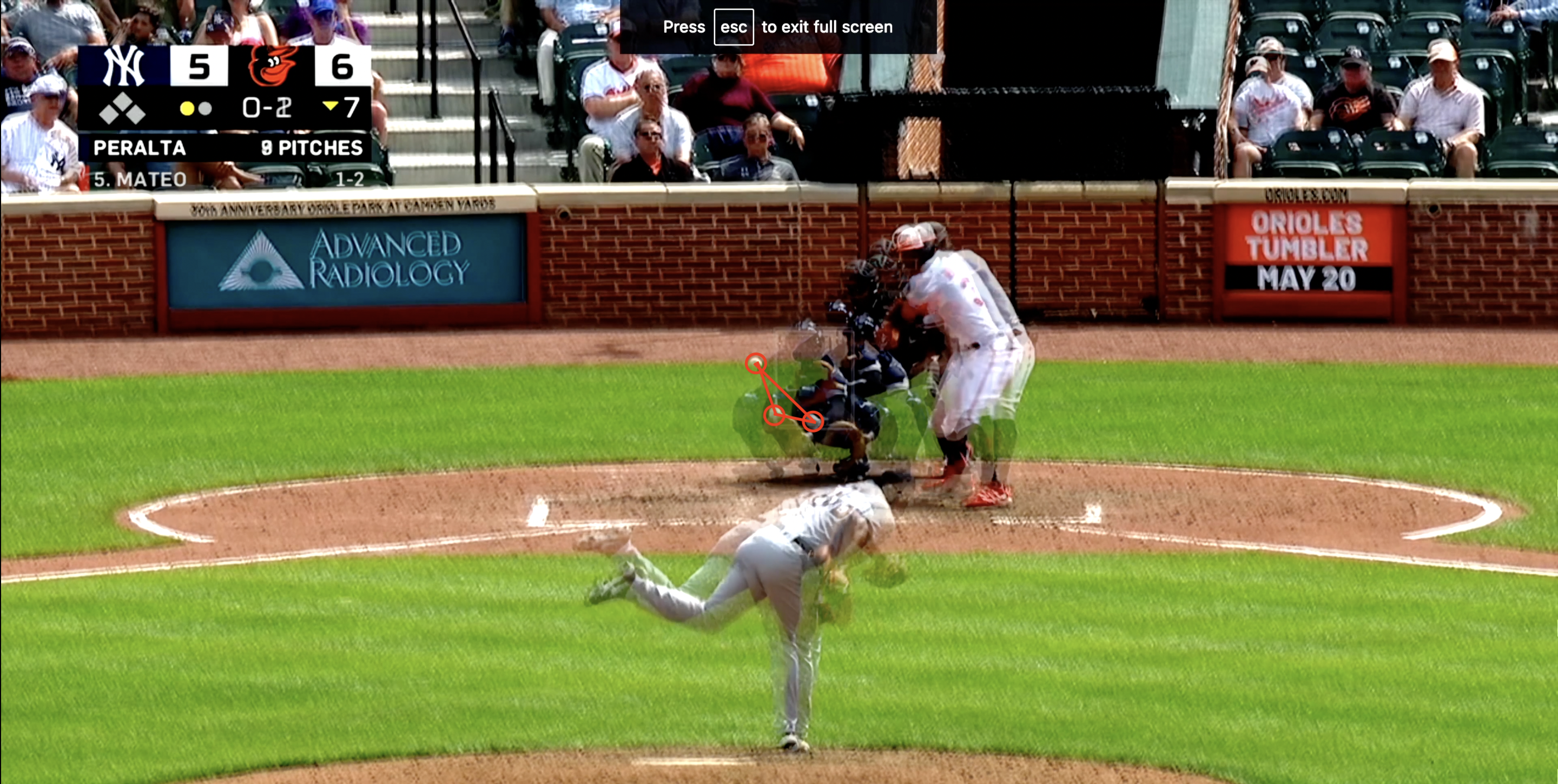 You can see how much wider an area the hitter has to cover when Peralta uses the slider. For two sets of pitches with similar trajectories out of the hand, there is a vast discrepancy in the portion of the hitting zone the pitch could end up in when Peralta is mixing sinker, changeup, and slider vs. just sinker and changeup.

Of course, this comes at a time when the Yankees relief arms are experiencing fewer meltdowns than when Chapman, Loáisiga, and Green were all active. However, as Sunday’s 10-9 loss to the Blue Jays showed, bullpen reliability falls off once you move outside the circle of trust. Wandy Peralta is on the cusp of joining the group and the slider’s divergent movement off his sinker and changeup could be the key.