The added life on the four-seamer allows it and his sinker to both play up.

Welcome to the second installment in our Separation pitching series! Last week, I introduced the series with a breakdown of Luis Severino’s slider, looking at how changes in the pitch’s shape have allowed it to pair effectively off of his newly-learned cutter. Today we will be moving from the starting rotation into the bullpen as we take a look at Michael King.

King has been one of the breakout bullpen stars of the season, leading the league’s relievers with 1.2 fWAR and 38 strikeouts while allowing just one earned run across his first eight appearances and 17.2 innings pitched. Much of the narrative surrounding King’s success has revolved around how he learned the patented Corey Kluber breaking ball from his former teammate. Whether this mysterious Kluberball is yet another version of the seam-sifted-wake whirly slider that’s sweeping the Yankees pitching staff or a low armslot curveball with a high component of transverse spin remains to be seen. Semantics aside, the pitch has clearly been a weapon that has empowered his success.

However, that’s not what I’m here to talk about today. No, what I’m interested in is King’s four-seamer. Or, to be more precise, how his four-seamer and sinker work in tandem. It is obvious through the first two months of the season that King has modified the shape of his four-seamer to create separation off his sinker’s movement profile.

I first had my attention called to King’s fastball at the start of the 2021 season. Lindsey Adler of The Athletic wrote a fabulous piece giving us a sneak peek into the the Yankees Gas Station, a cutting edge pitching laboratory at their player development complex in Tampa. One of the most exciting developments to come out of those facilities was an uptick in velocity across multiple arms on staff

I remember expressing audible surprise when I saw 95-96 mph jump off the screen during King’s first outings of 2021, especially for a pitcher who operated in the low-90s in previous seasons. He was one of the most prominent patrons of the Gas Station, so to see such immediate and significant results was beyond encouraging. It’s no surprise that he would turn in the best performance of his career that year — a 3.55 ERA across 63.1 innings.

Yet simply adding velocity to one’s fastball does not a star pitcher make. You need command, you need spin, and most importantly, you need movement. This is a concept with which I am sure many Yankees fans are familiar. Nestor Cortes only throws his four-seamer in the low-90s, but it’s still one of the best four-seamers in the league because of its late-riding life that gives it the perception of rise (the baseball is not in fact rising, but just dropping less than the hitter expects). This “rise” counteracts the swing plane of the modern day hitter and generates whiffs at the top of the zone.

In this regard, King’s four-seamer in 2021 was merely a bit above average. It also featured a healthy amount of armside run:

And that last part was the problem. King’s four-seamer too closely resembled his sinker from a movement standpoint. For all intents and purposes, they functioned together as a single pitch.

Fast-forward to 2022 and his four-seamer is a completely different pitch. David Cone has mentioned on YES Network game broadcasts that he’s altered the pitch enough that it and the sinker now function as two distinct pitches, and that’s exactly what we’ve seen so far:

King has added a little over an inch of rise on his four-seamer this year. But more importantly, he’s straightened it out significantly, subtracting over three inches of horizontal run.

Here’s a better demonstration of what I mean when I called his 2021 four-seamer and sinker the same pitch:

The two pitches are virtually indistinguishable. They travel roughly the same path to the plate and end up in almost identical locations.

Contrast that with the four-seamer and sinker he is throwing in 2022:

The difference is night and day. The four-seamer travels straight as an arrow, holding its vertical plane as it reaches the plate. The sinker on the other hand takes a sharp right turn toward the hitter while at the same time ducking below the plane of the four-seamer. This two-plane separation in movement profiles is what makes the pairing of the two pitches so effective.

The best hitters in the game might be able to pick up the baseball’s spin out of the pitcher’s hand, allowing them a split-second of foresight as to whether it’s a heater or a breaking ball. But it is effectively impossible to distinguish between four-seamer and sinker based on spin, and that’s the key for King.

In this freeze-frame from the 2021 overlay, you can see how a hitter who identifies fastball would have a fair shot at making contact on both the sinker and the four-seamer. He can zero in on a specific location upon reading fastball out of the hand, knowing that both pitches used to break in similar fashions.

Now, a hitter who identifies fastball out of the hand has to cover the entire width of the plate for a four-seamer and sinker thrown from identical release points and with nearly identical aiming points. A pitch that looks like it will run over the heart of the plate instead lands up and away. Conversely, a pitch that looks middle-middle out of the hand could stay straight, but could also zip armside out of the zone.

Ben Clemens of FanGraphs has written about pitchers who throw both a four-seamer and a sinker, recommending higher four-seam usage against flyball hitters vs. a steadier diet of sinkers to groundball hitters. However, I think King is redefining this type of two-fastball pitcher by using his sinker as a called-strike machine and then going to the four-seamer as a legitimate high-whiff strikeout pitch.

Of course, all of this comes with the obvious caveat that King has struggled of late. He’s gotten crushed to the tune of nine earned runs on 15 hits across his last seven outings and 11.1 innings pitched. I don’t think this is down to a sudden loss in movement separation between his fastballs, but rather poor command of the pitches. 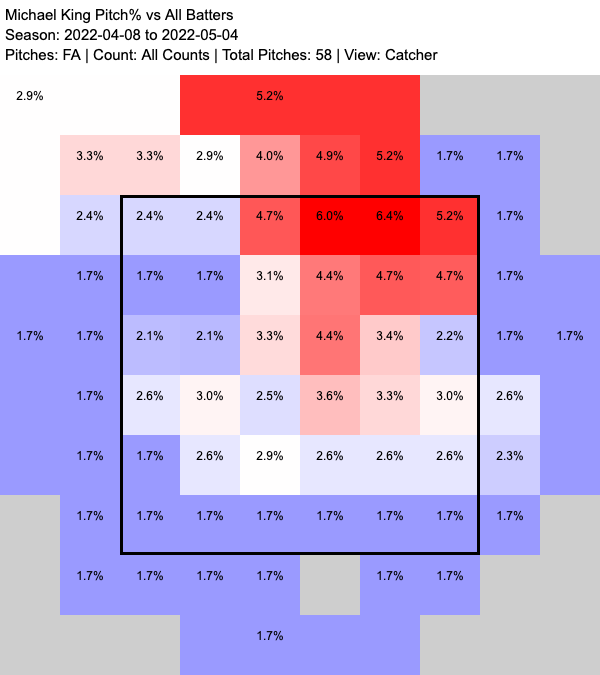 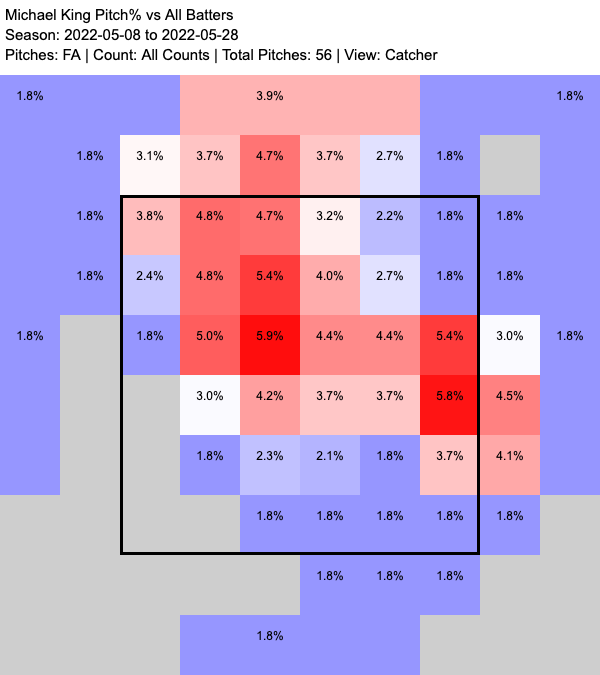 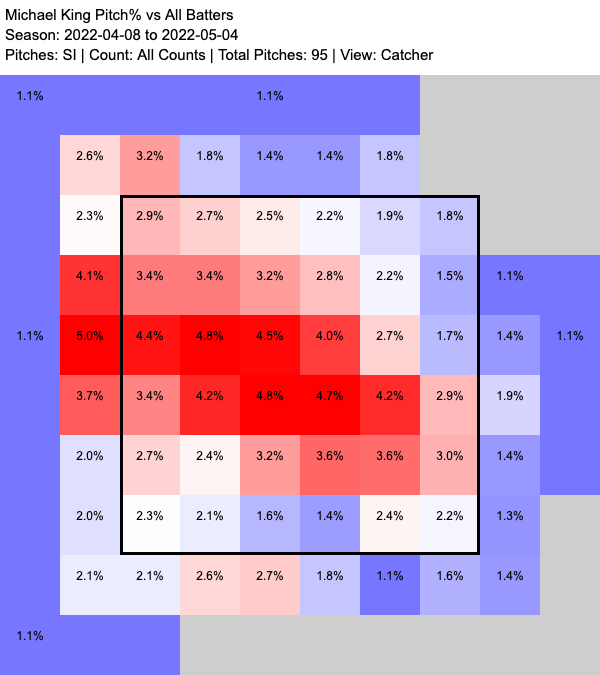 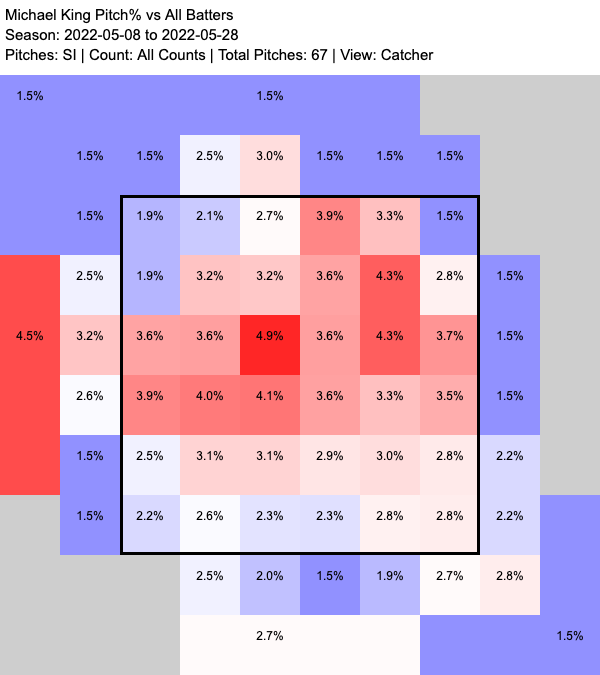 Indeed, it appears he’s missing his spots more frequently with the sinker and four-seamer during this rough stretch, and those misses are ending up middle-middle and getting crushed. Andrés analyzed this trend in more detail earlier today, finding that inconsistencies in his release points with either pitch may be to blame.

Is it reasonable to expect Michael King to continue to be the literal best reliever in baseball all season? Maybe not. That being said, there is no reason not to believe in this new-and-improved version. He has made real, tangible changes to his mechanics and approach to pitching, and that is the sort of foundation-building that enables improvements in effectiveness to stick year-to-year. I am confident King will return to form, and a large driver of that rediscovered success will trace back to the separation in movement profile between his four-seamer and sinker.