The two pitches form a lethal pairing capable of striking out any hitter.

Welcome to the first installment in the Separation pitching series! Over the next couple of weeks, we’ll be taking a look at the Yankees pitchers who have created the most separation in the movement profiles of their pitches. If you are unfamiliar with the concept of separation, or just want a sneak peek at what to expect from this series, I recommend taking a quick look at the Separation series primer that went up on the site yesterday.

I can think of no better pitcher to launch this investigation than Luis Severino. He’s put together an encouraging start to his return to the rotation, going 3-0 in his first eight starts with a 3.02 ERA, 3.69 FIP, and a 43:15 strikeout-to-walk ratio across 41.2 innings pitched. And the coolest part is the way he’s doing it.

Yes, there are still flashes of the Severino of old pumping triple digit heaters and knee-buckling sliders. However, it is clear that we are seeing a wiser, matured, and more refined version of the starter that burst onto the scene in 2017 and 2018. He has worked hard to master his changeup, now trusting the pitch in any count to both lefties and righties. I wrote back in April how Severino was one of several Yankees pitchers to incorporate the cutter into their repertoires.

And now it looks like he is redesigning the existing pitches in his arsenal to create separation off the newly-learned cutter. The bulk of that remodeling focused on the slider. I first had my attention called to this development during spring training.

I've been seeing three different breaking ball shapes from Luis Severino this spring. Looks like a curve (83 mph), a slider (89 mph), and a cutter (93 mph). pic.twitter.com/rPPnkOzRZB

Initially I was puzzled as to why Severino would feel the need to reshape what was already one of the best pitches in the game. At the peak of his powers in 2017 and 2018, Severino’s slider was considered one of the best in the game because of the tremendous amount of depth he achieved with the pitch. The pitch sat in the top-20 in the league in terms of downward tilt.

But then I remembered how flat his slider looked during his cameo appearances in the injury-shortened seasons of 2019 and 2021. Indeed, even in his first few starts of 2022, the slider wasn’t achieving nearly the same vertical drop as the sliders we were used to seeing from him.

Take this slider to Jeimer Candelario in the second inning of the Yankees’ April 20th game against the Tigers.

He starts the pitch belly-high and it never drops below the zone, allowing Candelario to barrel it for a double.

Contrast that with this slider to Robinson Chirinos in the third inning of the Yankees’ May 16th game against the Orioles.

I realize this pitch was a ball but just look at the amount of depth he achieves! This slider started middle-middle and ended up bouncing at the back of home plate.

David Cone shed a light on the thought processes that might’ve gone on to initiate this sort of tinkering with Severino’s arsenal. During YES Network broadcasts of a handful of Severino’s starts, Cone has talked about how important the cutter has been and will continue to be for Severino. With the cutter, however, Cone also noted how Severino’s slider has taken on more of a curveball shape, exhibiting greater downward tilt but also with an added horizontal component. Cone explained that this adaptation was necessary to create separation in the movement profile off the newly-learned cutter, such that it and the slider remain two distinct pitches rather than blending into a single generalized breaking ball.

Severino himself backed up the observations that Cone had made. Following one of his recent starts, he has been experimenting with using the slider more like a curveball, taking some velocity off in exchange for greater movement. Statcast still characterizes this slower breaking ball as a slider, so we will continue to refer to it as such as we continue our investigation.

I think we are beginning to see just how good this new pitch can be. Severino dismantles Luis Robert in the first inning of the Yankees’ May 22nd game against the White Sox with an unfair sequence of sliders.

The slider is right back near the top of the vertical movement leaderboard. That alone is enough to make the pitch elite, but as Cone alluded to, it’s the way the pitch synergizes with his new cutter that makes the pairing a truly deadly combination.

Here is an example of a cutter-slider sequence from early in the year, before the redesign was complete:

Both pitches break on roughly the same plane, each ending up fairly close to the plate.

Fast forward a few weeks to this overlay of another cutter-slider sequence, only this time with the new-and-improved slider:

The difference is night and day! Severino has practically doubled the amount of separation between the cutter and slider now that the latter pitch has two-plane movement in addition to greater depth.

I’ve taken freeze frames of each clip to really highlight the progress he’s made. On the left of each image slider is the decision point for the hitter, and on the right is the roughly the point when the ball crosses the plate. 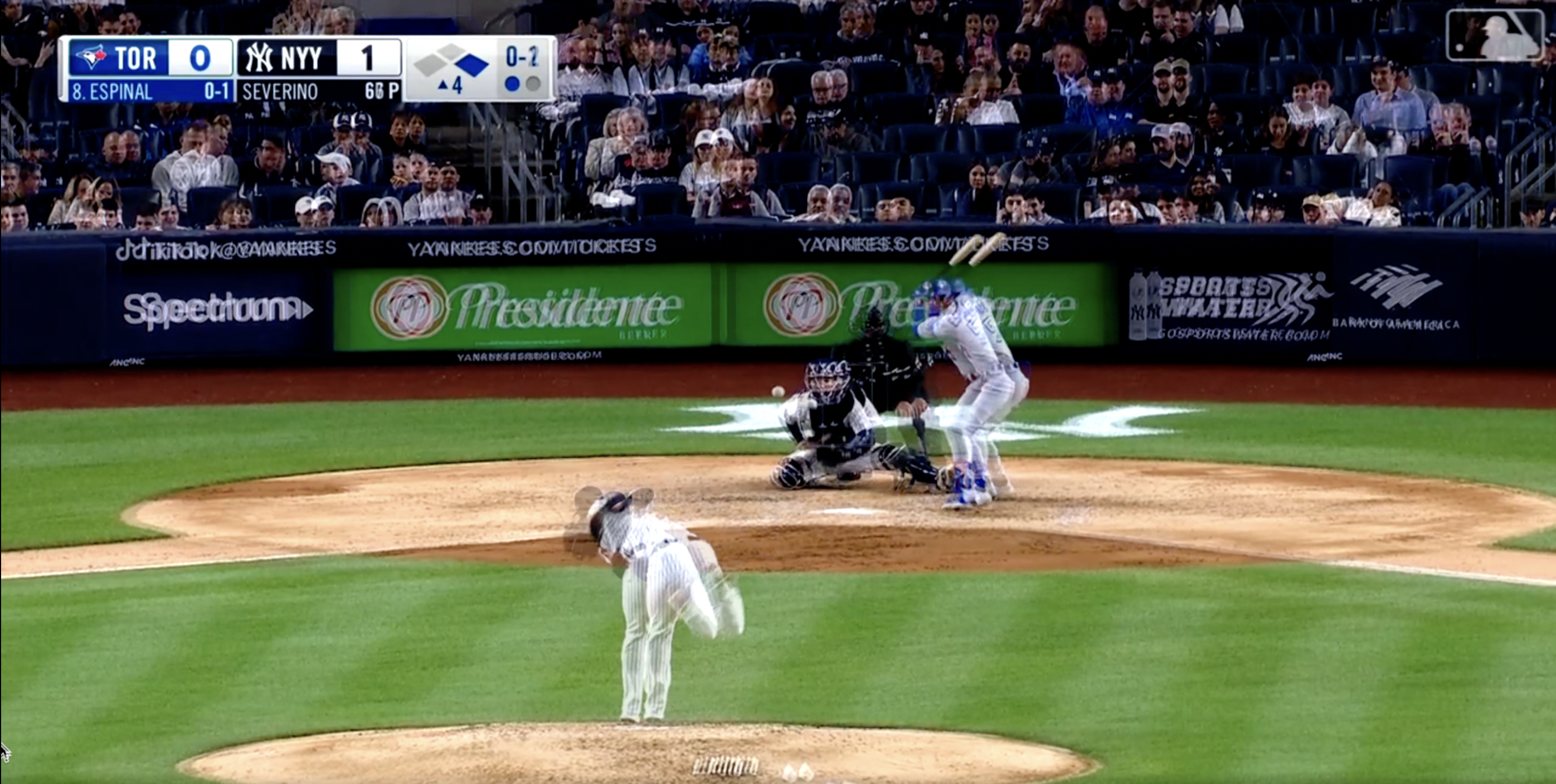 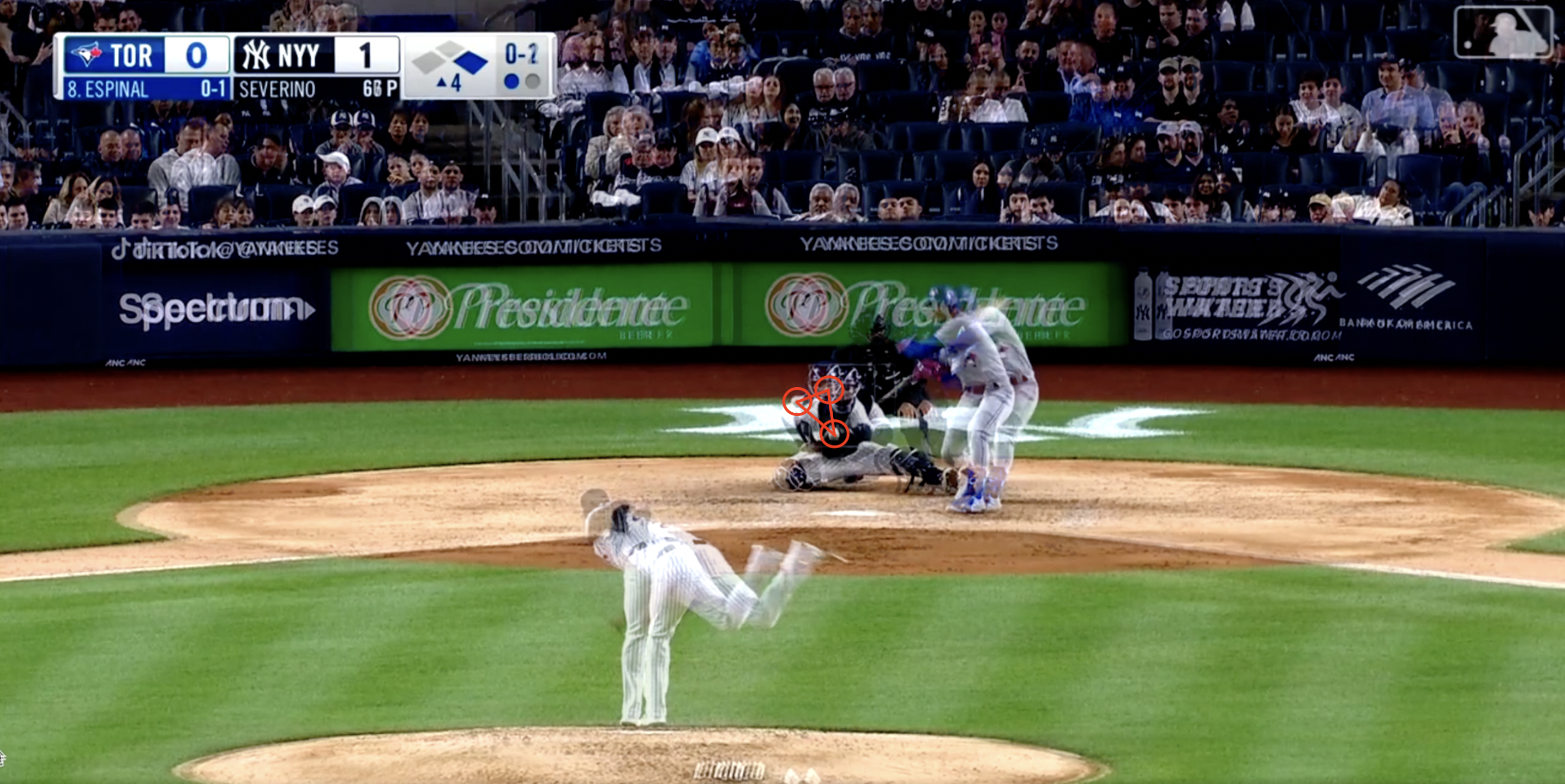 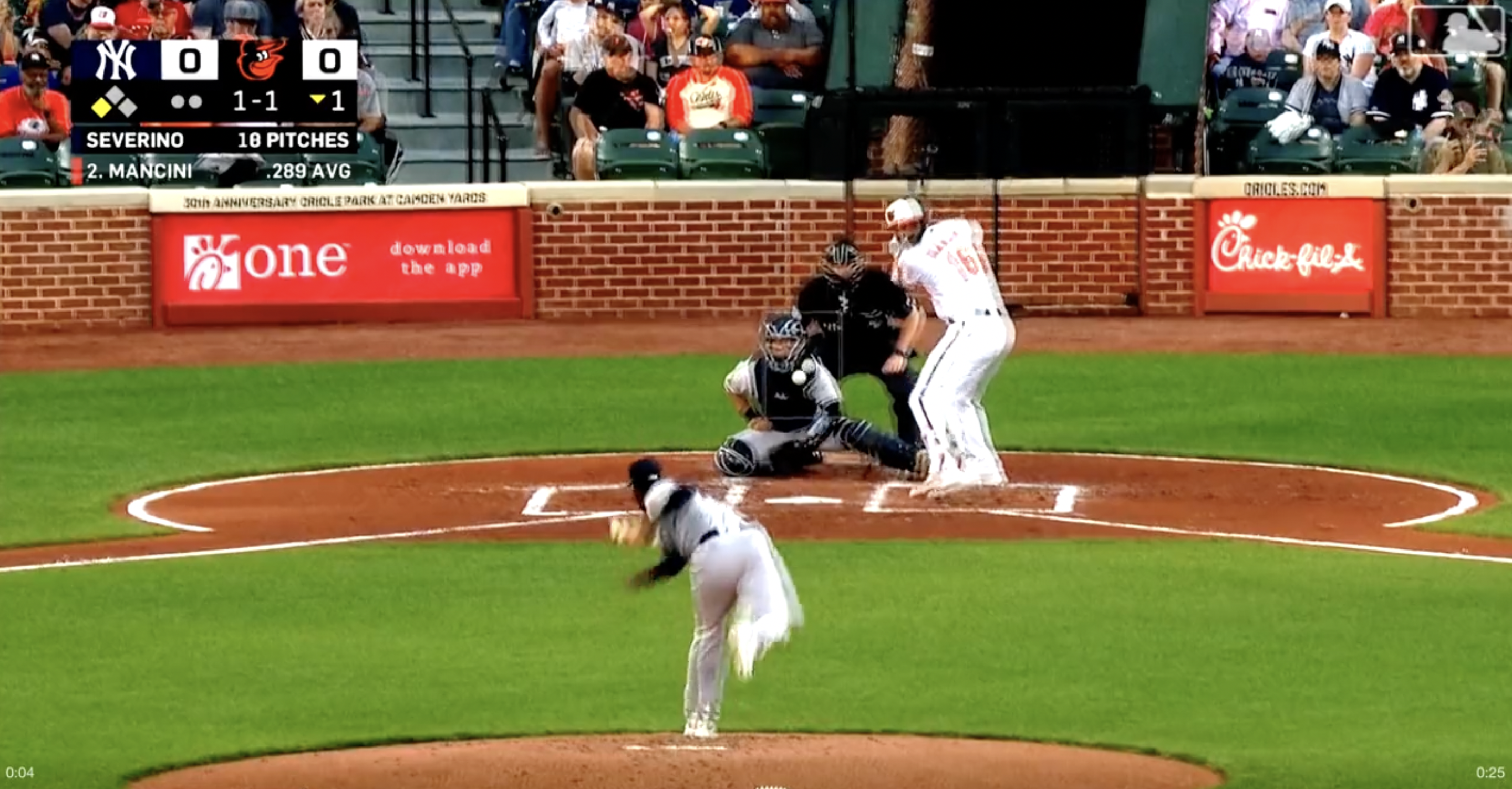 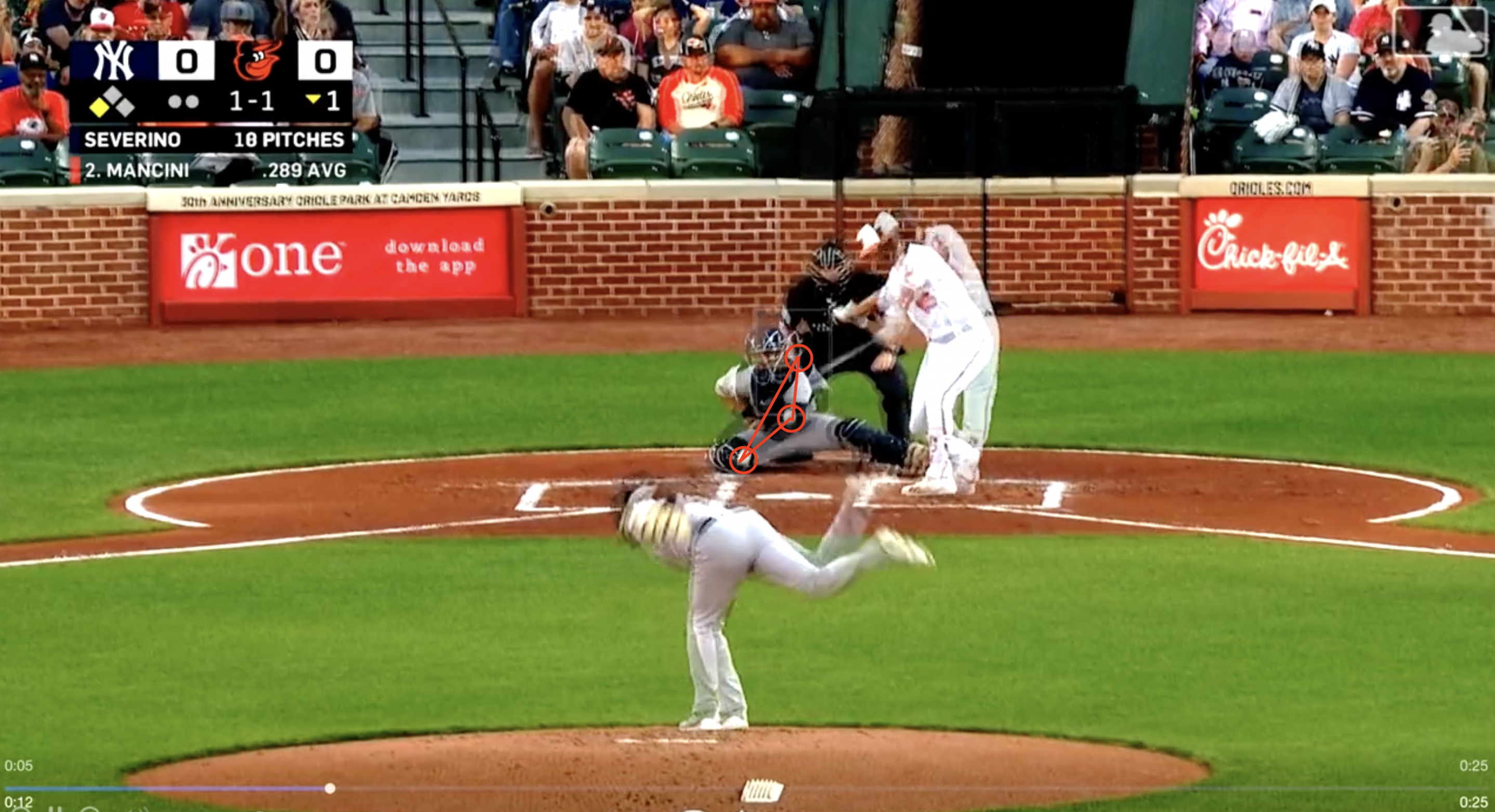 So not only is Severino tunneling these two pitches more effectively, look how much wider an area of plate coverage the hitter is responsible for! That’s where movement separation really comes into play. The hitter can no longer zero in on a defined attack region. Increasing a pitch’s opportunity space makes it all the less likely that the hitter can barrel a ball now that they are covering a wider region.

Luis Severino has been everything the Yankees could have hoped for and more through the early going. However, I still stick with my initial set of expectations for him from preseason. Because of the uncertainty created by his multiple missed seasons, I view him as the icing on top of the Yankees’ starting rotation cake. That being said, this evolution we are seeing from him and his ability to create separation between the movement profiles of his cutter and slider make it all the more possible that he can continue to succeed.