Fielding Independent Prism: How we see Gerrit Cole’s start against the O’s

What do you value in a pitching line?

Share All sharing options for: Fielding Independent Prism: How we see Gerrit Cole’s start against the O’s

How you felt about Gerrit Cole’s start Monday night probably boils down to how much weight you put on 13 minutes in the third inning. Cole gave up four hits and a fielder’s choice, four runs came in putting the Orioles up, at the time, 4-2.

Outside of those 13 minutes, Gerrit Cole threw seven innings, allowed three hits, no walks, 11 strikeouts and a solo home run. That is Cy Young-level performance, exactly what the nominal best pitcher in the AL should do against a team like Baltimore.

Something I’ve really tried to do is look for the bigger picture, the bigger story, than just a Statcast plot, and I think Cole’s start lets us talk about the bigger story. If you believe in process, that players can only control limited elements of their performance and surrender the rest to the seven fielders behind them and the vagaries of luck, you probably think Gerrit Cole was great on Monday. If you believe that players, ultimately, are responsible for the totality of their performance, that their line is theirs and theirs alone, then you probably think Cole stunk.

I’m in the former camp, and think that pitching, mostly, is about avoiding really serious mistakes — the hanging slider with two men on that ends up 450 feet away, that kinda thing. So with that in mind, lets look at the hits that did the damage on Monday night: 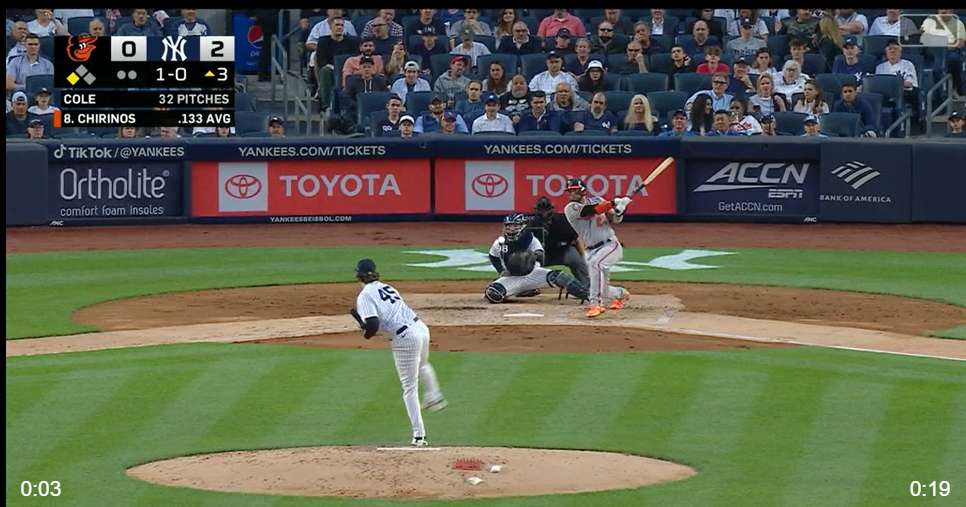 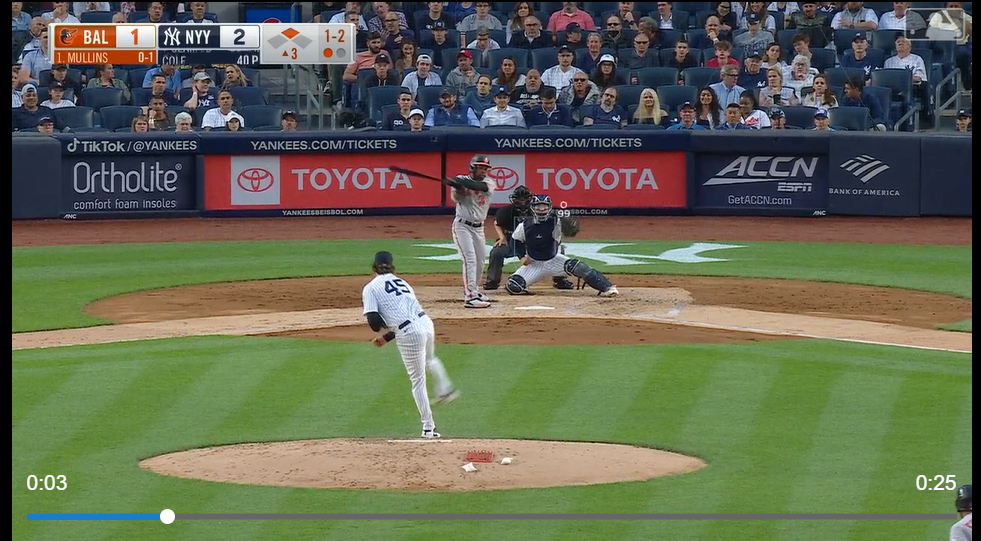 If I look at the first two hits, an RBI double from Robinson Chirinos and single from Cedric Mullins, are either of these pitches mistakes? First up, Chirinos hits 98 on the outside corner, then Mullins throws his bat into the other batters box to make contact with 99. I think you can tip your hat to good hitting, or you can chalk this up to dumb luck, but Cole doesn’t make any mistakes here.

There was, as always, chatter about pitch tipping, that the O’s knew what pitch was coming. This has kind of become a boogeyman in baseball commentary, where if a pitcher struggles, he must be tipping pitches. I tend to think that knowing the next pitch is a 99 mph fastball in the opposing batter’s box probably doesn’t help you hit it.

Mullins swipes second a pitch later, and it’s always hard to assign blame for stolen bases. Partially they’re on the pitcher, being able to hold runners and vary delivery times is a real skill. Partially they’re on the catcher, being able to receive and transfer the ball, then make a quick and accurate throw to the bag. Jose Trevino didn’t make a good throw to second, but he had a tough pitch to work with:

Now, Cole does make a mistake to Austin Hays, on a single that brings in two runs:

If we attach bad luck to those two hits above, maybe we can actually say Cole gets lucky here. Hays is on top of this slider, hitting a mid-height liner into center rather than putting the ball in Monument Park. 3-2.

Medium groundball to third, Marwin Gonzalez has a tough play if he wants to turn two but certainly doesn’t show much urgency getting the ball to second, and its 4-2 with two out.

So four balls in play, three of which there’s nothing really you can ask Cole to do, unless your standard for an ace is an 18-strikeout game. The Hays pitch is unquestionably a mistake, but that’s really it in the inning.

And after that, it was cruise control for Cole. The six outs he recorded in the fourth and fifth were all K’s. In a sense, this start is why FIP is such a valuable metric — the “luck” in that third inning pretty much cancels itself out. Two runners reach on bad luck, then Cole gets some of that luck back when Hays hits a single instead of a home run.

But when you strip that luck out, and focus purely on what Gerrit Cole has control over, he made one mistake to Hays, and another later to Ramón Urías, but even that pitch...

By definition, both popularly and for FIP, the vast majority of home runs come off mistakes by the pitcher. Is this pitch a mistake? It’s only 95, it’s not the best fastball Cole threw in that start, but it is above the zone. I don’t want this post to be seen as just making excuses or pulling the wool over people’s eyes with this start, so let’s say yes, Cole made a mistake and was punished for it.

I said above that your opinion of Cole’s start boils down to the 13 minutes of hell the third inning turned out to be. I’m no longer sure that’s true. Your opinion of the start probably boils down to those two pitches to Hays and Urias. Both were mistakes, but both cost Cole in different ways. Hays’ hurts because of sequencing — if Cole makes that same mistake with runners on the corners, and Hays puts the same swing on it, it’s only one run instead of two. If Hays elevates with nobody on, it’s a double or home run, still at best only one run.

So how do you see Cole’s start? I think that 11 strikeouts against no walks tells us a lot more about a guy’s talent level than the two mistakes he made over eight innings. It doesn’t erase the results of the game — Cole was charged with five earned runs and the Yankees lost, you don’t get to pull that L out of the column — but it gives us an indicator of how he’s going to perform going forward.

All a player can do is control a limited number of factors. For pitchers, this largely means strikeouts, walks, and home runs. Yes, there are certainly guys who can exercise more control over contact quality, but even then ... the Mountcastle ball was a soft groundball, the kind of thing you’d like to see when balls in play are engineered, and it cost the Yankees a run.

Gerrit Cole is going to be just fine — and by that I mean he’s going to be more than just fine. In his last six starts, he’s striking out ten times as many hitters as he’s walking. 13 minutes, or two batted balls, were the difference between him absolutely icing the Orioles and a whole new round of NOT AN ACE commentary. The 10:1 K:BB rate is more sustainable than those 13 minutes, so keep your Gerrit Cole stock.