The Yankees’ bullpen is incredible. It’s hard to argue that any other team can compete with it. At this point in the season, they lead Major League Baseball with 2.2 fWAR and no other American League team is within half a win. They’re getting consistently great performances from multiple relievers in a variety of situations. However, the team has done that all without its best reliever in 2021, Jonathan Loáisiga.

Loáisiga’s breakout 2021 season was one of the best performances from a Yankee reliver not named Mariano Rivera. He was second in the American League in fWAR behind only Liam Hendriks and had a 2.17 ERA in 70.2 IP. Who knows where the team would’ve been last year without him shutting the door in so many games. Nobody could have foreseen what has happened in his first 13.2 innings of 2022 — his 5.93 ERA is shocking.

Loáisiga’s command is gone, his sinker is getting hit a ton, and he just doesn’t have the fire we saw in 2021. It’s tough to diagnose exactly what is going on in terms of process, but it is quite clear the sinker has been an issue. There aren’t any vast differences with any other pitch. The movement on his curveball has been altered, but I’m not comfortable saying that is a major reason for his struggles, given he has only given up one hit on the pitch.

The sinker is the real head scratcher. Last year, the xBA and xSLG on the pitch were .215 and .274, respectively. No hitter could elevate the pitch. Loáisiga didn’t give up a single home run and the average launch angle was -5. I know that isn’t anything too insightful, but it’s important to address when you consider the pitch has already been taken deep twice and the xSLG has shot up to .622. It’s getting corked and it’s not clear why … or is it? 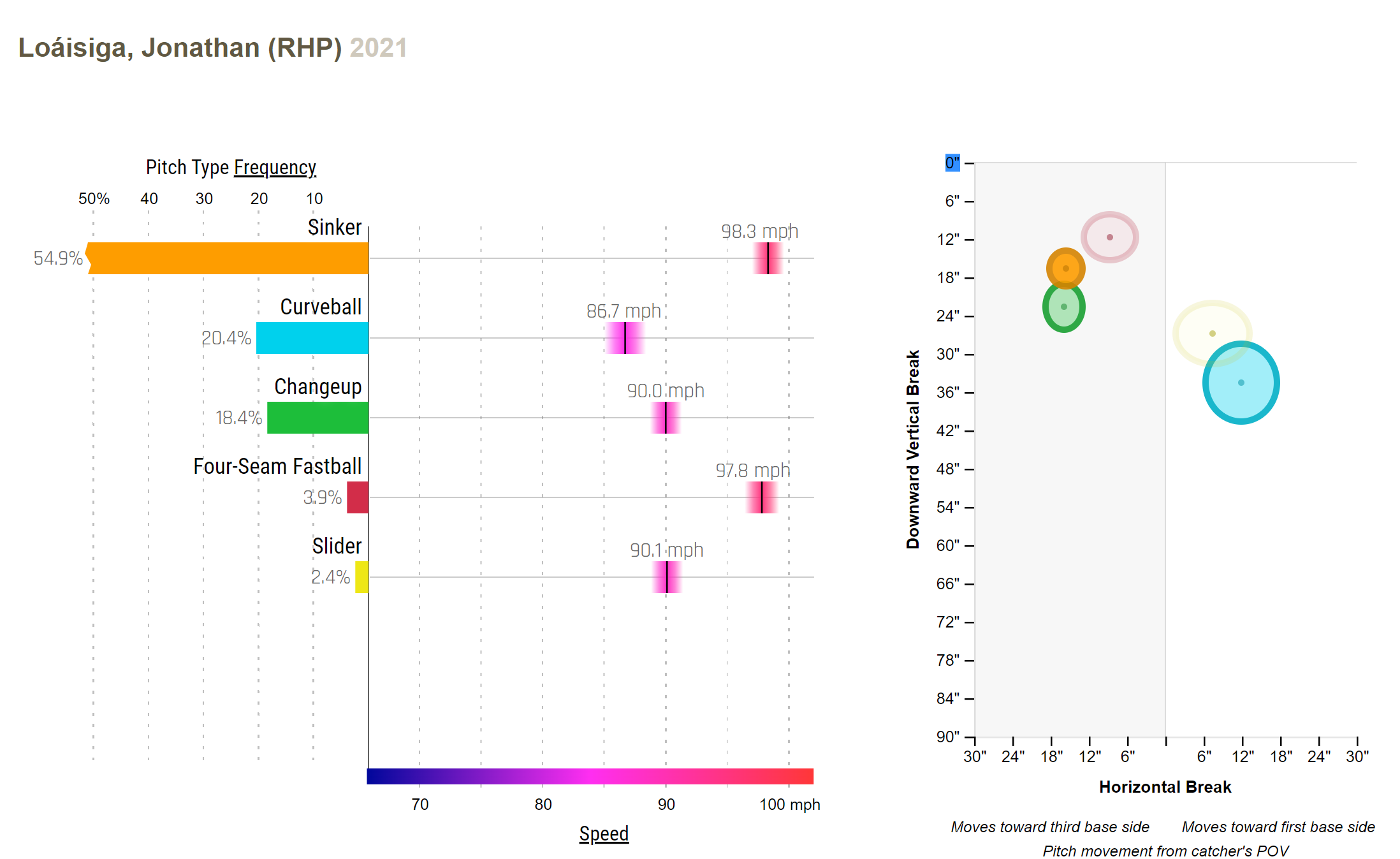 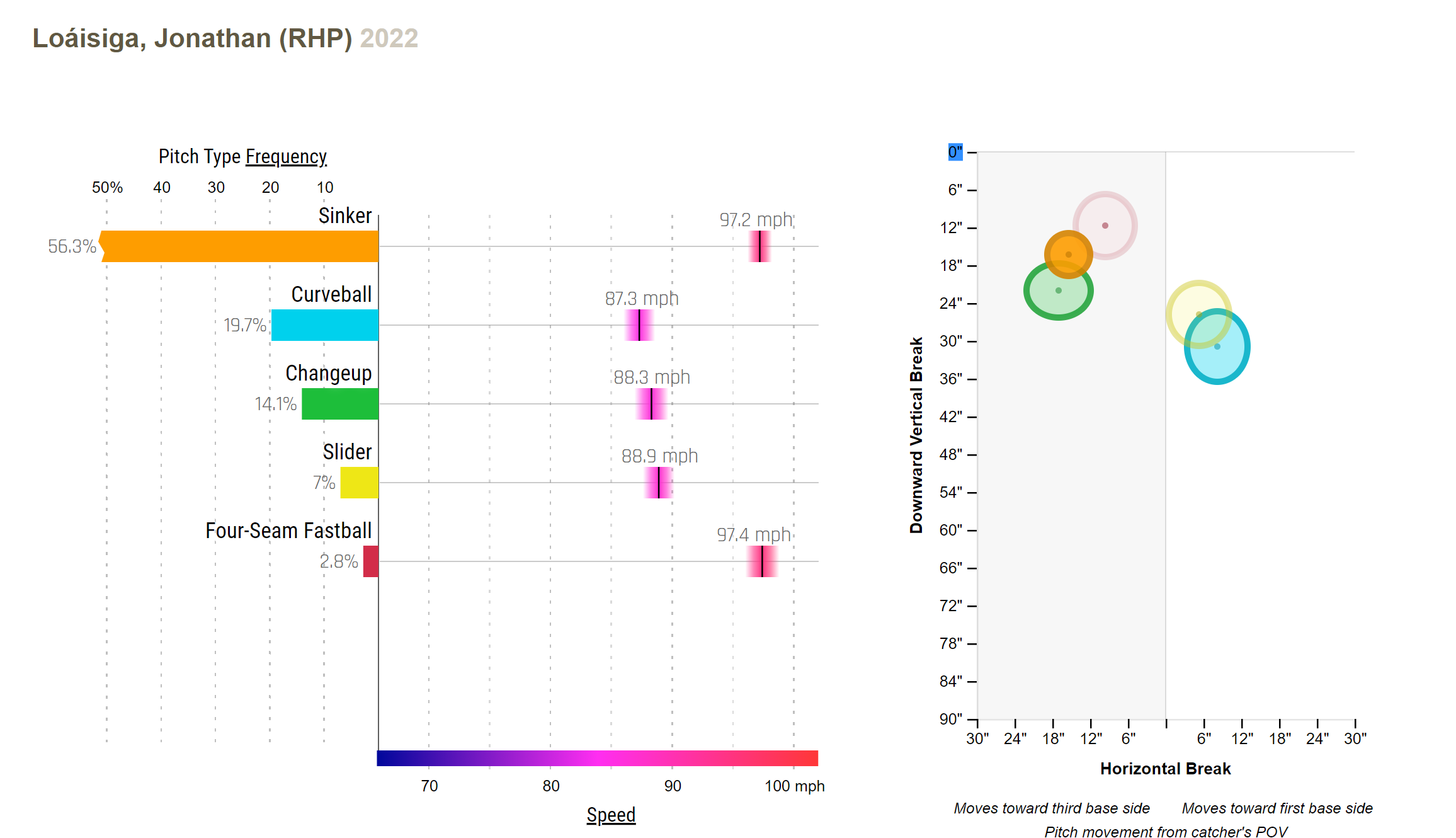 Like I said before, the movement profile isn’t all that different. The curveball has increased its downward break, but the sinker looks so similar, making me confused as to why it’s getting hit so much. Let’s check out the control on the pitch. 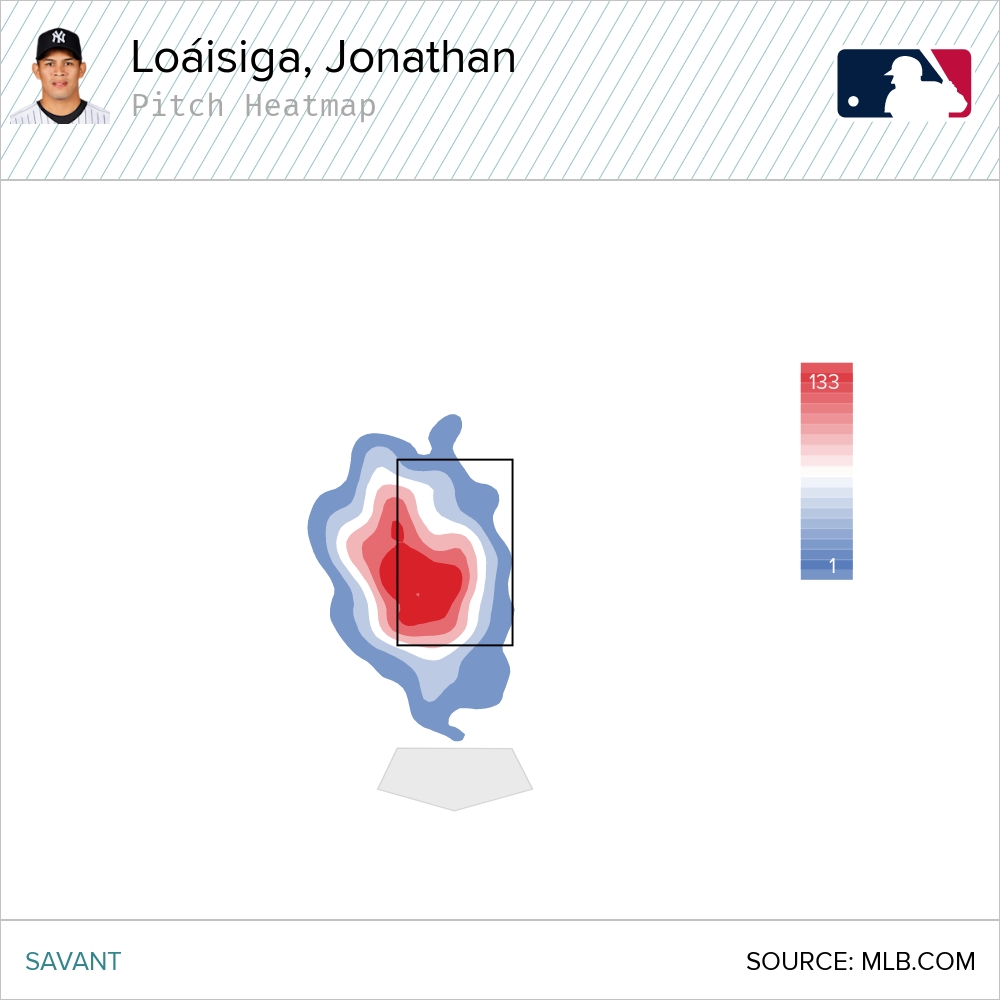 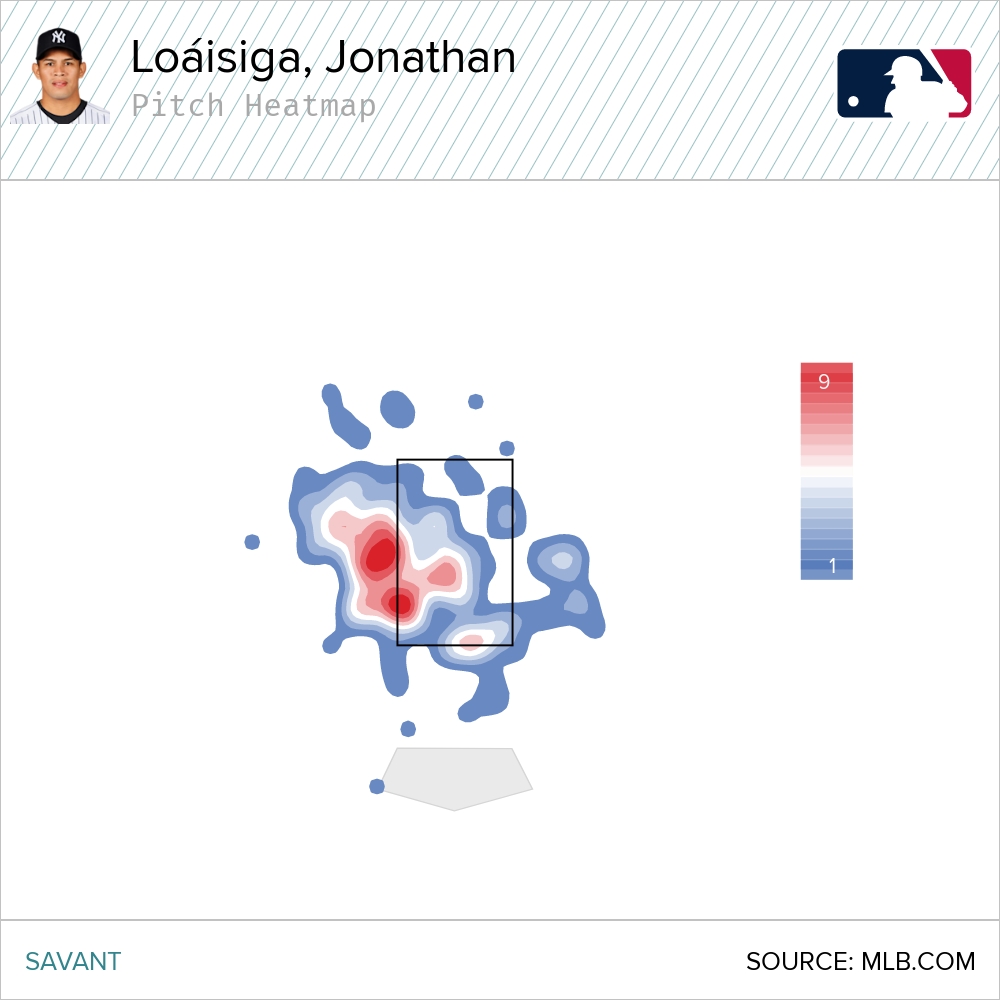 Well, this certainly tells us more. Loáisiga lived on the low, arm-side part of the plate last year. He dotted this pitch more consistently than any reliever in baseball. It would run across the zone and spot in the lower third either yielding a ground ball or called strike with ease. Now, the pitch is being located a little more all over the place in general, but most importantly, it’s running more to the middle height, arm side rather than consistently lower in the zone.

Don’t get me wrong; this doesn’t explain it all. The pitch is moving so similarly that you wouldn’t expect the level of difference in result, but this is how baseball can be. It’s a game of centimeters.

These pitches are thrown at almost identical velocities and locations, but one seems much better than the other. You may say I’m nitpicking here, but there is a reason why. Despite the pitches being nearly identical, they enter the zone differently enough to yield a barrel, versus a ground ball.

Now, these differentials are small, but again, baseball is a game of centimeters. Courtesy of Alex Chamberlain’s pitcher leaderboard, Loáisiga’s extension has decreased from 6.6 feet to 6.4 feet since last year. As you’d expect that has raised his release point so slightly from 5.5 feet to 5.7 feet and it’s changed his horizontal release point from -2.1 feet to -1.6. In summary, his decrease in extension has raised his release point and moved it from left to right by about half a foot. Here is a visual reference. 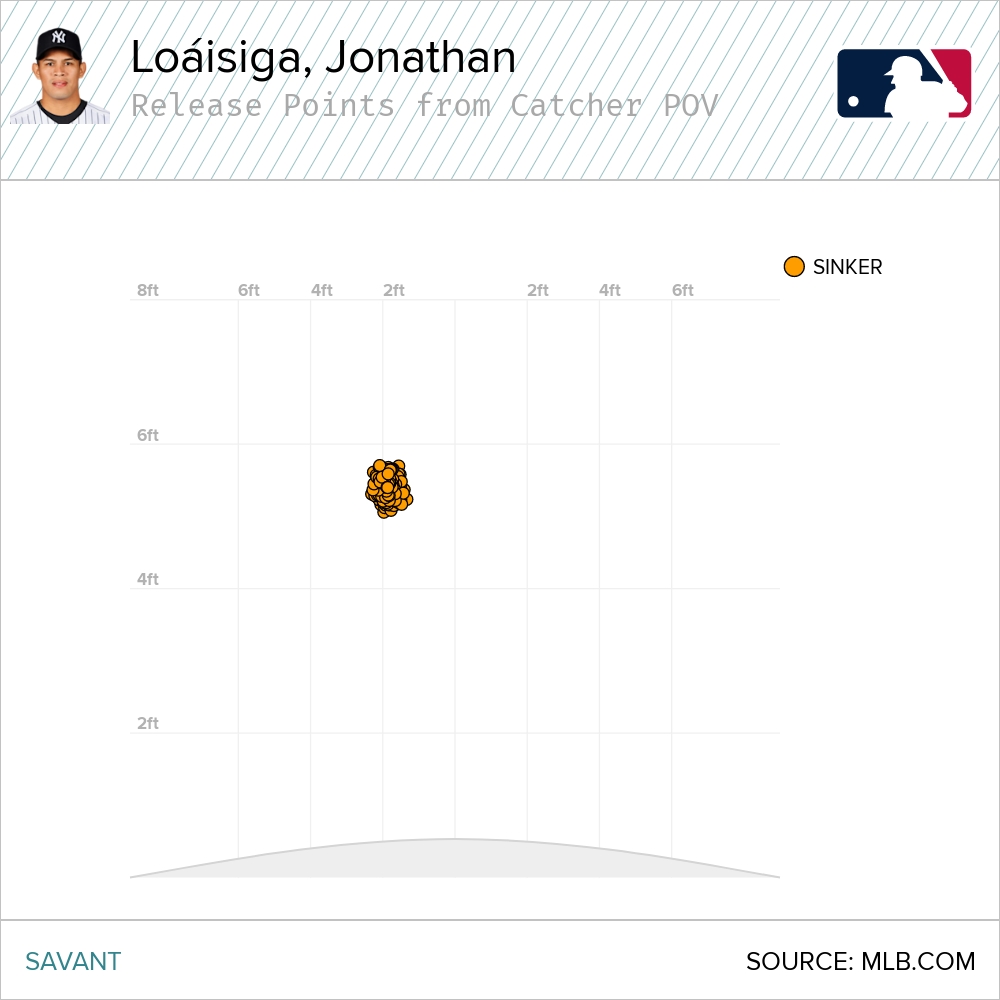 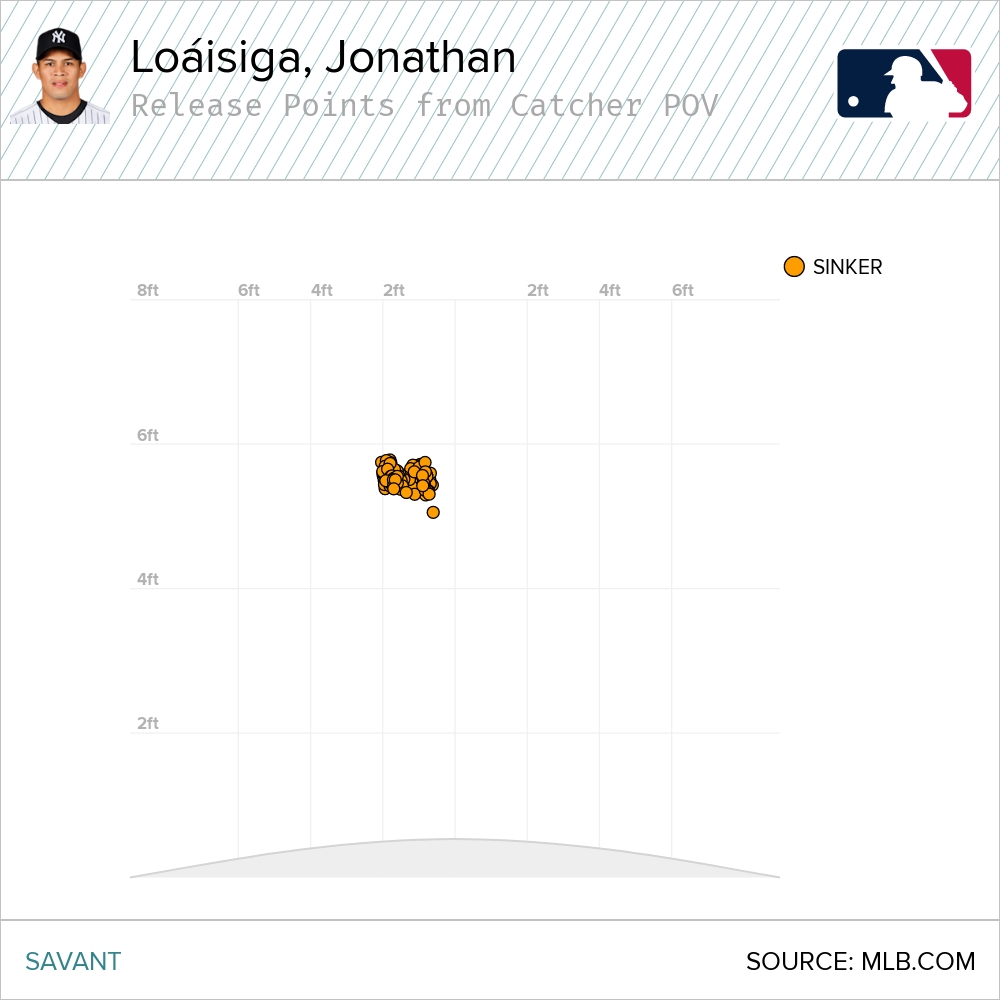 What does that do to a pitch like a sinker? It alters the way it moves across home plate, even if the movement profile is pretty much the same. If you’re not familiar with horizontal approach angle (HAA), then you should be. It’s a number that tells you how the ball entered the zone horizontally. Because of Loáisiga’s slight change in release, his HAA has changed by half a degree from -0.2 degrees to 0.3 degrees. When the ball is entering the zone, it’s running a little more into a righty than it did last year.

This small difference is enough for Loáisiga’s feel or command of the pitch to change from dotting low, arm-side to middle, arm-side. A very classic notion of a sinker is you don’t want it to run right into the barrel of a hitter, and that is exactly what is happening with Loáisiga. The run is at the wrong time and is finding barrels at a rate much higher than he is used to.

So, what does this all mean? The easy answer is he needs to get his release point back to where it was in 2021. The more complicated answer is he needs to make a slight mechanical adjustment (or two) to do so. To be frank, I’m not worried about him doing this. Matt Blake has proven he can help pitchers on the fly. The fact that Loáisiga’s movement profile and velocity have not drastically changed is great. If all he needs is a mechanical adjustment to fix his release point, then I wouldn’t be surprised if he starts shoving very soon after a few productive bullpen sessions. If that catapults him back to his 2021 self, this Yankees bullpen will be even more intimidating than it already is.