What to watch for from Luis Gil tonight

The flame-throwing Yankees rookie makes his first big league start of the season tonight against the White Sox.

Share All sharing options for: What to watch for from Luis Gil tonight

When the Yankees announced they were calling up Luis Gil to make a spot start tonight in the series opener against the White Sox, the move was met with some initial skepticism. Why were the Yankees calling up the struggling Gil when Clarke Schmidt had performed more than admirably in his four appearances for the Bombers this season? Of course, the 15-day option period disqualifies Schmidt from being called up so soon after his demotion, which left Gil as the best remaining option at Triple-A.

I mentioned Gil was struggling and, well, even that might’ve been generous. In five starts, he owns a 9.53 ERA and 14.5 percent walk rate in 17 innings. That said, he’s been the victim of some bad luck — his 4.36 xFIP is encouraging and the 47.8 percent strand rate and 27.8 percent home run per fly ball rate are sure to regress toward career averages. And the strikeout stuff is still ever-present.

Gil dazzled in his MLB debut last year, tossing six scoreless with six punchouts against the Orioles. He memorably became the first pitcher in MLB history to log three straight scoreless outings to begin his career, creating unconfined excitement over the possibilities for the young pitcher. Those expectations cooled off when he stumbled a bit in his next three outings, but there’s still plenty of reason to be encouraged by the 23-year-old righty. Here’s what I’ll be looking for when he takes the mound in a few hours.

As I alluded to earlier, the biggest concern with Gil has always been his control issues. It’s likely the most important factor in determining the trajectory of his career. He was walked over ten percent of batters at every stop during his professional career with a career mark just south of 15 percent. Fortunately for him, the White Sox are walking the least of any team in baseball, so he might just be drawing the right matchup at the right time.

2. Velocity and life on the four-seamer

Gil’s fastball is his calling card and the reason why he remains so high on the organizational prospect ranking lists. Even in his brief 2021 MLB cameo, his four-seamer graded out as one of the best in the league, with 88th percentile average velocity and 90th percentile spin. The rise he gets with the pitch puts it into the truly elite tier of four-seamers. The question is whether he can command it at the top of the zone, and whether he can continue to throw the A-plus version of the pitch throughout a start. As fatigue crept in during his starts last season, the fastball flattened out and became eminently more hittable, despite the sustained velocity.

Even though this is the third item on the list, it is the aspect of his start I will be paying attention to most closely. Gil’s slider is what transforms him from simply a high-velo arm to a legitimate strikeout threat. It exhibits above-average horizontal movement, and the 11 mph velocity differential off the fastball induces a ton of early swings. The problem is his inability to repeat his mechanics on the pitch.

Here is a comparison of Gil’s release points with the slider compared to Gerrit Cole. You can see how Cole’s pitches are much more tightly grouped: 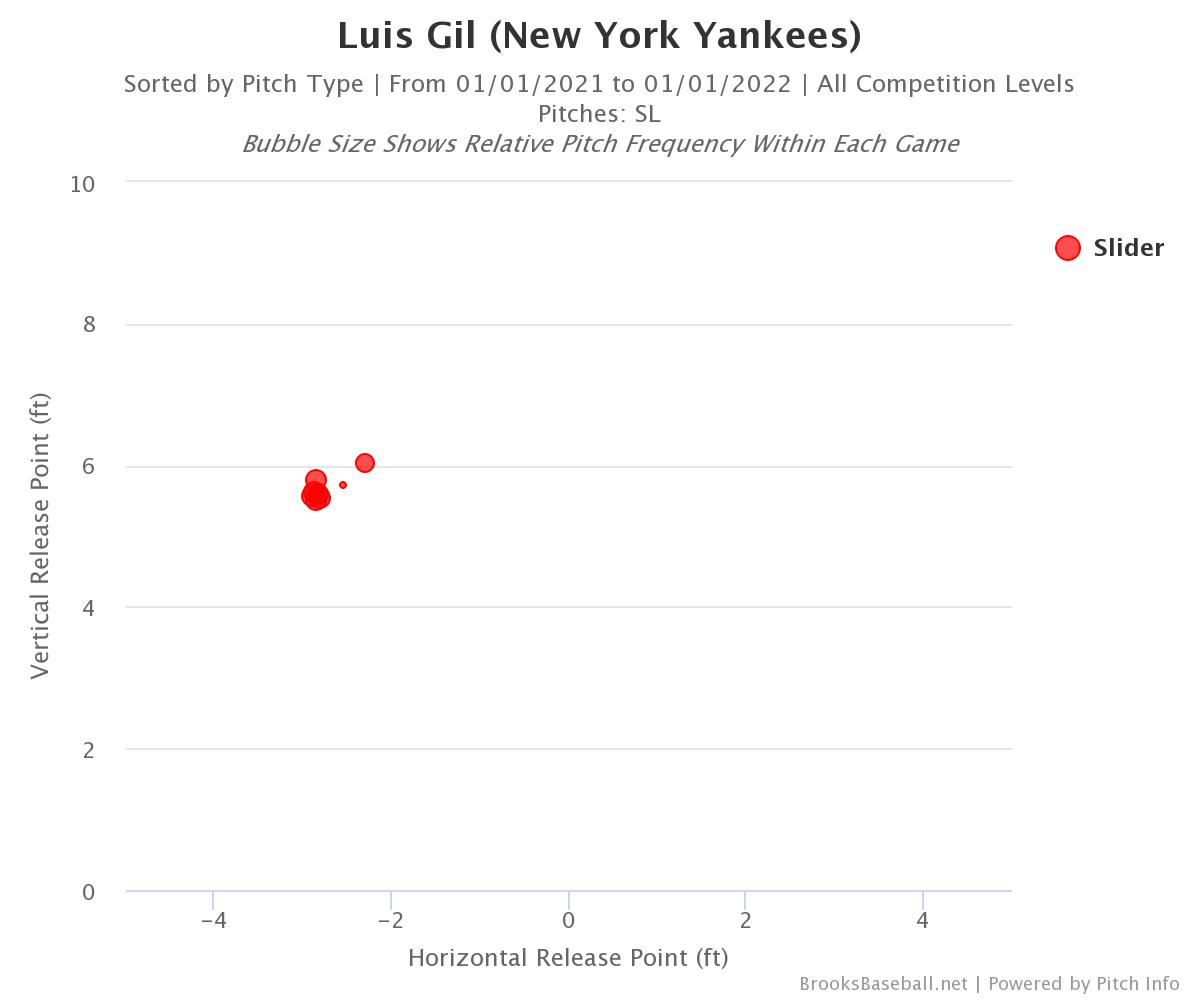 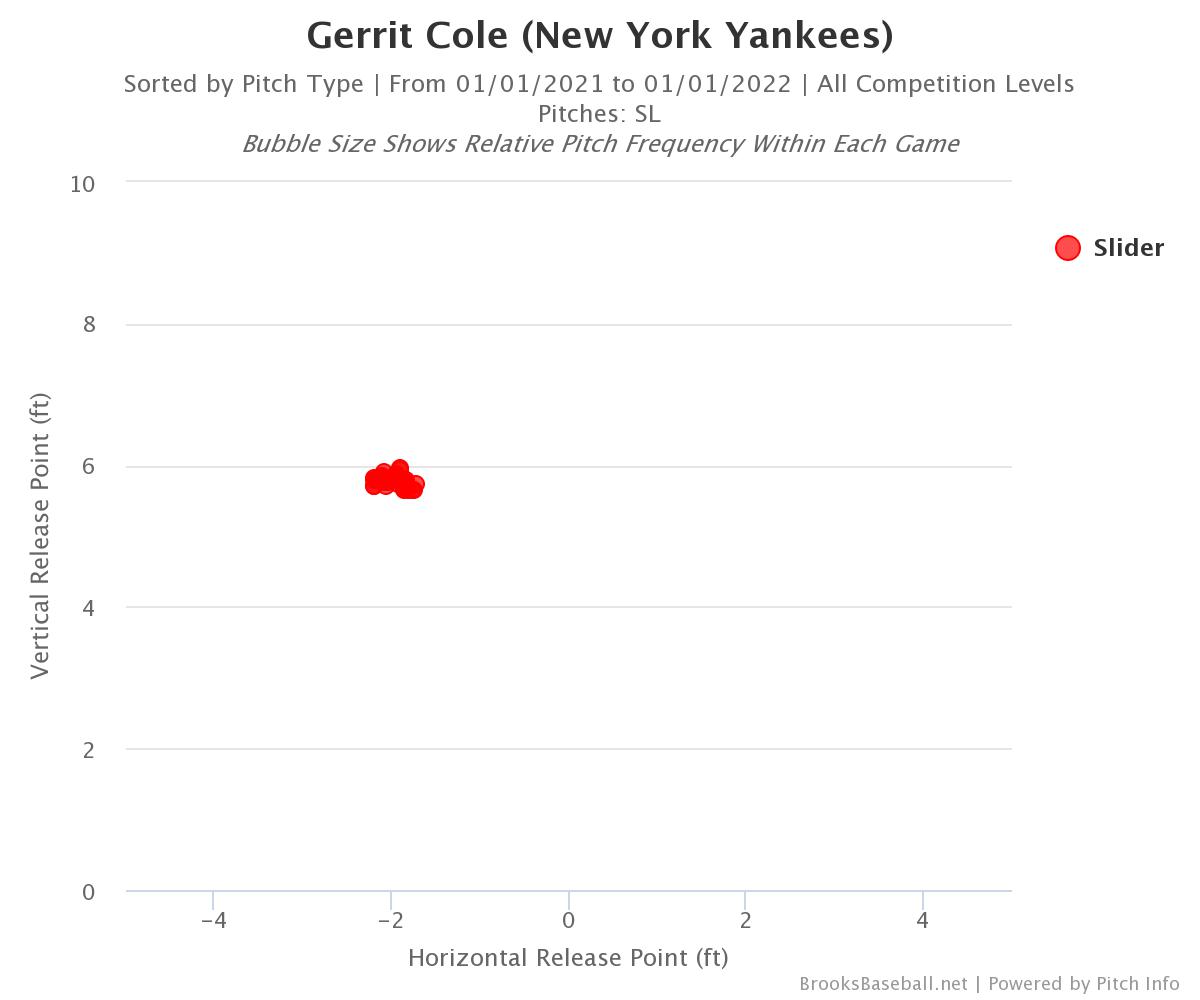 As a result of this wider variation in release points, Gil struggles to achieve a consistent movement profile pitch-to-pitch. Some of his sliders had little-to-no downward tilt at all — a proverbial cement mixer: 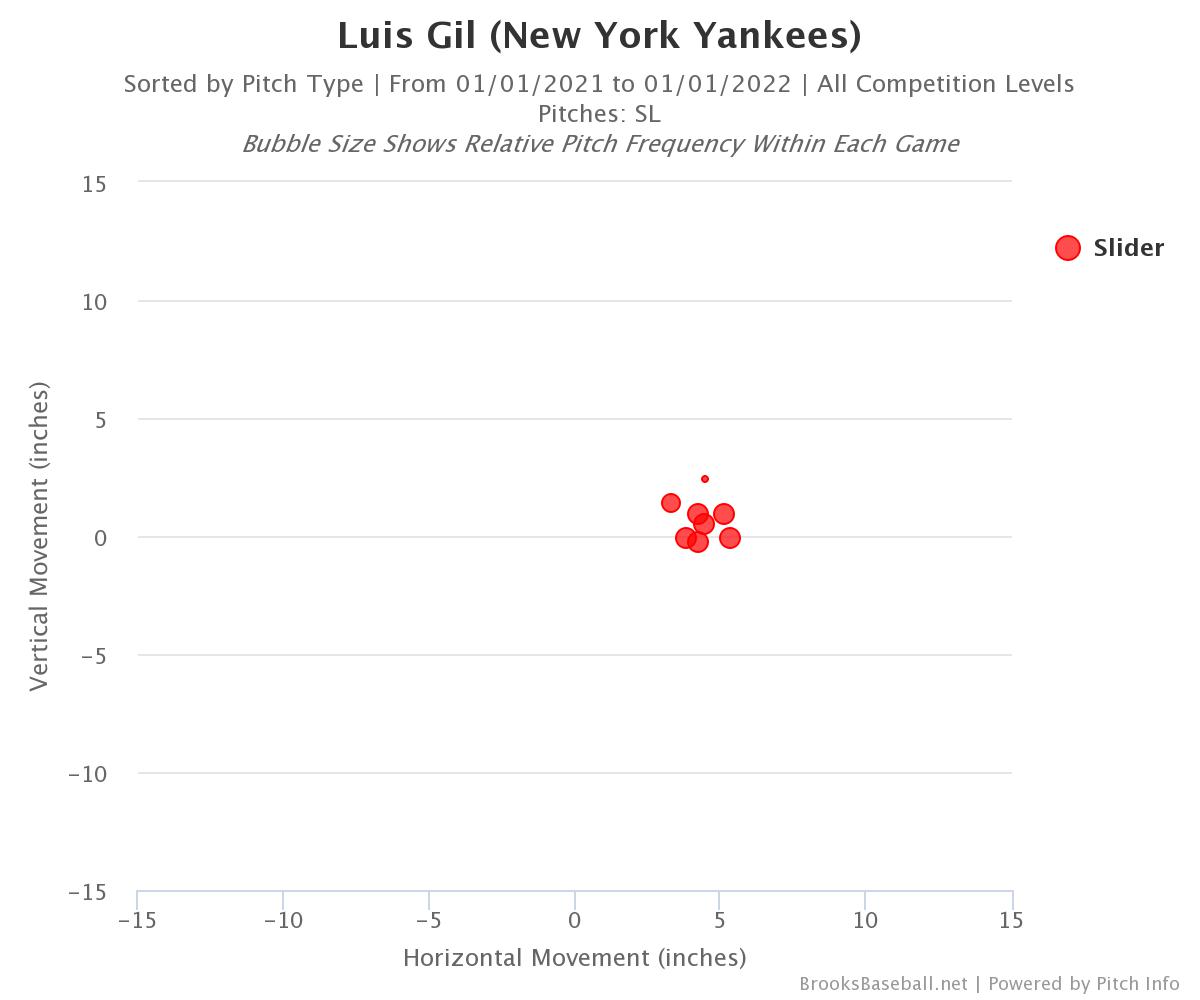 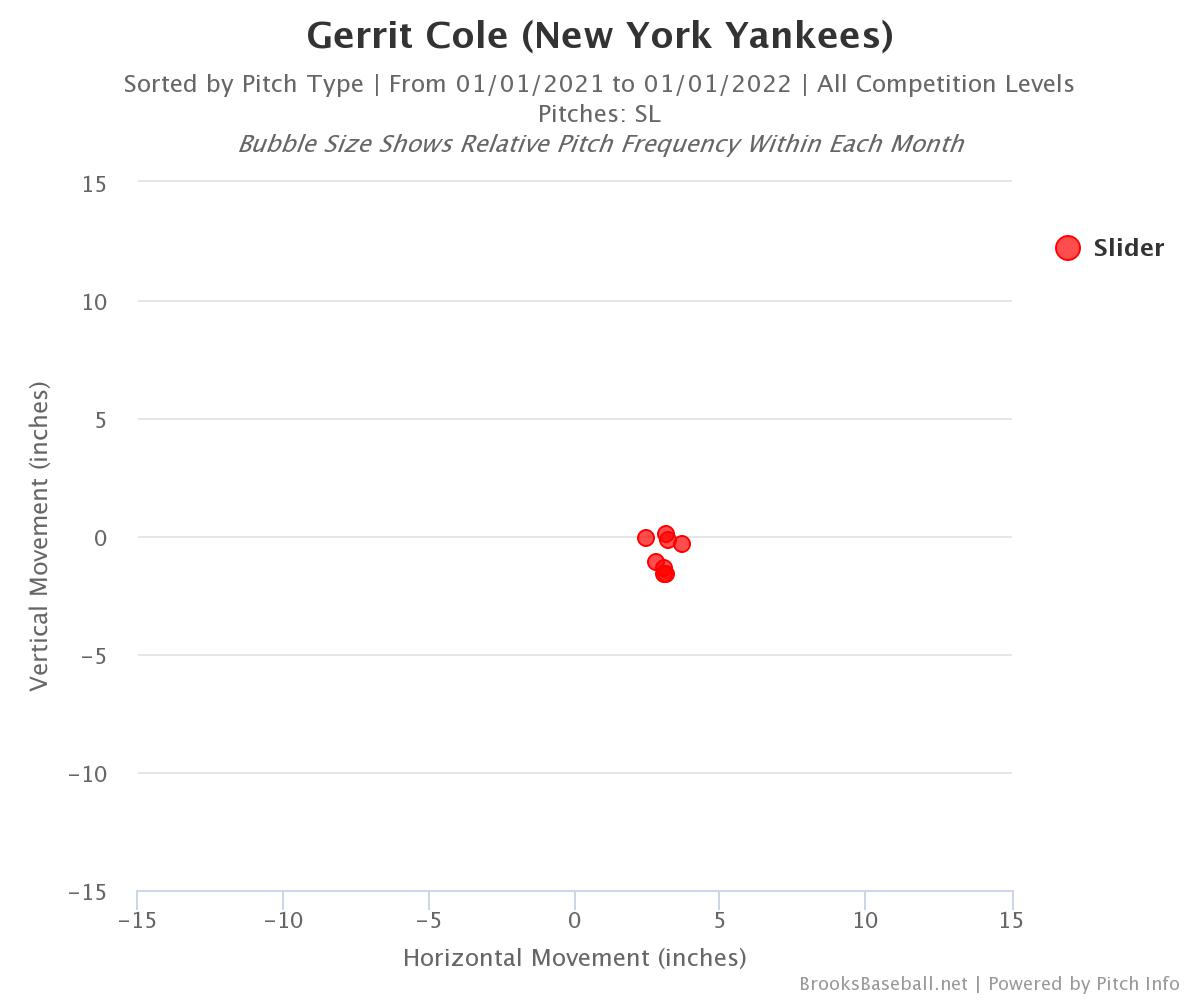 Now, in no way am I implying that I expect Gil to match Cole mechanically. The comparison is more to illustrate the effect of an inconsistent release point with the slider. Moreover, the biggest issue with his variable mechanics is the loss of command:

As with any young player, I am far more interested in process than results. Sure, he got the strikeout on all five pitches, but I don’t think it’s a stretch to say that the quintet were poorly executed sliders. Most of these sliders were supposed to be down and off the plate gloveside, yet they ended up middle-up. He’s missing his target by roughly two feet each time, and it’s only the hitters’ utter surprise at being gifted a cookie slider that prevents them from doing damage. He cannot afford to leave too many sliders in hittable zones against a White Sox lineup that can mash on their day.

4. Shape and location of changeup

It’s been widely agreed that in order for Gil to have any shot at sticking as a major league starter, he’ll need to incorporate a third pitch. He flashed a high-velocity changeup during his call-up last year, but many evaluators are wary of the offering. Like with the slider, his inability to repeat his mechanics means he cannot locate the pitch with any degree of certainty. However, he did feature a few good ones with decent side-to-side break, so I’ll be interested to see how confident he is to go to the pitch in positive count leverage situations against lefties.

This sentiment applies to any pitcher, but in 2021 it felt like Gil could get to 0-2 without much difficulty, but then would waste a pitch or two, allowing the hitter back into the count and ballooning the pitch count. Rather than try to hoof the hardest fastball of his life by the hitter, I’d like to see him throw more competitive pitches closer to the zone. He has the natural ability, so there’s no need to overthrow the fastball in advantageous counts — just trust the stuff.