Has a change in hitting mechanics helped Isiah Kiner-Falefa take the next step?

Isiah Kiner-Falefa is off to a better start after adding a leg kick in the offseason to alternate with a more familiar toe-tap approach.

Share All sharing options for: Has a change in hitting mechanics helped Isiah Kiner-Falefa take the next step?

Defying the expectations of some skeptics coming into this season, Isiah Kiner-Falefa has been off to a hot start. Through 15 games and 54 plate appearances, he has slashed .300/.333/.380 for an OPS of .713 and a wRC+ of 112. To put his performance into perspective, IKF has been a below-league-average hitter for his career. His best offensive season was in 2020, where he produced a 94 wRC+. Additionally, last season, he had OPS of .670 and a wRC+ of 85.

So, is Kiner-Falefa’s hot start to kick off 2022 an anomaly, or will he return to his below-league-average norm at the plate in time? There is no way to tell for sure, but some of his underlying metrics suggest that this might be real. 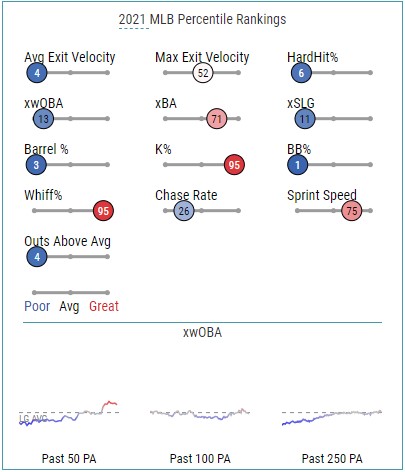 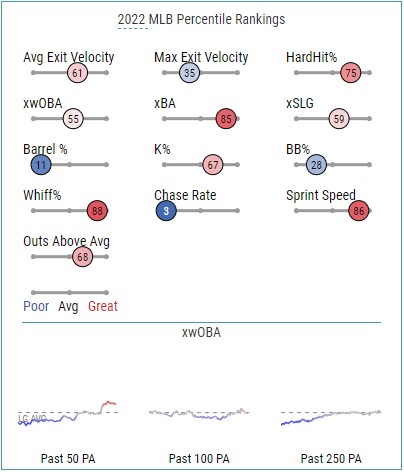 From the charts above, it’s evident that IKF has improved his average exit velocity and hard-hit percentage compared to the rest of the league. Additionally, by increasing these attributes, he has seen a jump in his expected batting average and expected slugging percentage. At the same time, Kiner-Falefa has continued to post an elite whiff percentage and maintain an above-average strikeout rate, though the latter has declined a bit from 2021.

I’m going to insert a massive caveat here, as it is still very early in the season, and I don’t want to equate a hot stretch to genuine player progression. However, looking at Kiner-Falefa last season at the plate compared to this season, we see a big difference: he has added a leg kick. Below is a video of IKF hitting in 2021 and another of him hitting this season.

It’s easy to see that in 2021 he does not have a leg kick, but that this season he has added a large leg kick to use on some of his swings.

*At times in 2021, IKF utilized a toe tap, but this seems to be something he added later that season. I will speak more about his toe tap later.

Furthermore, as others have reported, Kiner-Falefa spent the offseason working with Dodgers slugger Justin Turner. This is interesting because Turner was 29 years old before he made the adjustments necessary to succeed as a major leaguer. Many fans may remember his early days with the Mets and how large of a leap he took in the 2014 season when he joined the Dodgers. If IKF can make even a fraction of that transformation in his career, it could prove very valuable to the Yankees this season.

Below, I have included a video of Turner hitting this season. If you look at the video below and compare it to Kiner-Falefa’s new swing above, the similarities between the two are quite clear:

While IKF has changed his swing this season, it’s also important to note that he is not always using it. Specifically, you will see that early in games and in low-leverage situations, IKF is most often using his leg kick. Below is a reel of examples from each of the past five games:

However in the fifth inning or later of games when the go-ahead or tying run is on base, IKF has had four at-bats that resulted in a hit. Of those four hits, he only one had his leg kick in one of them. In the other three at-bats, Kiner-Falefa used his toe tap:

I mentioned earlier that Kiner-Falefa developed a toe tap at some point last season and he appears to have retained it for at-bats in which he is prioritizing contact. Like Anthony Rizzo, IKF appears to be the kind of hitter who prioritizes situational hitting and makes adjustments to his hitting mechanics accordingly.

The best example of this was Kiner-Falefa’s RBI double against Guardians closer Emmanuel Clase. The game was on the line, and the shortstop delivered with a toe-tap-aided hit. He does this to more quickly set himself into a position to make contact in this situation:

If Kiner-Falefa’s changes prove to be successful this season, it could be big for the Yankees. Specifically, if these mechanical adjustments allow him to hit the ball harder, we can expect a higher batting average and slugging percentage for IKF. Additionally, if he can perform as a league-average hitter this season while providing solid defense, he can prove to be a smart pickup for the Yankees this season.

At the same time, fans who long for players to adjust their approach based on in-game situations should quickly become fans of IKF for his approach in the batter’s box. Only time will tell if IKF’s adjustments pay dividends this season and prove to be improvements rather than simply a hot streak.