Clarke Schmidt is showing signs of a breakout

Share All sharing options for: Clarke Schmidt is showing signs of a breakout

The life of a pitcher can be a rollercoaster before they even step foot on a major league mound. Clarke Schmidt might be the best example out of any Yankee pitcher. Out of the University of South Carolina, he was a sure-fire first-rounder. Like many young hard-throwers, he fell victim to Tommy John surgery before he was drafted, leading to his fall to the Yankees.

Schmidt was only ever good in the minor leagues. He found himself in the Top 100 of some prospect lists, but the Yankees were always high on his potential, likely higher than the industry average. His injury battles followed him through the minor leagues and delayed his opportunities to contribute, but after another long elbow recovery in 2021, it looks like he is finally here to stay in the big leagues. In 7.1 innings thus far, he has been lights out, posting a 1.23 ERA and .120 batting average against.

It’s not that Schmidt has remade himself. He is throwing all the same pitches. Like some of his fellow pitchers, he has done a better job at maximizing what his body can do. His movement on his pitches has ticked up, along with his velocity. On top of that, Schmidt’s command is improved as well. That can be expected with improved health and more consistent reps. 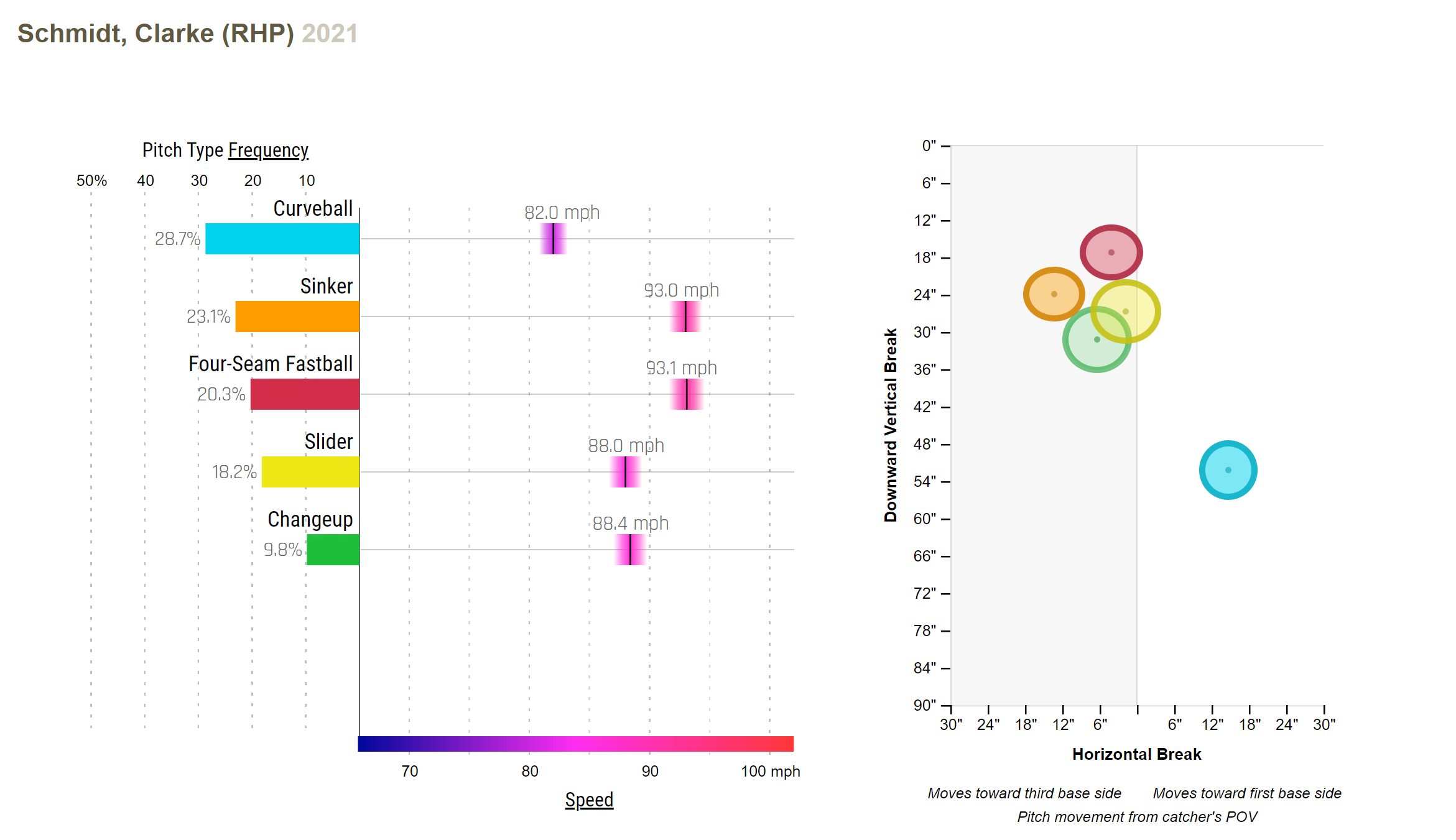 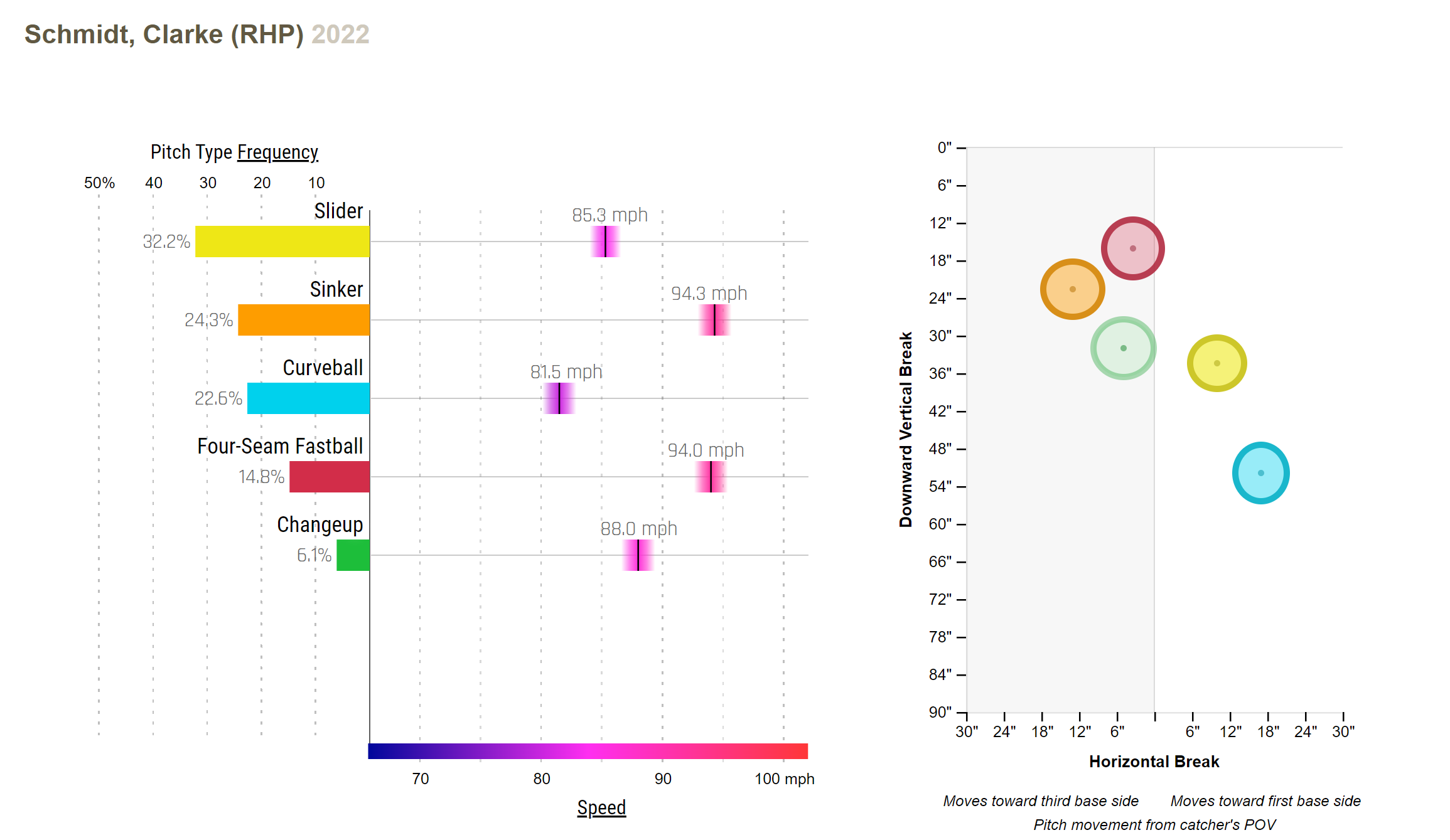 This is always a good place to start. Pitchers who throw two breaking balls get the most out of both when the movement profiles are separated. Coming up, Schmidt’s bread and butter was always his curveball. When it’s on, it has crazy bite, and the frisbee type movement that is becoming more normal in the big leagues. He threw it more than any other pitch for his entire career until 2022. His slider now reigns at the top his arsenal.

Last year, Schmidt’s slider was a decent pitch. As seen in the visual above, its movement didn’t separate much from the other pitches, but with a ton of added horizontal movement, it’s become his primary weapon. So far, the pitch has a 50 percent whiff rate and has been a great addition to his arsenal. Let’s look at how the pitch has changed from 2021 to this year.

This is a decent pitch! It was good enough to get a swing and miss, but it doesn’t have too exciting of a movement profile to be frank. It’s a gyro slider with little to no horizontal break.

Now, this is a weapon. The pitch has more vertical drop and significantly more sweep. When comparing these two pitches, they start at almost exactly the same point, but one breaks out of the zone with a slightly lower velocity and produces a silly swing from a great hitter. It’s night and day.

The pitch is different enough from the curveball so that hitters can’t just rule out swinging against the big breaker. While both have significant side sweeping action, the curveball’s downward break makes it considerably different from the slider and it’s thrown four mph slower on average. It’s perfect for locating under the zone and the slider is perfect for locating horizontally out of the zone.

In terms of velocity, Schmidt has created additional separation between his pitches. In 2021, his changeup and slider were thrown at 88 mph each. With a three-mph decrease in the slider in 2022, he has now added a velo adjustment for hitters. The fastballs are at about 94, followed by the changeup at 88, then the slider and curve at 85 and 81 respectively. That’s an ideal adjustment, and is a big reason why each of the pitches is playing up.

Most relievers don’t have four legitimate offerings like Schmidt, making him a great fit to do what he did when Gerrit Cole had a stinker in Detroit, coming in to cover several innings and stabilize the situation for the Yankees. If Schmidt hadn’t stepped up, the Yankees wouldn’t have won that game. With Michael King blossoming into the multi-inning relief role, Schmidt becomes a perfect candidate for long relief and spot starts. I expect him to stay in that role all year and finally contribute to this team for all of 2022.