This is a pun about DJ LeMahieu’s core

The right-hander’s swing was an injury-riddled mess last year, but he’s back to normal now

Share All sharing options for: This is a pun about DJ LeMahieu’s core

To that end, DJ LeMahieu could be lying with his .300 batting average and he could be lying with his 150 wRC+, but he can’t lie about his swing. We know that hernia and triceps injuries played some kind of a role in his disappointing 2021, and while we don’t quite know when Day 0 of the ailments occurred, I think we can be confident that it was a bigger deal in the second half of the year.

Hernia injuries are particularly problematic because, like oblique problems or back problems, they saw away at your core strength — the, well, core, of any athletic motion. A baseball swing is a chain of movement that incorporates almost your entire body, but the swing itself — bringing your hands from the back of your body to the front — is all core strength. Without that rotation, you’re unable to put any muscle into the ball; indeed, you’re unable to execute a full swing at all.

Let’s look at that second one in detail:

So we can see DJ doing what he often does, making contact, but look carefully at his core, from his groin up to his chest. His legs are fine, his weight transfer isn’t great though remains good enough, but his core is so far behind the rest of his body. His swing is all arms — he doesn’t trust his torso enough, likely because of the hernia problem — so his rotation sucks, and there’s no ooomf on the swing. The result: a harmless ground ball to third.

We can see the impact that this had on DJ’s production by looking at barrel rate, one of the best metrics to use in month-by-month samples. During LeMahieu’s best full season, 2019, he averaged a 7 percent barrel rate, and was extremely consistent month to month. After getting his feet under him in April he stayed between 6-11 percent all season. He has a repeatable swing and good bat control, and while he’ll never have the power of an Aaron Judge, that kind of consistency was a big part of his MVP-caliber campaign.

Contrast that to last year, where he ran a similar 7 percent (well, 6.9 percent) barrel rate in June, and then didn’t come close for the rest of the season. Again, look up at both of those swings, where his core just isn’t engaged in the rest of his swing, so he throws his arms at the ball rather than the arms following the rotation of the rest of his body.

Now let’s look at the early returns this year. The barrel rate for April is 6.5 percent, so not quite as good at his best marks in 2019, but right in line with the average. Why are the barrels back? Lets look at the swings:

I hope that the difference is obvious. LeMahieu’s whole body is in rotation and his arms are following, rather than being asked to provide all the force of a swing. It doesn’t matter how many curls you do — your torso is going to be stronger than your arms; it needs to be involved in the swing. 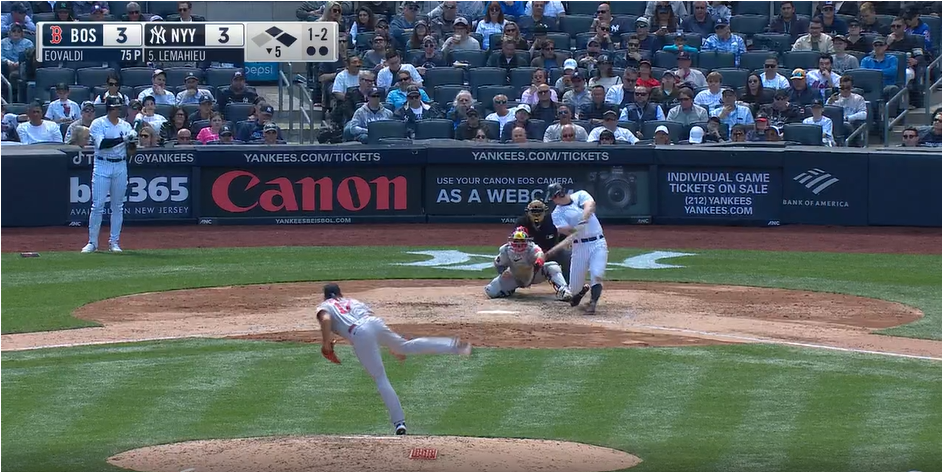 At the point of contact, DJ’s core in 2022 is already in rotation, with his arms just following along. He’s just in a much better spot to do damage on this pitch now that his hernia and triceps problems are gone, and the result is a 100-mph line drive that, were it not for Verdugo, would have been extra bases.

We’re never going to know exactly the moment DJ’s injuries flared up last year, and it’s tough to isolate the effect they had versus normal regression versus just plain old bad luck. What is easy to see is that the surgery worked, and LeMahieu’s swing is cleaner, more connected, more fluid, and more powerful. His core is 100 percent again, and he’s 100 percent a core part of this lineup again.