The crown jewel of the system could be on a fast track to the majors.

Anthony Volpe was drafted with the 30th overall pick in the 2019 draft, and was really best known for being Jack Leiter’s high school teammate. While Leiter went on to dominate at Vanderbilt, Volpe signed for a $2.740 million bonus — a player regarded as interesting but perhaps a bit of a stretch to go in the first round.

After a perfectly serviceable 2019 in rookie ball, Volpe rebuilt his swing on the fly, and turned out one of the best A-ball seasons we’ve seen in some time, rocketing up the prospect rankings and potentially finding himself on track to be the game’s No. 1 overall MiLBer by next year.

Baseball is a game of adjustments. You hit fastballs well, pitchers start throwing you changeups, and you have to learn to lay off them or wait for a hanger. Anyone that gets drafted by an MLB team is one of, if not the best player in the history of their high school, and yet the biggest difference between guys getting drafted and guys making the majors is the ability to make effective adjustments.

In a lost pandemic season and the early days of the 2021 season, Volpe took daily instruction from a private coach, as well as integrating feedback from the resurgent Yankee development team. The result was an entirely new swing, one designed to engineer loft on the ball without sacrificing contact — the exact kind of swing that we see from JD Martinez or Vlad Guerrero Jr., the kind of swing that leads to players batting .300 while slugging .600.

Let’s take a look at his load and weight transfer, the building blocks of a great swing: 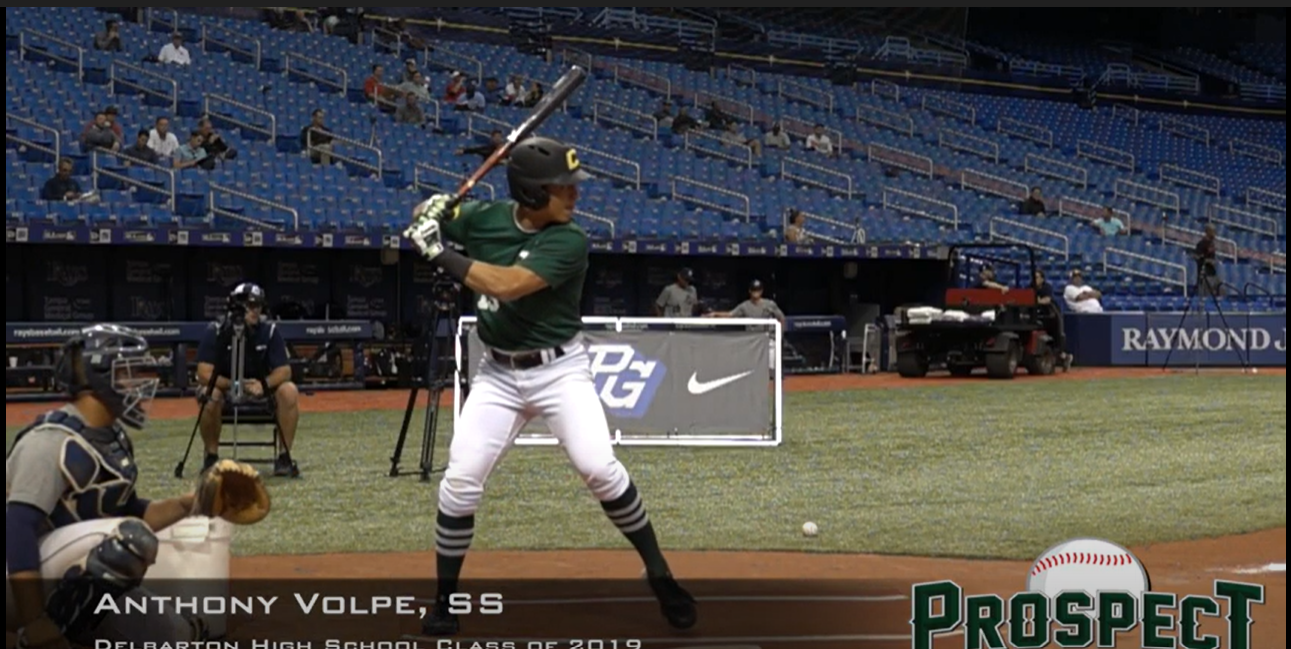 He drops his hands, a good sign, but he doesn’t really load up his back leg, which leaves less potential energy to transfer to his front foot — look at where he is as his bat comes around to meet the ball, his weight is almost entirely balanced. In other words, his swing is mostly arms.

This isn’t necessarily uncommon for high school prospects. Guys with quick enough hands can produce enough bat speed to get by when they’re facing high school arms, especially, and no disrespect to Volpe, playing in the Northeast where the relative level of competition is lower than in the California, Texas or Florida prep systems. Volpe had the natural talent to make contact, and good contact, but affiliated ball is just a different world than high school.

So lets look at the changes he made:

Again, let’s freeze on the load and the weight transfer: 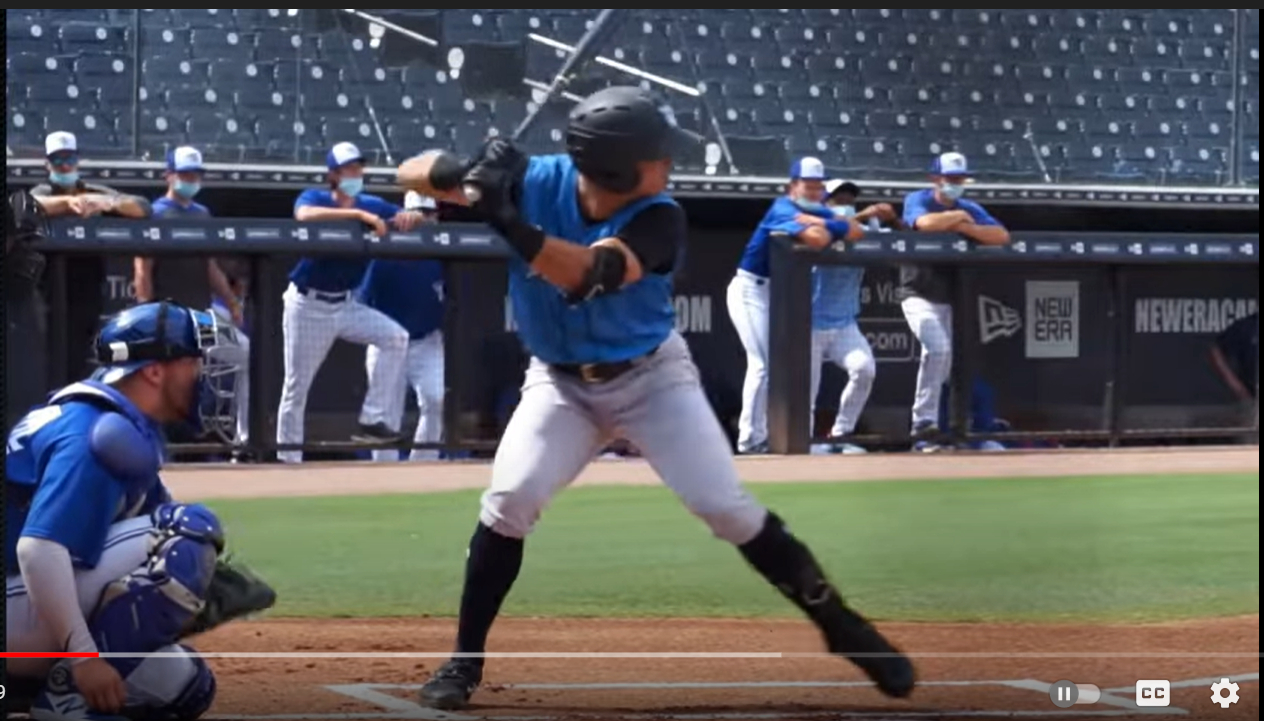 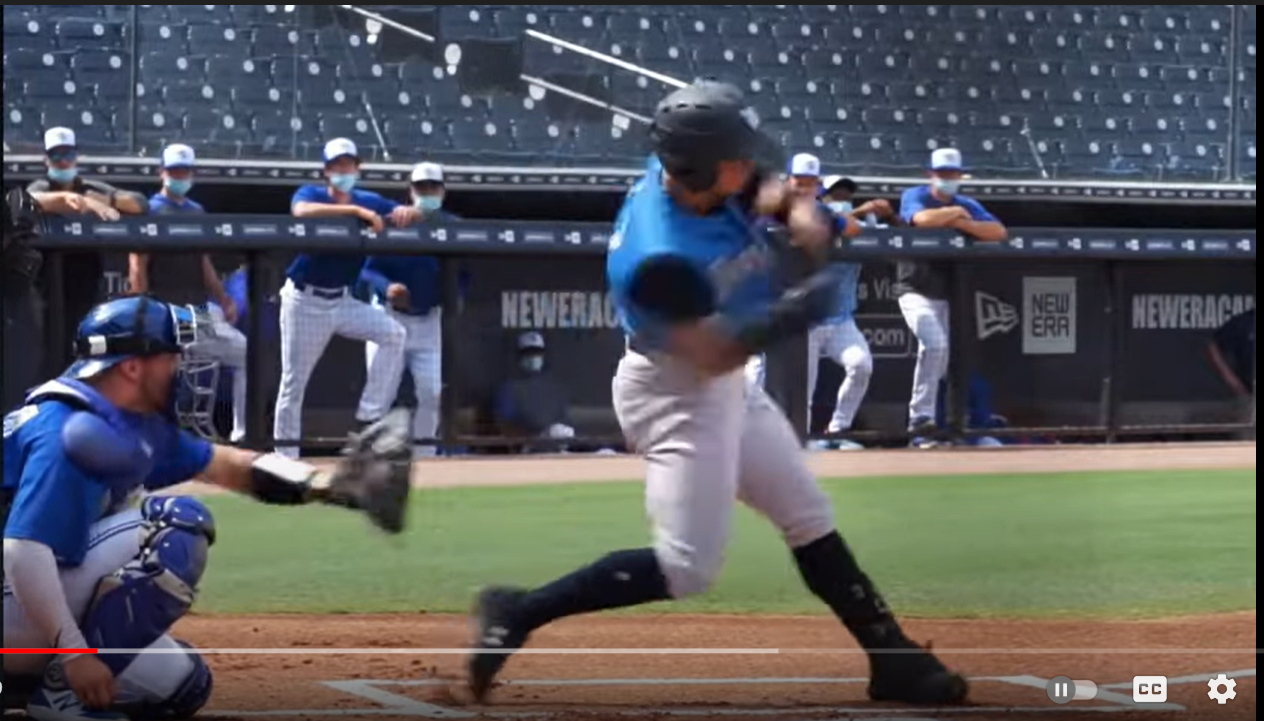 It is, really, a completely different swing. Volpe’s not the biggest guy on the field, currently listed at 180 pounds, but every single ounce of it is loaded on that back foot. His stride toward the mound is much larger, and as his hands come through the zone, all of those 180 pounds moves to his front foot.

Your legs are always going to be stronger than your arms, and what Volpe — and other great hitters — has been able to do is build his swing such that all his arms need to do is follow along. As his weight transfers and his hips open up, his always-quick hands move through the zone like a whip, keeping the bat in the zone on an upward plane a long time, increasing his contact ability while that strong lower half provides his power.

This really is not dissimilar from what JD Martinez did after being cast off by the Astros. Martinez, though, was 27, had a few seasons of major league experience under his belt, and knew that he had to make a change in order to stay in the bigs. For Volpe to be able to understand and effect such a significant change in his swing before turning 20 should be great news to Yankee fans — baseball is about adjustments and clearly this kid is capable of making them.

That’s not to say he’s a perfect prospect. He probably doesn’t stick at shortstop longterm, with scouts and analysts critiquing his arm as a little weak for the position. That the Yankees have a talented defender at short who is also a Top 50 prospect mitigates that positional risk a little, but you still have a player who will probably move off of the game’s most valuable position.

About a month ago Mike Axisa made the comp to Dustin Pedroia, who at his peak was a six to seven win player pairing good contact with a surprising amount of power. I think we need to be careful making comps to perennial All-Stars and MVP candidates — for example, a friend I have in player dev for an AL East team remarked that Volpe is like Mike Trout in the sense that playing in the Northeast hid his talent from a lot of other clubs. That’s the only way to compare the two players, for what it’s worth.

Still, if Volpe has another 1.000 OPS season, it’ll be hard not to make comparisons like that. He’s going to make the jump to Double-A this year, the hardest advancement in baseball. His strikeout rate did climb when he was promoted to Hudson Valley, so we might get a real close look at how well his rebuilt swing can really balance power and contact.

Anthony Volpe’s had about as meteoric rise as you’ll ever see in a prospect. His hit tool and ability to reach base should have Yankee fans dreaming of a top-of-the-order hitter with good power. But, as always, there’s still a long way to go before we’re buying Volpe jerseys — he certainly won’t be wearing No. 5 — and a lot can happen on that journey. One thing we know is that the kid’s made a real adjustment that’s drastically changed his major league potential already, and if he makes one or two more, it won’t be long before he’s in the Bronx.