The young righty has seen his stock fall in recent year, but maybe Matt Blake can help unlock the potential he flashed as a rookie.

All the talk entering the offseason revolved around the star-studded class of free agent shortstops hitting the market at the same time. However, this winter featured a similarly strong group of starting pitchers, headlined by Max Scherzer followed by Robbie Ray, Kevin Gausman, and Marcus Stroman.

Despite this abundance of impact players and the clear need at short and in the rotation, the Yankees sat out while the big names flew off the board. And while it looks like the Bombers will opt for a stopgap to address the shortstop vacancy, there has been zero word as to how they will address the starting staff.

Carlos Rodón and Clayton Kershaw are the best remaining free agents, each with significant injury question marks. We’ve profiled the trio of arbitration-eligible Oakland starters — Sean Manaea, Chris Bassitt, and Frankie Montas — but it’s still unclear if the Athletics will go ahead with a full teardown. Today I’d like to pivot to a less talked about trade target, one who may require a more affordable prospect cost while still possessing intriguing upside: Chris Paddack.

Paddack put the league on notice with his sparkling debut campaign in 2019. Drafted by the Marlins in the eighth round of the 2015 MLB Draft, the Padres acquired the righty in 2016 in a trade that sent Fernando Rodney to Miami. Paddack pitched to a 3.33 ERA with 153 strikeouts in 140.2 innings his rookie year. Among starters with at least 140 innings pitched, Paddack finished fifth in WHIP (0.980) and fourteenth in K-BB% (21.5 percent), ending the season with 2.4 fWAR. It appeared the Padres had an ace for years to come.

That is, until 2020 struck. Paddack struggled to the tune of a 4.73 ERA in 59 innings, giving up the second-most home runs (14) of any starting pitcher. Those difficulties carried over to 2021, as he finished the season with a 5.07 ERA. Granted, he may have been the victim of some bad luck — he ran a FIP and xFIP in the high-threes and an unsustainably-low 60.7 percent strand rate — but it’s clear the shine had come off this once-promising prospect.

Things got bad enough that, despite being under team control through 2024, the Padres appeared ready to move on from the young righty last season. Dennis Lin of The Athletic reported that San Diego offered Chris Paddack in trade negotiations for Max Scherzer before his deadline move along with Trea Turner to the Dodgers. Last week, Steve Adams of MLB Trade Rumors speculated that the abundance of arms in the Padres’ rotation creates a logjam that could make Paddack more expendable. However, given the injury crisis that struck their starting staff last season, it’s conceivable they may rather hang onto him as depth.

The other concern with Paddack is health. He underwent Tommy John surgery in 2016 and missed time in 2021 with a sprained UCL in the same elbow. His situation actually reminds me of Jameson Taillon. Under the eye of Yankees pitching coach Matt Blake, Taillon flashed some of the brilliance of the 2018 campaign prior to his second Tommy John surgery, and I wonder if Blake could work the same wonders on Paddack.

Paddack throws a four-seamer, changeup, and curveball. At almost 95 mph, his fastball placed in the top quartile in the league. He worked to refine his curveball in 2021, and the pitch featured the fourteenth-most vertical movement of any curveball in the league. The changeup was Paddack’s most effective weapon in 2019 and 2020, and given the success Blake has had with refining the changeup across the Yankees pitching staff, I’d love to see if he could do the same with Paddack. One thing that’s for certain is that Paddack has never struggled with the free pass, sitting in the 95th percentile in walk rate in 2021, though the rest of his Statcast metrics aren’t as rosy.

I’d like to return to the fastball for a moment. As good as his secondary offering may be, Paddack’s effectiveness begins with the four-seamer. In 2019, he sat in the 90th percentile in vertical movement with the pitch, placing him among the league’s elite when it comes to achieving that desired rise. That vertical movement was much diminished in 2021 and the pitch correspondingly suffered.

So what caused him to lose rise on the four-seamer? Many factors contribute to a pitch’s movement, but the three main ones I look at are spin rate, spin axis, and spin efficiency. The spin rate and spin efficiency on Paddack’s four-seamer have remained consistent for the most part, but the spin axis has shifted slightly. For a pure backspinning four-seamer, a 180 degree spin axis is ideal, and Paddack’s four-seamer worsened from 204 degrees in 2019 to 211 degrees in 2021. He lost roughly a half-inch of rise on the pitch and gained horizontal tailing action, which one would expect from a more “tilted” spin axis.

Here we have a four-seamer from 2019. You can see how the fastball stays on plane all the way to the plate, causing Austin to whiff underneath it.

Here’s the pitch, again thrown middle-up, in 2021. Relative to the previous clip, you can see how the fastball lacks the same riding action at the top of the zone, almost dropping onto the barrel of Betts’ bat.

I froze the video at release to see if a change in arm slot was potentially the culprit for the shift in spin axis. To the naked eye, the release points from 2019 and 2021 look pretty similar, so perhaps another factor — like finger orientation — is in play. 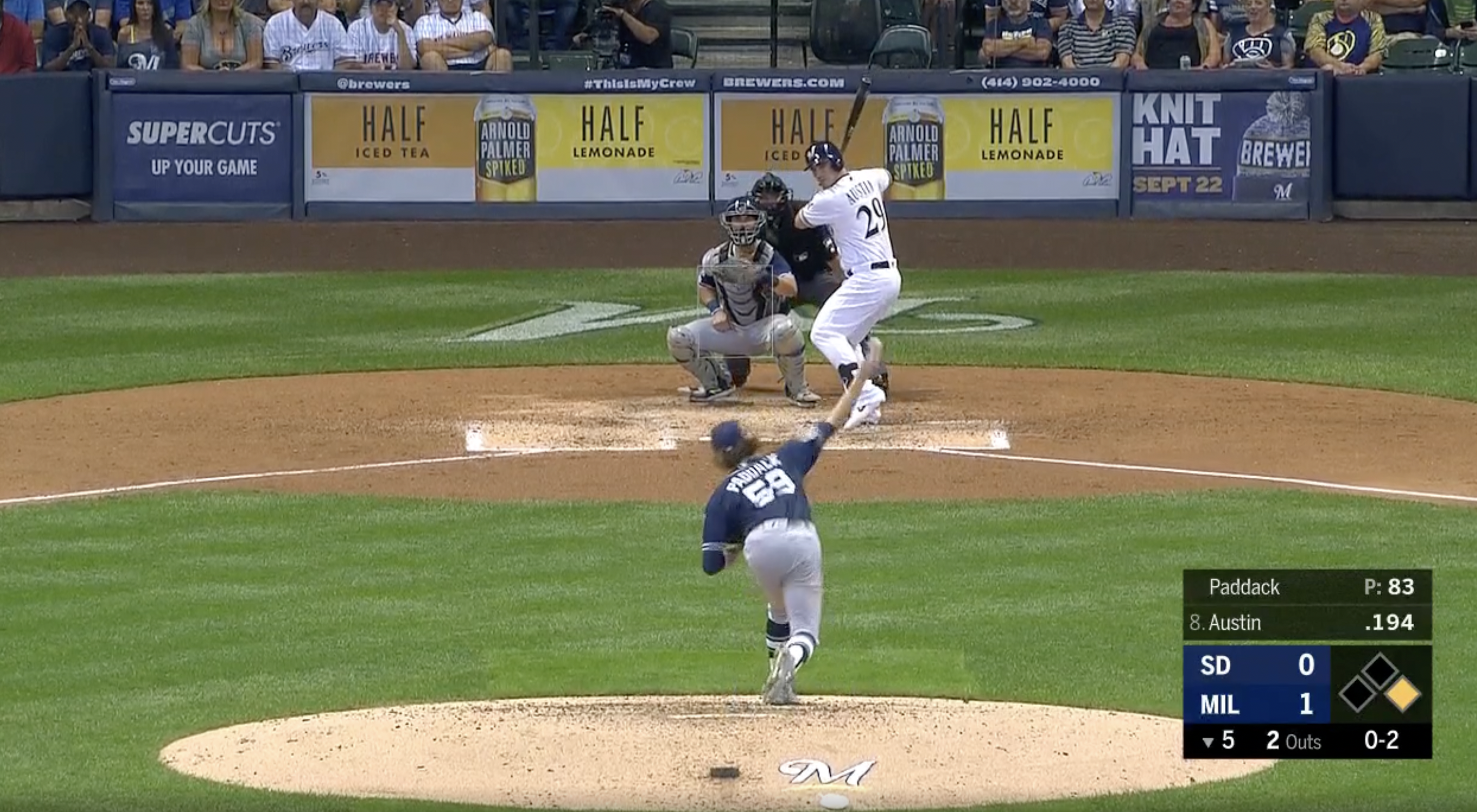 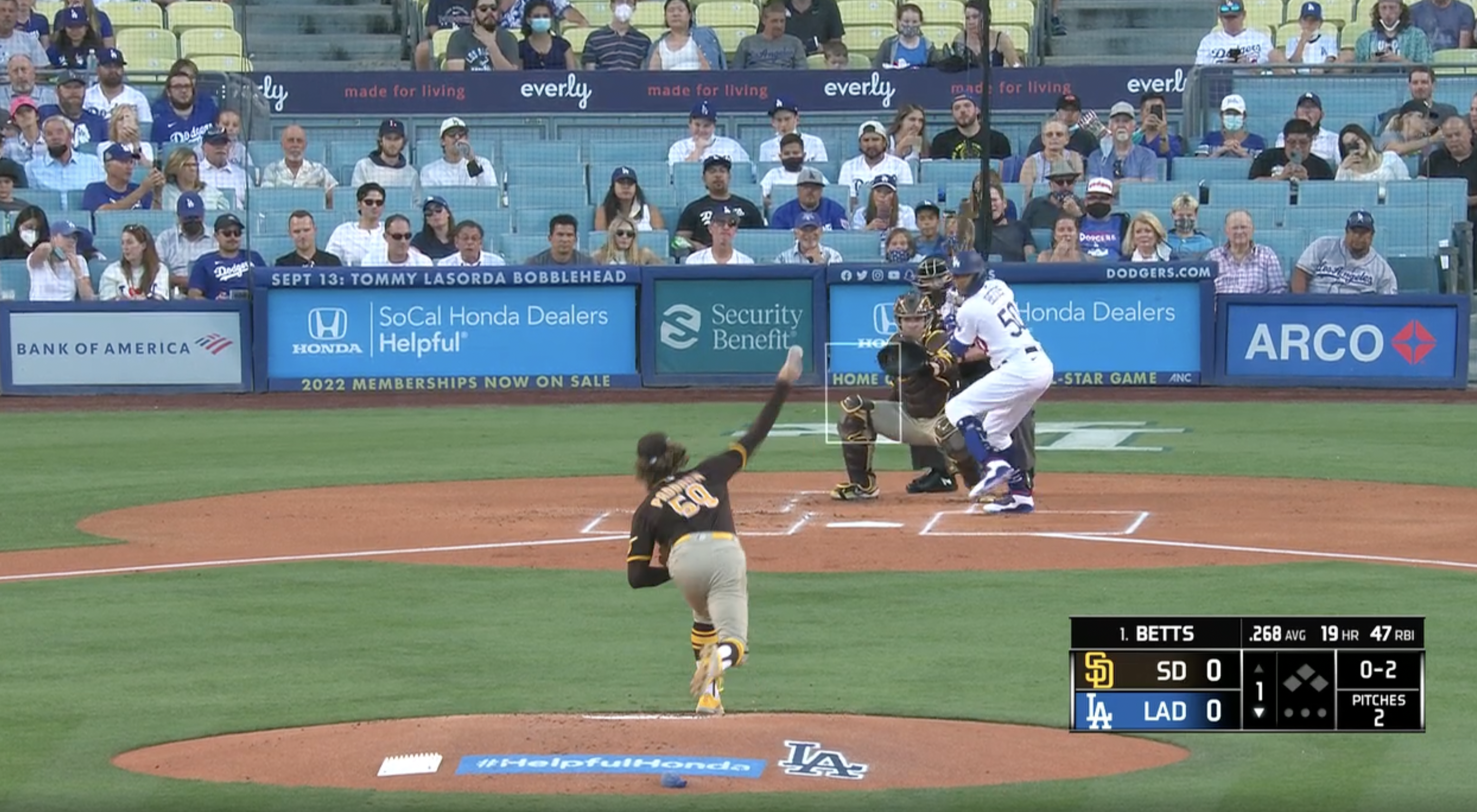 If Blake can help Paddack get back to the pitch dynamics he achieved in 2019, I wouldn’t be surprised to see the four-seamer dominating hitters once more.

A trade takes two to tango, and the Yankees ostensibly have something to offer that not many other suitors do: payroll space. By that I mean, the Yankees are the wealthiest team in baseball and therefore have the obvious ability to absorb a bad contract as part of a trade deal (granted, Hal Steinbrenner’s recent behavior throws this into serious doubt, but in theory it’s possible).

It’s no secret that the Padres would love to get Eric Hosmer’s and Wil Myers’ salaries off the books, and attaching either player to Paddack would significantly reduce the prospect cost needed in return from the Yankees — a win-win situation. Myers is owed $22.5 million next season while Hosmer has four years and $60 million remaining on his deal. How much either player could help the Yankees is in question — Hosmer was a replacement-level first baseman last season while Myers hasn’t played center field since 2019, but if either is the cost of acquiring Paddack, it might be worth exploring.

Given his declining performance across the last two seasons in addition to the injury concerns, Chris Paddack should probably be viewed as nothing more than a high-upside project rather than a sure option to pencil into the rotation. However, if he is fully healthy and if the Yankees pitching coaches can work their magic, the 26-year-old righty could be one of the steals of the trade market.