He made positive strides during the regular season but looked overmatched in the playoffs.

When the Yankees drafted Clarke Schmidt out of the University of South Carolina with the 16th overall pick in the 2017 MLB Draft, it was a selection that showed an enormous amount of faith in the youngster. He had just undergone Tommy John surgery, but his elite breaking ball spin rates — even by MLB standards — and four-pitch arsenal hinted at a future as a top of the line starter. That outcome has yet to materialize, however he managed to carve out a valuable role for himself in 2022 as a multi-inning reliever coming out of the Yankees’ bullpen.

Let’s start with the good. 2022 was by far the most innings Schmidt has pitched in the bigs. It also marked a significant step in his development, as he was able to slash his walk and home run rates in half while keeping the strikeouts intact. His RPMs also remained elite, with his fastball and curveball both placing in the 93rd percentile in spin rate league-wide. He and the Yankees may still have their sights set on stretching him out as a starter, but at the very least he’s proven he can handle a long-man relief role.

It’s also true that Schmidt still has a long way to go when it comes to consistency. He found himself in the bottom-third of the league in average exit velocity, barrel rate, walk rate, and chase rate. This is a rather dangerous combination. Because he cannot entice hitters to chase his pitches out of the zone, he either issues a walk or is forced to come into the zone, where he gets hammered.

I think part of this is due to a curious alteration he made to his pitch mix. Whereas in 2021 he relied on an even distribution of four-seamer, sinker, slider, and curveball, in 2022 he cut back on his usage of the curveball and four-seamer to make the slider his primary offering. It’s a bit of a head-scratching decision in my eyes considering he only learned the slider last year, and his rawness commanding the pitch was evident.

The first pitch is a clear case of missed location that we saw far too often with the slider. Trevino calls for it down-and-away and it ends up middle-up. The second isn’t as egregious, but it’s still a missed location. Schmidt threw three sliders to open the plate appearance, so González is probably hunting the pitch. That being the case and with a 1-2 count, that pitch has to be much farther off the plate than dotting the low-and-away corner where the hitter could still get the bat to it.

For reference, here is a comparison of the heat map of Schmidt’s slider (left) vs. Gerrit Cole’s slider (right): 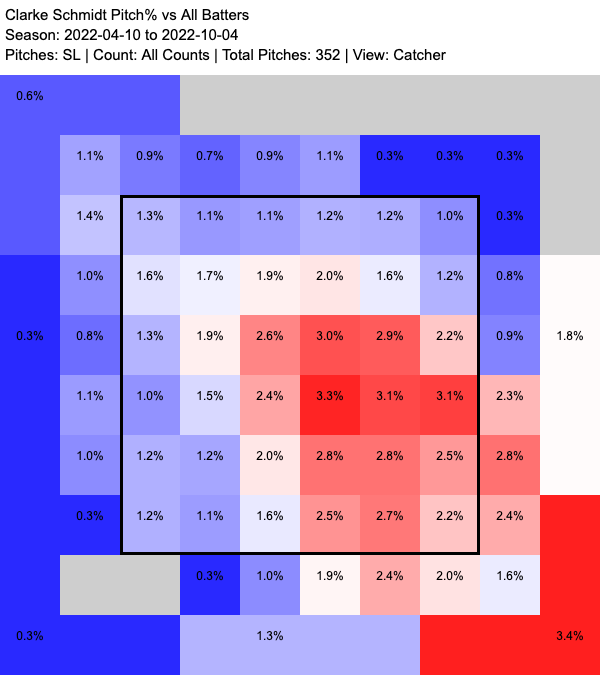 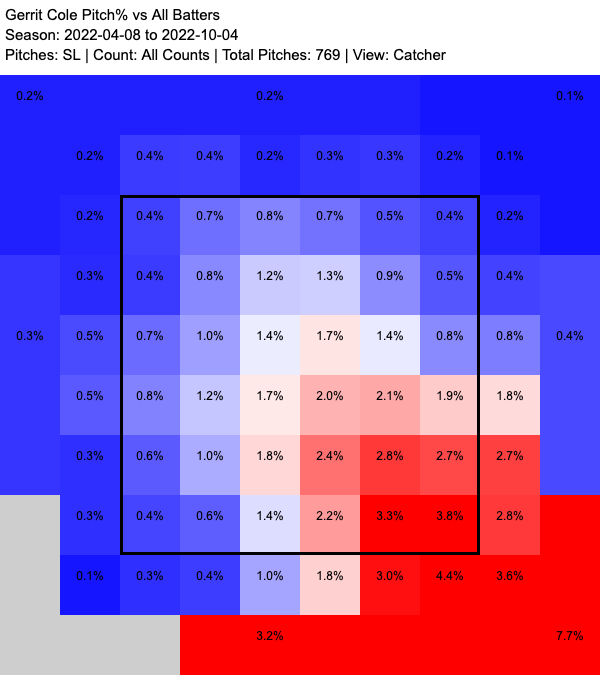 By no means am I suggesting that Schmidt has to command his slider at Cole’s level to be effective. However, it does illustrate how much farther the pitch has to come. His command of the slider is nowhere near good enough to be throwing it as frequently as he does — he threw it in the zone the most of any Yankees pitcher with at least 100 sliders thrown at 52 percent.

I can understand why he throws the slider so much — both his sinker and four-seamer are mediocre offerings over which he possesses the same tenuous command. I suppose the rationale is that a hitter can do more damage on a poorly-located fastball than a poorly-located slider — the league slugged a .393 xwOBA against fastballs down the middle vs. a .366 xwOBA against sliders down the middle in 2022. However, his inconsistencies with the pitch both in terms of shape and location tell me that he’d be better served refining the fastball to make it and not the slider his primary pitch.

I’m almost certain that our staff would’ve awarded Schmidt a higher grade than B- were it not for his multiple blow-up outings in the playoffs. These weren’t entirely his fault — he was pressed into higher leverage duty with guys like Ron Marinaccio and Scott Effross getting injured right before the postseason in addition to head-scratching bullpen management by Aaron Boone — but he still bears the brunt of the blame thanks to failed execution.

He gave up three straight singles to hand the Guardians the walk-off victory in Game 3 of the ALDS, and then served up a pair of runs to the Astros in Game 1 of the ALCS to put the Yankees in a hole from which they would not recover. Perhaps he can use those moments of adversity as opportunities for growth — the Yankees will be relying on him to fill an even larger role next season now that a handful of their impact relievers from the last half-decade are no longer with the team.