What if Matt Chapman was a shortstop?

The league’s best glove has already shown an ability to own the left side of the infield.

Share All sharing options for: What if Matt Chapman was a shortstop?

When I first heard the rumor that the Yankees had kicked around the idea of “Matt Chapman, MLB Shortstop,” I was inclined to react the way a lot of fans reacted: this is dumb, get a real shortstop, etc. etc. But we spend a lot of time openly questioning if the Yankees are as innovative as the other leading organizations in baseball, especially on the position player side. How come the Rays or the Dodgers seem to be able to do things with their roster that the Yankees can’t?

So I think it’s worthwhile to actually investigate whether Matt could work as a major league shortstop. I’m reasonably confident that his bat can rebound, if not to 2018 levels, certainly to beat the 107 wRC+ Steamer has him projected for in 2022. That immediately makes him a better offensive option than any of the proposed “stopgaps” like Andrelton Simmons, and I think gives him much more upside than the idea of Gio Urshela at short. The value of Chapman then really comes down to the defense.

Chapman is arguably the best defensive player in the American League, at third base. Transitions between positions are definitely possible, but it’s important to remember that third is a read-and-react kind of spot; it’s called the hot corner for a reason. Shortstop involves more range, covering bags on double plays, in general more fine movement than Glove Line Drive, Throw To First.

But a funny thing starts to happen when you break down his fielding. Oakland has deployed him pretty aggressively — he is technically a third baseman, but shades pretty much anywhere between the two bags. When you combine that aggression with the fact that he probably has the best range of any infielder in baseball, you begin to see how he makes plays pretty much anywhere on the left side of the diamond: 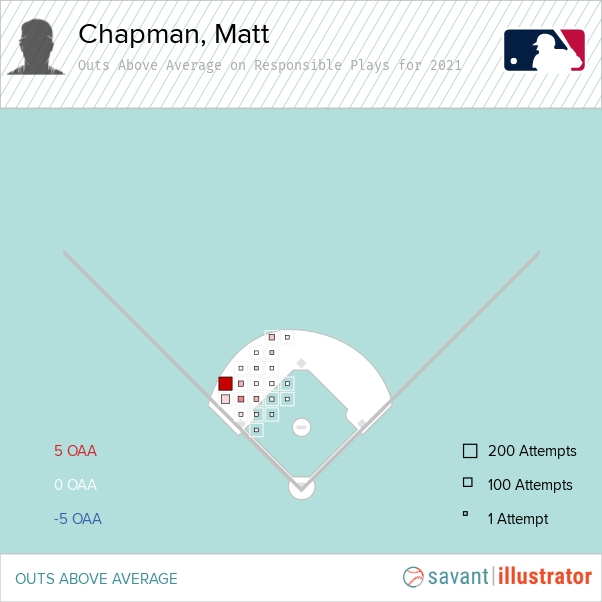 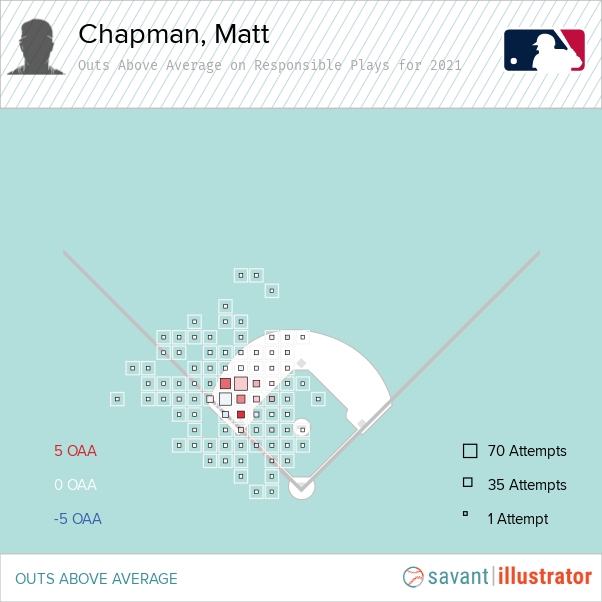 Chapman starts most plays — and indeed is most effective — at the traditional third base position. However, he’s able to convert balls to outs all over the place, often travelling 50, 60 feet off the starting position to make the play. This ability makes me think that if he lines up at short, that range is going to play, and indeed, when Chapman is lining up in the “shortstop” part of the field over the past three years, he hovers between 0-2 OAA in limited time.

Full-time shortstops will get around 500 attempts on balls in play a season, and Chapman only had a fifth of those in 2021, posting a 1 OAA. It’s tempting to just prorate that performance over 500 attempts, but I think there’s a bit of a discount rate, given that he’d have to adjust to the footwork around the bag, and other slight differences between short and third. So while I’m not comfortable saying he’s a 5+ OAA shortstop, I think that he sure could be worth 3-4 in a full season.

Now, 3-4 OAA isn’t something to ring from the heavens...but it’s worlds better than Gleyber Torres, Corey Seager, and Freddy Galvis, and although Trevor Story has historically been a better defensive shortstop, his decline in 2021 would slot him below a hypothetical season from Chapman as well. So we have the once-incumbent Yankee shortstop, the high price free agent, the medium price free agent, and one of the best examples of potential “stopgaps” for 2022 all ranking below a guy who doesn’t even play the position on a regular basis!

It’s easy to write off the idea of Chapman as a shortstop as just another Yankee out of position, but Oakland has already leveraged him at the shortstop position, both in the lineup and during in-game shifts. His incredible range should make us feel confident that he can handle the spot better than anyone currently on the Yankee roster, and the upside in his bat makes him a better fit than the Simmons or Galvis of the world.

I still prefer Correa to Chapman, because we know how good Correa is at short, and we’re projecting how good we think Chapman is there. After that, it gets more difficult. I’m tempted to prefer Story to Chapman, because while Story’s defense has declined, we know he’s comfortable at short, and we are once again projecting that Chapman would be too. However, Chapman was better at short in 2021, and has reached higher peaks offensively. Prospect cost would be a challenge in a Matt Chapman deal, but then so would fitting Story’s contract, given the Yankees’ self-imposed financial constraints.

Anyone else who the Yankees might consider, I think, are lesser options. Simmons, Galvis, Isiah Kiner-Falefa ... these kinds of players can’t touch the offensive projection of Chapman (and Galvis is NPB-bound anyway). Gio Urshela, the potential in-house replacement, is a worse fielder and likely worse hitter. Chapman works out, in my view, better than any of those guys and can easily slide over to third base, his natural position, should Anthony Volpe or Oswald Peraza be MLB ready before the end of 2023.