Joey Gallo and the anatomy of a slump

The towering lefty has yet to perform as advertised.

Share All sharing options for: Joey Gallo and the anatomy of a slump

Don’t get me wrong, the Yankees knew what they were signing up for when they traded for Gallo: a prototypical three true outcome hitter. Yes, he strikes out in bunches, but you take that because he also walks and hits home runs at a prodigious clip. The problem is, since moving to New York, the power has dried up to the extent that he has almost become a two outcome player — he strikes out or walks in 57 percent of plate appearances as a Yankee!

Just looking at the top line stats paints an ugly picture of Gallo’s tenure in the Bronx. Entering play yesterday, he was slashing .138/.296/.345 with six home runs and 13 RBI in 33 games for the Yankees. He sports a 80 wRC+ in pinstripes, and while he is walking 18.3 percent of the time, his strikeout rate of 38.7 percent would be a new career high across an entire season.

Granted, Gallo has been the victim of some rather rotten luck over the last month-plus. His .182 BABIP with the Yankees is almost 100 points lower than his career average. His average exit velocity has actually ticked up since the trade, and the 16 point gap between his wOBA and xwOBA is not negligible. Additionally, the fact he has increased his career GIDP total by over 33 percent post-trade feels a bit fluky to me.

So what exactly has gone wrong for Gallo over the last handful of weeks? Manager Aaron Boone has been asked about this numerous times, with many wondering if Gallo is perhaps pressing and trying to force results. Boone offered a slightly modified take, yet essentially confirmed those suspicions:

Aaron Boone on Joey Gallo: "I thought (he was) maybe a little jumpy in his last couple of bats last night, probably wanting to get that result. ... It's really just making sure the focus is on the the quality of the at-bat."

Pretty vague, but there are two different interpretations I’ve drawn. “A little jumpy” to me can mean that Gallo is getting overeager at the plate and is swinging at too many bad pitches, or that his swing mechanics are getting sped up, so that he is not getting off his A-swing when he gets a pitch to hit. Let’s see how much one or either is the case.

If we accept the first interpretation, we would expect to see a rise in his chase rate. That is not that case — per FanGraphs, Gallo’s chase rate has fallen from 23.3 percent to 18.9 percent since joining the Yankees. In fact, he is swinging at fewer pitches in general, with his zone swing rate falling by six points and overall swing rate falling more than four points.

So how about the second interpretation? Is Gallo trying to do too much at the plate? Is he trying to hit the ball out of the stadium rather than execute a controlled yet still powerful swing?

Before we answer any of those questions, we have to understand what made Gallo so effective for much of his Rangers career. Since his first full big league season in 2017, Gallo has been one of the premier fastball hitters in the league. His .430 xwOBA against fastballs over that span is eighth-highest in baseball.

Unfortunately for Gallo and the Yankees, that hasn’t been the case recently. To the eye, it seems like Gallo has not been punishing his bread-and-butter pitch: a fastball in the zone. Indeed, that has been his plight. Since joining the Yankees, Gallo has experienced the 13th-largest drop-off in wOBA against fastballs in the zone in MLB.

But why is he doing so much worse against his favorite pitch to hit? Turns out, he’s either misidentifying the fastball and watching it go by, or when he does identify fastball, he’s unable to make contact. Prior to joining the Yankees, he swung at over two-thirds of fastballs in the zone. Since joining, that number is below 60 percent. Additionally, he has seen his whiff rate against fastballs in the zone skyrocket from the low-30s to over 40 percent. 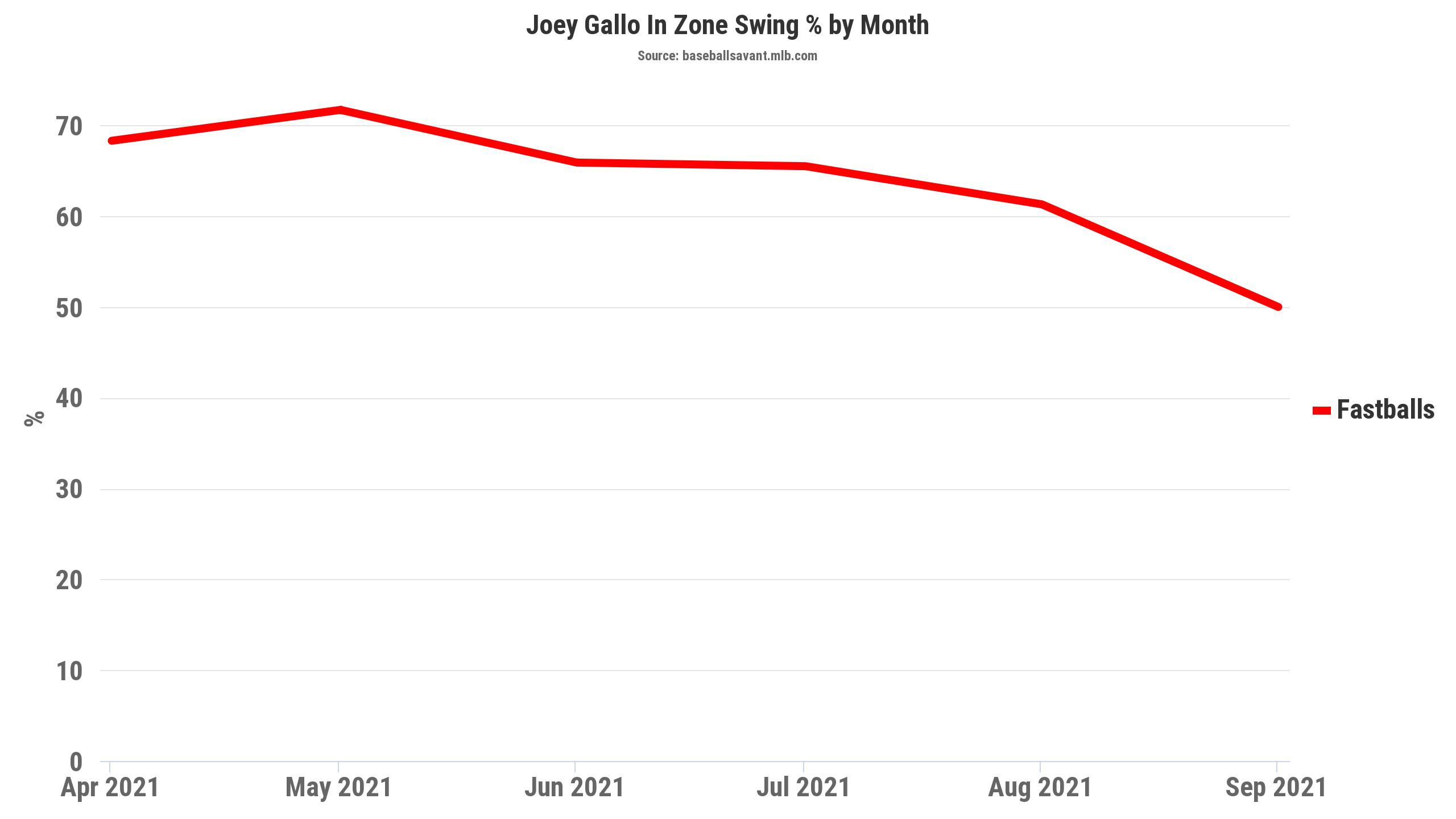 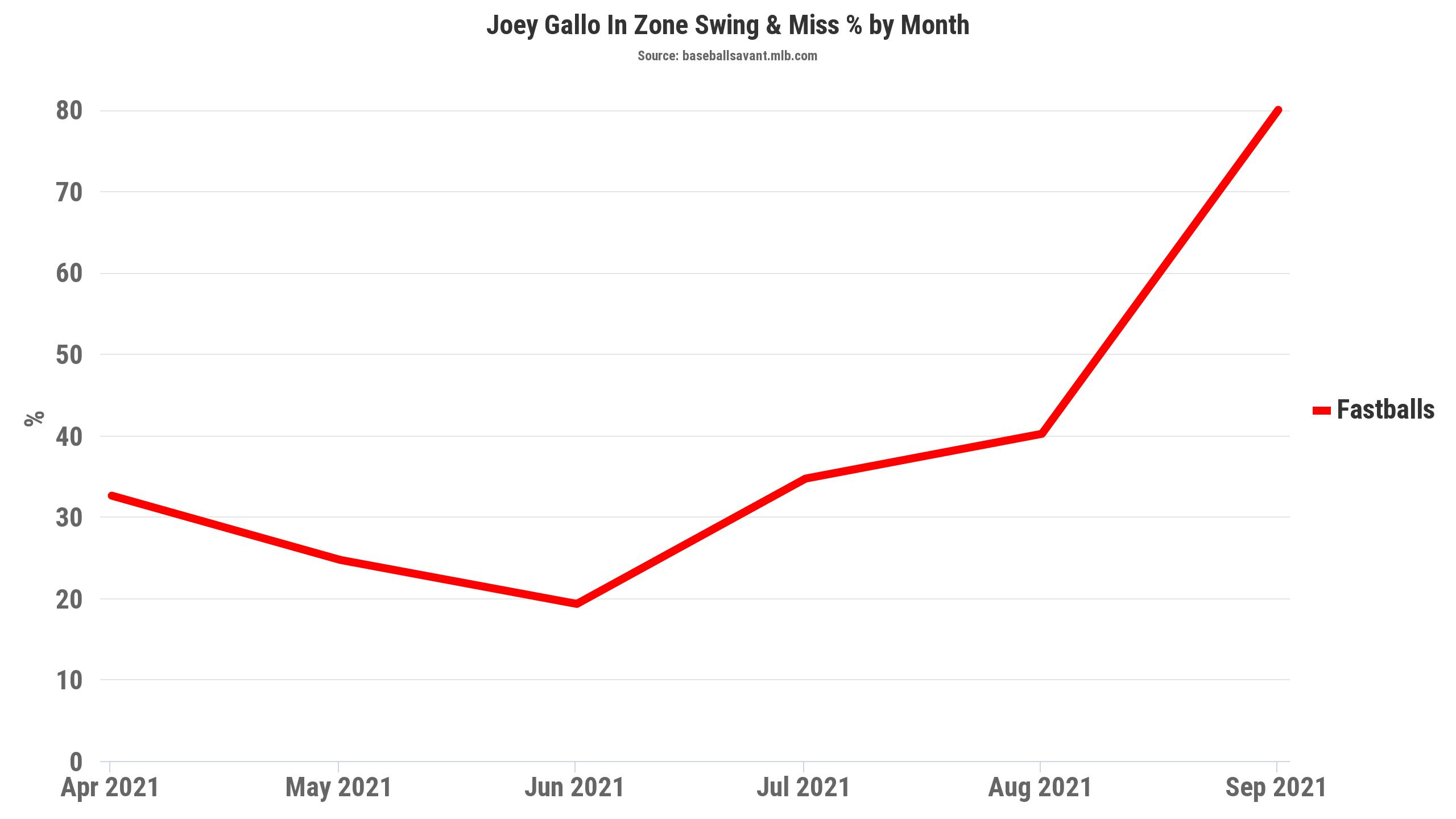 Taken together, these findings would appear to back up Boone’s evaluation. Getting jumpy at the plate can take you out of your proper swing mechanics, making it near-impossible to both identify a pitch and square it up. He’s watching too many hittable pitches go by, and when he does swing, he’s unbalanced to the point that he cannot do damage... sound familiar?

By no means am I trying to say that Gallo has been a bust for the Yankees. His defense is elite as ever. He has come through with game-tying or game-winning home runs on multiple occasions since switching teams. Still, I think we’d all be justified in feeling underwhelmed or even disappointed by the large lefty’s entire body of work in pinstripes.