Corey Kluber and the art of the curveball

Long a closely-guarded weapon, it appears Kluber has shared with his teammates the secret behind the patented Kluberball.

Share All sharing options for: Corey Kluber and the art of the curveball

During his heyday, Corey Kluber was one of the very best pitchers in MLB. Between 2014 and 2018, he accrued the third-most fWAR of any pitcher in baseball, narrowly trailing Max Scherzer and Clayton Kershaw. He won two Cy Young awards and seemed ticketed to the Hall of Fame.

None of that would have been possible without his patented pitch: the Kluberball. Part-curveball and part-slider, the mysterious breaking pitch has bedeviled hitters and pitch classifying models alike. It has more drop than a slider, more swerve than a curveball, and is next to impossible to identify out of the hand.

At the peak of his powers, the Kluberball was the best pitch in baseball. Between 2014 and 2018, FanGraphs calculated its value at 120.2 runs above average, more than double the next-best curveball and more than any other single pitch in the big leagues. It was so uniquely effective that it verged on intellectual property. As such, the Kluberball had been one of the most closely guarded secrets in the pitching universe. That is, until he joined the Yankees.

It goes without saying that Kluber is a few years and a handful of injuries removed from his halcyon days, but it is clear he still has plenty left in the tank (just ask the Texas Rangers). The Yankees took a flyer on the veteran in the offseason hoping to tap into any magic left in reserve. But along with Kluber the pitcher, they also brought in Kluber the teacher and mentor.

Kluber’s first student? Michael King. Speaking before the start of the season, King talked about wanting to develop the shape on his breaking ball. He worked during the offseason with Yankees pitching director Sam Briend, but was especially looking forward to the opportunity to pick Kluber’s brain and learn his secrets. Well, it looks like that’s exactly what he’s been doing.

Fast forward to the end of July, and King again spoke about his pitch development, this time on FanGraphs’ Learning and Developing a Pitch series. (For those who are unfamiliar, FanGraphs interviews pitchers to highlight the process that goes into pitch design and implementation. I highly recommend giving the series a look, it’s some of the best baseball content anywhere!)

King identified his slider as an area for improvement, illuminated the process of choosing a grip, and broke down the mechanics of learning his newly-designed pitch. And lo and behold, said pitch was modeled directly off the Kluberball:

“In 2019, I got hurt, and then it was the whole process of trying to change the movement profile. I wanted it to be more horizontal, more sweepy, like [Corey] Kluber’s, rather than the slider I had, which just had a little bit of depth. This year I’m finally figuring it out. Having Kluber on my team, I could talk to him about his grip, what his mentality is, what he’s trying to do at release. A big thing for me was, because I wanted to get that sweep and horizontal, I would get really rotational with my body to try to pull it sideways. [Kluber] said that’s the opposite of what you want to do. He said to just let the grip do the work ... Now it’s like the Kluberball. It has the horizontal movement of a curveball, but the vertical movement of a slider. Kluber doesn’t even know what to call his — he just calls it a breaking ball — and that’s kind of the road I’m going down now. But I do call it a slider.”

We can even see the evolution of his pitch in real time. Before he got injured at the beginning of July, King’s main breaking ball was classified by Baseball Savant as a slider, and exhibited many of the characteristics — tight break without much depth — that he was looking to modify.

Since returning from the IL, the slider has completely disappeared, replaced by, wouldn’t you know it, a curveball that bears eerie resemblance to the Kluberball.

Both pitches exhibit that telltale sweeping horizontal movement. In fact, King’s curveball has the sixth-most horizontal break as a function of velocity of any curveball in MLB — six spots ahead of Kluber. Esteban will have more tomorrow on how effective King can be pairing this pitch with his divergently-moving sinker, but for now it’s safe to say that this newly-designed breaking ball is pretty similar to the one Kluber throws.

But wait, Kluber wasn’t finished there. It appears he has zeroed in on his next victi- ... er, student: Chad Green. Anyone who has watched Green pitch this season would agree that the curveball has been his Achilles heel. He has very little feel for the pitch, throwing too many cement mixers that get blasted, often times for a home run.

Prior to the start of last season, Green ditched his mediocre slider for an up-and-down curveball, to some initial success. The idea was that to maintain the effectiveness of his high-spin, rising four-seamer, he needed to pair it with a curveball with vertical tilt to maximize the tunneling effect at the top of the zone.

Recently however, it seems Green is sporting a new variation on the pitch, one that also mirrors the characteristics of the Kluberball.

Once again, we see the sweeping action. Instead of dropping off the table, Green’s curveball now gets a healthy amount of lateral swerve. And for the skeptics out there, the data backs up the eye test. 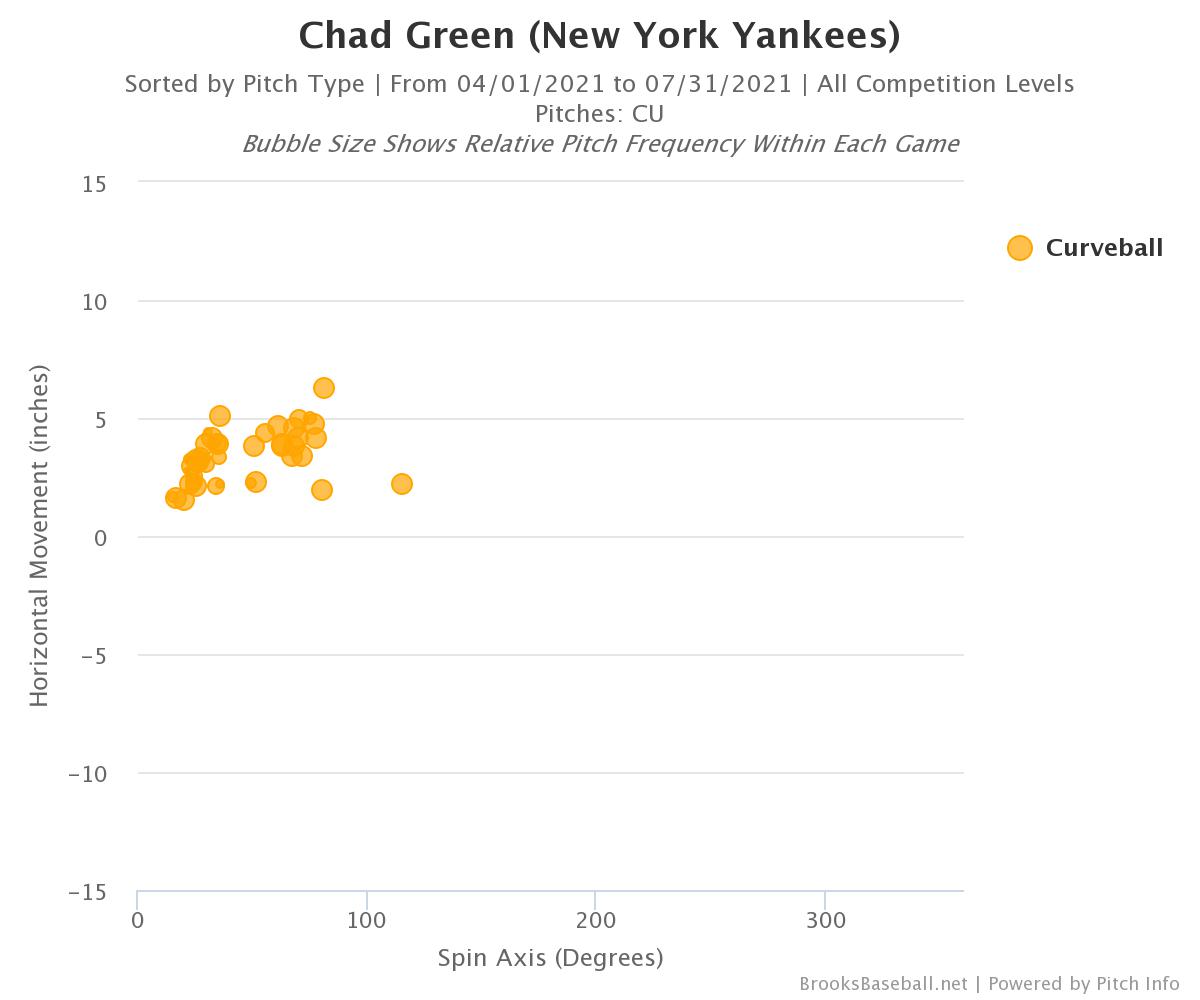 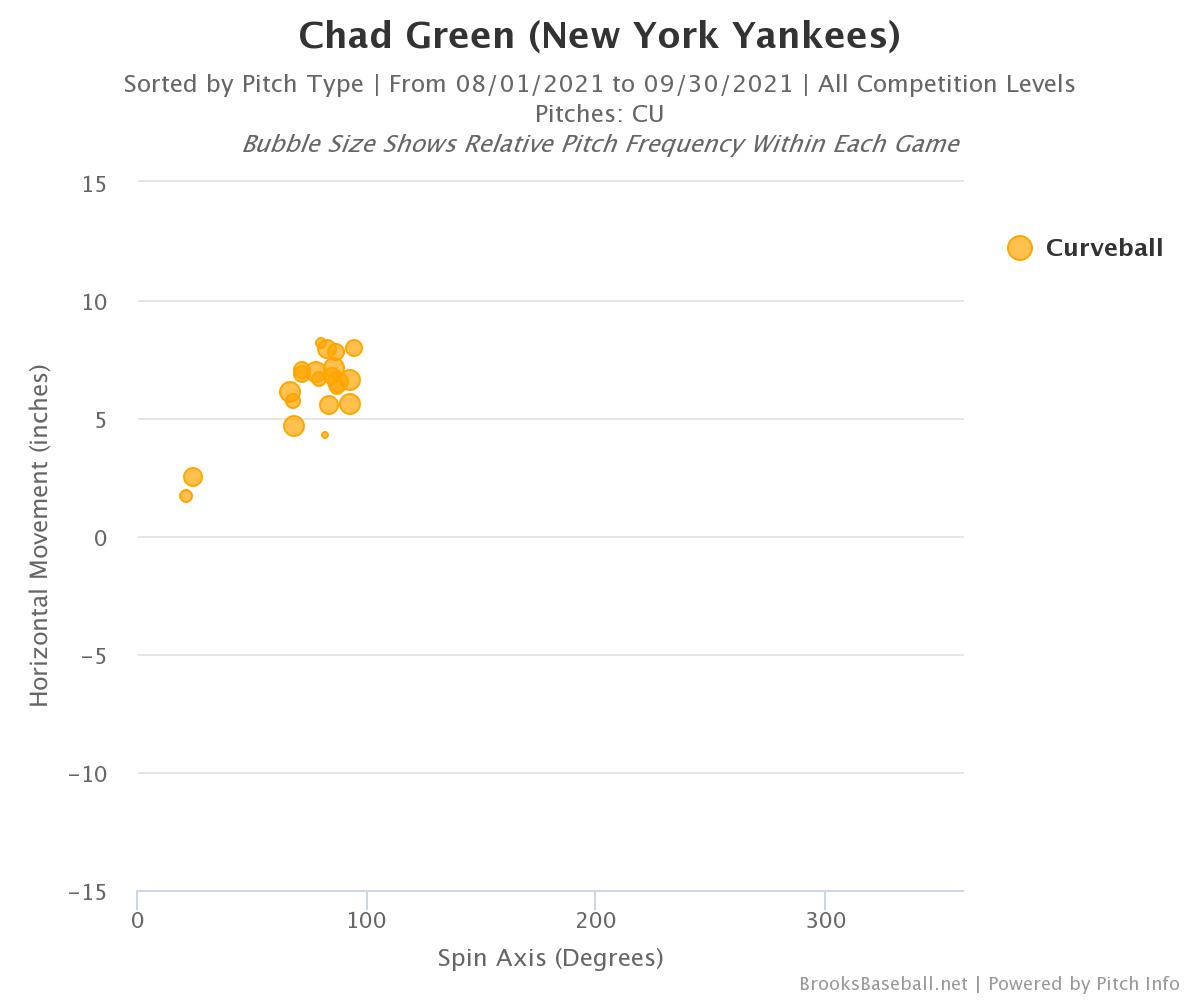 Spin axis is one of the major components of a pitch’s break. For reference, a ball with perfect topspin (from the pitcher’s perpective) has a zero degree spin axis. To achieve his prior vertical tumbling action, Green threw his curveball with as much topspin as possible, and thus needed to get his fingers to the front of the baseball. With the new sweeping movement, Green is instead trying to throw the curve with a mix of topspin and side spin, getting his hand more around the baseball. The increase in spin axis starting around the beginning of August perfectly coincides with the spike in horizontal movement on his curveball.

Don’t get me wrong, the curve is still a major work in progress for Green. He is still liable to throw a hanger down Broadway. What I will say is that the new shape on the curveball gives him a lot more margin for error. Whereas before, a cement mixer meant a curveball that hung right over the heart of the plate, the laterally-moving variety is at least tailing away from righties or jamming lefties.

Corey Kluber’s first year in pinstripes has not yielded the ideal results. He missed a significant chunk due to injury, and exhibited rust in a few starts following his return most recently and at the beginning of the season after an almost two-year layoff. That said, he may have already provided value far in excess of anything the Yankees could have imagined. He has mentored the next generation of Yankees pitchers, which could pay off exponentially in the future.