Luis Severino finally made his return, but will his high velocity follow?

The former Yankees ace needs to get his legs back under him.

Share All sharing options for: Luis Severino finally made his return, but will his high velocity follow?

In 2017 and 2018 combined, Luis Severino accumulated 11 fWAR. It is not at all an exaggeration to say that he was a legitimate ace during that stretch at the young ages of 24 and 25. In comparison, Gerrit Cole has 5.3 fWAR this season and is a top-two candidate for Cy Young. Sevy was elite, and losing him for almost all of the last three seasons put a serious wrench in the Yankees pitching plans. With him healthy and starting, those teams’ World Series chances would’ve significantly catapulted.

Sadly, that just wasn’t the case. Severino has battled injury on injury on injury and at the start of spring training 2020, it all culminated in Tommy John surgery. After a long recovery with more than one hiccup, he returned to the mound 707 days later — just in time to help his team make a late-season push for a Wild Card berth.

It was emotional. Personally, I have always loved watching Severino pitch. He has great mechanics and was able to sustain high velocity late into outings, making it more confusing why he was plagued by a multitude of arm issues. Nevertheless, the hope is that those issues are behind him, now that his elbow is fully healthy.

On Tuesday, he threw two scoreless innings with two strikeouts on 30 pitches. He topped out at 95.3 and averaged 94.5. That’s down from his 97.5-mph average in 2018 and 2019, but it was basically a rehab appearance for him and much of it came in decently heavy rain. Even sitting around 95 mph, Severino got seven whiffs on his fastball. That’s a good omen.

The slider and changeup looked great too. They’re filthy horizontal moving pitches that are perfectly paired for pitch sequencing. They spin in the opposite direction and have just enough velocity separation between one another (changeup – slider = four mph) and the fastball for both to be highly effective pitches.

But let’s be honest, we want — and need — to see Severino hitting the high-90s again to be fully confident that he is recovered and can be a shutdown reliever for the next week and a half (and hopefully, the playoffs). His slider and changeup will play up if he can get his high-90s fastball back, along with his solid control.

To get back to Severino’s sizzling fastballs, he must make a few adjustments. I’ll preface by saying that I’m not all that concerned with his velocity. The differences in the video analysis I’m about to conduct can probably be chalked up to him needing a bit more work on the mound. There aren’t any glaring mechanical deficiencies that are a cause for great concern.

Severino’s mechanics are still quite polished. They’re not really that different, either. That’s because when you think of how you want to teach throwing, you think of a player like Severino. He looks relatively low effort, has solid posture, and balances the movement between his two arms very well. He didn’t need to make any big changes.

The main difference is probably evident right off the bat: the finish. This is probably one of the most mechanically efficient pitches of Severino’s career, but there are many examples of him displaying a perfect finish beyond this one. It’s important to know that this finish is a product of a perfect process.

I’m going to focus on two slight mechanical differences that can explain the difference between 95 mph and 100 mph. First will be the forward move, and then it’ll be the posture as he gets down the mound.

In the slow-motion videos, it’s easy to tell the difference in the knee movement. An essential part of the forward movement is well-timed knee flexion. As your hips drift towards home plate, you want to hold your knee flexion so that your body is moving towards the plate, and not towards third base before you rotate your torso. By doing so, you give your body enough space to create separation.

Against the Rangers, Severino’s knee flexion happens early and more drastically than in 2021. It could be due to an inefficient windup, but I don’t want to draw any significant conclusions. The main point is the knee flexion changes the direction of his rotation and the quality of his posture. That leads us into the new set of clips.

For the purpose of this video, let’s call this perfect posture.

As a result of early knee flexion, Severino suffers from slight posterior pelvic tilt (he’s leaning back) as he makes his way down the mound.

These screenshots occur at just about when Severino reaches 90 degrees of elbow flexion. 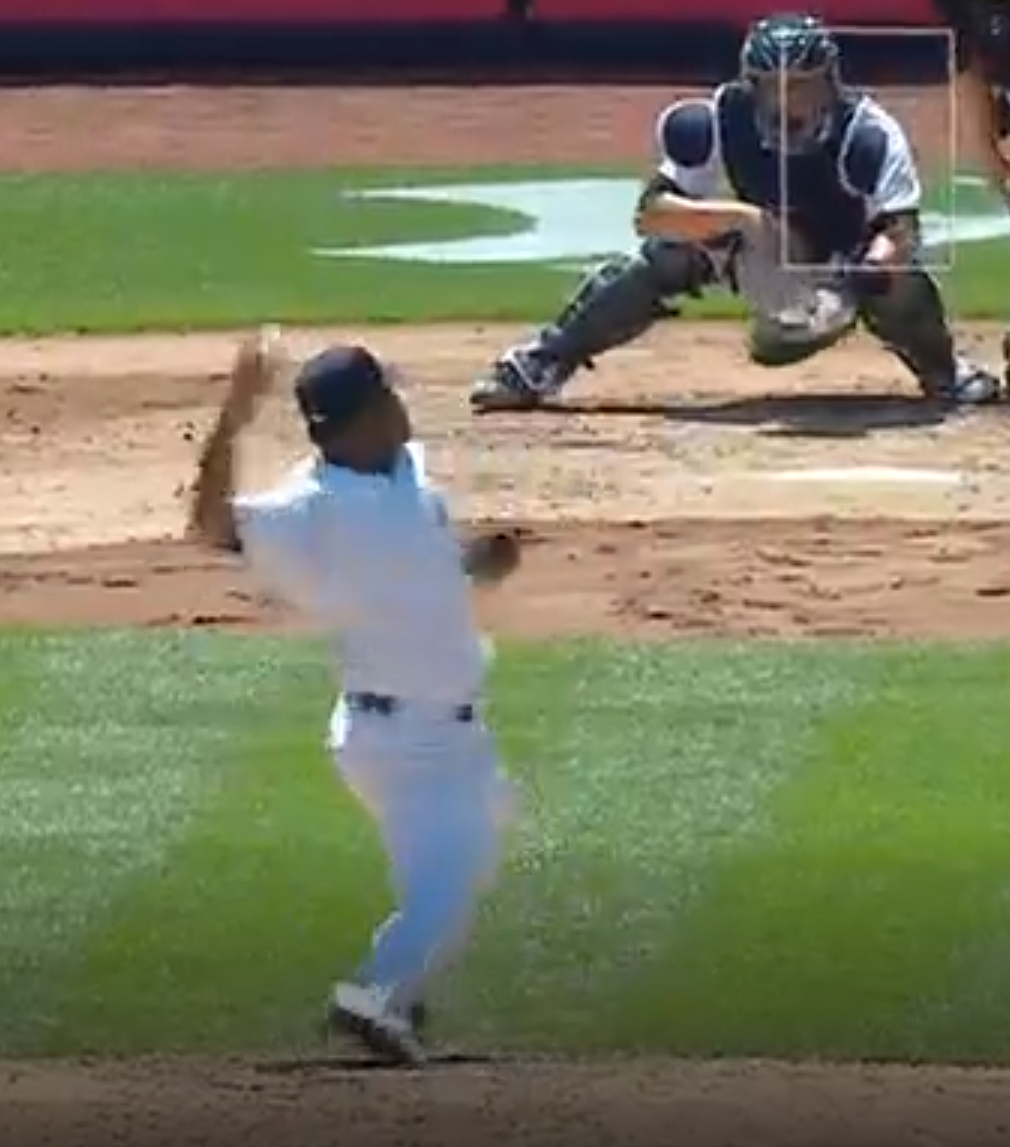 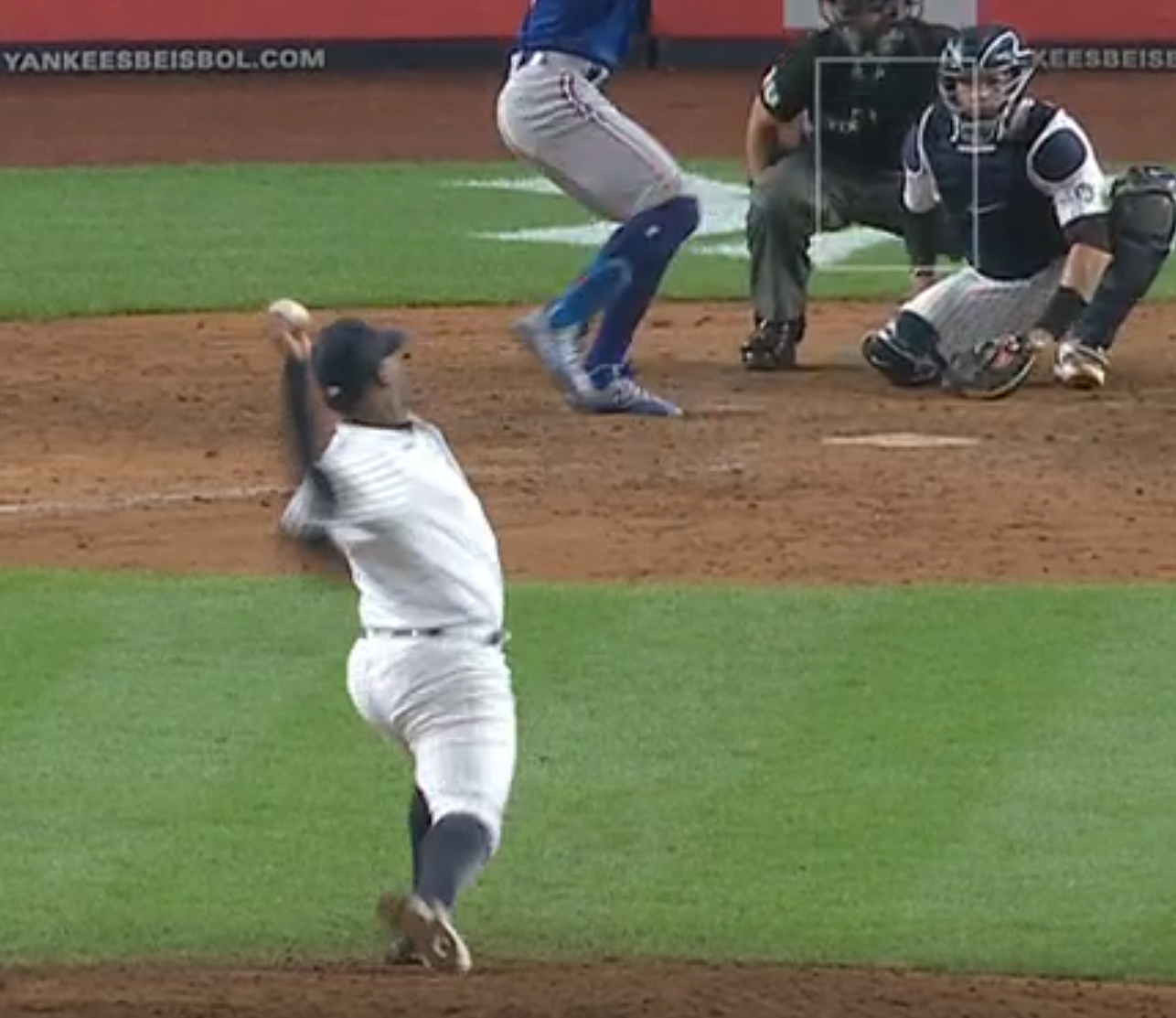 By losing his perfect posture ever so slightly, Severino’s arm is getting up a little slower and the direction of his rotation changes. In other words, he’s reaching 90 degrees of elbow flexion later than he used to and can’t pull his body forward as well with his glove side.

That all culminates into getting into the perfect finishing position, versus not. At the end of the delivery in 2018, Sevy’s numbers are directly facing center field. In his debut 2021 appearance, they’re pointing towards left field. My guess is that he needs a bit more time to get his legs back under him, as pitchers often say. If he can hold his knee flexion and keep his tibia about perpendicular to the ground, then he’ll see his velocity jump back up.

All of this is promising! It’s not like Severino looks significantly less twitchy or less athletic. It really does just seem like things will return to normal with some time. He still had the pace and confidence that fans are accustomed to seeing from him and that’s crucial. I can envision Severino returning to his starter form by 2022. For this season, let’s hope a bullpen or two can help him dial it back up to the mid-to-high 90s for 30-45 pitches at a time. I’m just happy to see him back on the mound in the Bronx with the opportunity to contribute.