Where does Luis Gil’s command go?

The Yankee rookie has flashed brilliance and stinkage all in the same start. What’s the underlying cause?

Share All sharing options for: Where does Luis Gil’s command go?

Perhaps no single player has summed up the agony and the ecstasy of the 2021 season better than Luis Gil. He came up as a 23-year-old to plug a hole in a COVID-depleted rotation, didn’t give up a run in his first three starts, and has been far, far less effective in the following three. He’s striking out 30 percent of the batters he faces, a terrific mark from a guy who was in High-A last time there was a full MiLB season, but he’s walking 15 percent, a big reason why despite his shiny 3.07 ERA, more predictive stats like FIP and xFIP are less rosy.

I wrote in the recap to Saturday’s game that I wasn’t sure how people felt about Gil. He had gone 4.1 innings, allowing just two earned runs. However, he posted a 3:2 K:BB ratio, again highlighting that degradation of command that spoils his high-velo, high-spin fastball. That command degrades over a start, look at his first and fourth inning pitch charts: 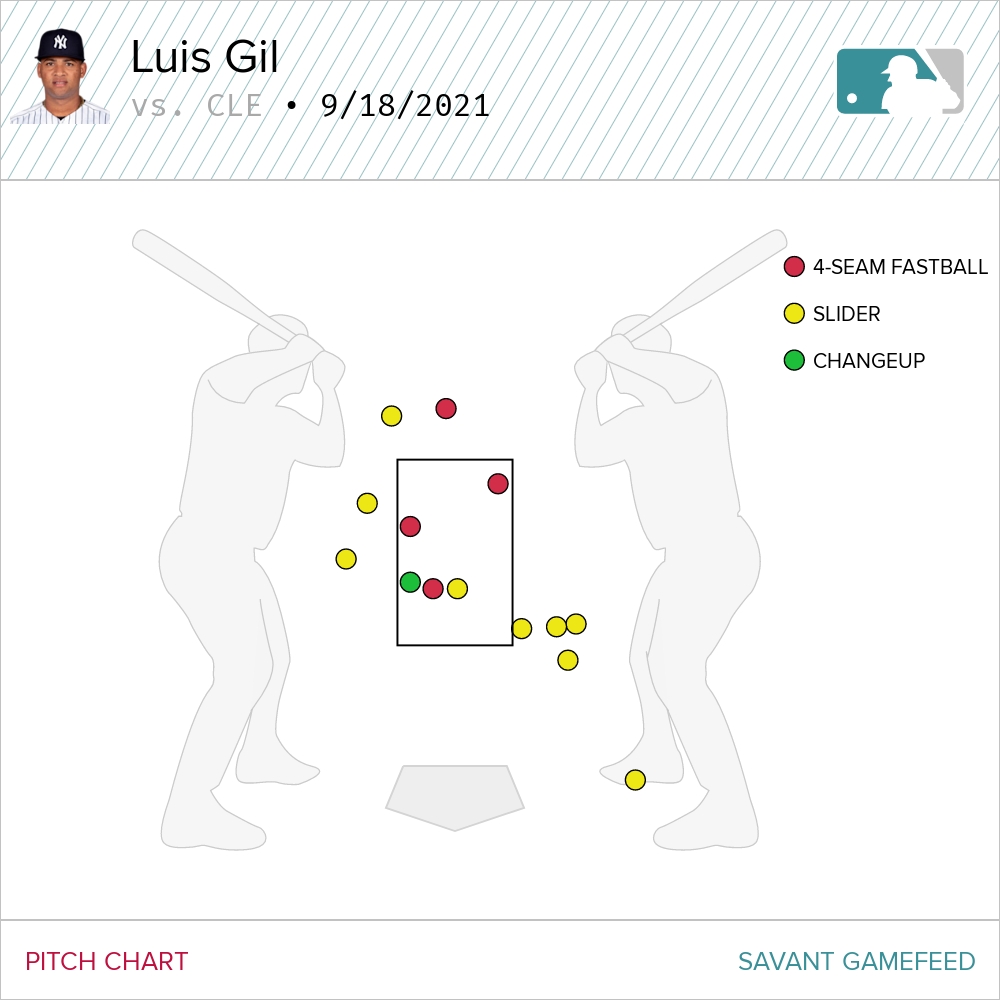 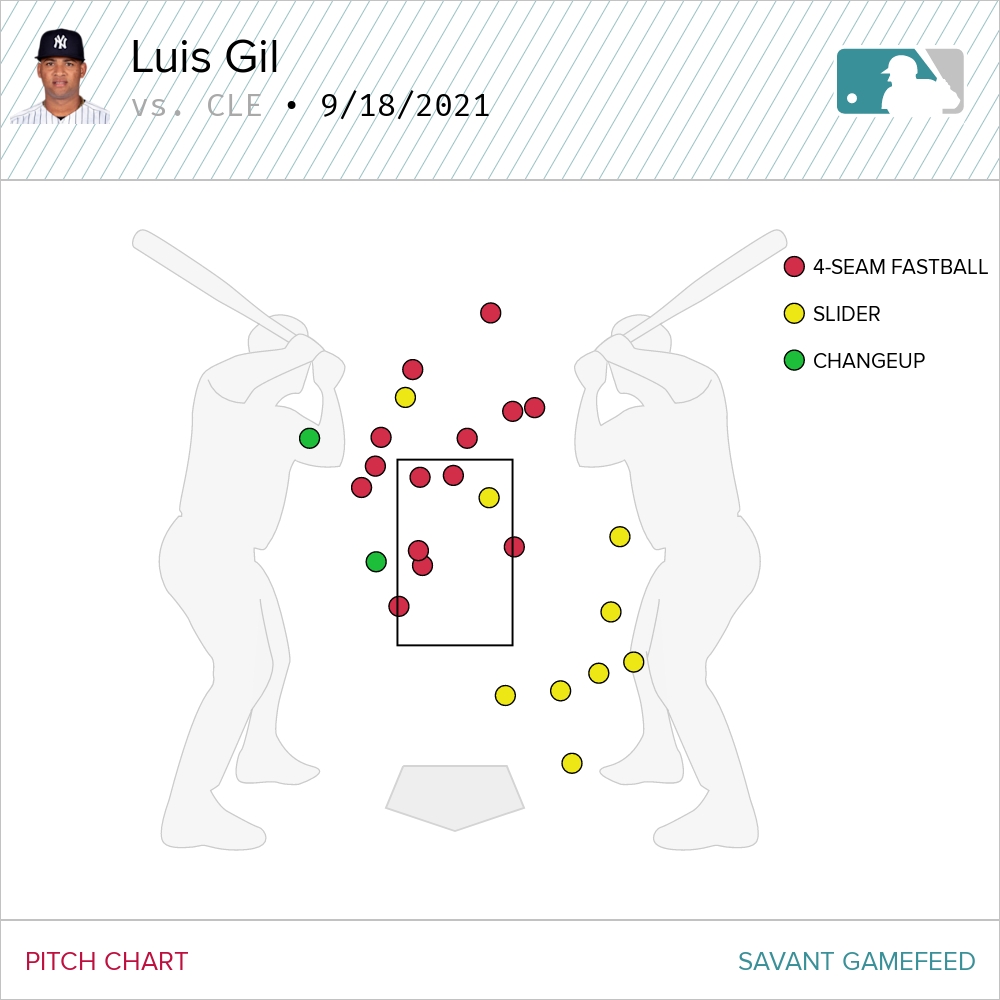 In the first, he hits the corners and edges well with the fastball, and although he loses that slider up, the sliders down are pretty much perfect pitches — at the knees and running away from right handed hitters, but close enough to the zone that they still fool hitters. Then by the fourth, all that command is gone, his fastball is all over the place and his slider is too far from the zone at the break point to entice a batter.

Command has always been Gil’s issue. His last FanGraphs scouting report gave him a 70 grade fastball and 50 grade slider, but 40 grade command at best. So we know that command is a problem, but what’s causing it and how do we fix it?

Well, let’s look at some pitches: 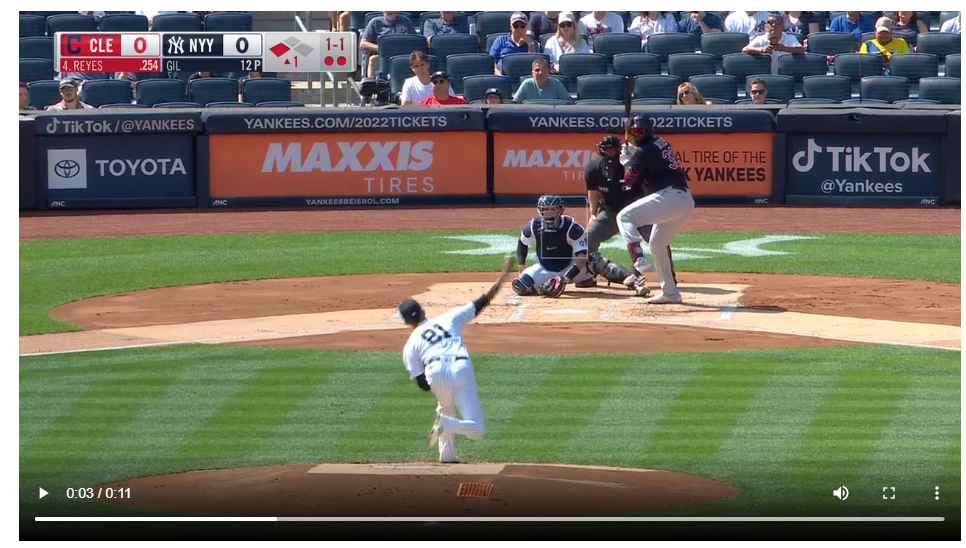 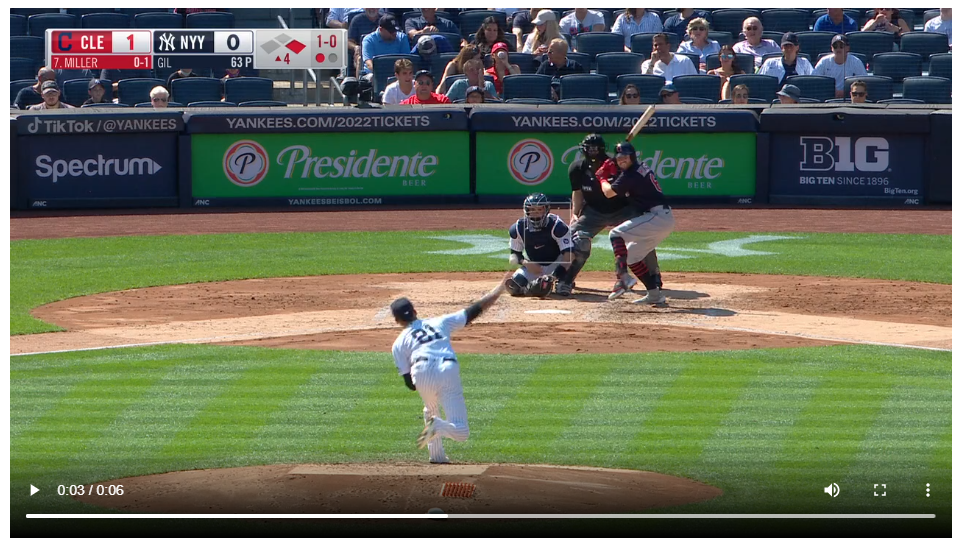 So we have a high-riding fastball that gets a swing and miss, and another high fastball that is an easy take. And you can see right there on those pitches, Gil’s arm is dropping significantly in the delivery of the fourth-inning pitch. He’s no longer “on top” of the baseball, instead, he’s slinging his arm in an almost Andrew Heaney kind of way, which pulls the ball far enough glove side that it’s never a strike, and never looks like a strike.

The fastball to Franmil Reyes, he’s working a higher arm angle and doesn’t pull the baseball, so it’s a much more conventional strikeout pitch — coming right at Reyes, his eyes get big, and he swings well under the path of the pitch.

So part of me thinks that this is just fatigue, that Gil is worn out after the biggest season of his life. His 106.1 innings pitched between three levels is by far a career high, and comes on the heels of the 2020 season where he didn’t see any in-game action. He’s tired, and has enough energy for the first couple innings, where his command is strong, but lags as the game goes on.

But I think part of it is also just a flawed mechanical process, and that’s why his command has always been a concern in scouting reports. Gil is a guy that’s always been able to rely on arm speed to get the ball up to 98 mph, but against major league hitters, the advanced discipline cancels out a lot of those velo advantages. Compare him to Gerrit Cole, even in Cole’s objectively bad Sunday start.

Look at the angle of the drive legs:

Not only is Cole’s drive leg lower, his torso is angled toward the plate, Gil is almost rocking backwards, loading up his arm while leaving energy that should be in his hips and thighs on the table.

This inefficiency continues all the way through the delivery: 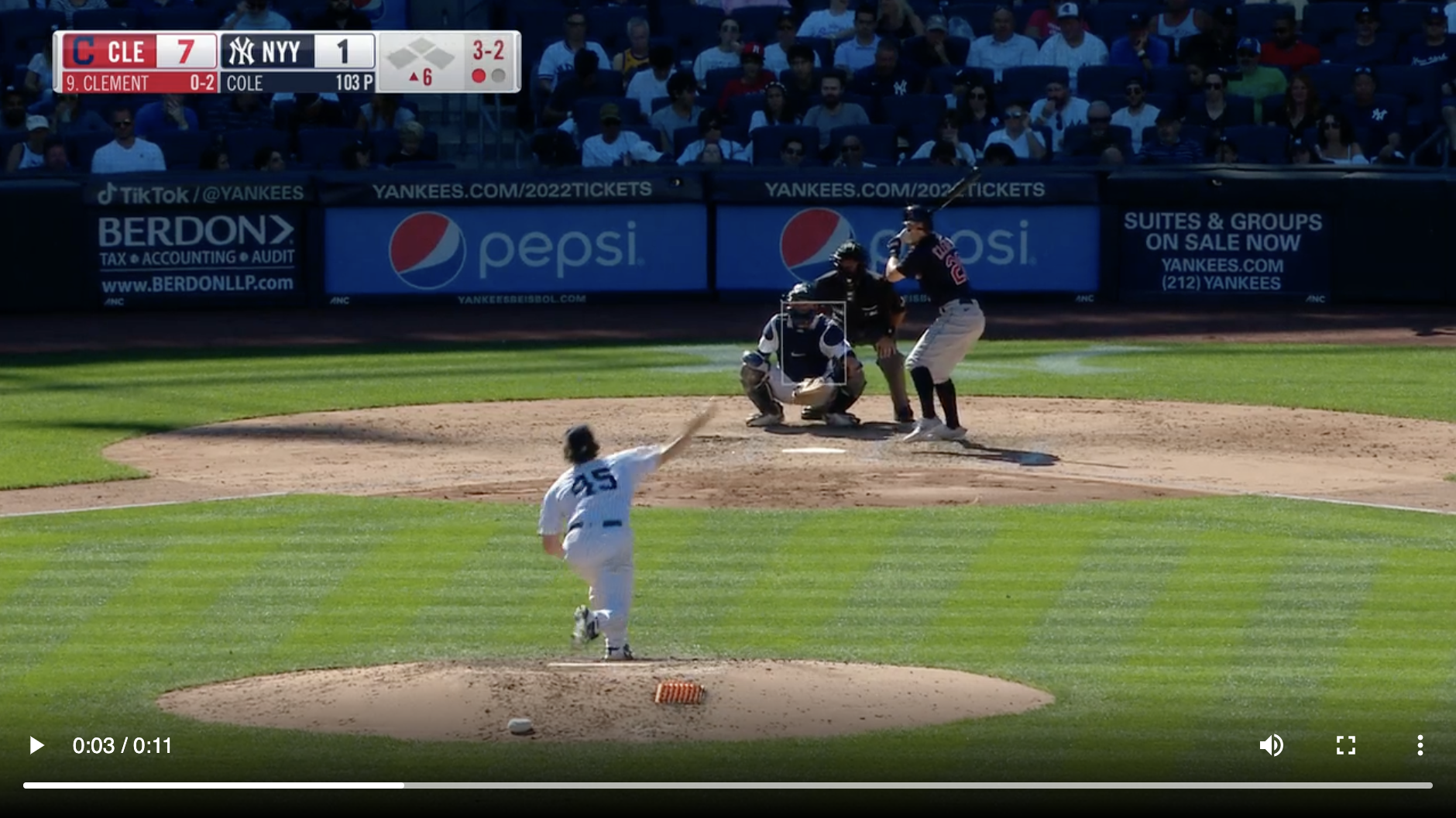 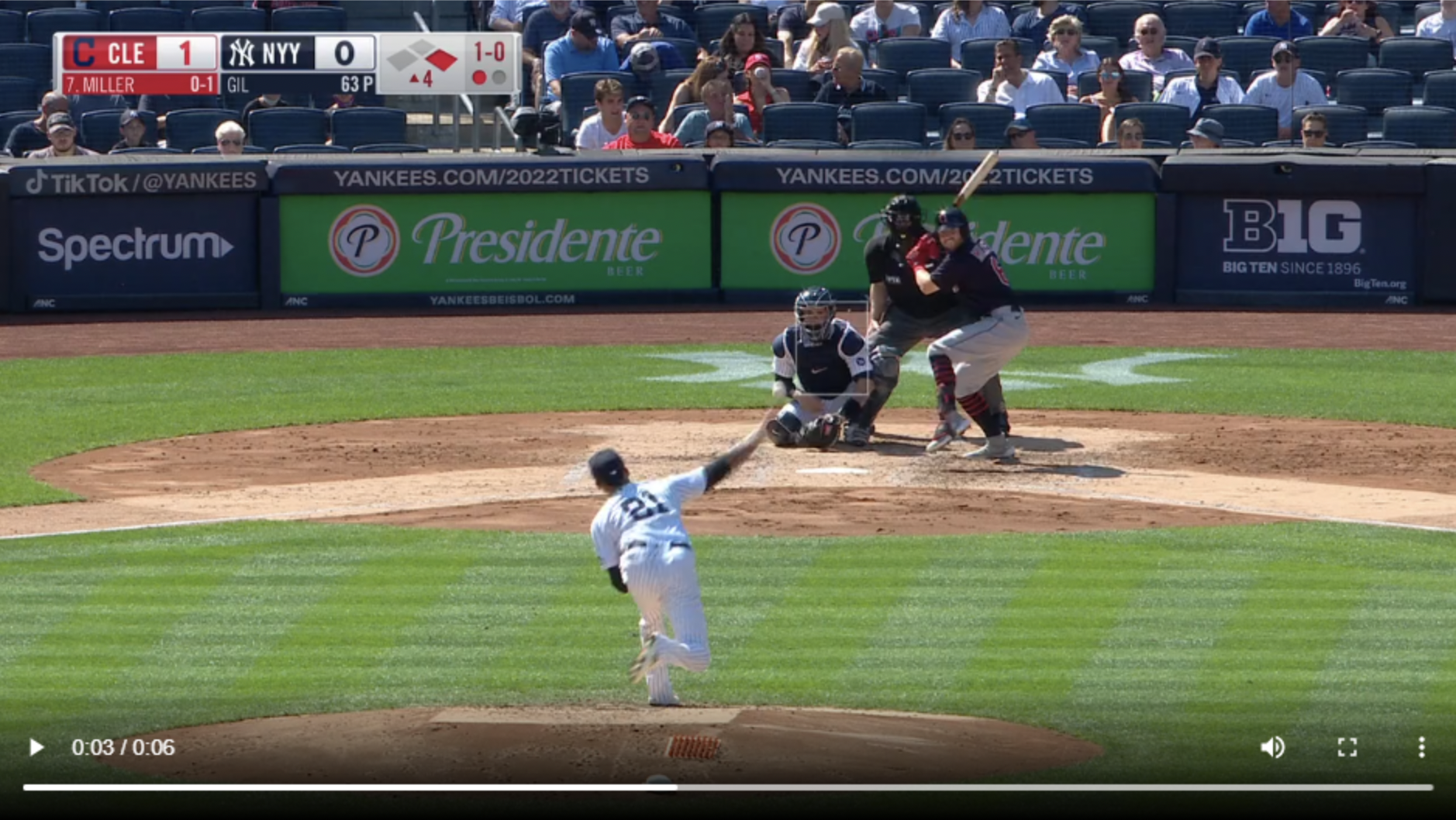 Now, “Luis Gil is not as good as Gerrit Cole” is not exactly breaking news. I’m not trying to turn Luis Gil into Gerrit Cole, simply using an object example of a guy with a great fastball who elevates his performance with better mechanics, that lead to a much more consistent release point and better command — Cole’s vertical release point has about 20 percent less deviation pitch-to-pitch than Gil.

So we have a pitcher with a live arm and inefficient mechanics. Fortunately, this means the offseason work for Gil is pretty straightforward — rebuild his mechanics by engaging his lower half and core more, relying less on that rocking action and pure armspeed. The downside is, saying “here’s what he has to do to get better” and that pitcher actually being able to do better are different things.

There’s an old saying in baseball that you get more out of not being stupid, then you get from being smart. Taking something bad and making it average is more valuable than taking something average and making it perfect — and this is where the work on Gil’s mechanics is different, in my opinion, than tinkering with Deivi’s.

Gil is doomed to the bullpen with a delivery like this, because his command will never be consistent enough to go even four or five innings. By incorporating those hips and preventing that first base leak, you bring his mechanics from extremely inefficient to just...normally efficient. Pairing that with his very good fastball, and the fact that his secondary offerings get better with good command, and you have a much more impressive pitcher going forward.