This is the Joey Gallo the Bombers envisioned when they traded for him at the deadline.

Share All sharing options for: Joey Gallo’s bat is heating up at the right time for the Yankees

The Yankees offense desperately needed help at the trade deadline. The power had dried up and the righty-dominant lineup meant pitchers could get into a groove pitching in certain lanes. And so, when they added a pair of lefty sluggers in Joey Gallo and Anthony Rizzo, the batting suddenly order looked balanced and with fewer soft landing spots.

Today I’d like to focus on one of those hitters. Joey Gallo has one of the premier power bats in MLB. Since his first full season in 2017, his 148 home runs are the sixth-most in the league, and his .290 ISO is third-highest.

Of course, the Yankees knew what they were getting in Gallo: a prototypical three-true-outcome hitter. Unfortunately for him and the Yankees, his career in pinstripes didn’t quite get off to the start either party envisioned. Through his first 35 games as a Yankee, he slashed .130/.291/.325 with six home runs — good for a 74 wRC+ — and a 40.4 percent strikeout rate that was high even by his standards.

Things were so bad at one point that I felt compelled to dive into his struggles to see if I could diagnose the causes of his prolonged slump. The biggest culprit I could identify was a sudden inability to slug fastballs in the zone — his bread-and-butter pitch to hit while with the Rangers.

Well, I’m happy to report that it appears Gallo’s bat is starting to heat back up.

Joey Gallo has homered in four straight games - the second time in his career he has done so. He also did it earlier this year.

Dating back to his day off during the recent series against the Blue Jays, Gallo is hitting .261/.357/.783 with four home runs in the seven games in which he has registered a plate appearance. That’s good for a 189 wRC+, which is slated to go up even more after his pair of home runs and single in last night’s contest.

So what has changed for the lefty slugger? Many point to the fact that he was dropped in the lineup after that day off vs. Toronto. It’s been well-documented how Gallo preferred to not bat at the top of the lineup while in Texas. He benefitted from an inning or two to settle into the rhythm of the game and gauge how the pitcher was attacking hitters. It is interesting that Gallo performs far better batting fourth-through-sixth (.847 OPS, 120 wRC+ in 1565 PAs) than first-through-third (.621 OPS, 74 wRC+ in 249 PAs). However, I feel this explanation is a bit of a red herring.

Instead, I’d like to zero in on a separate change Gallo made following that rest day. It appears that he has tweaked his batting stance so that he is a tad more open at the plate. Then, as the ball approaches the plate, he takes a positive stride forward with his momentum heading toward the mound, bringing him into a more neutral position as the ball enters the hitting zone.

Let’s compare video of his mechanics before that day off and after to illustrate to subtle differences. Below are two videos, followed by freeze-frames at key moments.

As I said, the change is quite subtle, but what I want you to pay attention to is the positioning of his lead foot at setup, and the path it takes during his load. 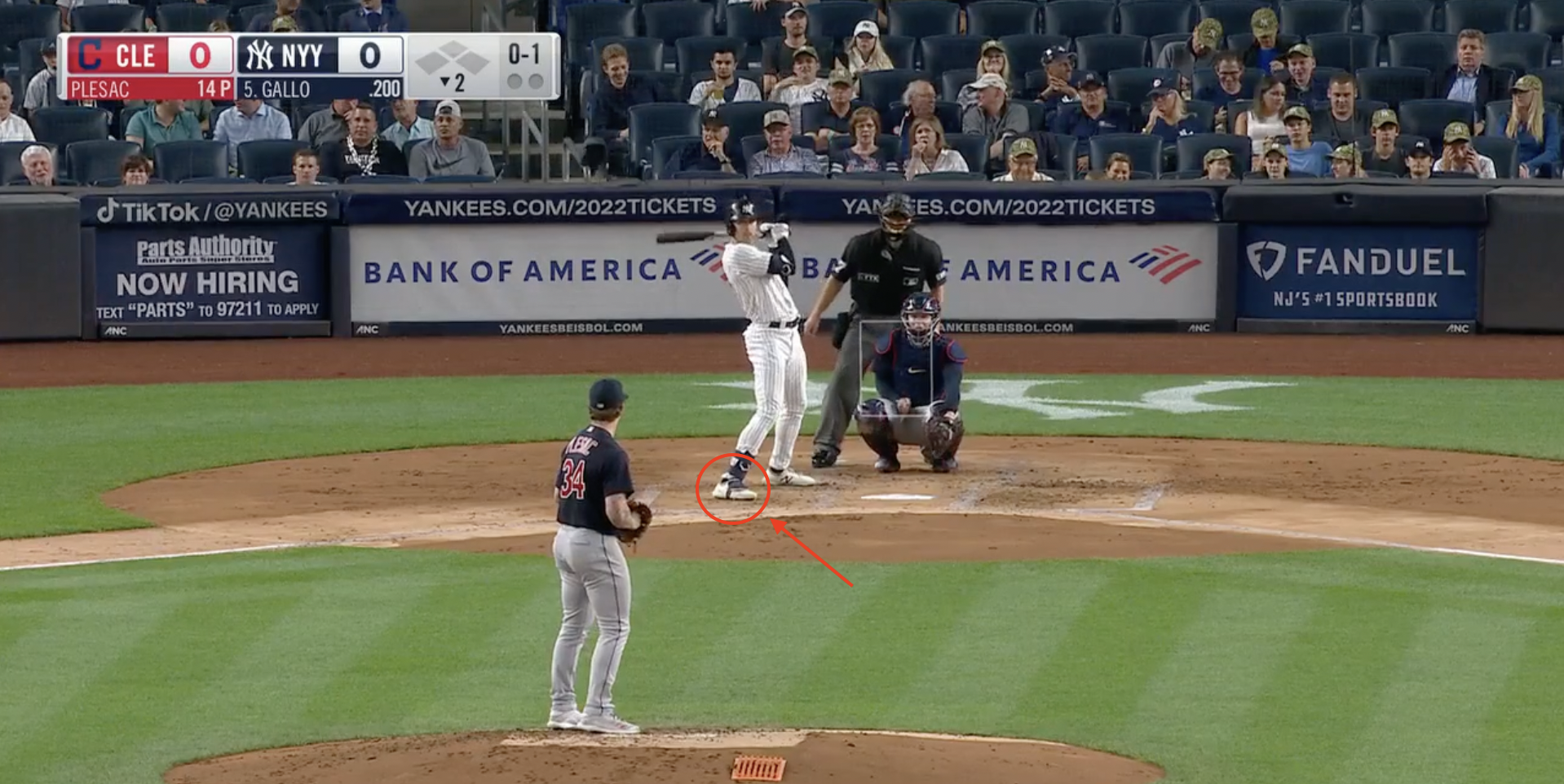 You can see above how in recent games (right image) he is standing with a slightly more open stance. Notice how his right toe lines up with the New Balance logo of his back foot before the day off (left image). After the day off, that same toe is now in line with the heel of his back foot. 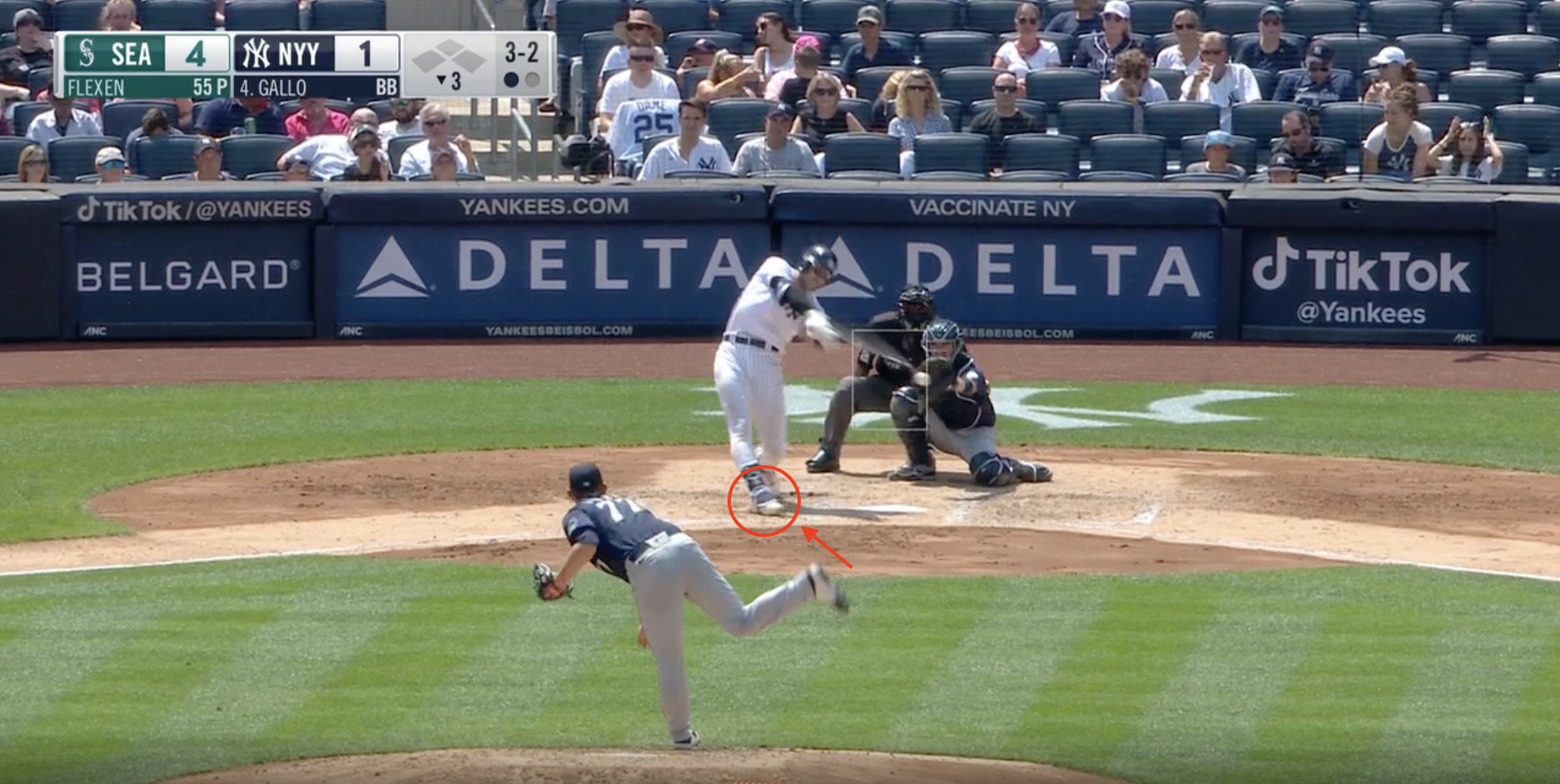 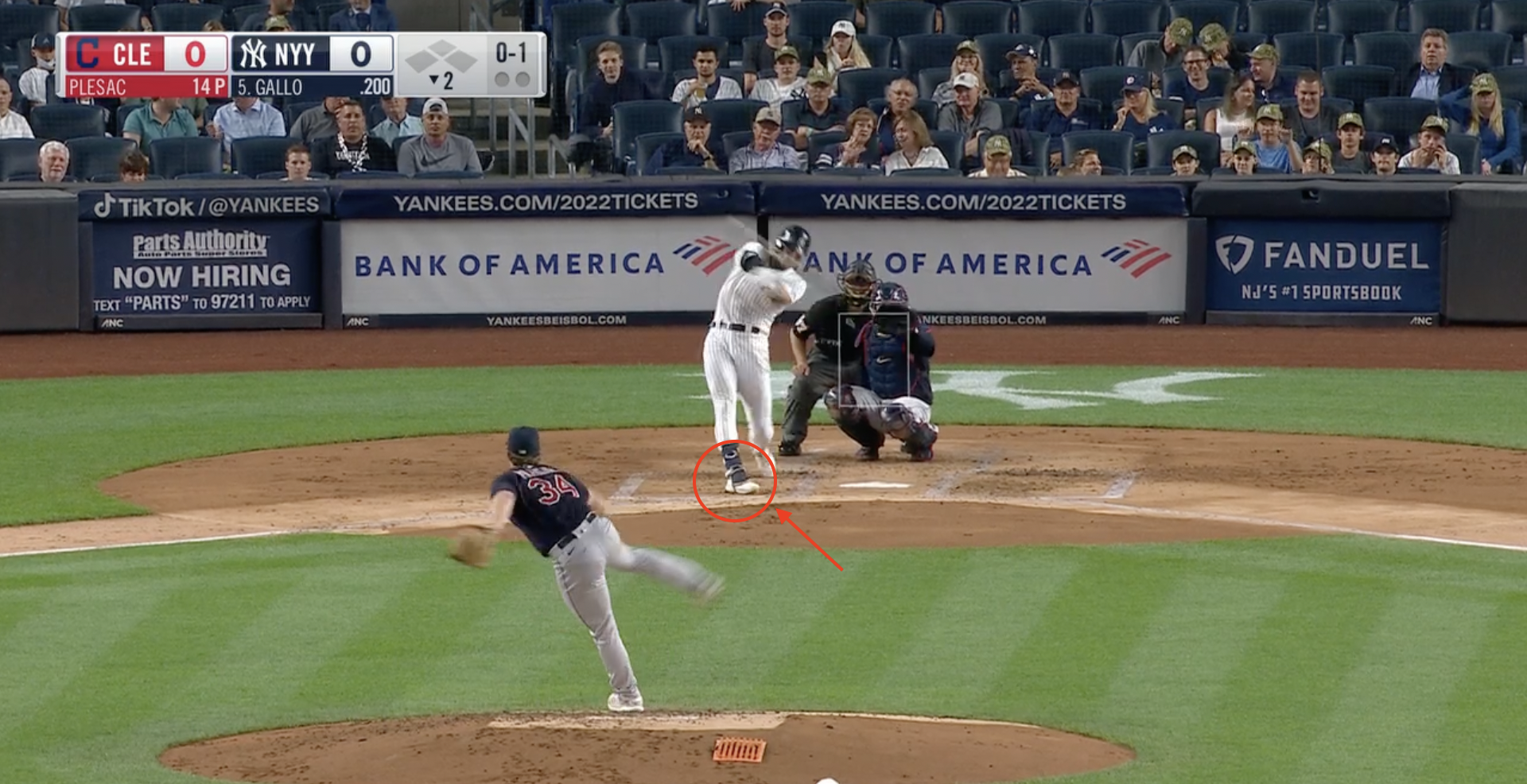 The marginally more open stance allows him to take a positive step, whereas with the older batting stance, the lead leg charts a more static up-and-down path. He was falling prey to stepping in the bucket at times, which robbed him of power and greatly reduced his plate coverage. (Shoutout to my colleague Esteban for helping me identify and understand these swing mechanics.)

Now with the mechanical adjustment, he is not only able to cover the pitch on the outer third, but drive it with power. It’s no surprise that his six home runs since last Friday have all come against pitches middle-to-away. 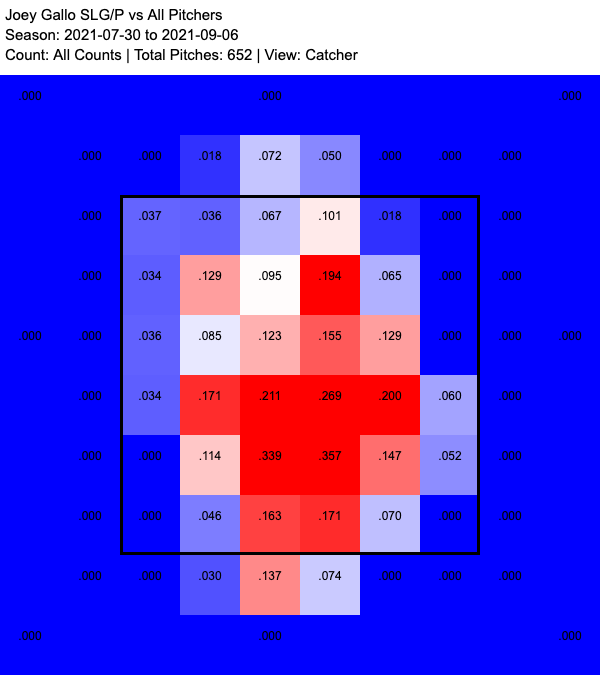 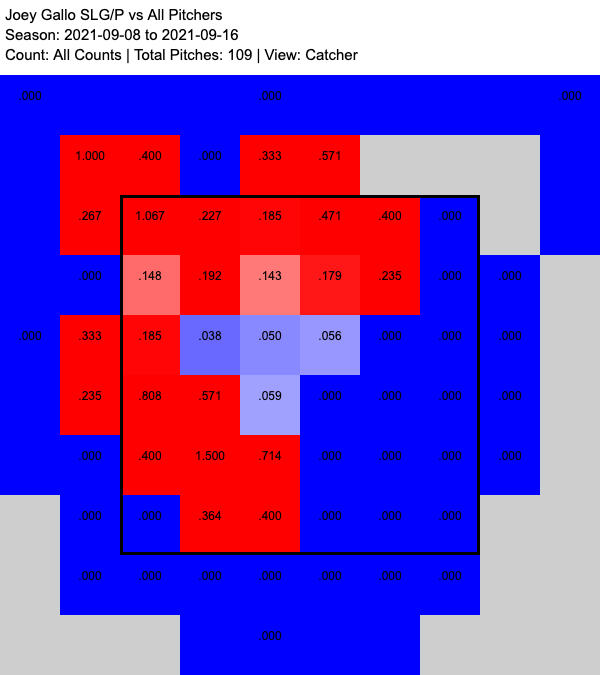 The Yankees will have to fight tooth and nail to get into the playoffs. Their best path to achieving that is for their sluggers to hit as advertised. Joey Gallo has shown over the last week that he, like Aaron Judge and Giancarlo Stanton, can almost single-handedly propel the team forward with his prodigious power. It took a while, but the largest outfield ever assembled is finally beginning to slug together. Long may it continue.