Like many hitters, Gleyber Torres’ power lies in his hips

The Yankees shortstop’s swing is close, but still lacking juice.

Gleyber Torres hit a lot of home runs in 2019 — 38 to be exact. In almost 600 plate appearances since then, he has hit a whopping nine. But many Yankees fans know that, as his numbers aren’t exactly a secret.

Torres’ power is gone. There’s no other way to put it. When he went on the IL with a thumb sprain early in August, I grew more concerned about his power outlook for the near-future. Any injury in the thumb/hand/wrist area is worrisome because it can significantly sap whatever power a hitter has.

At the same time, since Torres’ injury was not significant, this could have been an opportunity for him to figure out his mechanics and attempt to determine a course of action for the home stretch of the season. In other words, I was hopeful that Torres could use this time to see if he can get at least some power back.

I acknowledge that Torres literally could not take too many swings because his thumb was hurt. However, his hands aren’t the issue. He and hitting coach Marcus Thames must know that. The problem is his hips. It’s been his hips since the beginning of 2020.

That being said, let’s check out some swings from the first week of September to get a glimpse of what’s going on with the two-time All-Star. He hasn’t had that many offerings, since he was more or less benched for two days, but below are a few.

This groundball up the middle came on an 82-mph curveball over the middle of the plate.

Here is another poorly-timed swing from Torres on a slider also over the middle of the plate.

Torres put a bit more of a charge into this fly out to center on another middle-middle curveball, but he’s still not fully on time despite hitting it at 99 mph.

The next one is a pretty decent swing. Gleyber grounded it to third because he was early, but the intent is there. He just can’t seem to put it all together.

Here is an awful 2-1 swing. Situationally, this is as bad of a swing decision as one could make. Most of Torres’ swings have been better than this one, but it’s a good anecdote for where his approach currently sits.

I probably don’t even have to say it, but Torres looks lost in the batter’s box. By my generous count, he’s made two — maybe three — good swings at the plate since returning from the IL. When he swings with intent (he hasn’t done very much of this), he’s not on time. When he actually gets a barrel on the ball, he’s not on time. My guess is that this involves the poor mentals affecting the physicals. Of course, it’s important to specify what exactly is going on physically, because these swings aren’t even close to what we saw in 2019. It’s probably a good thing that it’s so obvious.

Anyways, here are two of my favorite swings from Torres from that memorable campaign. First, we have a home run to dead center at 108 mph. All I have to say is, PLAKATA.

And another home run, dead-pull off José Suarez and 107 mph off the bat.

Some people have tried to argue that Gleyber’s power in 2019 was flukey. I don’t buy it.

Do I think that Torres will regularly pop off 38 home runs in a season? No. But I’ll make it clear that if he is swinging like he did in 2019, 30 homers is realistic. From a pure scouting/mechanical perspective, he is more than capable of driving the ball over the fence if he swings with this level of intent.

Now, with that said, I have to point out a few key differences in these swings. We’ll start off by focusing on two things in his leg lift and hip cork.

Focus your eyes on his front foot at peak leg lift. Against Means, the bottom of his foot is pointing towards third base. While against Suarez, the bottom of Torres’ foot is pointed towards the shortstop. That right there tells us about the direction of his loading. The best swings in his career come when he directs the leg lift with internal rotation of his front hip, rather than an up-and-down placement of his leg.

By lifting up-and-down and not rotating inwards, Torres is getting hung up on his back foot for his balance point instead of being hinged into his hips. The hip hinge is something I always look for when a player is consistently not on time. The photo slider gives you a better picture of that. You can see where his head is relative to his knee as it reaches its peak and the direction his head is pointing: 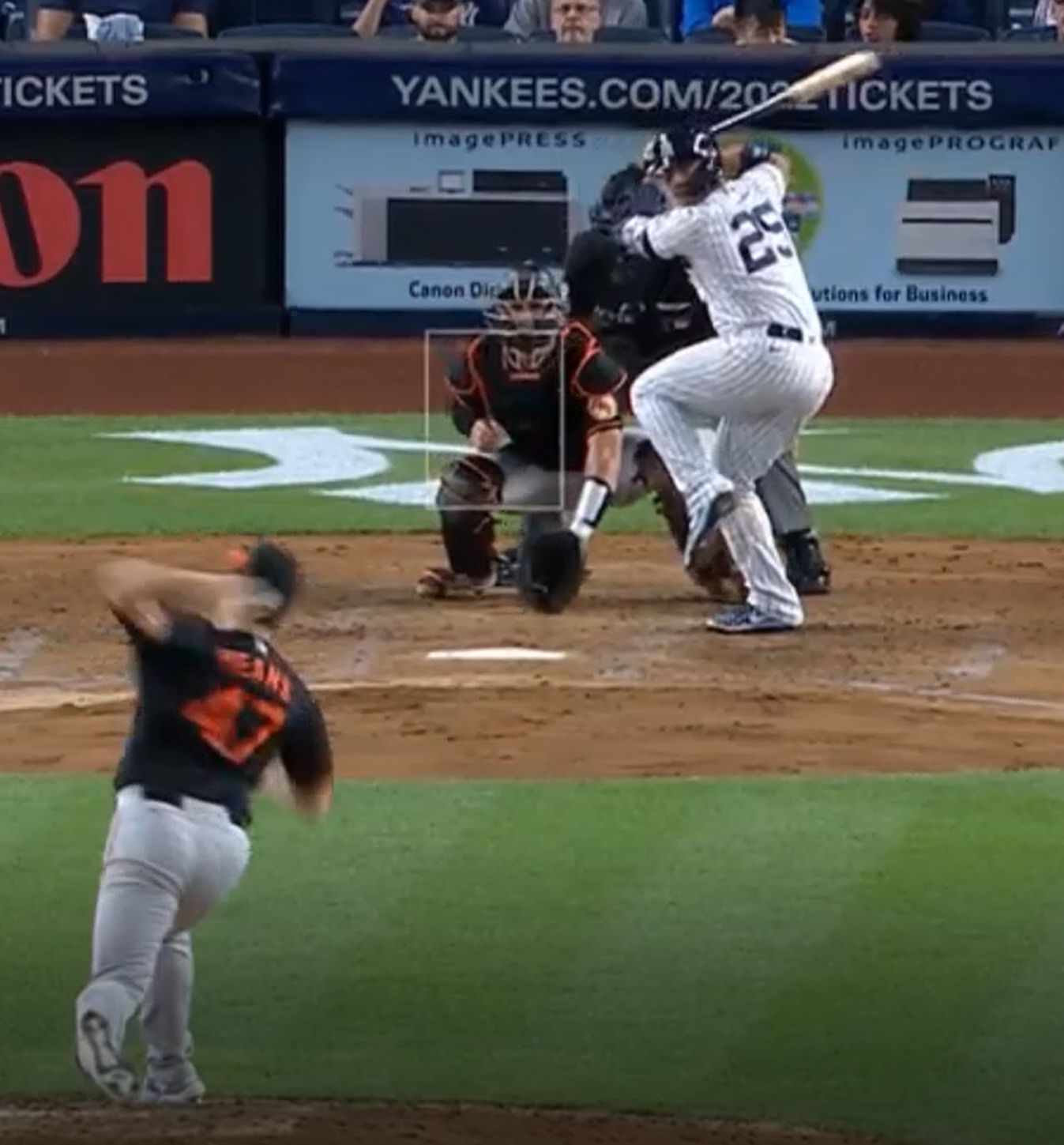 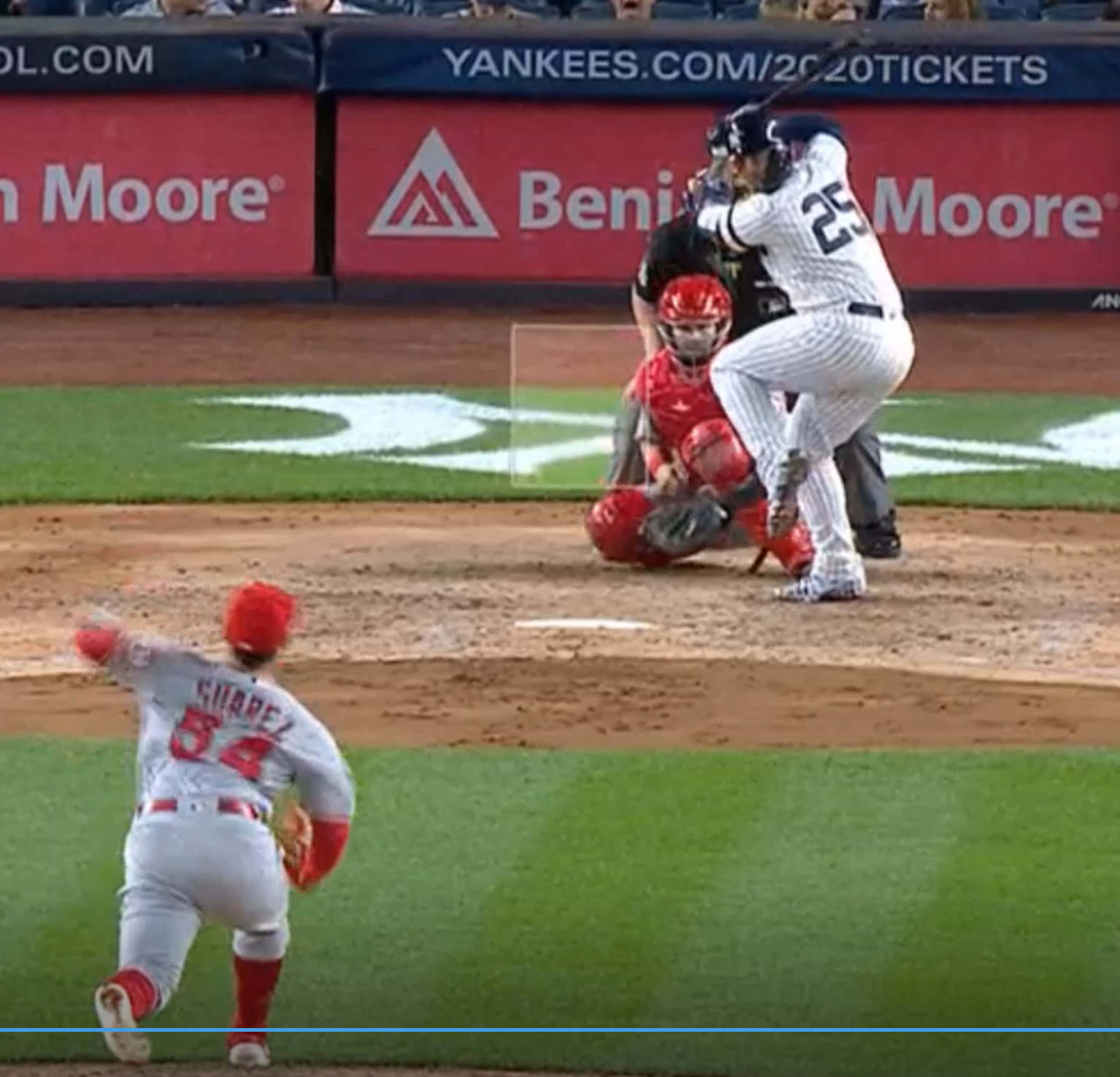 It’s very odd to see Gleyber’s struggles being rooted in a lack of movement in his swing. Similar to what ailed Sánchez, it really just looks like his focus is putting the bat on the ball.

The thing is, Torres already has a great hit tool. His bat control is very good and he is capable of hitting the ball hard to all fields at high rates despite being undersized and not a prototypical bopper. His hips have almost ceased all movement. For this last part, focus your attention to Gleyber’s belt buckle.

Here, it becomes more apparent that Gleyber’s issue stems from the lack of an efficient forward move. Baseball players are rotational athletes. For any rotational athlete who is trying to efficiently produce power, they must have a smooth forward move with their hips. This is where a hitter, or pitcher, gains ground in the direction of the mound, or the batter’s box, while staying in their hip hinge.

Torres’ energy transfer in his swing against Means is rigid and abrupt because of the lack of a forward move. He sits over his back leg and once his foot plants, his hips rotate and fire. It’s segmented. Compare that to 2019, when you could see his glutes slowly gain ground towards the pitcher’s mound as he unwound his hips in preparation for the pitch. His back belt buckle shows that he has a smooth progression in his unwinding that leads to a rapid rotation at foot plant. If he did this against Means, that batted ball probably would have flown over the fence.

The lack of forward move is directly related to the beginning of his leg lift. Since Torres only picks up his foot and doesn’t rotate it inwards while hinging his hips, he never gets into the appropriate athletic position to unload his hips and barrel. These teeny-tiny differences in the video are the enough to throw off the energy transfer in the kinetic chain. Those differences could mean a home run, or a fly ball on the warning track. If Gleyber doesn’t begin to better utilize his hips, he will continue to ISO under .100.

There comes a point when a sample of 600 plate appearances speaks for itself, but I think that this is something that Torres and Thames could work on together. He’s shown the ability to hit the ball deep in the air while not being on time. The power is so close to coming around if Torres can do what he does best and use those hips! With the Yankees’ offense struggling, there is no better time than now.