With incredible timing mechanisms in his swing, Voit has hit anything thrown his way this month.

Luke Voit is a very talented hitter. There is no evidence to suggest otherwise. His body of work with the Yankees has been impressive, as his wRC+ by season has gone from 195 in the scorching-hot second half of his 2018 introduction to 125 in a solid 2019, 152 in the shortened 2020, and 116 through August 31st of the 2021 campaign.

It’s not entirely clear where Voit’s true talent exactly lies in between those numbers. His 116 wRC+ is trending upwards this year. We’ve seen him hit his stride and begin to tap back into this power since the month began. The ZiPS projection system indicates that Voit will be a 135 wRC+ hitter the rest of the way, while THE BAT X estimates a 123 wRC+. His career 134 wRC+ is probably indicative of what we should expect from him.

That being said, Voit is who he is because of an elite swing. His mechanics are consistent — even when he struggles, he is still an above-average hitter because he has such great timing mechanisms in his process. Consider it this way: Voit’s approach fluctuates year-to-year. Looking through his seasons with the Yankees, it’s evident that his strikeout and walk rates vary on an annual basis. The same message comes across in his Statcast Swing/Take profile. His approach contributes to whether he is very good or elite, but Voit’s swing gives him a baseline for success. Without his swing, he would not be able to maintain said success while striking out 30 percent of the time (as he has done in 2021).

With that in mind, let’s dive into Voit’s swing this year. It’s the reason why he has been able to catapult himself back into the starting lineup despite the Yankees floating him at the trade deadline and acquiring the former All-Star first baseman Anthony Rizzo.

The Yankees slugger has a signature movement that sets him apart from his peers. I like to to call it “the hover.”

Before explaining why the hover works for Voit, I must point out a drill that is done across all levels of baseball: the hover drill. It can be done on a tee, live pitching, or any medium. Simply put, a hitter hovers their stride foot over the ground as they enter the hip hinge. The hitter then holds their hover for a random amount of time then triggers their swing as fast as possible. The drill trains a few things. First, it puts a hitter in a situation where they need to initiate their swings with different timings. Second, it stresses the need for a hitter to hold their hinge/gather with the intention of exploding out of it at random times.

Voit’s ability to do this in live action is extremely impressive. In 2019, he spoke with David Laurila of FanGraphs about his swing and hitting process. In that conversation, he spoke briefly on what he calls his leg swing and why he added it to his game:

“…For awhile I had a big leg kick. That started working for me, then I slowly… it felt like pitchers were quick-pitching me. Not on purpose, but rather the quicker the guy was to the plate… that’s something I struggled with. That’s when I developed this little leg swing.”

Voit later went on to say that the leg swing is his timing mechanism. That tracks with how he uses it in games. Depending on who is on the mound, he begins his leg swing at different times. Whether he is facing a high velocity fastball or a low-80s breaking ball, he is able to initiate his swing at whatever speed happens to be necessary.

Sometimes, he starts his leg swing earlier to adjust for high velocity, like against this 98-mph fastball from Nathan Eovaldi:

In anticipation of a different pitch mix coming from Minnesota’s Charlie Barnes, Voit starts his swing a little later and still barrels up the ball despite being slightly early:

This outcome is a direct result of Voit’s ability to hover however he needs to while staying in his hinge, waiting to rotate as fast as possible. The slider below gives a still-shot example of where the pitchers’ deliveries are within these two swings, relative to when Voit’s stride foot first leaves the ground: 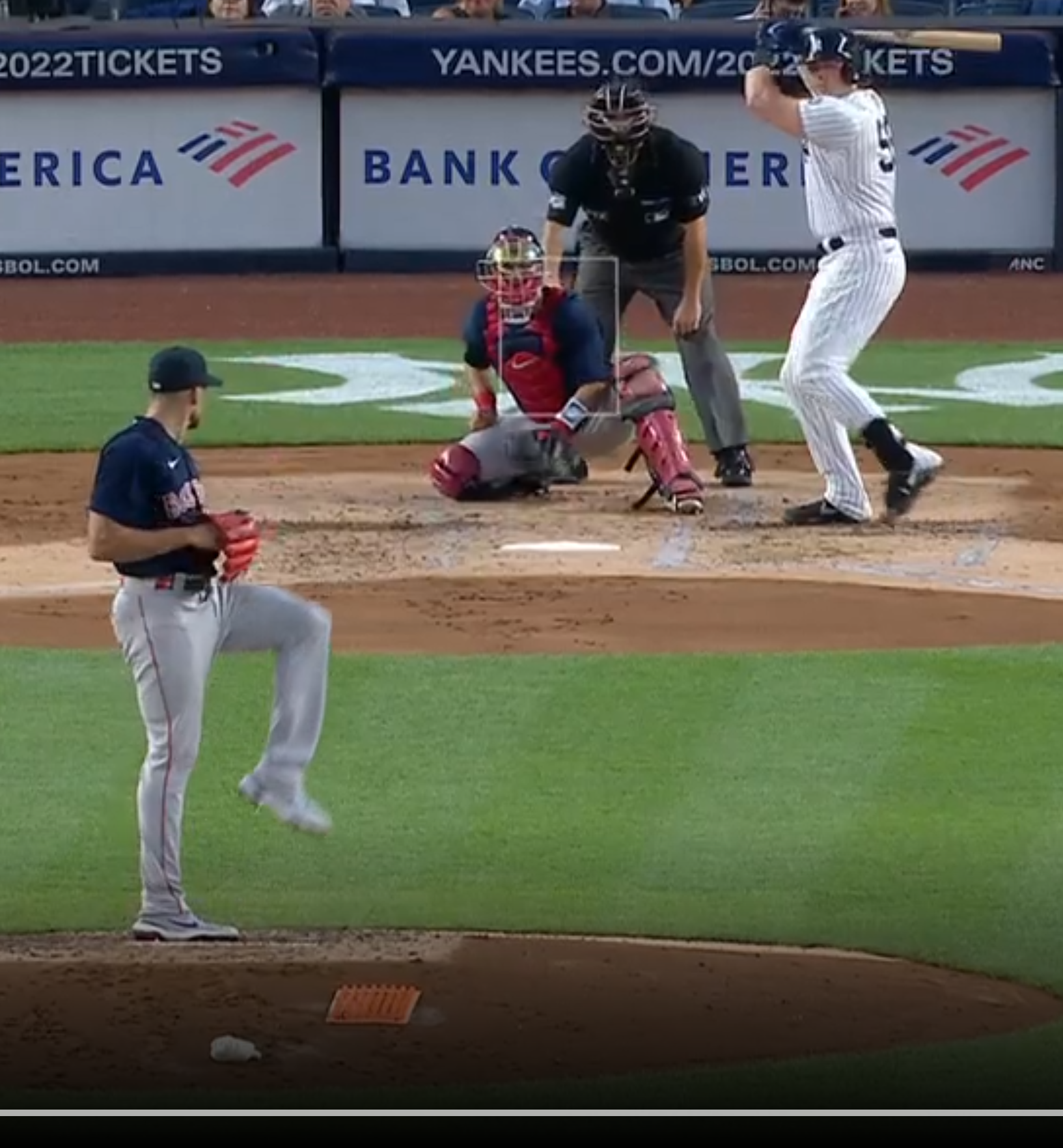 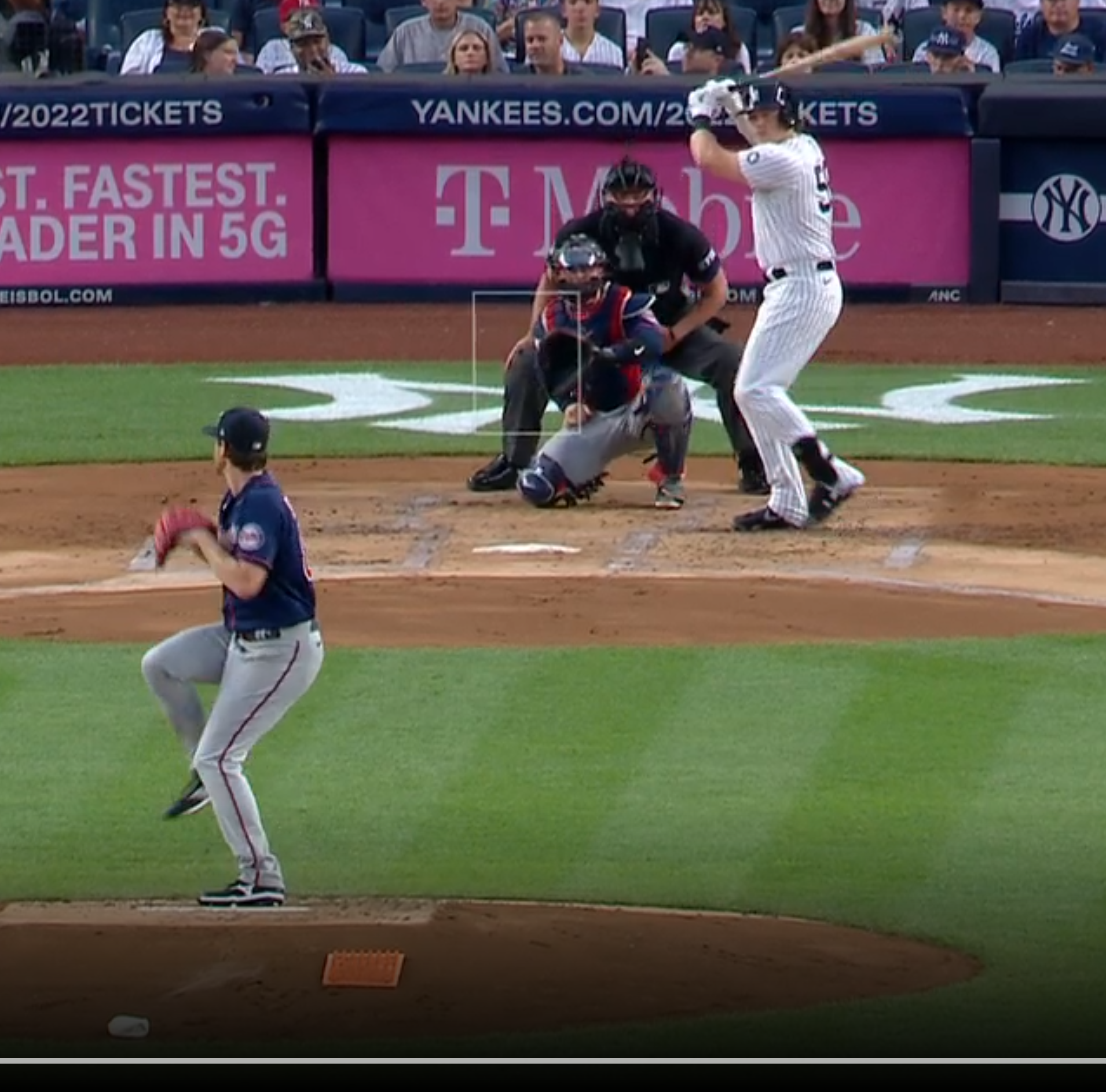 Eovaldi is just about to reach peak leg lift as Voit begins his, but Barnes is already in his forward move as Voit begins the leg swing. These swings came just a few days apart in the third week of August. The home run off Sean Manaea shown earlier came on August 27th. In a short span, Voit displayed his ability to spray the ball at over 100 mph to all fields. That’s when you know a hitter has it going.

Voit’s rolling xwOBA chart shows further that he is doing everything he can to get the best results:

Voit’s hot streak has stood out even with Aaron Judge and Giancarlo Stanton posting stellar months of their own. The three players entered action on Tuesday with a 153 wRC+, 176 wRC+, and 187 wRC+ in the month of August, respectively. They have led the charge for a reignited offense.

With Rizzo hitting the COVID-IL and struggling for the entirety of the month with a 50 wRC+, Voit has been a reliable bat for the Yankees, just as he has been for his entire tenure. He said it loud and clear: He has a track record with the Yankees that speaks for itself. Voit’s confidence is at its peak, and he deserves to play. It’s almost impossible to leave him out of the lineup when he has his timing at a place where it is right now. I’ll leave you all here with a quote from the slugger himself:

Luke Voit with 2 game winning hits today and some tough words as he fights for playing time at 1B with Anthony Rizzo. "I'm not going down. I want to play," he said. @News12LI @N12Sports #lukevoit #Yankees pic.twitter.com/eJj7c1ahu7