Breaking down Luis Gil’s MLB debut against the Orioles

Have the Yankees just discovered the next young star in the rotation?

Share All sharing options for: Breaking down Luis Gil’s MLB debut against the Orioles

When Gerrit Cole was scratched from his Tuesday start after testing positive for COVID-19, prospects for a Yankee win that night looked understandably bleak. They were just coming off a 7-1 embarrassment in the first game of their series against the Orioles, and now without their ace, fears of a home series loss at the hands of the AL East cellar dwellers crept in. That is, until Luis Gil delivered his first pitch in a big league uniform.

Gil got the call-up only hours before he was to take the ball in Yankee Stadium, raising some eyebrows that someone like Deivi García didn’t get the nod ahead of him. We’ve heard scouts rave about Gil’s stuff in the minors, and we got to witness it first hand night-before-last. And boy did he not disappoint.

Gil had split his time between Double- and Triple-A this year, going a combined 4-1 with a 4.13 ERA. Much like García, the book on Gil is that he racks up strikeouts, but loses command too often, leading to an abundance of free passes. This is why, in the same vein as his fellow pitching prospect, Gil’s debut in the Bronx turned heads.

From the first pitch, he looked composed and in control. He filled up the zone with strikes, and generated whiffs on all three of his offerings. His final line for the night: six scoreless innings, four hits, one walk, and six strikeouts on 88 pitches, mirroring García’s debut against the Mets last season.

The first thing that caught my attention was Gil’s electric fastball. The four-seamer operated between 93 and 99 mph, with the greatest distribution sitting around 95-97. More importantly, it displayed the prototypical rising life at the top of the strike zone that is so coveted in the league. He induced nine whiffs on 27 swings against the heat, and collected a pair of strikeouts including his first in the bigs.

The late riding action prevents the ball from falling off plane as it reaches the zone, making it near-impossible for the hitter to get on top and make contact. Gil’s high three-quarters arm slot allows him to get his fingers on top of the baseball, so that he can achieve a truer end-over-end spin axis that is desirable for a rising four-seamer. In addition, his 2,464 rpm spin rate would place him in the 89th percentile in the league, which combined with the elite velocity means he already possesses a top-end fastball by MLB standards.

His slider also looked promising, though maybe not as devastating as the fastball. He seemed to prefer the slider as the go-to put away pitch against righties, and it displayed sharp breaking movement at times. It also induced a jaw-dropping 75 percent groundball rate, showing Gil can get outs without needing a punch-out.

Gil’s changeup is more a work in progress. He threw it with some mustard, enough so that Statcast mistook it for a sinker all night. However some digging revealed that they were all changeups, despite sitting in the 93-94 mph range. 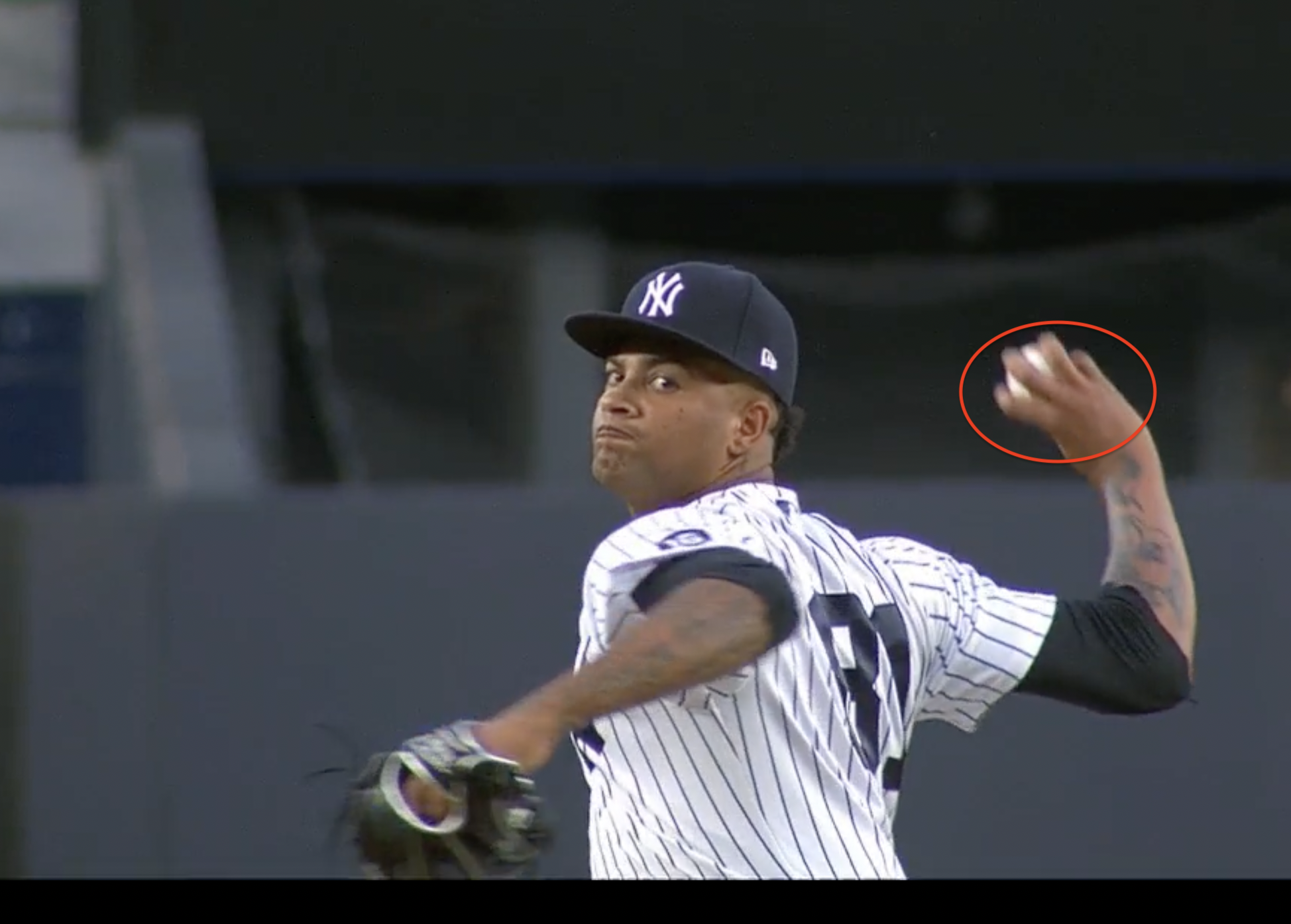 Although he lacked command with the pitch, I was most encouraged by its movement profile. It tunnels well with the slider, culminating in starkly divergent movement. In effect, the hitter is faced with substantial plate coverage on two pitches that look the same out of the hand.

It was by no means a flawless performance from the young righty. At times he was prone to overthrowing the fastball, and missed gloveside on numerous occasions. It felt like he was trying to throw it by guys rather than fully executing the pitch, and you can see below how Gary Sánchez tries to reel him in mid-AB, encouraging him to hit the target rather than chuck it as hard as possible.

As the outing wore on, it was evident that Gil was tiring. The fastball gradually lost velocity, bled RPMs, and caught too much of the zone with increasing frequency. By the middle innings, instead of a hard fastball whose life at the top of the zone caused hitters to whiff, it resembled an average heater whose lack of rise caused it to drop into the hitting zone.

He got away with this against a light-hitting Orioles squad, but fastballs like the ones seen in the above at-bat are the kind that better hitters park in the seats. The same could be said about the slider. In truth, its effectiveness came more from fooling hitters because of a missed location more than inducing whiffs on a quality pitch.

It is clear from this clip that Gil has trouble repeating his mechanics when throwing the slider. Even though he got the strikeout, none of the four sliders was executed particularly well. The first one two missed the target high, the third one backed up and froze the batter, and the last one was a cement mixer. Inconsistencies with his arm action and release mean he cannot achieve reliable location or movement. Against a decent batter, I reckon the outcome would not have been as favorable.

Finally that brings us back to the changeup. It is clearly a pitch Gil is still getting comfortable with, as his release point was ... inconsistent at best. The most common miss was for him to yank it into the zone. He lets go a fraction late, resulting in either a lawn dart or a pitch that catches too much of the plate.

Gil’s MLB debut gave us a lot to be encouraged about. After struggling with walks in the minors, he tightened up his command when behind in the count, issuing the lone free pass on Tuesday. The raw stuff is MLB-ready, it just needs the refinement of repetition. Gil seems to have leapfrogged the pitching prospects ahead of him — whether through injury (Clarke Schmidt) or ineffectiveness (Deivi García) — and is in pole position to carve out a spot in the rotation if not this year then in the near future. All I can say is, I cannot wait for his second MLB start on Sunday.