The Yankees’ newest slugging outfielder made an adjustment before the 2021 season to revitalize his career.

Share All sharing options for: Joey Gallo’s subtle swing changes have paid off

There aren’t many who can swing it like Joey Gallo. In recent Yankee history, I’m not sure there is a comparable swing. They’ve had their fair share of lefties with power, but those players were switch-hitters in Carlos Beltrán and Mark Teixeira, but none compares to the power of Gallo. The former Rangers All-Star has rediscovered his 2019 form this season after an off-year in 2020, and a swing change played a big role in his recovery.

My first thought in terms of pure swing comparison to Gallo is former Yankees first baseman, Jason Giambi. Let’s relive one of my favorite Giambi moments.

Oh, and apparently Gallo was a fan of the former Yankee slugger, and his dad has history at the Giambino’s hitting facility. You love to see these recreations!

Joey Gallo with a fan pic.twitter.com/UAnQ3J0q9Q

Giambi was an extremely quiet hitter with immense power. Gallo is not quite that. The movements are louder. Yet they do have some similarities. Both are imposing body types with slightly open stances whose power comes from gargantuan core and rotational strength. Gallo has noticeably more pelvic tilt in his swing, which is probably a key reason for his subpar hit tool, relative to Giambi in particular.

Nevertheless, Gallo’s power is generational. Now, about that swing — here’s a recent moonshot from the new Yankees outfielder.

This is a wonderful angle for looking at swings. Globe Life Field has left us with valuable video for mechanical analysis because of it. Generally speaking, this type of swing induces a lot of whiffs, which is probably the biggest weakness in Gallo’s game. He currently leads all qualified, American League hitters in K% and is in the 2nd percentile in Whiff%. That level of pelvic tilt so early in a swing can be detrimental. But why?

It has to do with a pitcher’s vertical approach angle (VAA) and a hitter’s attack angle. Take Gerrit Cole, for example. He has one of MLB’s flattest VAAs on his fastball, allowing him to find great success when throwing that pitch up in the zone. A hitter like Gallo creates an extremely steep attack angle with his barrel because of the tilt he creates with his pelvis. To make solid contact with pitches up in the zone, a hitter needs a flatter attack angle. Think of Juan Soto’s swing. In slow motion, you can easily see how flat his barrel is throughout as well as minimal pelvic tilt as his barrel comes through the zone.

Then there’s Gallo. It’s unfair to compare any hitter to Soto. I’m not doing that here. My intention is to tell you how his swing functions and how it’s improved to the point where he is back on a 40-home run pace and one of the best power hitters in the league.

By removing some of the steepness he had in 2020, he created a wider margin for error. It’s a subtle change. Here is Gallo in 2020:

These pitches are more or less at the same height in the strike zone and Gallo’s 2021 shoulder angle is flatter, albeit while still creating plenty of loft. The first picture is 2021 and the second is 2020: 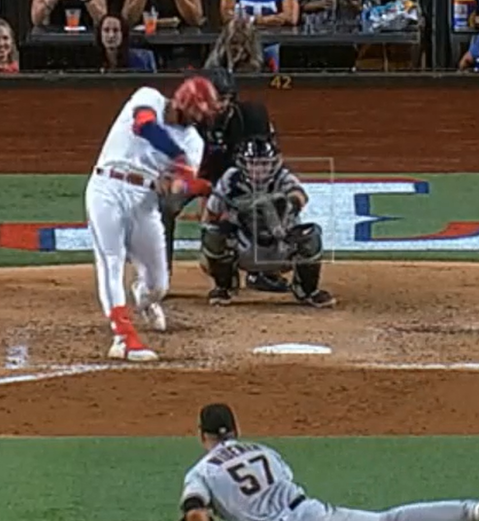 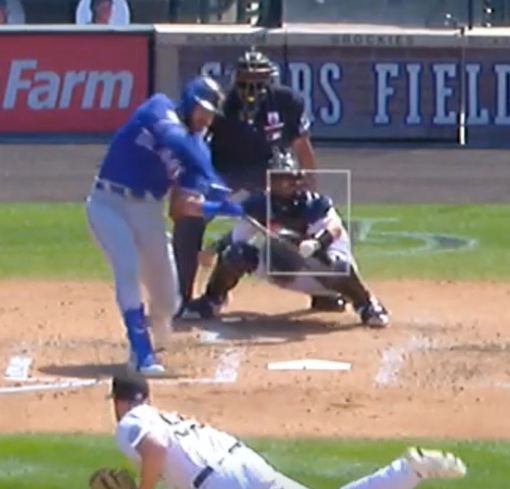 Gallo has been consistent with this all year. It’s enabled him to punch balls on the upper outside half of the zone. With this type of power, a mere flick of the wrist is all he needs as long as he maintains good posture.

This adjustment also contributed to a significant improvement in Gallo’s K% this year compared to previous seasons. In fact, his mark of 32.3 percent is a career low despite his ranking relative to the league. After his breakout in 2019, he regressed in the shortened 2020 season, but he is back in prime form just in time to slug for a team desperate for a power lefty.

Gallo did not need a total makeover. Just by watching him over the years, it seems like he is a rhythm hitter who will constantly tweak his setup to ensure he is in a comfortable enough position before he begins his swing. His stance was open in 2020 but that complicated things too much. Evening out his feet and standing more upright has kept him rotating in a more optimal direction.

In addition to that adjustment, Gallo slightly tweaked his pre-pitch movement. It looks like he’s cueing the reciprocal movement of a hip hinge by exaggerating a backwards lean.

Reciprocal movements in swings give a hitter both balance and stability. Think about it like this: when a pitcher enters the arm spiral, they have a simultaneous move with their glove arm that creates separation. Without that glove arm extension, they would lose efficiency in their arm spiral. The same goes for hitting. If Gallo tries to maintain his stability in his hip hinge so that he does not excessively tilt his pelvis like he has done so in the past, he needs a proper reciprocal movement. The pre-swing movement cues his body into the right mindset.

All these adjustments add up to an improved Gallo. Simple mental cues and subtle adjustments to make sure a hitter is comfortable in the box is all it takes sometimes. Light-tower power is hard to come by. When a hitter like Gallo has it, simplifying any excess movement will help, as long as it doesn’t restrict freedom in movement. I can see why Brian Cashman and company gave up the level and quantity of prospects they did to get Gallo. He’s an athletic, power bat who is firmly in his prime. He knows his swing and Yankee Stadium will perfectly cater to it.