Peralta has increased his changeup usage in August, and the strategy has been a smashing success.

Share All sharing options for: Wandy Peralta can largely credit his ascent in prominence to his filthy changeup

If I asked you who was the Yankees’ best reliever in terms of ERA in the month of August, who would you guess? Jonathan Loáisiga? Chad Green? No and no.

It’s nobody other than Wandy Peralta. In 11.2 innings this month, he has yet to surrender an earned run or an extra base hit, and he’s recorded a 9:1 KK:BB ratio. Before that, Peralta had been pretty underwhelming for the Yankees and his August 5th return from the COVID-IL was met with essentially no fanfare whatsoever. However, this turnaround has lowered Peralta’s ERA to 3.62 on the season. Something must have changed, so what’s the explanation?

Below is a comparison of Peralta’s pitch mix from before August and since the month began: 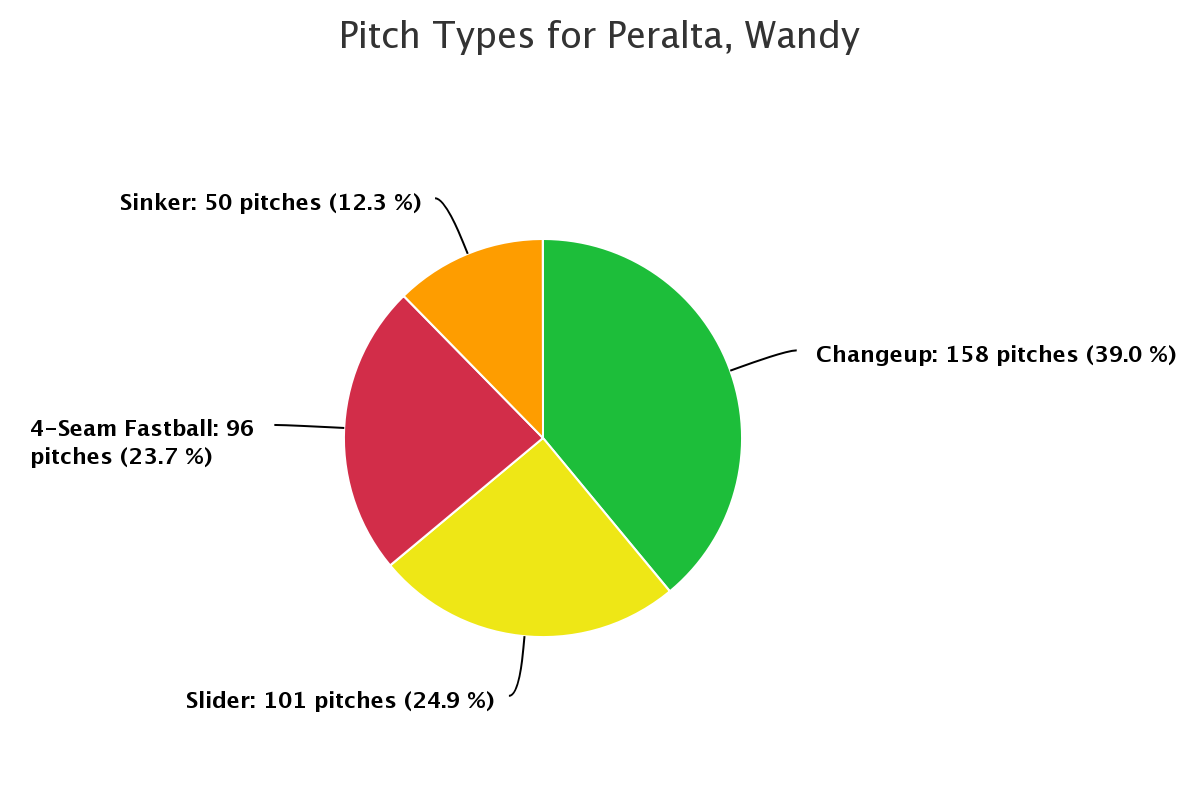 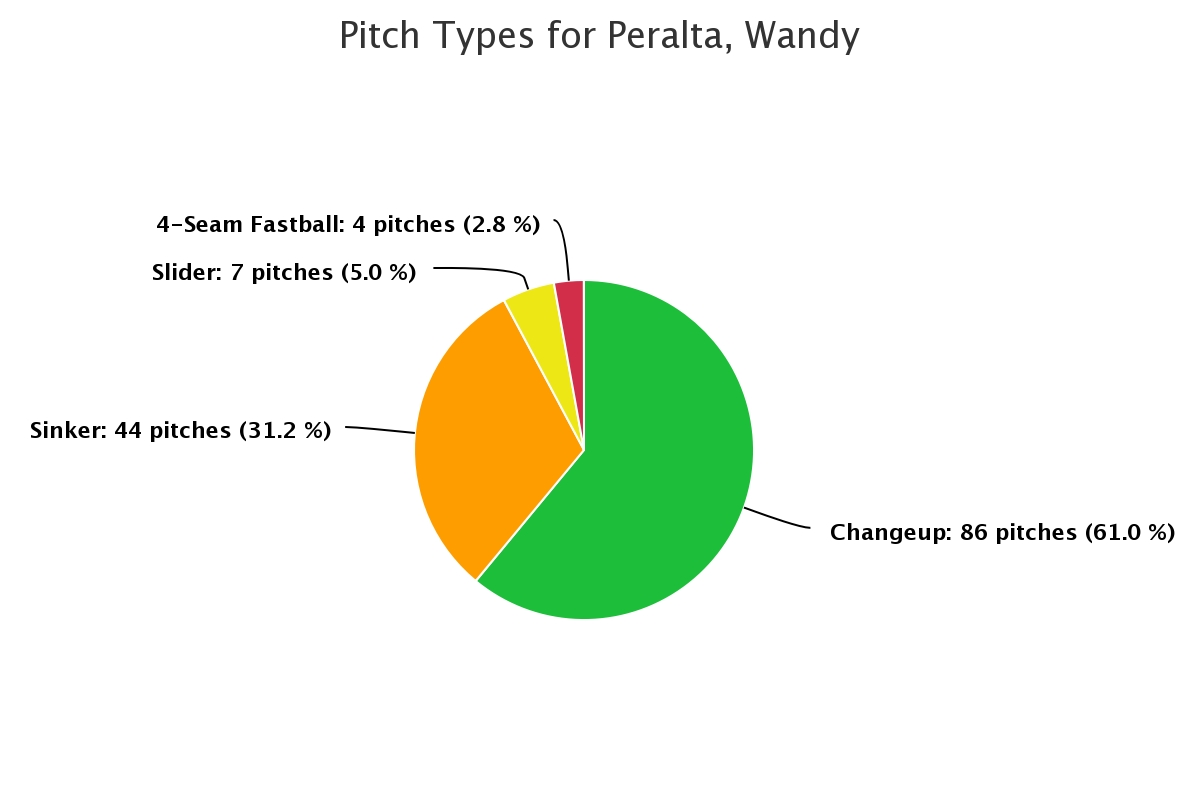 This is always a good place to start. If pitchers change their pitch mixes this drastically, they basically become new versions of themselves. For example, as Peralta throws fewer pitches, his command can improve from simply deploying his most effective and comfortable pitches more often. This fact is evident in hid 2.3-percent walk rate for the month. He has great feel for the changeup, which only incentivizes him to throw it more.

To quickly summarize, Peralta almost entirely faded his four-seam fastball and slider, and replaced them with even more changeups (21-percent increase) and made his sinker his primary fastball (18.9-percent increase). By doing this, he has become a two-pitch pitcher whose primary offering is his changeup. No lefty uses his changeup more than Peralta, making him a unique pitcher not only on the Yankee staff, but across the entire league.

Peralta’s changeup is not quite an airbender when you look at it, but it gets a ton of horizontal movement and is extremely deceptive from his arm slot. It induces chases like this one, even against good right-handed bats like Dansby Swanson:

A 39-percent changeup usage is very high, but for Peralta that was not nearly enough! It’s one of the best changeups in the league. Among all starting pitchers and relievers, it ranks second in total run value behind only the wizardry that is 2020 NL Rookie of the Year Devin Williams’ changeup. On a per-100 pitch rate, Peralta’s is even better than Williams’.

It’s all the more clear why the Yankees advised Peralta to change it up a bit more. His four-seam and slider have always been average offerings. When you have a 100th-percentile pitch, you need to throw it as much as you can and use your other pitches to compliment it. Hence the increase in sinker usage despite that pitch being an average one as well.

Peralta uses the sinker so frequently now because it spins in just about the same direction as his changeup. Using it at a 30-percent clip allows him to throw hitters off the changeup just enough to optimize deception between both offerings.

In terms of command, Peralta has thrown them in ideal zones relative to one another since the month began. The first image below is the sinker; then, the changeup: 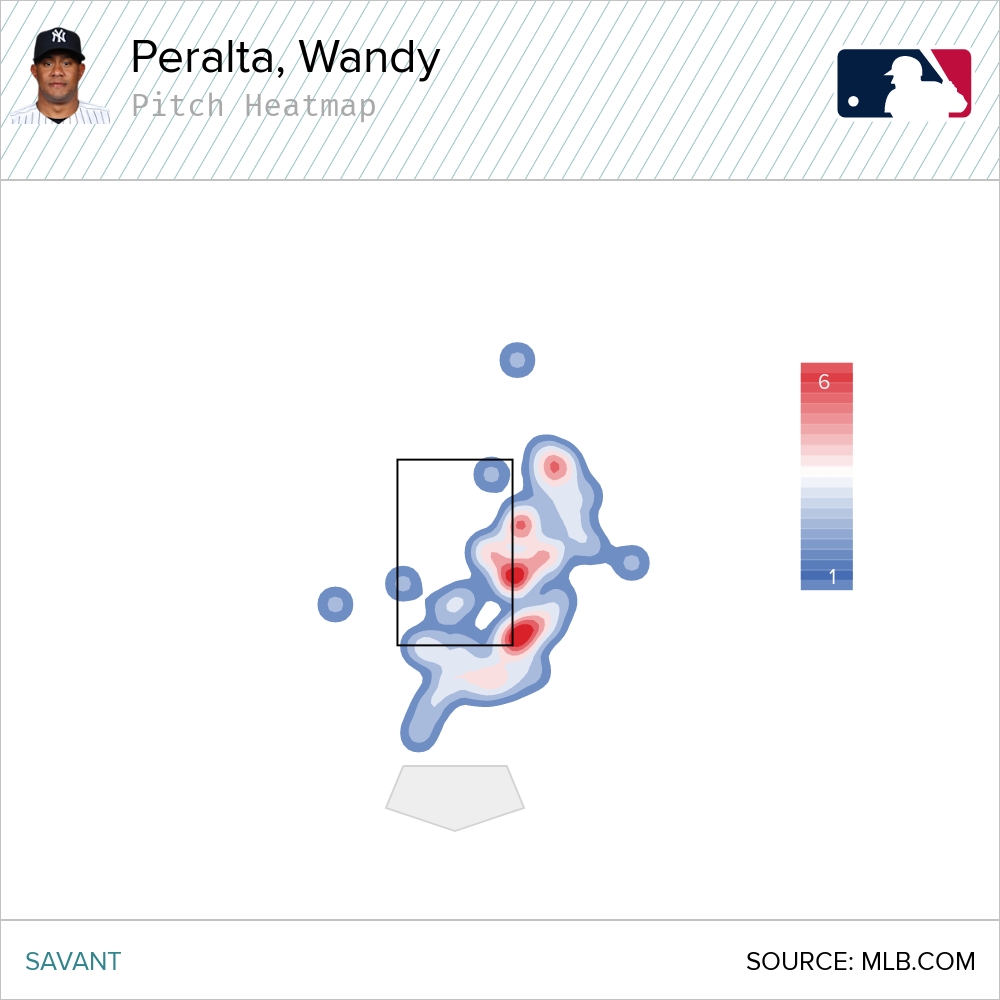 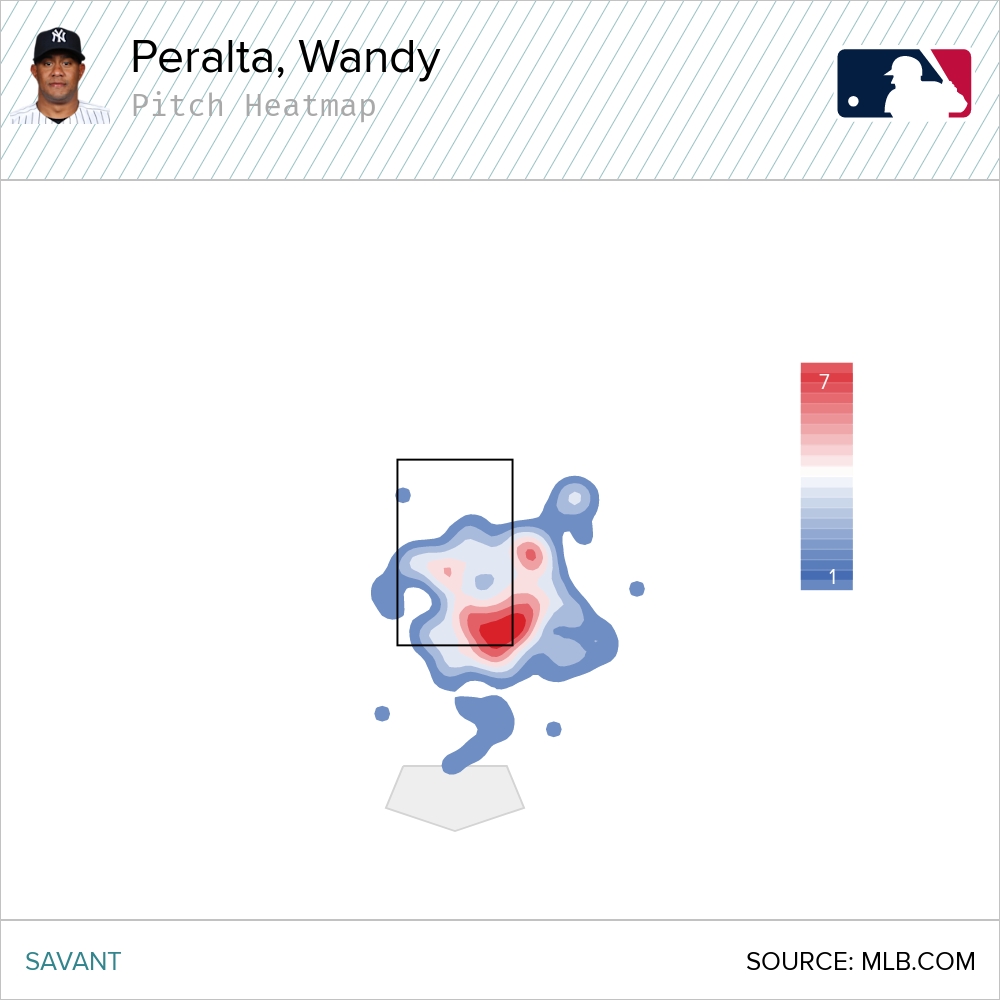 The sinker runs slightly inside to lefties and tends to be located a bit higher. With seven miles per hour of velocity separation, this strategy has worked quite well. If Peralta can consistently locate the sinker just above the changeup, he will be able to sustain his two-pitch mix. The Yankees’ bullpen has clearly proven that if a pitcher has one elite pitch, then he should do what they can to set up that pitch. If that means using only one other pitch, then so be it.

It’s been thrilling to watch Peralta in August, too. There comes a moment when you can see the confidence come to a pitcher. All month, he has been used in high-leverage situations and has come out on the better side of them every single time. He’s been reliable enough to pitch in multi-inning relief roles against the Mariners, White Sox, Red Sox, and Twins too. With the Yankees losing Zack Britton for what looks like the rest of the season, Peralta’s rise has come at the perfect time.

Wandy Peralta gets the save with the bases loaded and the Yankees defeat the Braves 5-4, winning number 1️⃣1️⃣ in a row!!! pic.twitter.com/ZMbaqNBwNO

The 30-year-old lefty has gone has transformed himself from the role of an average middle reliever to someone capable of bailing out Aroldis Chapman and clinching series victories for the Yanks. I’d get this hyped too!

Peralta’s game-clinching appearance against Atlanta and Freddie Freeman was a perfect example of the reliever he has become. He threw the reigning NL MVP five straight changeups, all coming in a three-ball count. That’s confidence.

I must once again tip my cap to what the Yankees have done with their reliever acquisitions this season. When the Yankees acquired Peralta for Mike Tauchman, I’ll admit that I was confused. But this month has demonstrated his value. Peralta is capable of being a shutdown reliever and is proving it right in front of us.