The game was going fine for eight and a half innings, before all hell broke loose in the ninth.

In a way, this felt like the opposite side of games the Yankees lost early in the season. The Yankees played good, solid baseball, scoring runs with home runs and a clutch single or two, took advantage of their opponent’s mistakes on the basepaths, and if it weren’t for Aroldis Chapman, this game wouldn’t have been as stressful as it was. Still, all wins count, and the Yankees came away with a 5-4 win over Atlanta.

We had a pretty good back-and-forth early. Andrew Heaney retired the first two batters he faced on just three pitches, before Freddie Freeman worked a walk — aided by a rather generous 3-2 call from home plate umpire Chris Conroy. Austin Riley was hit by a pitch, and then Heaney laid an egg on 0-2 that Dansby Swanson doubled off of, giving Atlanta a 2-0 lead.

But as I said, good back-and-forth, because the first batter of the second inning was Giancarlo Stanton:

Eight batters then struck out consecutively, which isn’t a record but I’m also not sure I’ve ever seen it happen in a game I’m watching before. The Yankees went down in order the next two innings before Aaron Judge led off the fourth with a double, and two batters later Gary Sánchez brought him in with an RBI single.

Heaney, overall, did fine. He couldn’t recover from a bad call in the first, but outside of that kept the Yankees in the game. Just like against Boston, being able to elevate his fastball served him well: 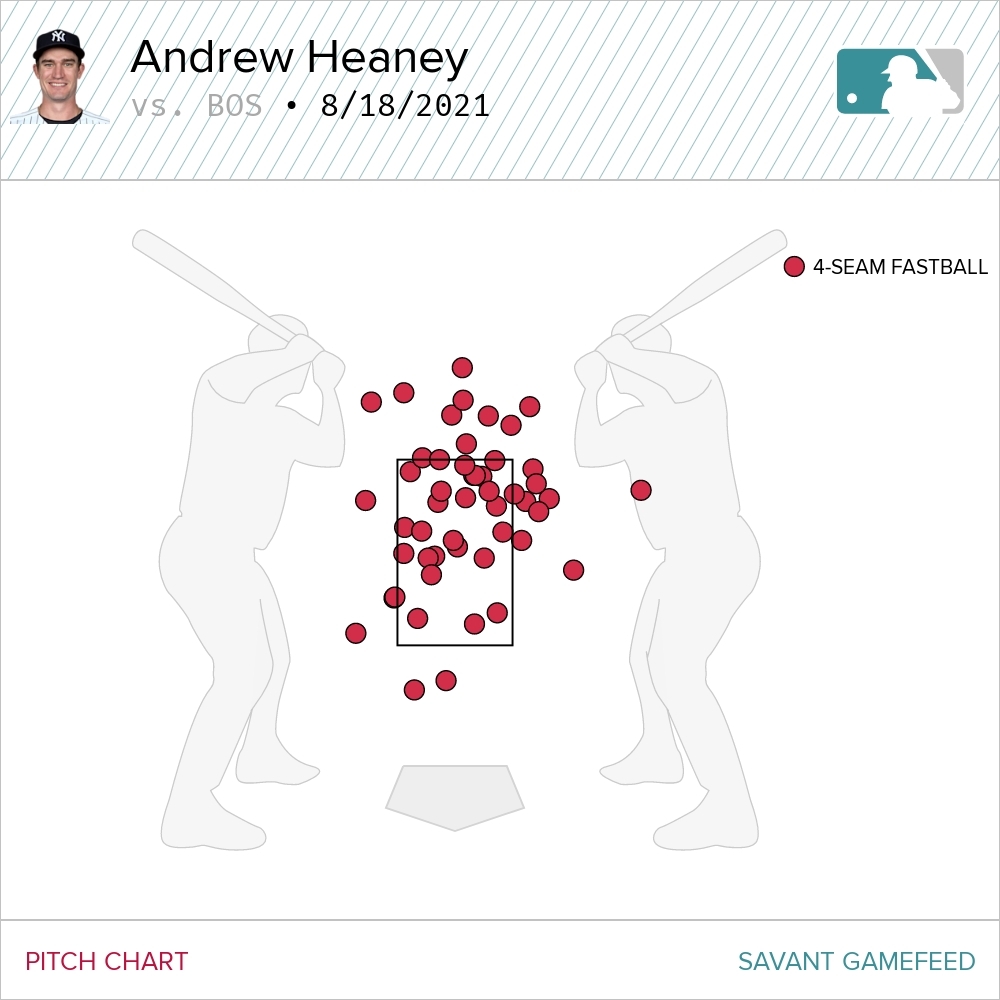 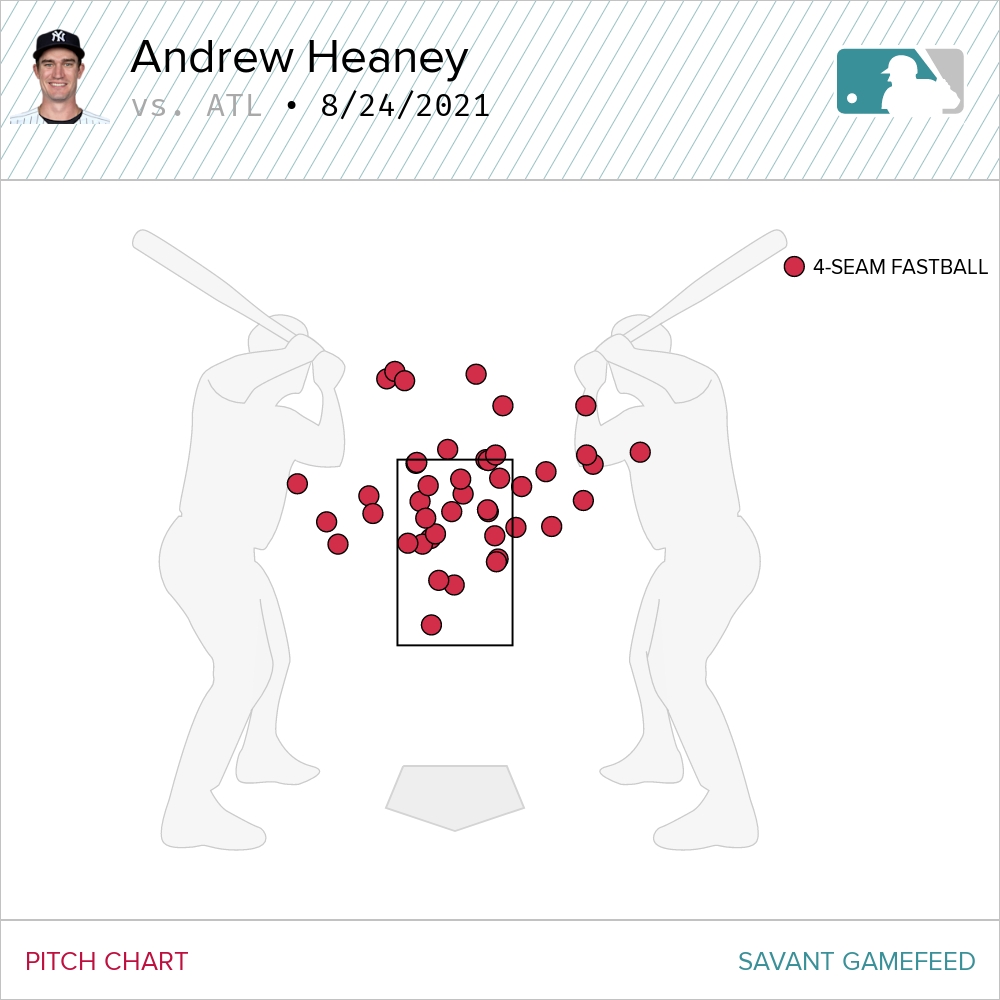 His command wasn’t quite as good this time around — you can see that his fastball was moving much more east-west than it was against Boston. Still, it’s clear the Yankees are trying to get him to work above the letters more than he was in Anaheim, and while I still don’t love the idea of Heaney pitching every fifth day, the last two games have bolstered my confidence just a bit.

Heaney did only throw four innings, being switched out for Brett Gardner in the top of the fifth, as we went back to the back-and-forth action we’d seen earlier in the game. Gardner lined out hard to left field, but DJ LeMahieu didn’t:

DJ LeMahieu breaks the deadlock in ATL with a 2-run shot!

Albert Abreu couldn’t hold it down in the bottom half, giving up a single and a walk in his first three batters, ceding the mound to Joely Rodríguez. J-Rod gave up a big hit that scored a run, although a great relay from Andrew Velazquez nailed Freddie Freeman at the plate, saving the lead:

Freddie Freeman is called out at home and the call is confirmed after review. The relay throw from Andrew Velazquez to Gary Sánchez allows the Yankees to keep a 4-3 lead. #YANKSonYES pic.twitter.com/lH1HzBNhZJ

The play was reviewed, and....it’s definitely close. But I’ll take that call being upheld. With a one-run lead, Rougned Odor was kind enough to give the Yankees some insurance, belting a solo home run into the second deck in right.

Outside of Abreu, the bullpen was typically excellent. Once Abreu departed, the relief corps combined for 3.2 shutout innings, three hits, no walks and a trio of strikeouts. Aroldis Chapman ended that nice run in the ninth inning making everything too dramatic. Adam Duvall reached on a single, and Chapman seemed afraid of his fastball. He threw four sliders in six pitches to notch a strikeout, but then walked Ehire Adrianza on four fastballs that were nowhere close.

A single from Ozzie Albies — where he only saw one fastball, high and away — should have been the final out of the game, but Rougned Odor, playing out of position, took far too long to deliver the throw to first. Chapman then walked Jorge Soler, throwing five sliders in six pitches, to make it a 5-4 game. Wandy Peralta was called in to actually close the game, and he did, but Chapman’s fastball problems are such a big part of the late-game issues for this team. It’s easy to say “just rear back and throw it! Trust your fastball!” but he’s not even close to the zone:

He can’t trust his fastball because he has no idea where it’s going.

The Chapman Question is going to be on our minds for the rest of the season. At any rate, the Yankees did win this one, keeping pace with the Rays, and will take tomorrow off before heading out West for a series with potential Wild Card Game opponents, the Oakland As.