By keeping his front side locked, he’s unlocked much better command of his pitches as the season’s gone on.

In a season with an uneven rotation, Jameson Taillon has come along and provided a certain level of stability in his first season after Tommy John surgery. He struggled in the opening months of the campaign, being one of the absolute worst starting pitchers in baseball, but since June 1st has found himself 12th in baseball in ERA and top 30 by fWAR, solidly among the good-but-not-ace level of pitcher. Critically, he’s averaging more than five and a half innings per start over that stretch, which both takes weight off a stressed bullpen, and reflects that he’s rebuilding the strength and stamina that having two different TJS saps from you. Pairing that with a returning Gerrit Cole gives the Yankees a much better 1-2 punch than we might have expected back in March.

One of the supposed keys to Taillon’s season was going to be his rebuilt mechanics, which I wrote about back in March. Both his 2020 rehab and the 2021 offseason were geared toward taking as much stress off his twice-repaired elbow as possible, incorporating more drive with his lower half and transferring rotation from his elbow to his shoulder with a new, shorter arm delivery.

This is how he looked in spring:

And this was a pitch of his on May 1st, against the Tigers:

They look the same! That’s a positive, a consistent delivery is obviously the foundation to pitching success. But there is a slight difference between his delivery early in the year, when he was struggling to command pitches in the zone, and this most recent iteration of Taillon, and I want to see if you can pick up on it:

It’s a subtle thing, but if we screencap the delivery at the same point... 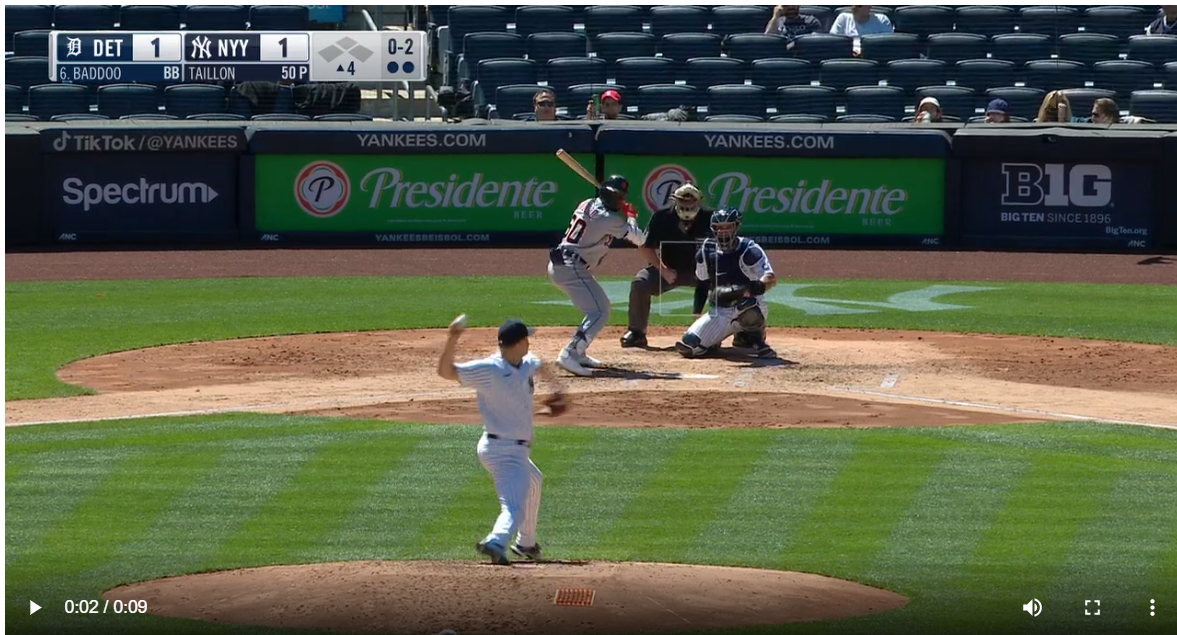 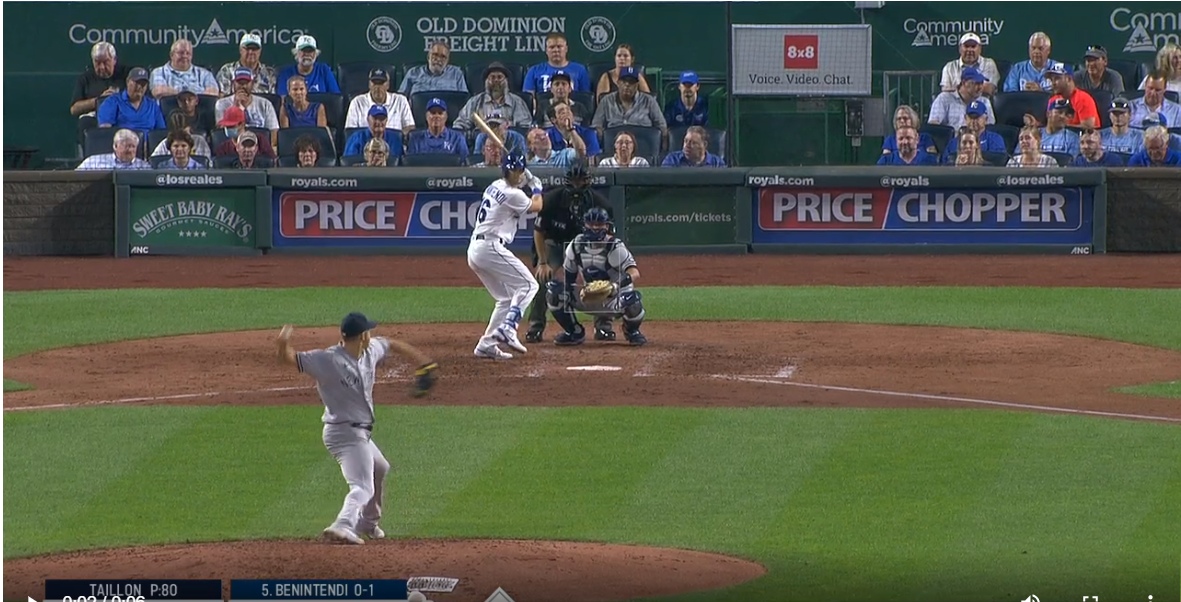 Taillon’s left hip is opening just a hair earlier against the Tigers — look at his belt, and the way his plant foot is already pivoting. This opening is going to rush the rotation of his shoulder, pulling his arm forward early, causing him to leak the ball armside.

Against the Royals, that hip stays locked closed until the last moment, keeping his arm back. Not only does this make his pitch more deceptive, since the hand is hidden a fraction of a second longer, but because his arm isn’t rotating early, he’s going to have much more control over his gloveside movement.

And it’s not just one pitch, take a look at the same point in delivery to a right handed hitter: 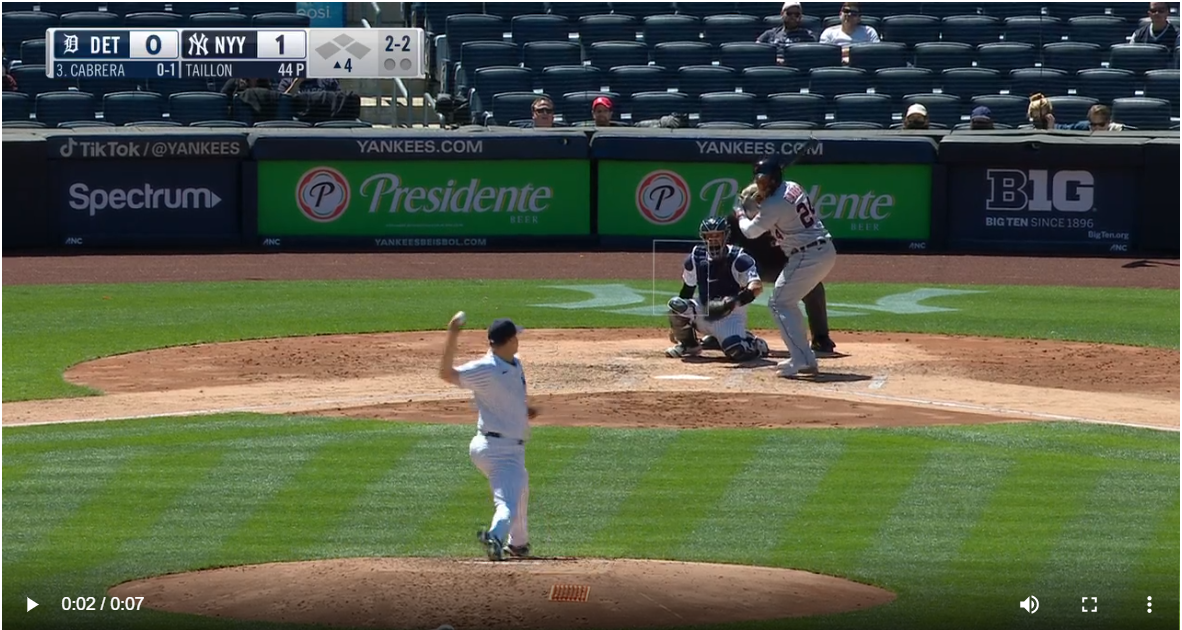 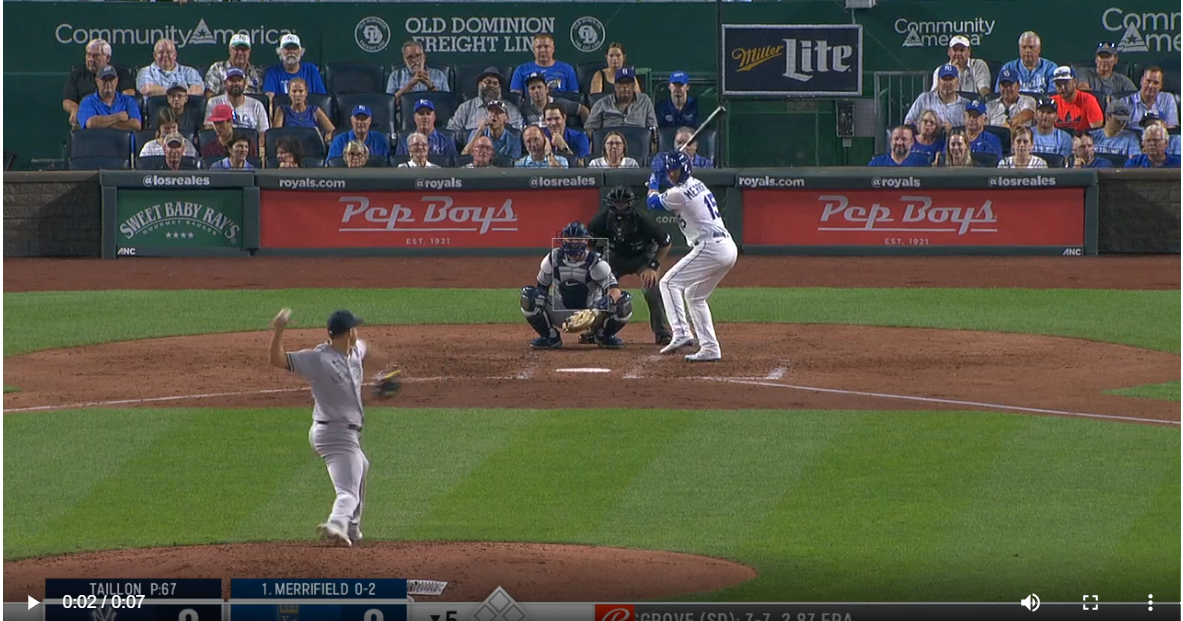 This time, you can actually see Taillon’s belt buckle mid-delivery to Whit Merrifield, keeping that hip locked back and everything timed perfectly. Against Miguel Cabrera in May, his hip is opening early again. I’m not going to post the gif, but the result is the same: he misses Gary Sanchez’s target by a good five inches armside. Miggy swings through it for the strikeout, but we’re talking process, not results.

However, seeing as results do matter, take a look at Taillon’s pitch location, as he’s settled down that front hip and experienced much more command of gloveside movement: 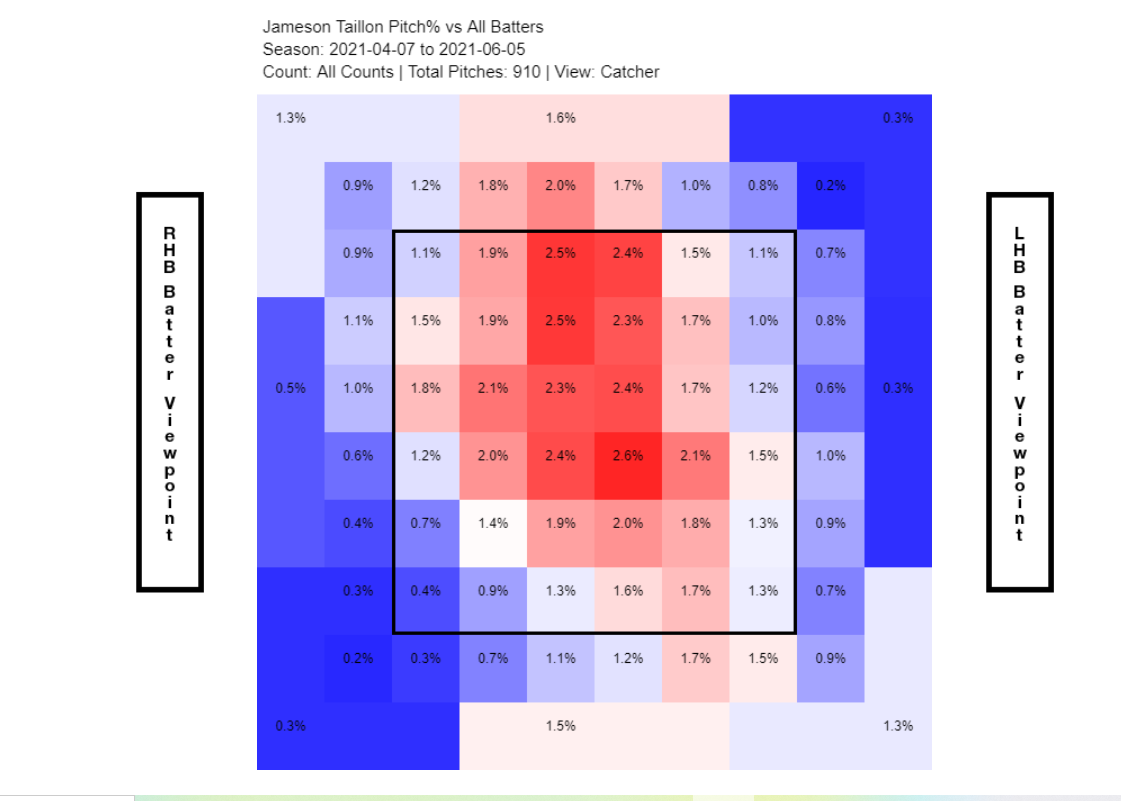 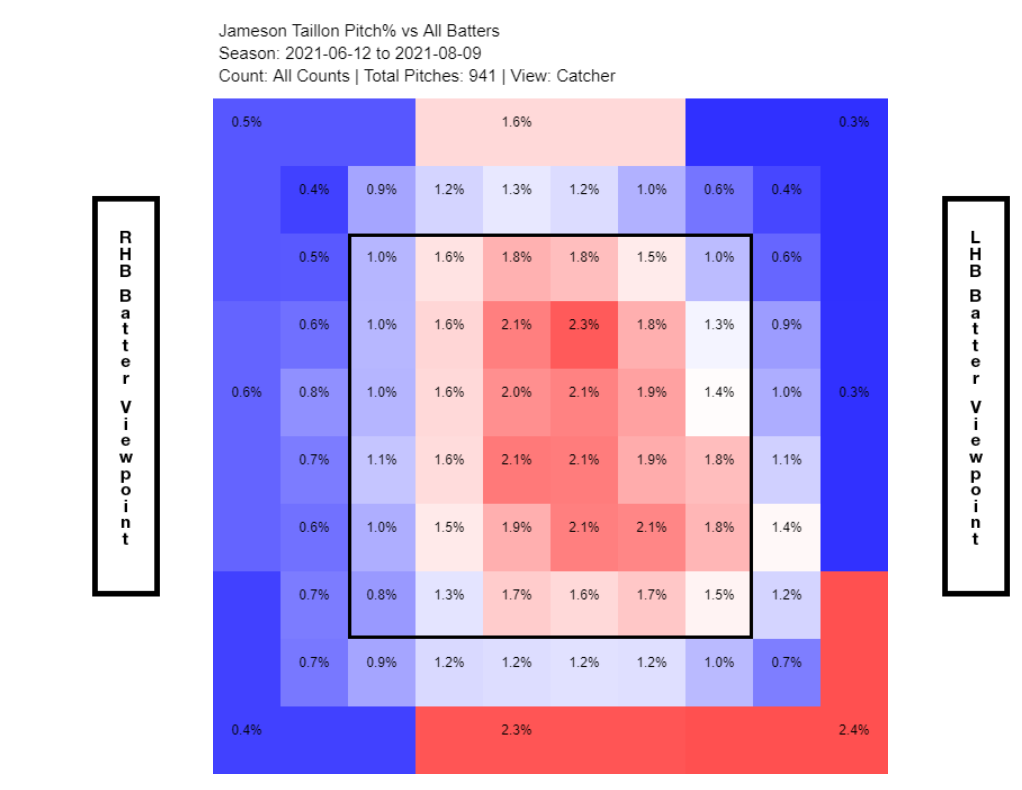 Once again, much better command of gloveside locations. He’s been able to bear in on lefties, and drag the ball away from righties, and although he has seen a decrease in strikeouts from April and May, he’s also walking fewer guys and beginning to show signs of contact control — because of the way he’s able to pull the ball gloveside against righties, he’s able to engineer swings that reach for the pitch, which is going to create softer contact.

As well, I’ve yelled a lot about his early inability to command the top of the strike zone, especially with his fastball. Too often he was leaving four-seamers at the belt-to-diaphragm part of the zone where every major league hitter can take you deep. A tighter, locked delivery has given him much better command in the middle of the zone as well, and sure enough, his HR/9 is half of what it was in April and May.

What’s left to question is whether this was a conscious fix or something that came along with more reps. I wouldn’t put it past Matt Blake and company to notice the early opening of the hips, but I also think it’s entirely possible that’s something that naturally gets optimized as a pitcher goes from 2000 repetitions of his delivery to 5000. So much of Taillon’s career is consumed by injury rehab, that it’s hard to isolate where the manual rebuild of his delivery ends and the almost-unconscious adjustments pro athletes can make begins.

Regardless, there’s a lot of reasons to be optimistic about Taillon in 2021 and 2022. He’s maintained that short arm delivery, transferring force from the elbow — scary! — to his shoulder and legs — no more scary than any other pitcher! By adjusting to keep that front hip locked, he’s developed much better command, to add to his increased use of the curveball and two-seam fastball. Is he a 2.10 ERA pitcher at true talent? Probably not, but this version of Taillon as the number two or three in a rotation headlined by Gerrit Cole is nothing to sneer at.