The Yankees can dream on Albert Abreu again

It looked like his time had come and gone. But now, Albert Abreu is reminding us all why he was such a highly-regarded prospect

Share All sharing options for: The Yankees can dream on Albert Abreu again

Over the last half-decade or so, the Yankees have developed a handful of high-octane arms on the farm. Nowadays, it seems like every MLB reliever and their mother can touch triple digits, and the Yankees have done well to keep pace. Some of these pitchers have graduated to the majors, while others have fizzled out, but today we will focus on one who is still in limbo.

Last week, Dan wrote about Albert Abreu’s graduation from Yankees prospect lists. He detailed how Abreu has sat near the top of the club’s pitching prospect rankings ever since he came over from Houston in the 2016 Brian McCann trade. Five years late, it seems he has finally made the jump to a real big league pitcher.

That said, there is still a ways to go before he cements his place on the roster. He is always one of the first to be optioned down to Triple-A when a regular returns from the IL. He hasn’t quite gained the trust to be a mainstay in the Bombers’ bullpen. However, there are some adjustments he has made this season that could be the keys to sticking in the majors.

Following his August 6 outing against the Mariners, Abreu explained some of the alterations he’s made. He tweaked his arsenal — ditching the curve while adding a sinker — and modified the grip on several of his pitches so the ball feels more comfortable in his hand. Let’s dig into these adjustments and see if they’ve paid off.

Starting with his pitch mix, Abreu has indeed only thrown one curveball this year, and even that pitch may have been a miscategorized slider. As for the sinker, it appears to have displaced the four-seamer as Abreu’s go-to fastball. He’s throwing the sinker 28.7 percent of the time and the four-seamer only 17.2, whereas last year he threw the four-seamer over half the time.

As it should, the sinker is inducing a -18 degree average launch angle and a groundball on over three-quarters of balls in play, though Abreu could stand to sharpen his precision with the pitch. It’s interesting that sinker usage is up across almost the entire Yankees pitching staff, something I hope to dive into soon.

Next, let’s turn to the physical adjustments. Full disclosure, I can neither confirm nor deny any grip adjustments because the publicly-available footage has limited resolution. I can say, however, that I may have spotted two other minor mechanical adjustments

The first is with the fastball:

It happens in a split-second, but it appears Abreu is keeping his front side closed in 2021 (right clip) just a fraction longer than in 2020 (left clip). Additionally, he seems to have altered his arm path. Instead of pulling across his body, Abreu seems to be pulling down toward his left hip. In conjunction, these two changes help prevent him from flying open. Fastball command was always a major hurdle for Abreu. Now, he is no longer seeing the fastball sail armside as often, which has done wonders in taming his wildness. 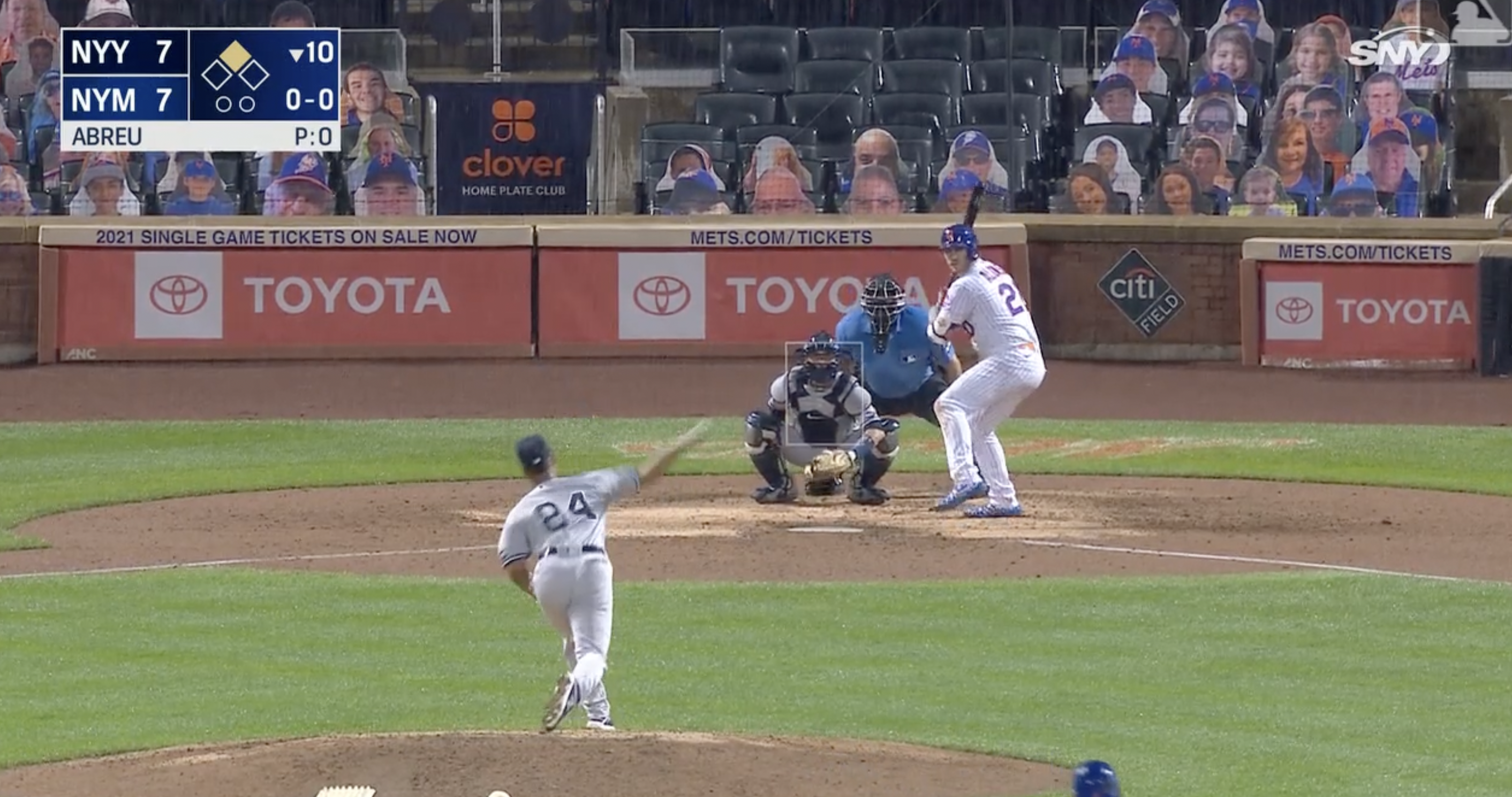 You can also see from this freeze frame that Abreu has raised his arm slot just a tad. Using the face of a clock, Abreu has shifted from a 1:45 delivery to a 1:30 delivery. This allows him to stay on top of the baseball, giving him a further boost in control.

The other mechanical adjustment I may have spied is on his slider:

In the left clip from 2020, Abreu appears to pull up short a tad as if recoiling a bit on the followthrough. Contrast that with the right clip from 2021, where it seems that he is fully finishing his throw motion. 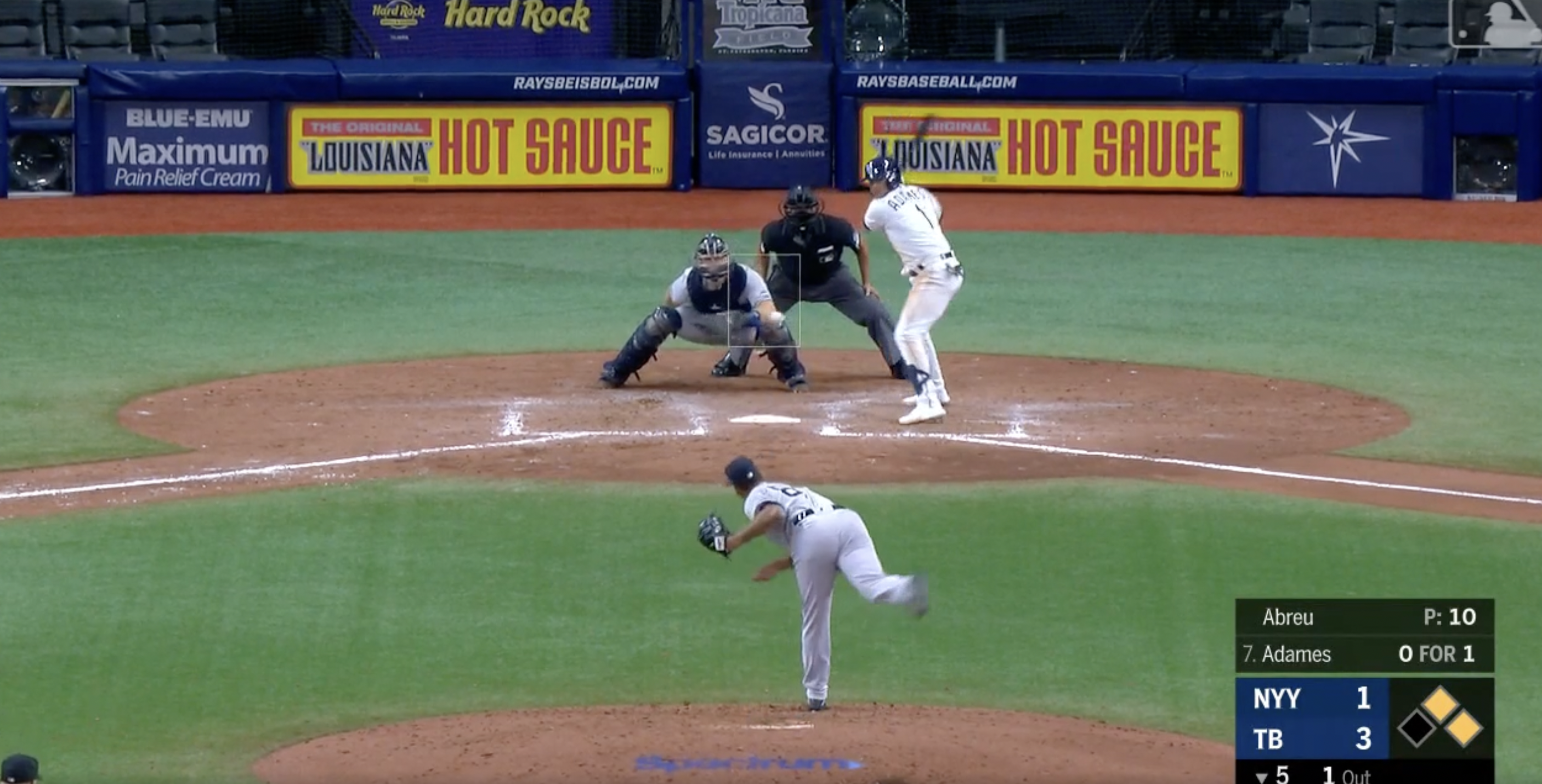 With the delivery of the slider, you typically want to finish out in front, so this effort by Abreu to really finish his throwing motion could lead to better consistency.

The issue with Abreu was always going to be command. It’s still a work in progress — he has walked 12.1 percent of batters this season. Still, now that he has been given concrete mechanical adjustments and has a repertoire he feels comfortable with, it could be just about time for him to break out.

Abreu reminds me of Jonathan Loáisiga in some ways. Both were highly-regarded prospects with overpowering raw stuff. Loáisiga turned to the sinker this year, as well as ironed out his secondary pitches, and he’s only gone and become one of the best relievers in baseball. With Abreu making similar adjustments to his game, it’s easy to dream on him becoming the next homegrown high-leverage reliever.