The Professor could be on the move at the deadline, and the Yankees should be interested

The Chicago Cubs are open for business. Dealing away Joc Pederson last week, and stirring rumors of potentially trading Kris Bryant and Anthony Rizzo have made it clear that the club is looking at a significant rebuild. The problem with all three of those guys is that they’re rentals, and position player rentals at that — not always the players that generate the biggest returns. The players that do? Controllable pitching.

I wrote about Kyle Hendricks over the winter, when the first signs of a North Side rebuild were showing themselves. He’s now under control for two and a half seasons, not three, slightly lowering his acquisition price, but still not putting much pressure on Cubs president Jed Hoyer to deal him. However, if they’ll listen, there are few pitchers that would be a better addition to the Yankee rotation.

Hendricks isn’t a number one, to be sure, but his 3.65 ERA would slot him in third in the Yankee rotation behind Gerrit Cole and Corey Kluber, and in fairness, we don’t really know what the recovering Kluber will contribute to the club for the rest of 2021. Of course, there’s more to pitching than just ERA, and you’d be forgiven for raising your eyebrows at Hendricks’ more advanced metrics:

Like a lot of finesse pitchers, Hendricks has made a career out of overperforming underlying metrics like FIP. Since FIP relies so much on the presumed “controllable” elements of pitching, it does underrate guys who can consistently produce soft contact, the kind of batted balls that are fairly reliably converted to outs.

However, there’s one problem with saying, “Well, Hendricks always outperforms FIP, because he generates soft contact so well” — xERA factors in quality of contact. From 2015-2020, Hendricks was among the 25 best starters in the game by xERA, in a similar league as Aaron Nola and Jack Flaherty. He doesn’t have gaudy strikeout numbers, but so many of his plate appearances end in popups, soft fly balls, or 85-mph ground balls that in front of a strong defense, those balls are turned into outs. Since the Cubs have been the best defense in baseball by DRS during that timespan, Hendricks has excelled.

This year, that hasn’t happened to the same degree, largely because hitters have been able to barrel Hendricks up much more often than any other season. His 2021 barrel rate of 9.2 percent is a career-high (the previous being just 5.7 percent), and when you pair that with a decline in strikeout rate, and particularly a decline in whiffs on his two best pitches — the curve and changeup — it’s fair to say that Kyle Hendricks may not be as deceptive as he used to be.

Or, it could also be fair to say that Hendricks was the victim of a truly terrible April, and that outlier month is dragging his stats: 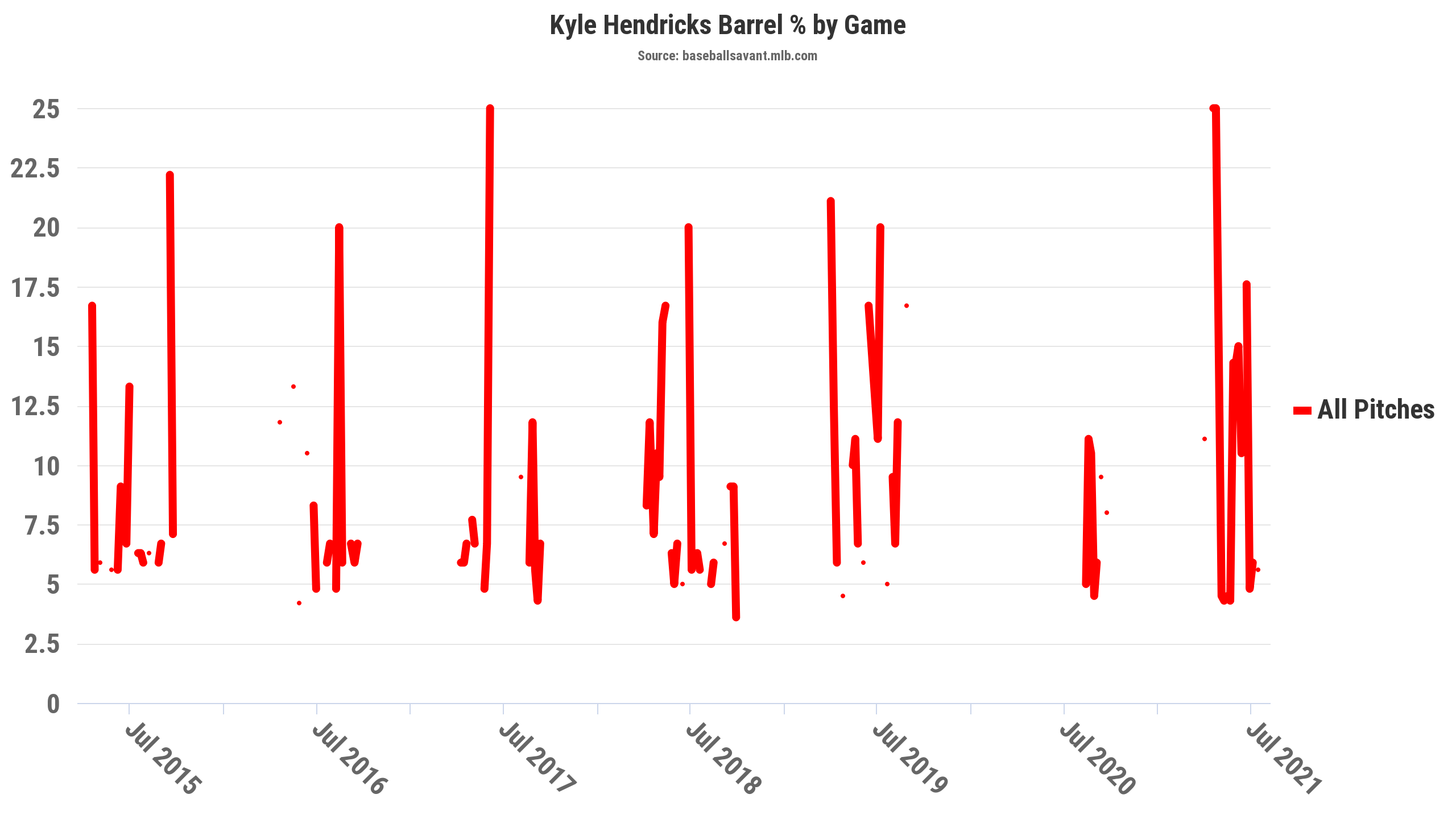 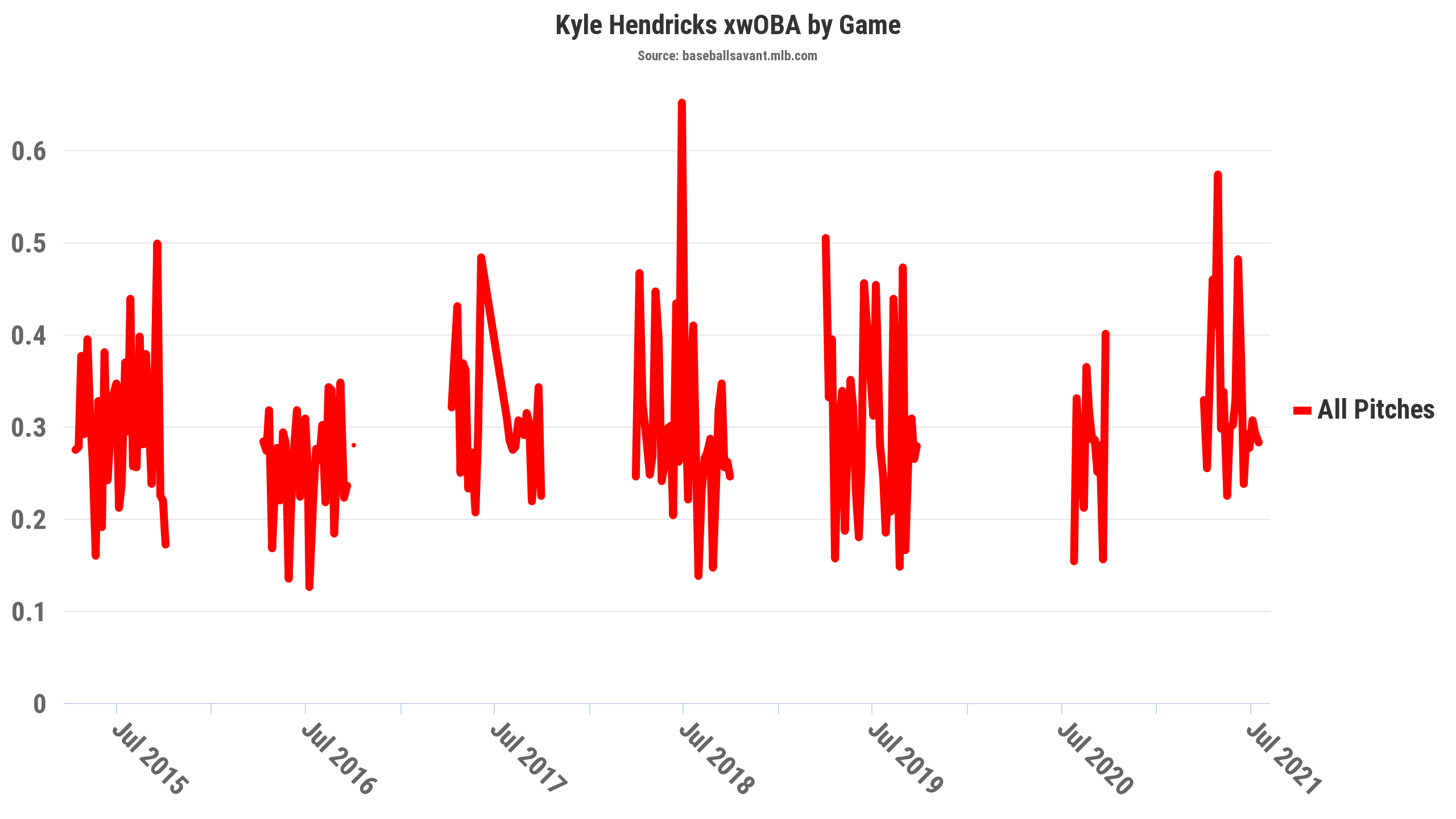 In fact, April 2021 was just about the worst month of Hendricks’ career by these two key metrics that drive xERA, barrel rate and xwOBA. After April, he looks much more in line with his career norms.

So I think you can be cautiously optimistic about Hendricks’ performance in 2021. Yes, it’s not the legitimate “soft ace” type of pitching we’ve seen, but he had a bad month and has turned it around, not unlike Gerrit Cole after a dreadful June. Just to drive this point home, he pitched 6.1 innings of 2-run ball last night against the Cardinals.

Then, of course, there’s the contract. Hendricks is owed $13.9 million per year until the end of 2023. For the sharp-eyed among you, that’s less than $3 million more than the Yankees are paying Kluber for this season, despite The Professor throwing 279.1 innings more than Klubot since the start of 2019. Funny, that.

BaseballTradeValues has Hendricks at negative surplus value, which I think is a little uncharitable, given his performance this season and the perennial, league-wide need for good starting pitching. If the Cubs are serious about a rebuild, then they would get the biggest package for Hendricks out of almost any piece on their roster, and if the deadline price isn’t up to their standards, they can wait until the winter or next year’s deadline and still deal him with two potential playoff runs embedded in his contract.

But of course for the Yankees, the very same things are true. If they trade for Hendricks, and he’s not enough to pull them out of the hole in the division they find themselves in, they get two more chances, in his age-32 and 33 seasons, to squeeze value out. Like Joey Gallo, he’d represent an upgrade not just over the 2021 roster, but fill a hole on the 2022 side as well, and that’s worth ponying up a little more than just a rental deal.