If the Yankees are to add a pitcher, they might need look no further than their most recent opponents.

Not at all unlike the Yankees, the Los Angeles Angels are a team built around a couple of immovable parts. The Angels — the team with the sixth-highest payroll in baseball — have committed more than half of a billion dollars to Mike Trout and Anthony Rendon, with a likely mega-payday headed Shohei Ohtani’s way in a couple of years. Similarly, the Yankees have committed to spreading more than a half-billion across the likes of Giancarlo Stanton, DJ LeMahieu, and Gerrit Cole. Still, in two years, they’ll have to make a decision as to whether Aaron Judge will become a fourth massively expensive piece of the franchise’s future.

Unfortunately for the Angels, the biggest dissimilarity between the clubs is in the collection of parts that surround their main trio. In short, they’re not very good, and they’ve played even worse than that this season. They’re the reason that the Angels are eight games out of the playoffs, and that the best player of his generation has played in a single playoff series over the course of his career to date.

That gap between the two teams, however, isn’t as big as the Yankees would like it to be. Barring a “fall like a stone,” the Yankees may look to augment their current squad before the July 30th trade deadline. With Trout out for at least a couple more weeks, the Angels don’t have more than a puncher’s chance of jumping five teams to earn a Wild Card spot. In all likelihood, the Angels will enter the deadline as sellers.

Of their available wares, the Angels have a trio of pitchers on expiring deals that could potentially interest the Yankees, if the Bombers decide to add an arm. While the Yankees might need more help in the field and at the plate than on the mound, it’s not like they’re working with an abundance of pitching talent, and it can never hurt to have more pitching. If the Yankees and Angels find that their interests do align, it’ll likely be over a deal involving at least one of Dylan Bundy, Andrew Heaney, and Raisel Iglesias.

All making between six and ten million dollars this season, the Yankees would have to be willing to go into the tax or send out enough salary to take on less than about three million more than they owe now. As of now, it seems unlikely that the Yankees would double down on a team that continues to limp towards the deadline, but if they’re set on cashing in on Frazier, Gardner, and/or prospects, they could hypothetically make something work.

Bundy entered the 2021 campaign as one of a handful of top-tier breakout candidates given his career-year in 2020 with awesome peripherals: 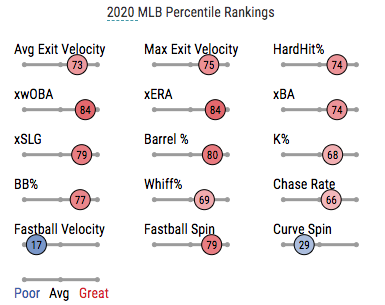 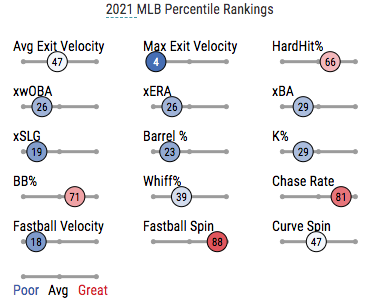 However, Bundy’s 2021 has been a dud so far, posting a bad-luck 6.79 ERA (4.67 xERA) with awful advanced stats across the board — bad enough to earn a recent demotion to the bullpen. Still, he’s a candidate for some positive regression this second half and could provide some back-end rotation help for a team that needs it.

Heaney has had a similarly disappointing season and, like Bundy, underperformed his xERA (4.40) by a full run (5.40 ERA). He too possesses a relatively slow, but high-spinning fastball. Unlike Bundy, Heaney wasn’t especially great last year with average peripherals and a 4.46 ERA, but he too has been decidedly worse. Bundy might have some upside considering the pedigree — he was the fourth overall pick in the 2011 MLB Draft — but neither appears to be a particularly appealing upgrade for the Yankees at this point in their respective careers. They can each eat some innings somewhere, but neither is likely to move the needle very far.

The third Angels pitcher conceivably worth targeting in a trade, Iglesias hasn’t performed up to the lofty standards he’s quietly set for himself over his seven-year career, but the advanced data and eye test tell the story of a downright filthy reliever. Despite his 3.74 ERA, mediocre for an elite-level closer, Iglesias has struck out more than 14 batters per nine innings pitched, the best mark of his career, and currently sports his best walk rate ever, allowing fewer than two free passes per nine. At a glance, his bright red Baseball Savant page gives some quick insight into just how nasty his stuff is.

Iglesias’ slider-two-seam combo consistently baffles batters, something suddenly no Yankee pitcher — from Gerrit Cole to Aroldis Chapman — appears capable of doing recently. While he’d certainly provide a nice boost to the bullpen, as a nine million dollar rental, he might be a bit too rich for these Yanks.

If the Yankees’ implosions against the Red Sox and Angels don’t count for the kind of meltdown the front office and ownership need to see to tear it down, I don’t know what does. At this point, it makes little sense for the Yankees to splurge in the middle of this disastrous season, cutting into their ability to do so next offseason just to potentially miss the playoffs either way. However, if they do decide that pitching is what they want, the Angels have a handful of arms who at least merit consideration.