The Yankee shortstop was one of the game’s most promising young hitters as recently as a year ago — what has happened?

Share All sharing options for: Why can’t Gleyber Torres catch a barrel?

Gleyber Torres burst onto the scene in his age-21 rookie season in 2018 with 24 homers and an .820 OPS, making the All-Star Game and finishing third in the American League Rookie of the Year voting. The next season, he proved his success was no fluke, cranking 38 bombs with an .871 OPS leading to another All-Star Game and enough votes to merit a 17th-place MVP finish. While his defensive foibles hampered his overall value, his prowess at the plate was undeniable.

Then, last season, Gleyber’s power production fell off a cliff, as his 2019 .535 slugging plummeted all the way to a .368 mark, making him effectively a replacement level shortstop (0.0 2020 WAR). After a playoff resurgence sparked hope in the hearts of fans, we all wished that the stresses of a shortened pandemic season might have been the cause for Gleyber’s offensive woes. Instead, he’s followed up last season’s dud with marginally better defense, but the worst ISO and slugging percentage of his career, leading to a career-low .654 OPS. Right now, Torres has the sixth-worst slugging percentage in all of baseball — not exactly what you want from your supposed bat-first shortstop

Torres is hitting the ball as often as he has in the past, but with the least force of his entire career. Even in a down season, Gleyber matched his 2018 average exit velocity in 2020, a mark that has fallen almost three more mph to 85.9 this year, ranking him amongst baseball’s bottom six percent.

The quality of Torres’ contact has severely declined, with Gleyber hitting a greater percentage of his batted balls weakly than ever before. In fact, Torres’ weak contact rate, according to Baseball Savant, is almost double that of any previous season, while his topped rate is about five points higher than past seasons, and his under rate is five points lower than his career average. Instead of hitting the ball hard and in the air, Gleyber has hit the ball softer, and on the ground. 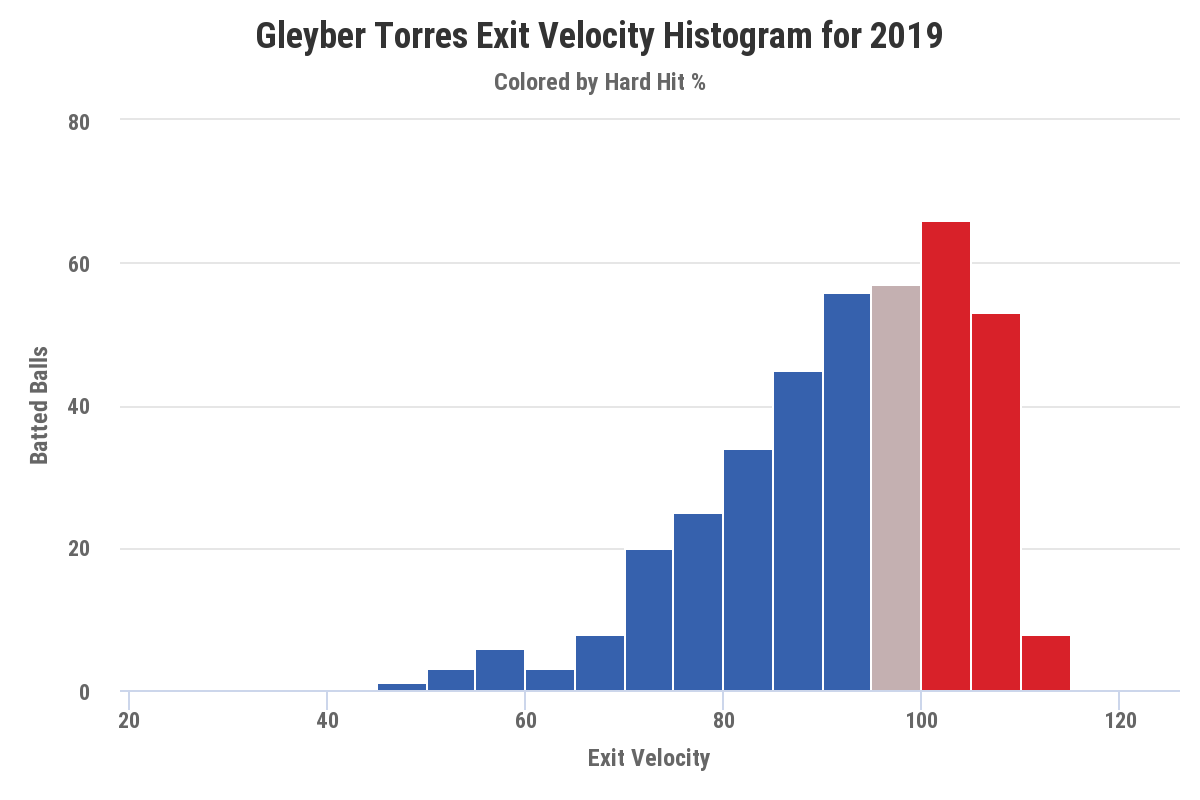 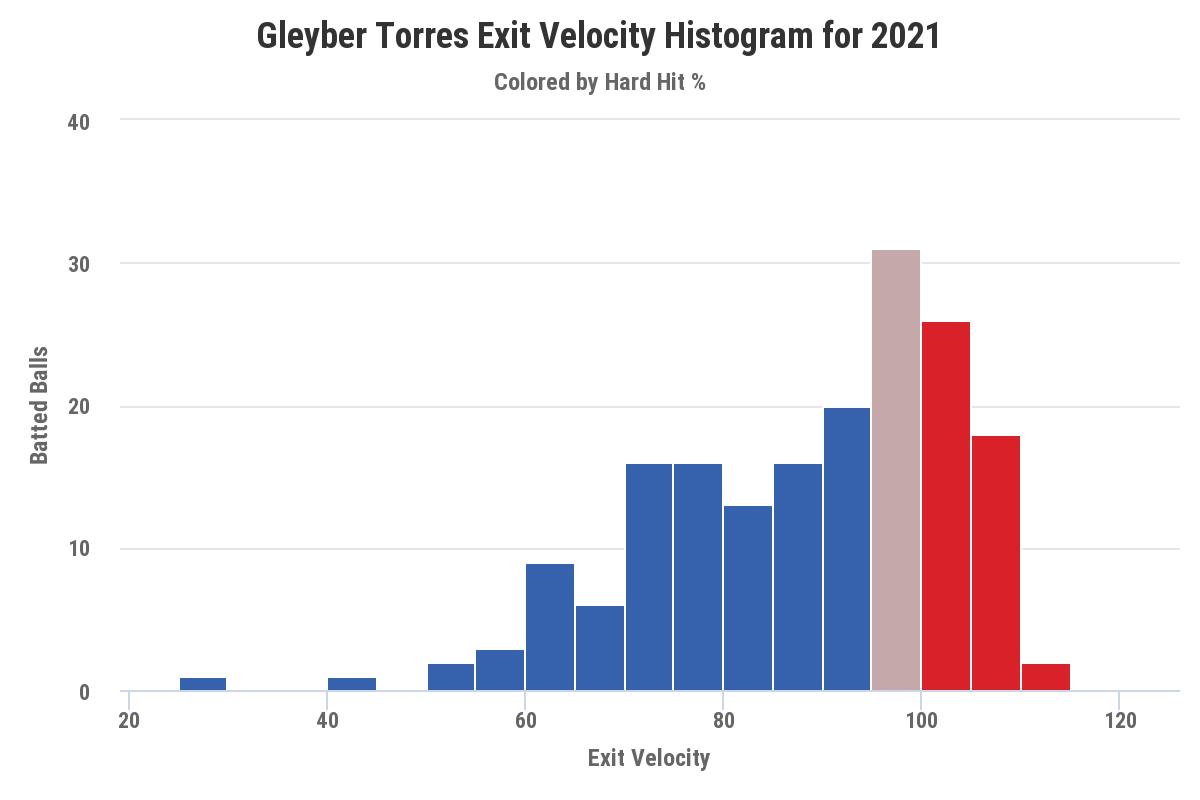 In the overlaid histograms of Gleyber’s 2019 and 2021 batted ball exit velocity distributions, Gleyber had a lot more contact in the low 90s, and a lot less in the 70-80 mph range.

In past seasons, Torres did an incredible job at getting his foot down early, turning smoothly, and staying long through the zone without leaking energy towards the third base dugout. In this 2019 homer, Torres gets his hips cleared before contact, launching this outside changeup 405 feet at 107.4 mph:

Even with his open stance, Gleyber keeps his energy directed back up the box — notice how you don’t see his left hip leak open before contact, which would likely cause the barrel to leak outside of his hands cut across the baseball, resulting in weaker flared or topped contact.

At times this year, Gleyber’s shown the ability to replicate the best swings of his past:

This Mother’s Day 2021 bomb looks a heck of a lot like the first swing from a couple years prior — Torres gets his hips through without leaking, mashing this 2-0 sinker 411 feet at 109.0 mph. Although Torres doesn’t get quite the same amount of side bend in the latter hack, it’s only because the pitch was on the inner-half of the dish, requiring less reach to square it up. In terms of the biomechanics involved in these swings, they’re the same, just geared towards two different locations.

Interestingly, despite the divergent results, these swings actually aren’t all that different from each other. The leg kick is the same, the balance is the same, and the approach to the ball is very similar to the prior pair. However, since his foot is down too late to catch up to this outside fastball, he subtly leaks energy by opening up his hip early in an attempt to quicken up his bat. This kind of misfiring, typical of those that have befallen Torres this year, seems to come from a lack of rhythm and recognition, causing haphazard, late adjustments rather than a loss of sound mechanics.

In fact, during last night’s game, Yankees Hitting Coach Marcus Thames described the recent work he’d done with Torres as having to do with his lower-half, and similar to that of what he had done with Gary Sánchez. Like when Gary was slumping, Gleyber’s swing is fine; it’s his timing that’s causing the problem.

Like Gary, Torres may want to reduce his leg kick to create a more repeatable timing mechanism. While it could be uncomfortable to institute at first, a lesser leg kick, or none at all, would ultimately make it easier for Torres to pick up the baseball more consistently, allowing him to put his A-plus swing on the ball with greater frequency. A Torres that can square up the ball would be a boon to a Yankee offense desperate for dependable production. Continued weak contact would leave the once franchise shortstop looking like a second-division starter.