Nothing has made me happier this season than Giancarlo Stanton’s start. Yankee fans haven’t had much to cheer for around Stanton’s Yankee tenure — largely due to the time he’s spent on the IL — but after such a great playoff run last season, all eyes were on Big G to start the year. He’s delivered over and over, and ended up being the hero in Sunday afternoon’s rubber match, sealing a series win for New York as they beat the Nationals 3-2.

Entering the bottom of the ninth, Tyler Wade — who had been subbed in for Miguel Andújar — was probably thinking about bunting his way aboard, but Brad Hand walked him on four straight pitches, none of which were close. For a lefty-on-lefty situation in that big of a spot, failing to even get a strike over is a pretty big deal. Hand really didn’t have much command at all, walking Wade and following that up with a free pass to Aaron Judge (pinch-hitting after getting most of Sunday off).

DJ LeMahieu, who before Stanton’s hot start would have been the guy you want up in that kind of moment, grounded into a fielder’s choice, with an old-school hard slide into second by Judge playing a pivotal role in breaking up what could have been a backbreaking double play. The combo of the slide and LeMahieu running hard down the line gave Stanton the chance to send a Mother’s Day crowd home happy:

Giancarlo Stanton with the walk-off to seal the WIN! #YANKSonYES pic.twitter.com/4eI0FX4FYb

Now, on to the rest of the game.

I find it really tough to evaluate Domingo Germán. His stuff doesn’t really impress me, and his fastballs certainly don’t impress MLB hitters. Today, for example, he induced just one whiff on each of the four-seam and sinker but struck out six against one walk. His strikeout of Victor Robles in the fifth really emblazons that:

Now, Robles isn’t a very good hitter, but Germán ignores his fastballs completely and dominates the plate appearance. When he works the changeup and curveball, he can locate both in the zone, and the movement — especially on the curveball — is good enough to fool batters.

Meanwhile, the two really loud pieces of hitting against Germán, a double from Josh Bell and homer from Kyle Schwarber, were on four-seams that don’t rise, and don’t give any margin for error: 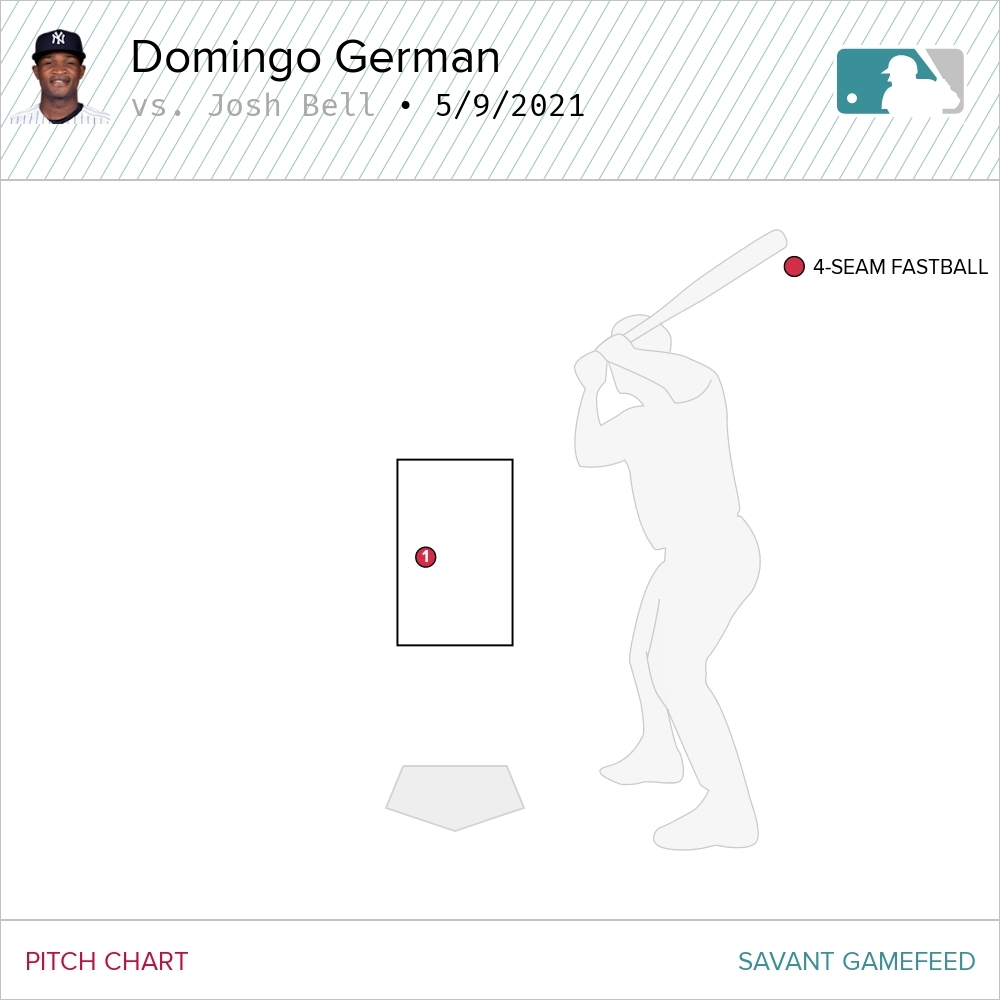 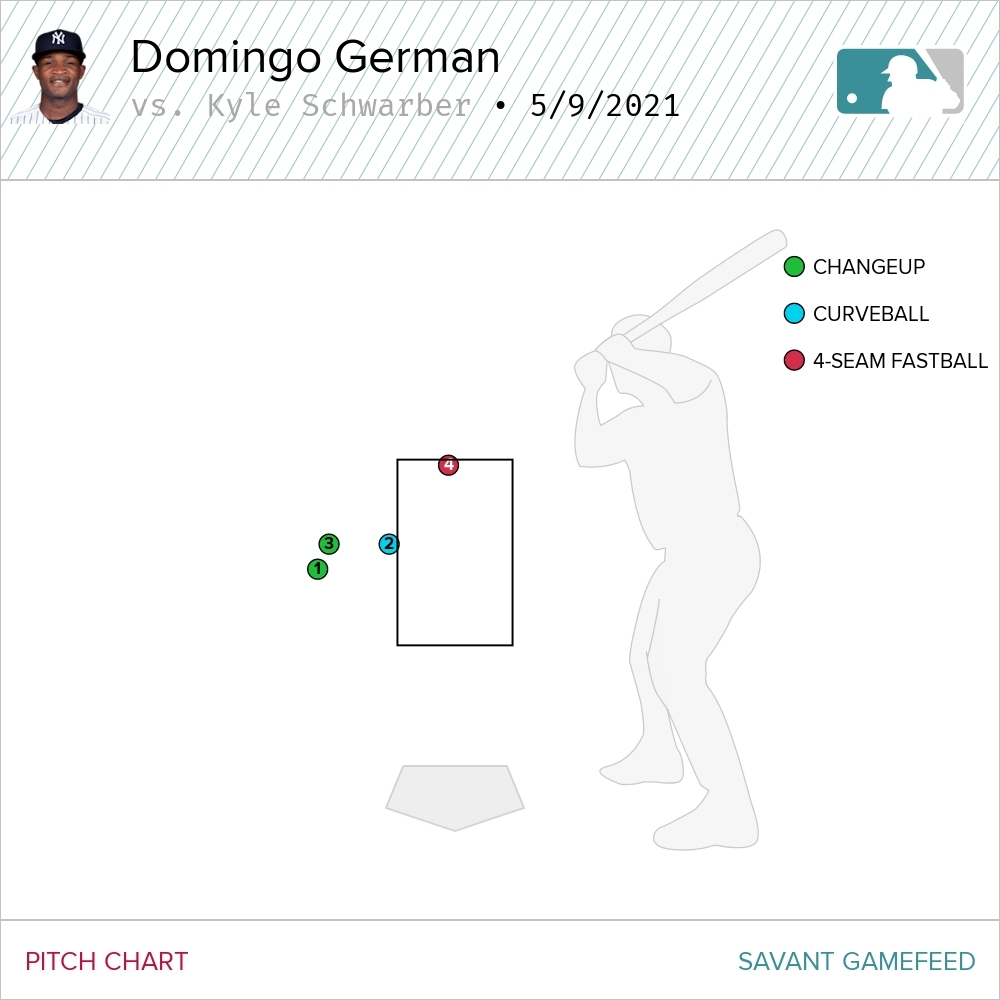 You can’t complain about Germán’s results today and I’m not going to. He worked well and left with the game tied. Going 6.1 innings and allowing a mere pair of runs isn’t anything to be upset about. I just think that as we project forward against better lineups than the Nationals’ stars-and-scrubs variety, not being able to fool hitters with fastballs makes Germán’s breaking and off-speed pitches less effective. But it worked today, and the Yankees won today, so that’s what counts.

Meanwhile, boy, watching Joe Ross is a slog. He seems largely uninterested in throwing the baseball, taking ages to deliver a pitch once men reach base, and it just made for largely unpleasant viewing. He walked four guys in the first three innings, including Stanton twice. The Yankees couldn’t make him pay until the third, where Aaron Hicks delivered:

Aaron Hicks rocks one out to right field for the RBI single!

Not to rag on him, but Ross really is a slowwww pitcher, to the point where the Yankees may have been a little drowsy. He walked his share of batters, but other than the Hicks RBI single, kept the club at bay for most of the game.

Of course, one of the dominant narratives of the year has been Gleyber Torres’ lack of power. He hit 38 home runs in 2019, just three in an abbreviated season last year, and hasn’t left the yard all year. It’s hard to tell a player’s state of mind, but you just know he was at least aware of the big goose egg in the dinger column, and in the bottom of the sixth, tossed that monkey off his back:

Gleyber Torres rips a missile over left field for his first home run of the season! #YANKSonYES pic.twitter.com/rloRucW7SP

After that, the Yankees went to sleep until the ninth, and after Schwarber’s home run tied it, offense in general paused as relief staffs did their job. Wandy Peralta worked a one-pitch popup to Juan Soto and Aroldis Chapman pitched yet another clean inning in his tremendous start to the season.

I’m glad the Yankees didn’t personally insult all of our mothers by losing this game, and I’m glad that this 7-2 homestand has significantly improved the outlook of the club. They take the day off tomorrow before returning to the hellmouth Tropicana Field for a three-game set with the Rays, starting Tuesday at 7:05pm Eastern.