What’s the reason behind the reversal of Hicks’s switch-hitting splits, and how can he get his season on track?

Share All sharing options for: On Aaron Hicks, switch-hitting splits, and... Barry Bonds?

Through the first three weeks of the season, the Yankees had one of the worst offenses in MLB. They were averaging less than 3.5 runs per game, with seemingly every member of the lineup mired in a slump. And perhaps no batter looked more lost at the plate than Aaron Hicks.

For much of the early going, Hicks batted third in the lineup because of the value the lefty component of his switch-hitting approach brought. Problem is, that lefty bat was, for the first time as a Yankee, a detriment at the top of the lineup. Prior to this season, he owned a 118 wRC+ batting lefty and 95 wRC+ batting righty in pinstripes. This year it’s 42 wRC+ left-handed vs. 164 wRC+ right-handed prior to yesterday’s ballgame. So what are the reasons behind Hicks’ slow start in general and this bizarre reversal of his splits batting lefty vs. righty?

First and foremost, his plate discipline has taken a step back. Hicks’ ability to draw walks has been his most lauded asset, yet this season he is walking at a ten percent clip compared to 13.6 percent for the rest of his Yankees career. Similarly, the strikeouts have ballooned to 23.6 percent compared with 20.1 percent over the aforementioned time frame. When he makes contact, it is also in a far less efficient manner. He is getting underneath the ball at a 35.2 percent rate, leading to a 15.5 percent popup rate, both career-worsts.

Moving on to the issues batting lefty, last summer Cooper wrote an excellent analysis breaking down the differences in Hicks’ left-handed vs. right-handed swing. It is definitely worth a read and far more in-depth than the breakdown I intend today. What I can say is that the deficiencies in Hick’s lefty swing have become exacerbated through the first month-plus of the season.

Here is his left-handed swing:

Hicks is a dead-pull hitter batting lefty, which often causes his front side to fly open. This, along with the particular violence of his southpaw swing, generates an unwanted amount of head movement, making it harder to track the pitch. Finally, as Cooper noted, Hicks has an inefficient bat path, coming around the baseball rather than through it.

Contrast that with his right-handed swing:

You can see how much more balanced and under control this swing is. He stays square through the baseball, and his head is rock-steady throughout. These sound mechanics allow Hicks to track the path of the ball better and drive it with authority.

I also wondered if pitchers were pitching him differently this year. Turns out the answer is largely no: 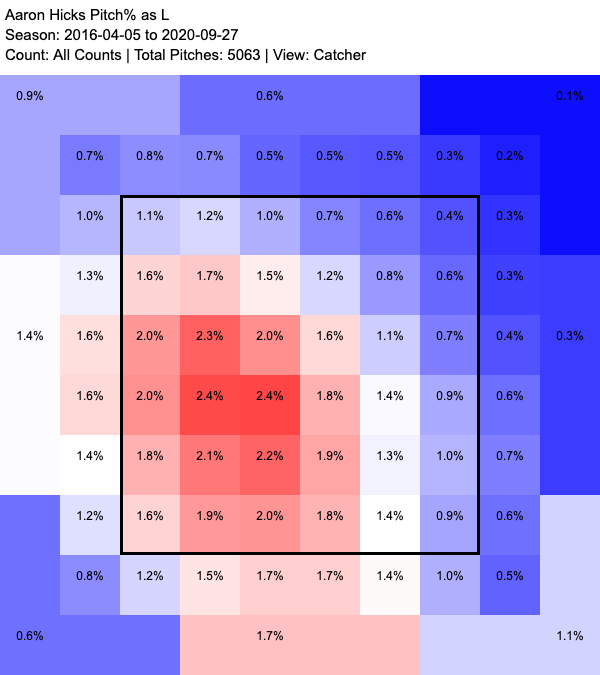 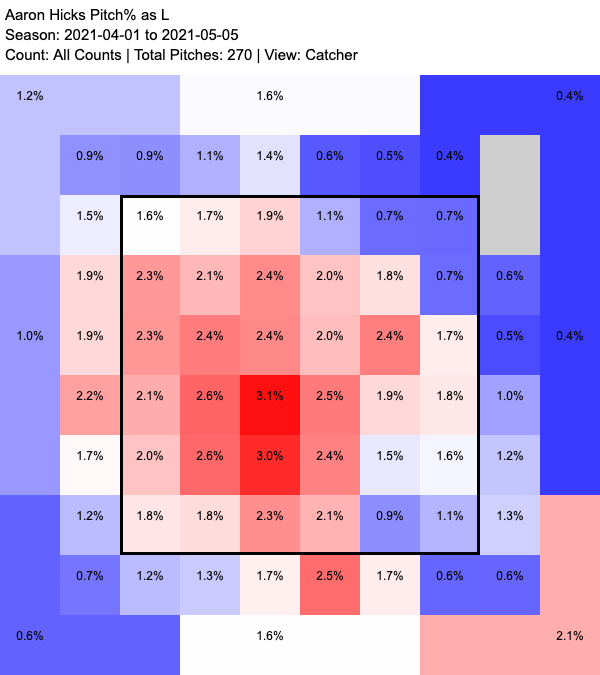 Hicks is seeing roughly the same distribution of pitches batting lefty this year as he did his previous five seasons as Yankee. When you look at the pitches he is choosing to swing at however, the picture becomes a little more clear: 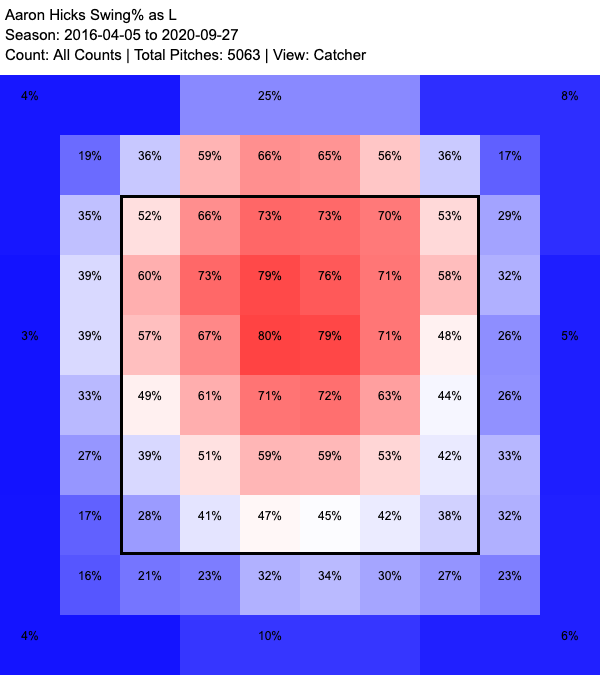 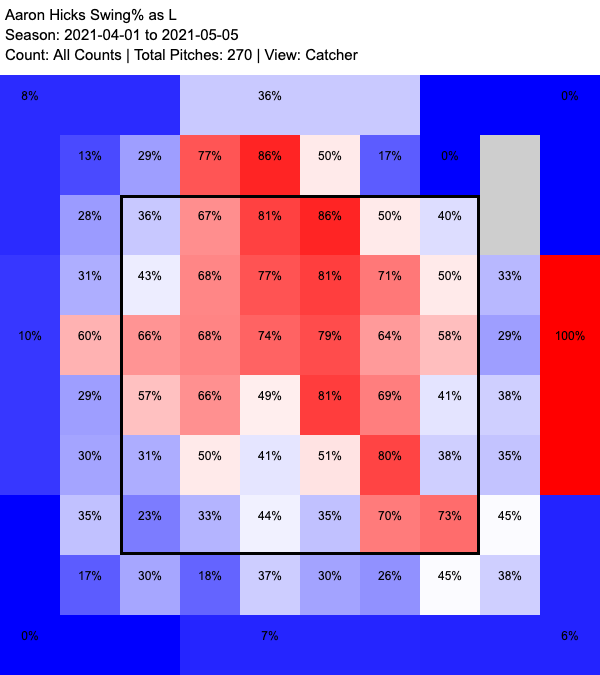 Whereas in previous years, Hicks stayed disciplined, only offering at pitches in his wheelhouse, this year he is swinging much more at elevated pitches and ones inside enough to jam him or induce a whiff. The result of these swing decisions is pretty stark, as he is doing minimal damage on balls put in play: 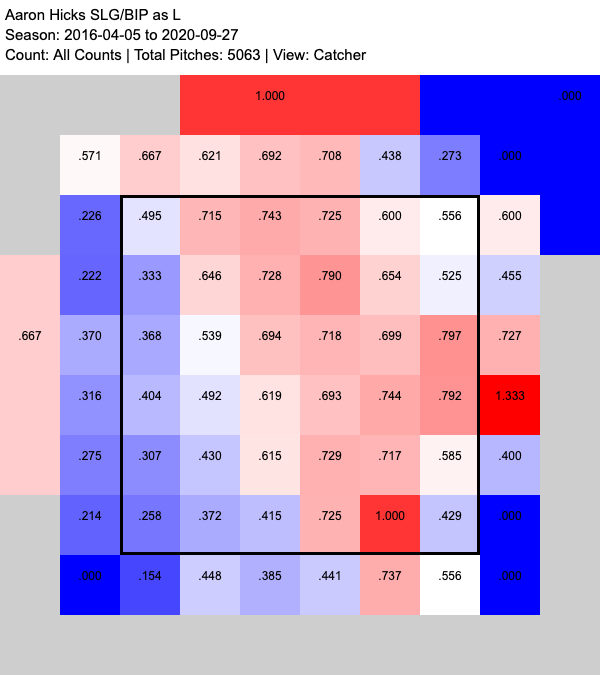 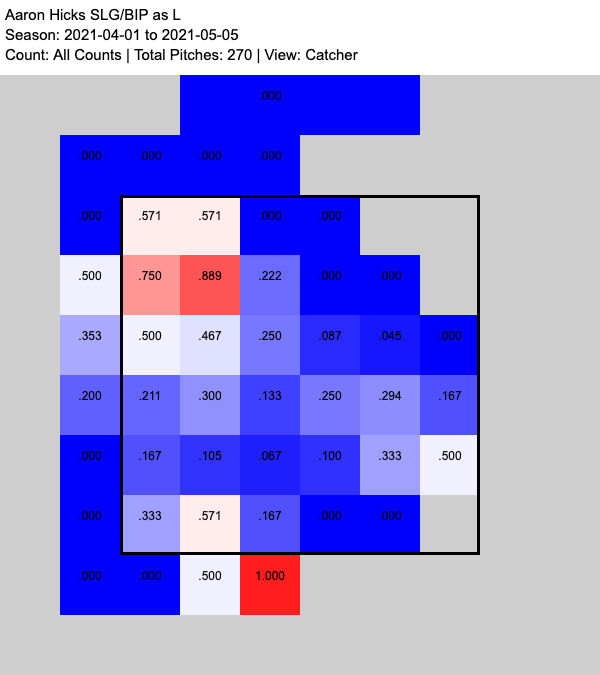 There are a variety of ways Hicks and the Yankees can address his left-handed batting woes, varying from the likely to the borderline-absurd, but when one is performing as poorly as Hicks has been, everything should be on the table.

The simplest solution is to stay the course and have faith that Hicks will eventually break out of his putrid run of form from the left side. Regression comes for us all, and in Hicks’ case you could say he is due for a bit of positive regression. After all, he can’t have declined this much in one year.

While it is unlikely that he will reach the offensive heights of his five-win 2018 season, it’s even more unlikely that Hicks has transformed into a replacement level player overnight. Indeed, there are signs from the last two games that he is starting to turn things around. He collected a pair of hits on Wednesday and three more with a walk yesterday.

A slightly less likely course of action would be to platoon Brett Gardner against right-handed pitching. As improbable as it seems, Gardner’s .493 OPS and 44 wRC+ against righties still represents an upgrade over Hicks’ left-handed hitting production in 2021. And even if he doesn’t hit, Gardner has still been the superior defensive center fielder over the last three seasons. Gardner grades out neutral-or-better across the board (zero DRS, 2.3 UZR, two OAA) while Hicks is the opposite (-11 DRS, -3.4 UZR, -6 OAA).

For those with less of an appetite for a Gardner platoon, might Hicks consider batting only right-handed? This is getting even more into the improbable realm of solutions, but given his success it might be worth a shot. A variation of this strategy is my personal favorite option, but also perhaps the most absurd. What if Hicks continued to bat lefty vs. righty pitchers, but never swung the bat?

The inspiration for this idea came from SB Nation’s Jon Bois, who wondered how good Barry Bonds would have been in his video-game-like 2004 season had he played without a bat. If you haven’t seen the video, I highly recommend giving it a watch.

Applying this to Hicks, how would he fare if he “batted without a bat” - or in this case took every pitch - batting left-handed? I looked at his numbers as a Yankee batting left-handed and, well, it’s kind of amazing. He owns a .294 wOBA when he swings the bat and a .504 wOBA when he doesn’t. That’s Hall of Fame level production by just taking pitches! I know it’s silly and unrealistic but I thought it was a fun exercise.

All of this grumbling may be unnecessary. As I mentioned earlier, Hicks has put together two consecutive games of quality at-bats and he may be on the verge of breaking out on his own. He seems to feel that he is close at the plate, having delivered the game-winning hit in Wednesday’s contest. I certainly hope so, as the Yankees lineup is all the more dangerous with a productive Aaron Hicks working counts, drawing walks, and crushing the baseball.