Gerrit Cole is better than ever, and the AL Pitcher of the Month

The Yankee ace is exceeding his loftiest expectations through a dazzling first month of the 2021 season.

Share All sharing options for: Gerrit Cole is better than ever, and the AL Pitcher of the Month

Gerrit Cole turned around a slow start to the 2020 season with a strong stretch run, and then a handful of stellar outings in the postseason. Even with his struggles to limit the longball and make it deep into many outings, Cole seemed to stumble his way into one of the better statistical portfolios among pitchers in 2020. He finished last season with the 12th-best ERA among qualified starters, but just the 23rd-most fWAR. For most, Cole’s season stats would denote a career year, but for Cole, it was a slight step backwards from his previous season in Houston.

Opponents couldn’t find their way on base much more often than the previous year, but when they did, they did so with much more quality contact. Some of Cole’s backslide can, and should, be chalked up to the high-degree of variance inextricable from a 12-start season, but generally opponents hit him with much greater authority than they had when he played in Houston. In each of his seasons before joining the Yankees, Cole surrendered hard hit percentages around the mid-thirties. In his first season in New York, he allowed a career-high 44.6 HardHit%.

Still, Cole’s all-in-one metrics like wOBA and xwOBA painted him as a better pitcher than he was in Pittsburgh, due to the drastically increased strikeout rates and slightly diminished walk rates compared to his seasons as a Pirate, but the preponderance of permitted missiles took him down a peg from the dominance he displayed as an Astro.

This year, Cole has actually surrendered contact statistically similar to that of last season, but has improved his strikeout and walk rates to such staggering heights it doesn’t even seem to matter. 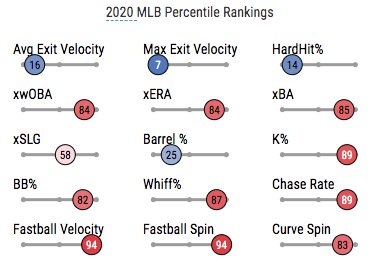 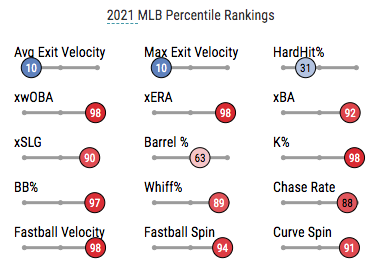 Cole has been historically great already through his first six starts. Through April, Cole leads the majors in fWAR and FIP, and is third in K/9 and ERA. As Jake relayed last week, underscoring Cole’s success is his improved arsenal of pitches. He’s throwing harder than ever, with greater spin than ever, and upped his changeup usage to the point that it is now in line with his other three pitches, and at least as dangerous. Cole’s fourth offering emboldens his other three, as hitters now have to consider the possibility of seeing another kind of pitch at a different speed, and with different movement than they would have had to against Cole in past seasons. Since Cole’s original trifecta is also qualitatively better than it was before, his mind-boggling exponential gains actually make sense.

Still, even Cole can’t beat out Jacob DeGrom, but as he’s out-paced the best version of himself, he’s left the rest of the American League in his wake.