How have opposing pitchers neutralized the Yankees’ power?

Yankees hitters have hit a lot of groundballs this year, so have opposing pitchers changed their approaches to induce this effect?

Share All sharing options for: How have opposing pitchers neutralized the Yankees’ power?

It’s no secret that the Yankees’ offense has been much less potent than expected — going into the season, it looked like — to borrow a phrase that Michael Kay used on the broadcast the other day — there were “no landing spots” for a pitcher in the Yankee lineup. As the season has progressed, though, it has instead become loaded with landing spots. Despite the fact that the team has the third-highest hard-hit percentage in the league (42.5%), fifth-highest barrel percentage (9.2%), and second-highest walk rate (10.8%), the Yankees cumulatively have a decidedly below-average offense, with a 98 wRC+ and a bottom-seven 3.92 runs/game entering play on Friday. It’s not like they’ve been striking out a ton either, as their 24.6 K% is in the middle-third of the league.

Earlier this month, Tom highlighted DJ LeMahieu’s struggle to get the ball off the ground as one of the leading causes of his underperformance this season, and a little digging reveals that LeMachine is not the only Yankees hitter failing to life the ball in the air much in 2021. In fact, over the past three years, the Yankees’ offense has been consistently hitting more and more grounders, with its 2021 ground-ball percentage of 46.1 percent the sixth-worst in all of baseball, an increase from 2020’s 43.8 percent (10th-worst) and 2019’s 41.7 percent (11th-best).

Note: The table is sorted by “1-Year Difference GB%”

I ran the numbers to see if there is any correlation between ground-ball percentage and a player’s wRC+, at least on the Yankees over the last three years. Well, there’s a reason that I’m not including the charts here: the highest R-squared value was 0.01 — only a one-percent correlation!

The data does show, however, that with few exceptions, the increase in ground-ball percentage is a team-wide issue, and not the result of one or two outliers skewing the data (Tyler Wade only has 34 plate appearances and Luke Voit just 50, so they haven’t quite played enough to be true outliers just yet). Such a team-wide trend is not likely the result of a few slumps, which got me thinking — are opposing teams pitching Yankees batters differently in order to induce more balls on the ground?

To investigate this idea, inspired by Tom’s piece on LeMahieu noting that pitchers were pounding the bottom of the zone more against him, I started by looking at how pitchers have approached the three players who have seen the greatest increase in ground-ball rate and who have also played a substantial sample size: Gio Urshela, Brett Gardner, and Gary Sánchez.

Let’s start with the Yankees’ cleanup hitter, Urshela, who has still been able to put together a solid first quarter of the season despite the increase in ground balls (although his performance has seen a definitive decline). Unlike LeMahieu, teams have not really adjusted where they were pitching him all that much ... 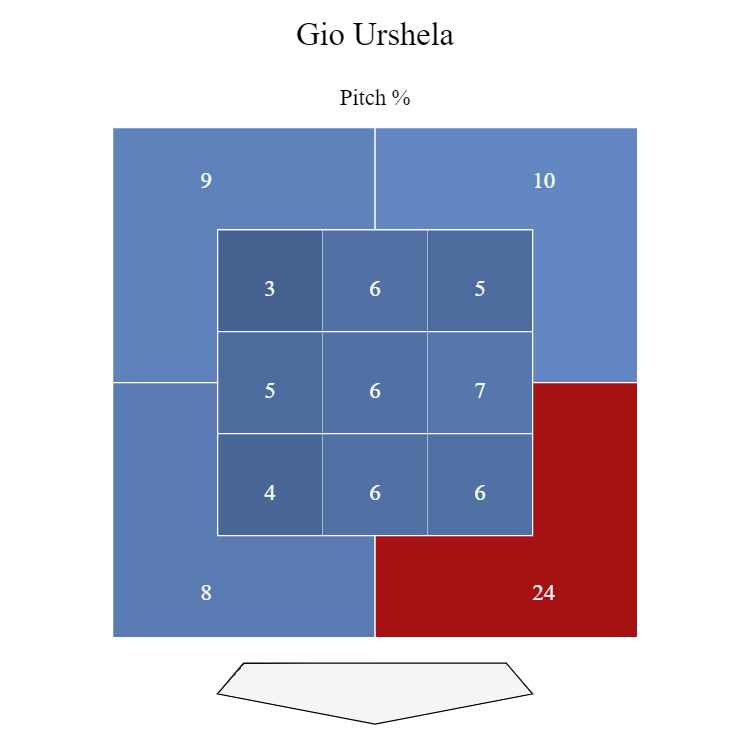 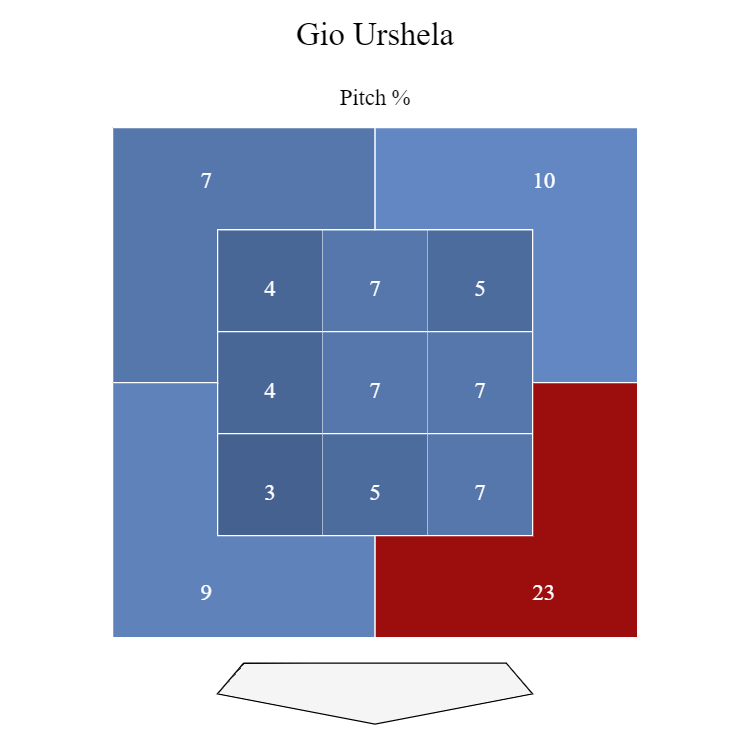 ... but have instead adjusted the pitch mix that teams are using against him. He’s seeing fastballs only 57.5 percent of the time, down from 63.7 percent, while teams are throwing more off-speed pitches and (especially) breaking balls.

Unfortunately, although pitchers have not significantly adjusted where they are pitching Gardner and Sánchez, that’s the extent to which there are similarities between all three. The older outfielder and up-and-down catcher have both seen an increase in fastballs at the expense of the breaking ball.

Mathematically, there is minimal correlation between 2020 offensive performance and either an increase or decrease in fastballs seen, in part due to Wade and Higashioka seeing fewer fastballs. The trends, however, are obvious: four of the top six players ranked by wRC+ have seen substantially fewer fastballs. And while it’s not enough to conclusively attribute the Yankees’ decline in power to a decline in fastballs seen by the team’s best hitters, it is a trend that we ought to keep an eye on as the season continues.