Voit is set to miss another extended spell to injury, but there are several easy fixes once he comes back.

Share All sharing options for: How Luke Voit can get back to the slugger we know when he returns

The Yankees delivered some disastrous news in the span of a few minutes yesterday. First, it was announced that Corey Kluber suffered a sub-scapular strain and was later confirmed that he would miss a minimum of eight weeks. Moments later, we learned that Luke Voit had been diagnosed with a Grade II oblique strain. If Aaron Judge’s Grade II oblique strain in 2019 is anything to go off, Voit could sit for close to two months as well.

Quite a whirlwind of bad news for a Wednesday afternoon, as the Yankees are now without their starting first baseman and their second-best starting pitcher. The team has a tall task replacing their presences in the lineup and rotation, something we hope to explore in the coming days. But for now, I’d like to look at Voit when he was on the field, and what to expect from him when he comes back.

Voit missed the first five weeks of the regular season while rehabbing from knee surgery. In the short time he played before going down with this latest ailment, he struggled mightily. What reasons undergird his slump, and what recourse can he take to avoid the same troubles when he returns?

A lot of people unreasonably expected that Voit would be the instant solution to the lack of first base production upon his return, but it was always going to take time for him to work back to game speed. It’s possible he owed his struggles to uncertainty over the stability of his base after the knee surgery. Perhaps he was trying play through the oblique injury, which has only now been made public. He may even have been pressing a bit trying to make up for lost time. But all of these possibilities are unknowable on our end, and such speculation is unproductive. Instead, I’d like to discuss the issue that we can parse, and that’s plate discipline.

One of Voit’s biggest assets since joining the Yankees is his precise batter’s eye. He was one of the best on the team at controlling the zone, not expanding while doing damage against mistakes. In his short stint in 2021, that tool appears to have eluded him.

The three metrics I look at first when evaluating plate discipline are chase rate, whiff rate, and zone contact rate. Success in these categories means one is not swinging at balls, and when one does get a good pitch to hit, they don’t miss it - generally a recipe for success at the dish.

Unfortunately for Voit, all three marks are trending in the wrong direction. Compared to his first three seasons in pinstripes, his chase rate has jumped from 24.9 percent to 33.6 percent, whiff rate soared from 32 percent to 43.6 percent, and zone contact rate plummeted from 76.8 percent to 65.8 percent. In short, he is having a hard time discerning balls from strikes. 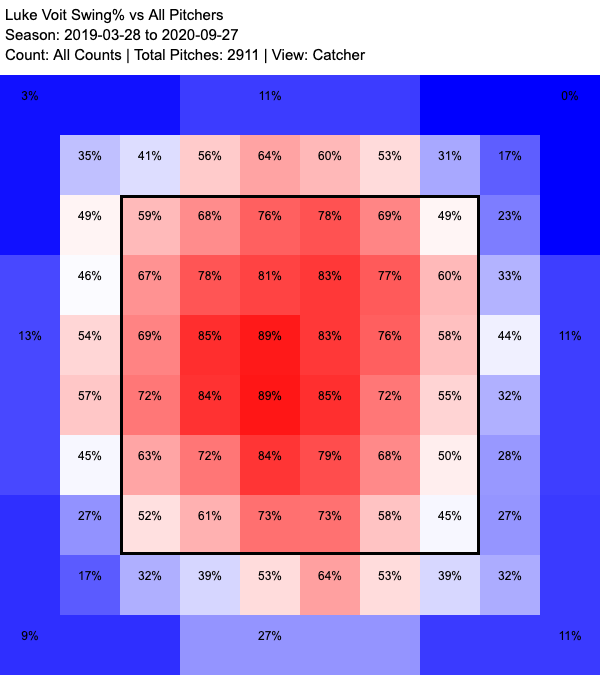 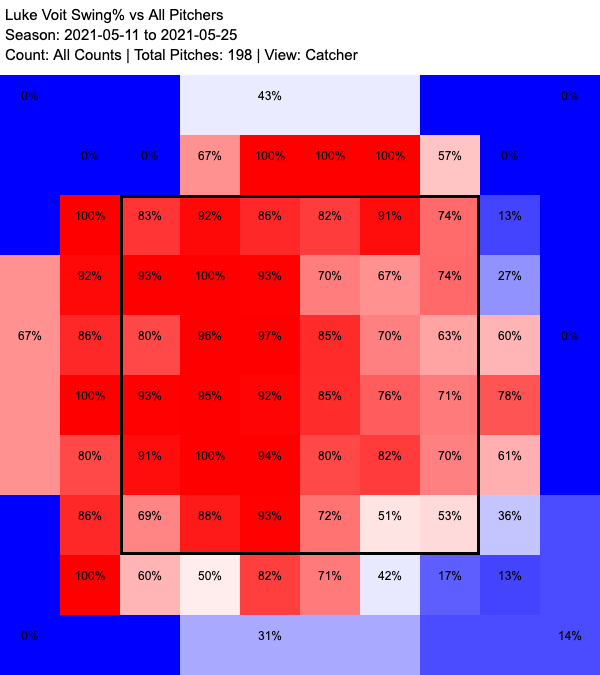 This regression in plate discipline is having a calamitous effect on his production at the plate. His strikeout rate has jumped about four points, while his walk rate has slid by about two points. But most worryingly, his quality of contact has taken a nose dive.

Swinging at bad pitches generally leads to unproductive balls in play when contact is made, and that is exactly what is happening to Voit. His barrel rate and average launch angle have been cut in half. He has lost more than ten points in hard hit rate while posting career-highs in groundball and popup rates. He has lost 3.5 mph in average exit velocity and about five mph in max exit velocity. His sweet spot rate - the percentage of batted balls hit between eight and 32 degree launch angles - is less than a third of his career rate in pinstripes. 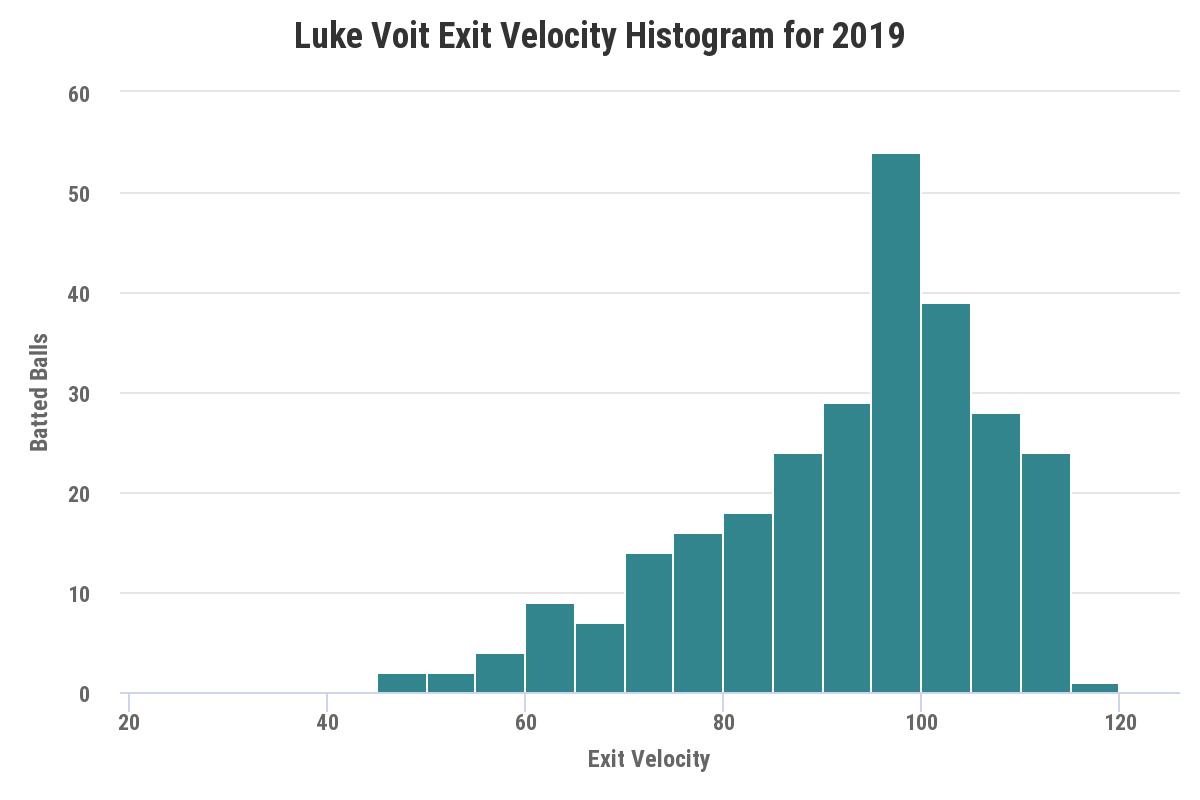 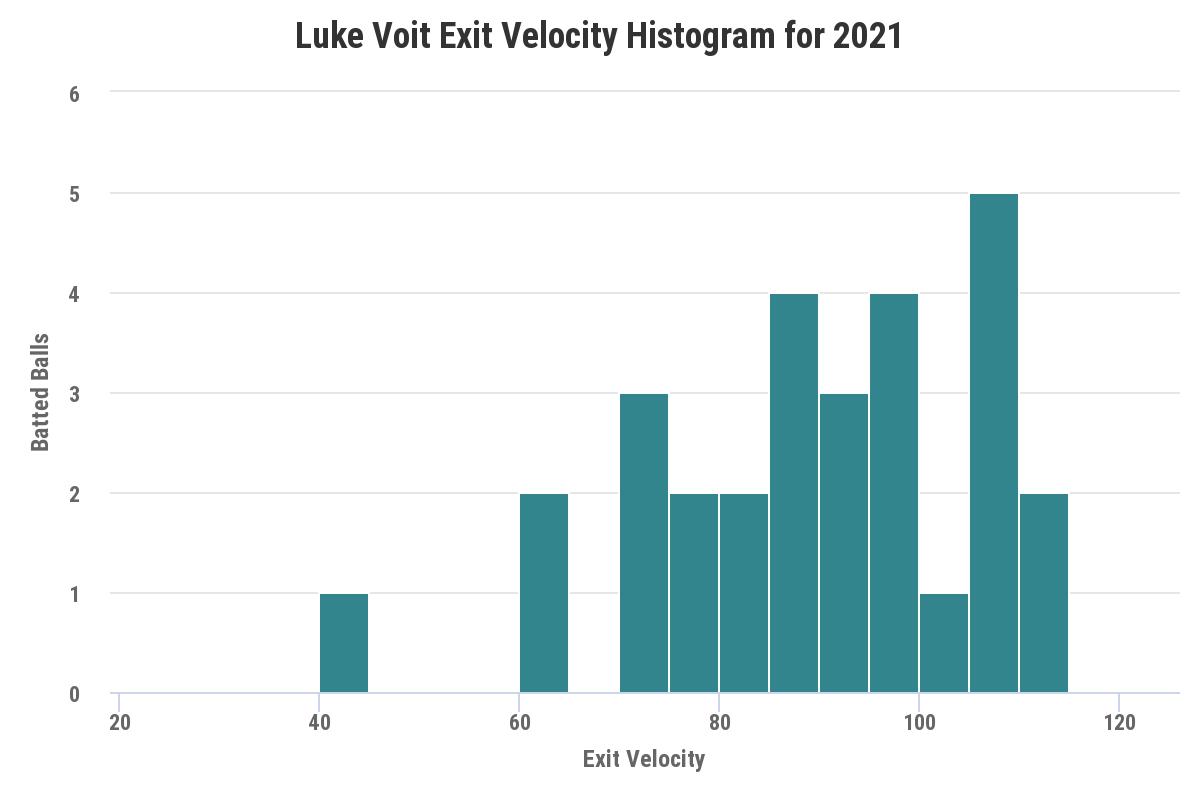 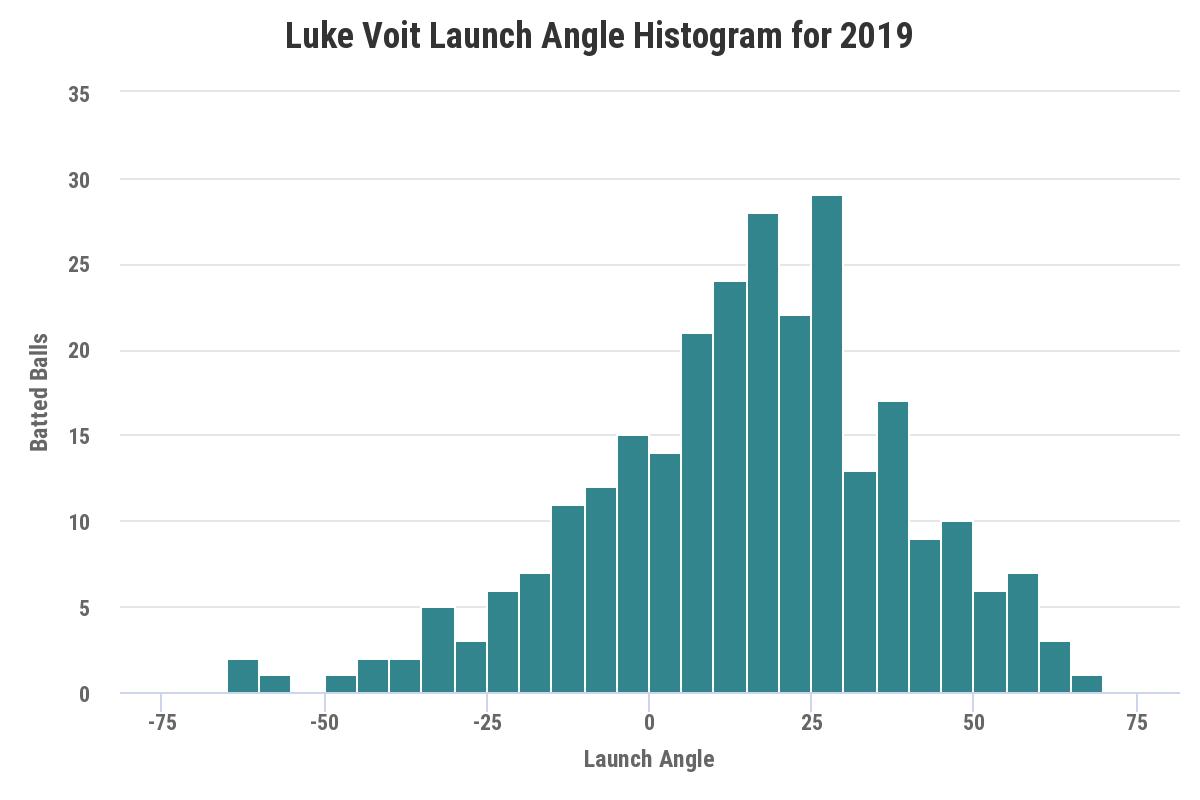 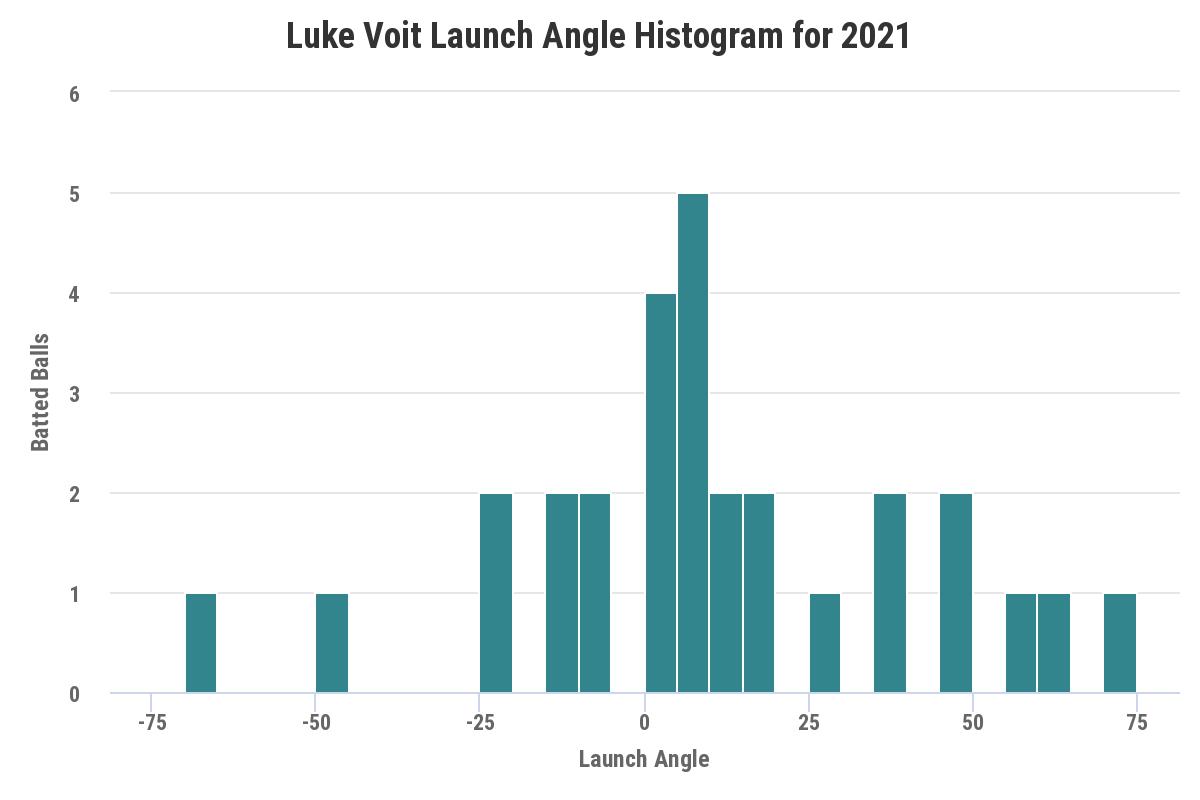 The reason I love these histograms is they tell a visual story. You want a gradually sloping curve with peak outcomes at the optimal performance. In other words, exactly what we see from Voit’s exit velocity and launch angle histograms from 2019. He produced the highest frequency of batted balls at high exit velocities with optimal launch angle. Compare that with 2021, when he is hitting an alarming number of balls less than 85 mph and with a launch angle greater than 40 degrees or less than -20 degrees.

Voit is normally an exceptional fastball hitter. He hunts dead-red middle to down and in and usually tears the cover off the baseball. That is why the more than 400 point free-fall in expected slugging against the heater is so alarming. He is no longer doing damage on his favorite pitch to hit; in fact, he isn’t hitting it at all. 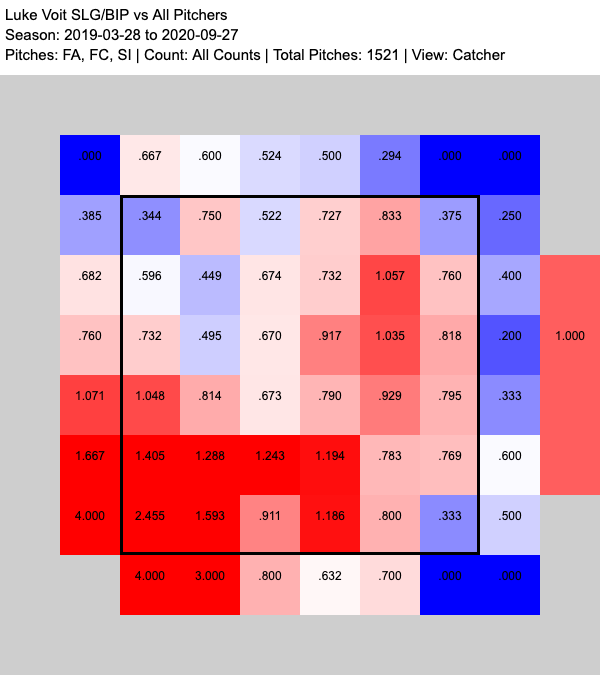 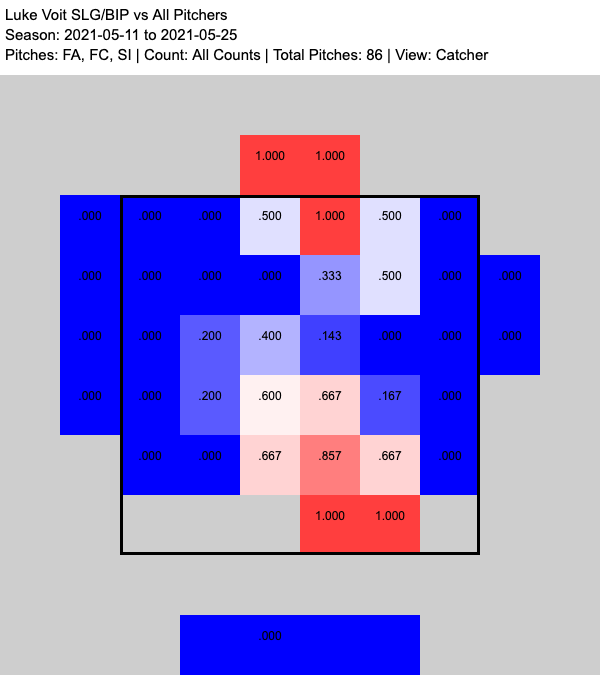 All of these deficits at the plate may seem like an insurmountable obstacle, but they all boil down to one thing: plate discipline. That is why I am confident Voit can recapture the heights that made him the 2020 home run king and a feared bat in the Yankees lineup. For the majority of his career with New York he was the model of excellent plate discipline, and there’s no reason to believe that is a skill that he last overnight. With luck, Voit will return healthy, and with enough time left in the season to rediscover the skill that has made him such a formidable force in the heart of the Yankee lineup.