The Yankees’ third baseman has improved the weakest areas of his defensive game, becoming a lockdown presence at the hot corner.

Share All sharing options for: Gio Urshela is becoming a defensive weapon

During the YES broadcast of the Yankees game against the Orioles, Ken Singleton recalled a story that caught my attention. Singleton recounted how he had recently spoken with former teammate Brooks Robinson, who complimented Gio Urshela’s ability with the glove at third. That the 16-time Gold Glove winner and likely greatest defensive third baseman of all time is impressed with Urshela’s ability to field at the hot corner is high praise indeed.

Announcers on both regional and national broadcasts have effusively lauded Urshela’s defensive work ever since he became a full-time starter for the Yankees in 2019. I’ll admit that I was less enthusiastic about his glove, hesitant to buy into the hype. Upon hearing the commendation from Mr. Robinson, I wondered if perhaps I was being too cynical. If anyone knows their stuff when it comes to manning the hot corner, it’s the Human Vacuum Cleaner.

Looking at the numbers, I wasn’t surprised to find that in Urshela’s first two years in pinstripes, the three most cited defensive metrics — Defensive Runs Saved (DRS), Ultimate Zone Rating (UZR) and Outs Above Average (OAA) — all graded him as a slightly-above average to slightly-below average defender at third. He was worth five DRS, 2.9 UZR, and -6 OAA over that two-season span.

A deeper dive into the data paints a curious picture. Urshela actually performed worse on balls hit close to him than on ones he had to range more to field. Between 2019-20, he was worth -8 OAA on plays where he had to travel between 0 and 20 feet to field, but was worth +3 OAA on balls that he had to travel more than 20 feet to handle. This suggests to me that his biggest hurdle at third isn’t necessarily range, but rather the initial burst of acceleration off the bat. 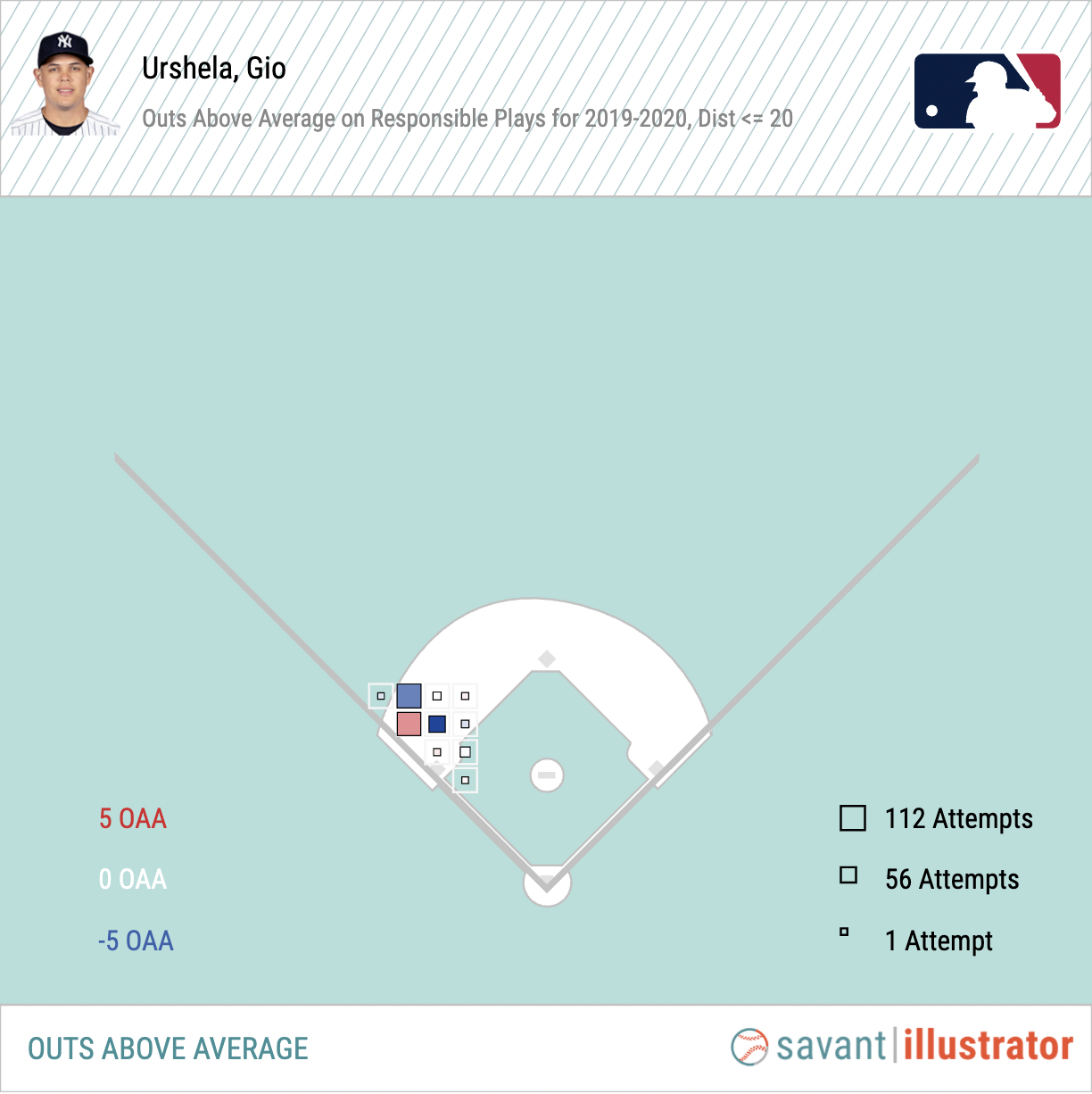 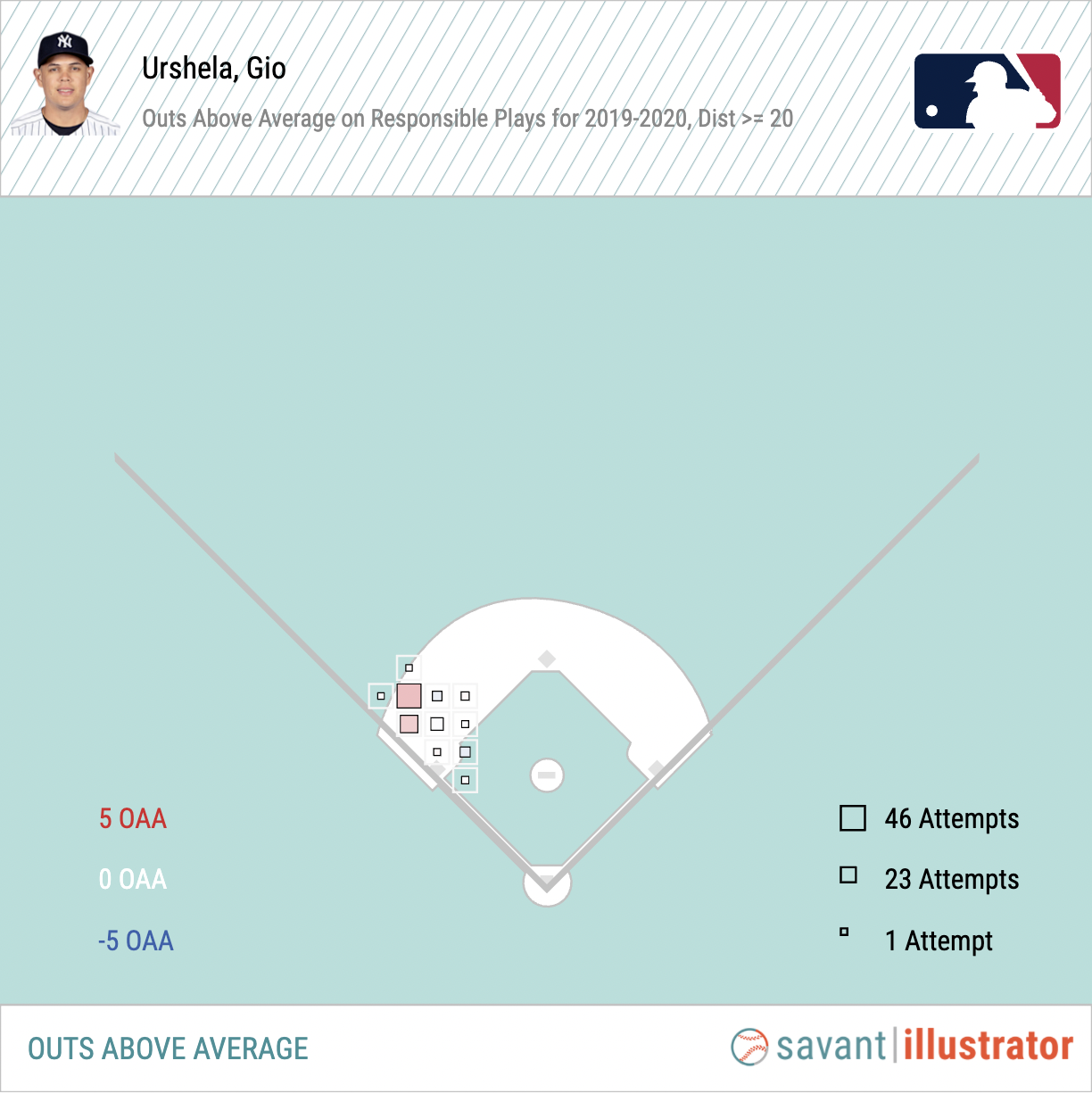 You can see how Urshela’s inefficient jump off the ball leads to a non-ideal fielding position. He didn’t have enough time to get his body around the ball and instead had to awkwardly bend and stretch on the attempt. In addition to the deficit in reaction, the two areas that hurt Urshela the most in 2019-20 were moving laterally to his left and moving back to field the ball, as he was worth -2 and -3 OAA respectively in those scenarios.

It appears that Urshela put in work improving those aspects of his game in the offseason, and the early returns on his performance at third are encouraging. In fact, he has made a huge jump in his reaction off the ball. So far, he has been a net-neutral defender on balls hit between 0 and 20 feet from him — a +8 OAA improvement over 2019-20.

I do have to qualify that 36 percent of those balls in 2019-20 were classified as hard-hit, while that drops to 30 percent in 2021. However, I do not feel that this is a big enough difference to account for all of the apparent improvement.

Urshela has also improved to zero OAA while moving laterally to his left and moving back, a net +5 OAA improvement over 2019-20. All in all, this means that Urshela has turned himself into a slightly-above average defender at third. If he continues fielding the way he has through the first two months, I am confident he will see his +3 DRS, 0.3 UZR, and +1 OAA rise to career-bests.

The other defensive asset that Urshela offers to the Yankees is his competence at shortstop. He played five games at short while Gleyber Torres was unavailable, and acquitted himself well. He graded out a smidgen below league average, though that is more than sufficient in a backup shortstop role given the quality of his bat and lack-thereof in the other backup shortstop options (looking at you Tyler Wade).

Gio Urshela is by no means a defensive superstar at the hot corner among the Matt Chapmans and Nolan Arenados of the fielding pantheon. However, he is more than proficient with the glove at third, and with his improvements so far this year it is easy to see why Brooks Robinson was so impressed by what he saw. Throw on top Urshela’s ability to back up shortstop and the Yankees have a seriously versatile weapon in his glove.