Giancarlo 2tanton: An analysis of the Yankee slugger batting second

Does the Yankee DH actually see better pitches, or is there something else at play?

Share All sharing options for: Giancarlo 2tanton: An analysis of the Yankee slugger batting second

On April 9th, Yankees fans woke up to a bit of a puzzle. Giancarlo Stanton, perhaps the quintessential cleanup hitter and the archetype of the classic four-spot, was batting second against the Rays. I was a little skeptical of the plan at first, but the Yankees have gone 248-162 in games where fans have questioned Aaron Boone’s lineup, so OK, we roll with it. Aaron Judge needed a night off; surely Stanton was just in that spot for one day.

But then, it happened again, in two games against Toronto. Stanton was batting second with Judge third, in an attempt to shuffle the order and spur a stagnant offense. The team only managed three runs in each game, so surely the plan didn’t work, and Stanton would be back in cleanup ... until April 23rd. At the start of a series against Cleveland, Stanton — once again — was batting second.

Stanton went 2-for-4 that night at Progressive Field, and over the next week, absolutely ripped the cover off the ball. In the first three weeks of the season, Stanton triple-slashed .158/.238/.333, a mere 60 wRC+. In the eight games since moving to the two-hole, that’s jumped to .444/.459/.750, a 247 wRC+ including three straight three-hit games. Now, it’s eight games, so caveat caveat, but why don’t we see if he’s actually doing anything different at the plate?

The big argument for moving Stanton up in the order is that he’s likely to see better pitches, and more strikes. Pitchers fear Aaron Judge in the on-deck circle, and thus make Stanton hit his way aboard. We’re only going to look at the eight consecutive games since the start of the Cleveland series, but is Stanton actually seeing different pitches? 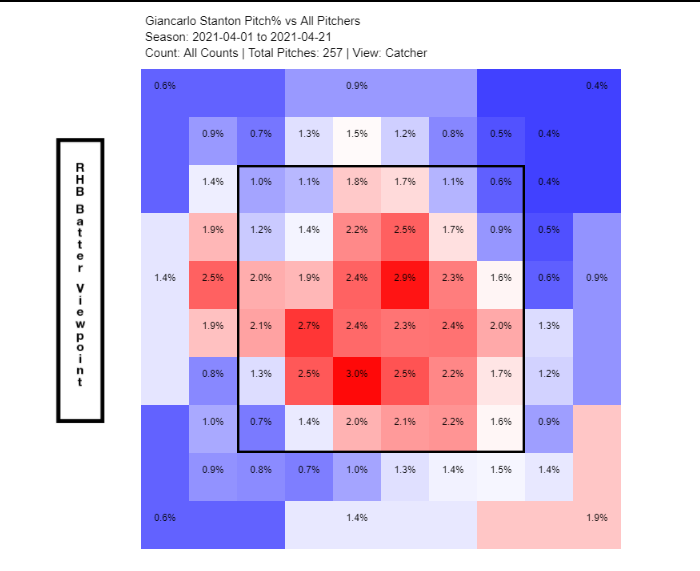 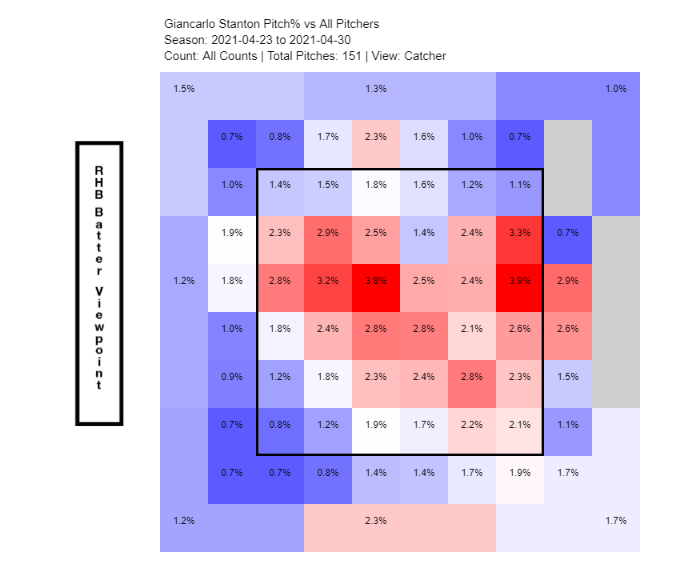 So, broadly, not really. Before batting second regularly, Stanton saw 42.8 percent of his pitches in the zone. After moving, that number is ... 42.4. However, the big difference seems to be the first pitch Stanton sees:

What this shows us is the first-strike percentage, before 2tanton and during 2tanton. It’s apparent that other than DJ LeMahieu, no Yankee regular has taken ball one as much as Stanton, relative to previous performance. Pitchers are either more cautious with Stanton now — the opposite of conventional lineup protection thinking, or Stanton is more patient at the plate. He is swinging more overall, which makes me think pitchers are broadly not challenging him. While he hasn’t walked more — actually much less — in the 2tanton era, he’s cut his strikeout rate in half, leading to more balls in play.

Stanton has posted 30 batted ball events in the 2tanton era, compared to 36 outside of it, but his average exit velo is 6 mph higher, a 73.8-percent hard hit rate against a 61.1-percent rate earlier in the year. He’s back to hitting dry spaghetti, and brought his launch angle up a degree and a half, the difference between hard groundouts and line drives that touch grass. When you couple this with Stanton’s increased tendency to be ahead in the count, the results make more sense.

It’s entirely possible that this resurgence is just what Giancarlo Stanton is: an MVP-caliber bat with a bit of a weird swing, who can go into spells where balls find gloves. Then, when he’s on, he absolutely dominates whoever is on the mound. We haven’t seen this version, perhaps the true version of Stanton, much since being traded to New York, and that may be why we’re so easily swayed by the second-spot-in-the-lineup story.

There’s probably some element of truth to that spot as well. Maybe it’s psychological, that getting Stanton engaged right in the first inning of the game gets him “locked in” sooner. He’s talked before about needing some kind of physical engagement to stay focused. In context, he was discussing his desire to play outfield, but maybe being the second hitter a pitcher sees gives him that engagement in lieu of any action ahead of superior defenders on the depth chart.

Maybe having a hitter of Aaron Judge’s caliber behind him relaxes Stanton at the plate, such that he doesn’t feel like he has to carry a team or be the only player coming up with a big hit. That relaxation might explain why he is swinging a little more — 54.3 percent to 49 percent — in the two-hole. Stanton can go up swinging hard without trying to find the perfect pitch, because if he makes an out, another MVP-level bat is right behind him.

Giancarlo Stanton was never going to hit to a 60 wRC+ all season. Despite how some fans feel about Stanton, his offensive performance has actually gotten better each season in the Bronx. He can mash; the question with him has always been playing time. For right now, he’s mashing, and he’s mashing in the two-hole. There doesn’t seem to be a pitch location cause for that, but maybe there’s a psychological effect, or maybe Giancarlo Stanton is just hilariously good at baseball. Either way, he’s hitting, and until that stops, the Yankees might as well leave this unconventional second-spot hitter exactly where he is.