The one tweak Domingo Germán should make to his arsenal

Contrary to popular belief, a switch from four-seamer to sinker may yield better results.

Share All sharing options for: The one tweak Domingo Germán should make to his arsenal

The Yankees starting rotation has been one of the pleasant surprises of the early season. Very legitimate concerns cropped up about the effectiveness and durability of a four-man rotation behind Gerrit Cole who had collectively pitched 265 innings over the previous two seasons. So far though, Yankees starters have the second-best ERA (3.55) and third-most fWAR (3.5) of any staff in the AL. That said, there is still plenty of room for improvement.

Domingo Germán is one such starter with a wide delta between his current performance and his ceiling. Last month, Cooper wrote about how Germán started to get his season on track after a dismal first two outings. He has continued to pitch well in his subsequent starts, allowing no more than three runs in a game while averaging just over six innings per outing.

Cooper attributed Germán’s success to his above-average curveball and middle-of-the-road changeup, which keep hitters off-balance just enough to compensate for a mediocre fastball. Today I’d like to focus in on that fastball and analyze the ways in which Germán can leverage it to his advantage. Namely, it might be best to exchange the four-seamer for the sinker.

But wait a minute, this flies in the face of the prevailing pitching philosophy. The pervasive belief is that pitchers should feature high-spin, rising four-seam fastballs at the top of the zone. This is true for the pitchers possessing the physical capacity to follow said prescription. But it is an ineffective approach for pitchers lacking the tools to do so, and often leads to detrimental outcomes.

Germán’s four-seam fastball is, for all intents and purposes, one of the worst pitches in all of baseball. A surface-level examination might not reveal that — it sits in the 59th percentile in velocity, 80th percentile in raw spin, 34th percentile in active spin, and 57th percentile in vertical movement. However, it’s the combination of those middling characteristics with his propensity to leave the pitch middle-middle that takes it to the boss tier of bad.

Out of every pitch in MLB, according to Statcast, his four-seamer is the 11th-worst in terms of expected slugging (.949), 20th-worst in expected wOBA (.557), and 10th-worst in hard hit rate (81 percent). I had to do a double take on that last stat: four out of every five four-seamer put in play off Germán is batted at least 95 mph!

Germán is a veritable meatball dispenser with the four-seamer. It’s why he has given up four home runs already on the pitch, why batters are whiffing only 14.5 percent and striking out 14.3 percent of the time when he throws it. Routinely leaving it in the hitter’s happy zone explains the 81 percent hard hit and 23.8 percent barrel rates against: 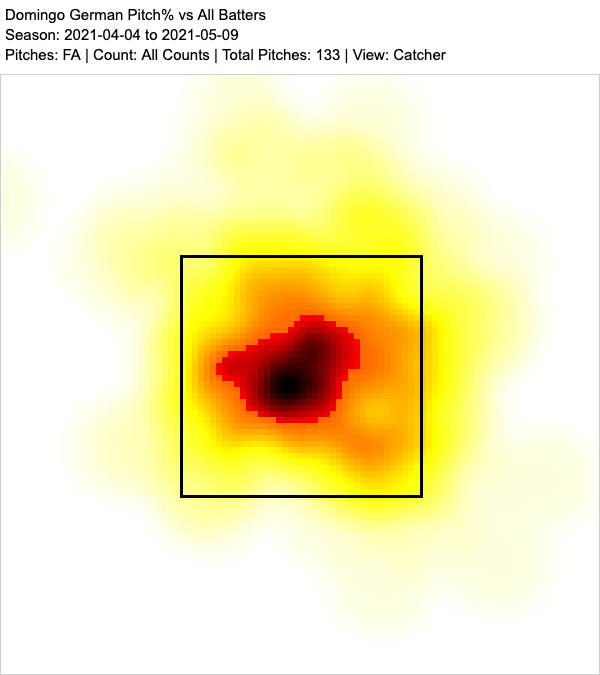 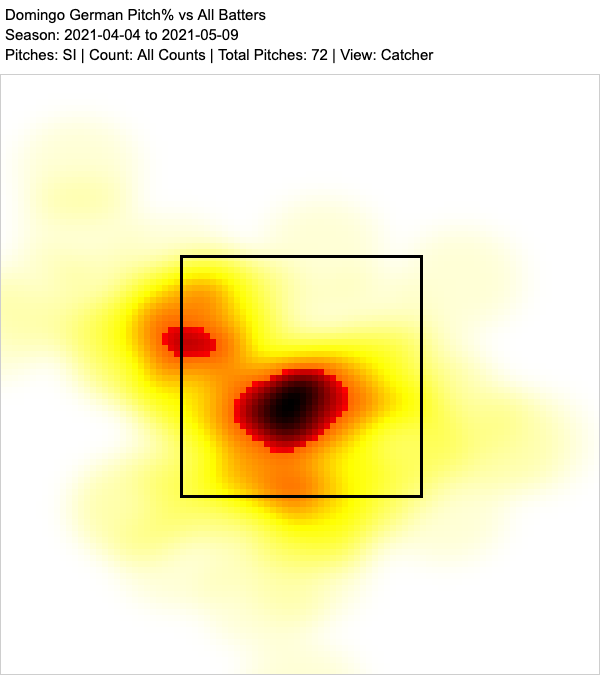 If Germán is going to insist on living over the heart of the plate with the fastball, he should do so with a version that doesn’t get consistently clobbered. While hardly a plus-pitch, the sinker can at least mitigate disaster. It has an expected wOBA almost 200 points lower than the four-seamer, is impacted 8.5 mph slower on average, at a launch angle 15 degrees lower. Hitters barrel it at roughly two-thirds the rate of the four-seamer while it gets hard hit at less than half the frequency.

Here’s an example of what I’m talking about:

Alex Bregman crushed this cookie four-seamer for a home run. Compare that with a sinker he threw in the exact same spot later that game:

Carlos Correa pounds it into the ground for a harmless ground out. In essence, the sinker gives Germán greater leeway when missing his spots. So far this season, he has achieved above-average vertical and horizontal movement with the pitch, so perhaps with further refinement he can turn it into a reliable offering.

Not everybody has to fall within the four-seamer school of thought to be successful. Corey Kluber almost entirely abandoned the pitch for a sinker/cutter combo starting with his outing against the Orioles on April 27th, and has allowed three earned runs in 20.1 innings since. Jonathan Loaisiga is having a career year — in fact he has been one of the best relievers in baseball — and this coincides with him swapping the four-seamer for the sinker. Michael King has yet to surrender a run and almost never features the four-seamer.

We have seen the Yankees begin to eschew the one-size-fits-all approach. Rather than impose a rigid framework over the whole staff, why not work to hone the pitches that work best for each individual? Loosening the strict adherence to the four-seam fastball doctrine has yielded early returns for the likes of Kluber, Loaisiga, and King, and there is plenty of evidence to suggest it will also work for Germán.