The Yankee pitcher has been a classic case of actual and expected stats through four starts.

One of the biggest questions of the analytical age is how much of a player’s performance is real, and how much is noise? This is really the driving question behind so much of analytical development — RBI as a comparative tool are pretty noisy, wOBA is less so, and that’s why the analytical movement has shifted away from RBI.

Cutting out noise is particularly tough when it comes to early season returns. Stats need time to normalize, hitters that start cold will have a hot streak, etc. However, we can look at some stats and try to get a picture of true talent, even after just a month’s worth of data. Today, we’re going to try and do that with Jameson Taillon.

The specific thing that captivates me about Taillon is his four-seam fastball. He throws it a lot, over 50 percent of the time so far in 2021, and has a very specific plan about where he likes to throw it:

This is very much in line with conventional understanding of pitching. With uppercut swings dominating the game — even Kyle Higashioka is doing it! — you throw hard above the swing plane, and guys can’t hit it.

The problem for Taillon is, guys have hit his fastball. They’re posting a .416 wOBA and slugging .636 on his fastball, or about the same as what José Ramírez does over a full season. Yet, if we compare Taillon to the rest of the league, we see something odd:

That red triangle is Taillon, fairly high up the x-axis, but much lower on the y, which indicates a pretty significant gap between how bad his fastball has been, and how good we would expect it to be based on exit velocity and launch angle allowed on fastballs. In fact, if we just straight ranked “underperforming” fastballs, Taillon pops up pretty high on that list:

So all of this is to say that, in theory, Taillon’s fastball should be a better weapon than it’s been so far, and that’s likely the reason he relies on it so much. So the question is, why is his fastball underperforming?

Right off the bat, as with everything in April, it’s been four starts. If you look at that spreadsheet, Taillon has thrown far more fastballs than any of his comps, except for Zack Greinke, but he’s still only thrown 162 fastballs. Over the course of a full season, we’re going to see a lot more fastballs — Gerrit Cole, who throws his fastball about half the time too, threw more than 600 in 2020. We don’t know how many innings Taillon will get this season, but he will hopefully eclipse the 73 that Cole threw last year, so we can expect to see at least three times as many fastballs that we can evaluate in October than we can evaluate now.

The second likely has something to do with defense. Fastballs consistently generate the hardest contact, and yet Taillon has been able to suppress a lot of hard contact with his fastball. His 86.9 mph average exit velocity on the fastball is in the 83rd percentile of baseball, which is really good for a guy that leans so heavily on the pitch. It’s easy to see how he can generate that soft contact, just look at his first inning of work on Sunday in Cleveland:

Taillon bears a fastball up and in to one of the best hitters in baseball, and Ramírez pops it up for an easy out. 64.1 mph exit velo. The previous batter, César Hernández, was set down similarly:

This time, Taillon is more in than up, but the pitch is still belt high and all Hernandez can do is blip a 56.3 mph ground ball for an out. Because Taillon is working above or inside the swing plane, it’s hard to barrel his fastball up, and you get a lot of weak contact. xwOBA loves weak contact, and it strips out defense. wOBA does not control for defense, and certainly the Yankees have had some defensive misadventures in April.

So there is good reason to believe Taillon’s primary offering will get better as the season goes on. But there is one thing that concerns me, and is a leading indicator that he may continue to have an “underperforming” fastball, even if it does improve.

Taillon has a high spin rate on his four seam. His 2452 average rpm is 31st in baseball, in the top 20 percent of the game. Right away you think, oh, ok, that’s good. The trouble is, there’s a lot of useless spin on the pitch. There’s a concept called active spin, which is basically, what percentage of a pitch’s spin actually contributes to deception, or in the case of fastballs, perceived rise?

Guys with elite, elite fastballs tend to see about 98-99 percent active spin. This bucket is where you find Cole, Lucas Giolito, Edwin Díaz, Shane Bieber ... the fastball has very little wasted energy, all of the energy transmitted from the hand goes into its perceived rise. This is why, for example, even though Shane Bieber doesn’t throw as hard as Gerrit Cole, the fastball is still really effective. It looks like it’s rising more than other guys’ fastballs.

Taillon doesn’t have that kind of active spin. He is 31st in baseball in total spin, and 260th in active spin, at just 80 percent. Basically, a fifth of the energy put in the ball is wasted every time he throws it. This begins to matter when you miss your spot. Let’s go back to that at bat against Hernández. Yes, Taillon got weak contact on the fastball inside, but that’s not what Gary Sánchez called for: 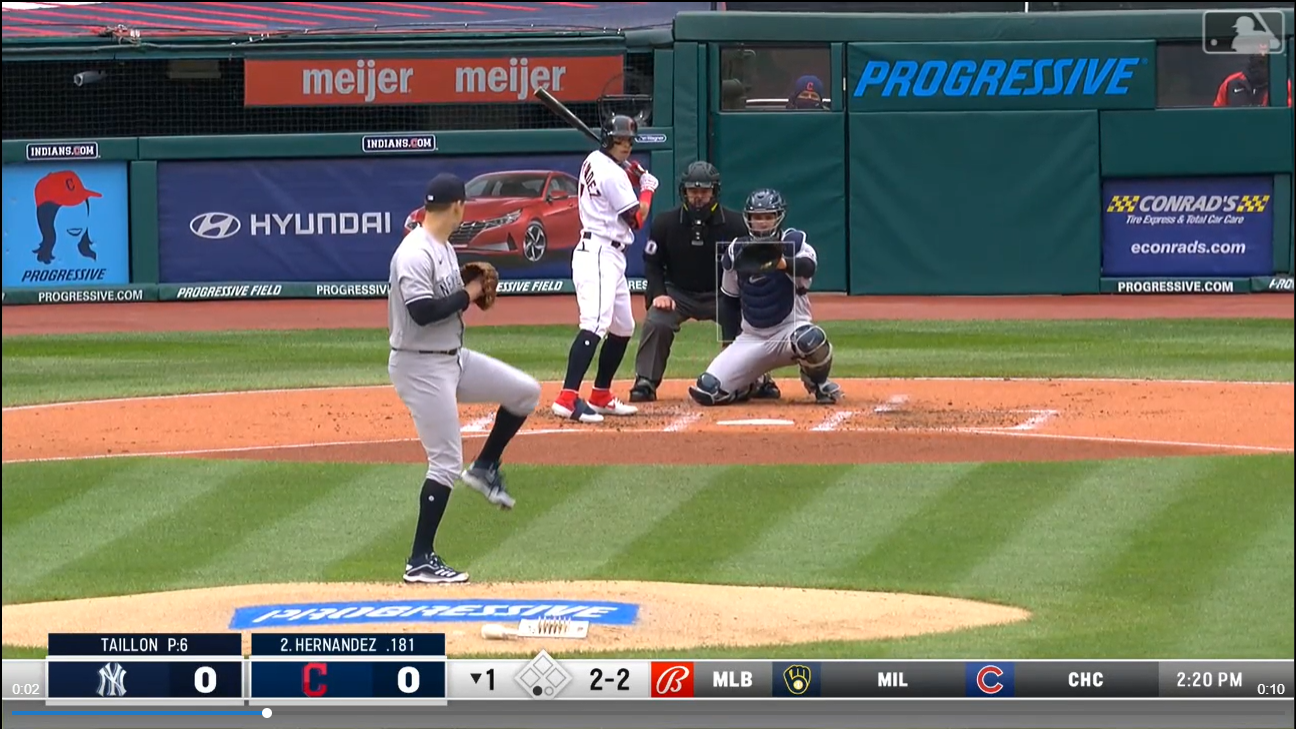 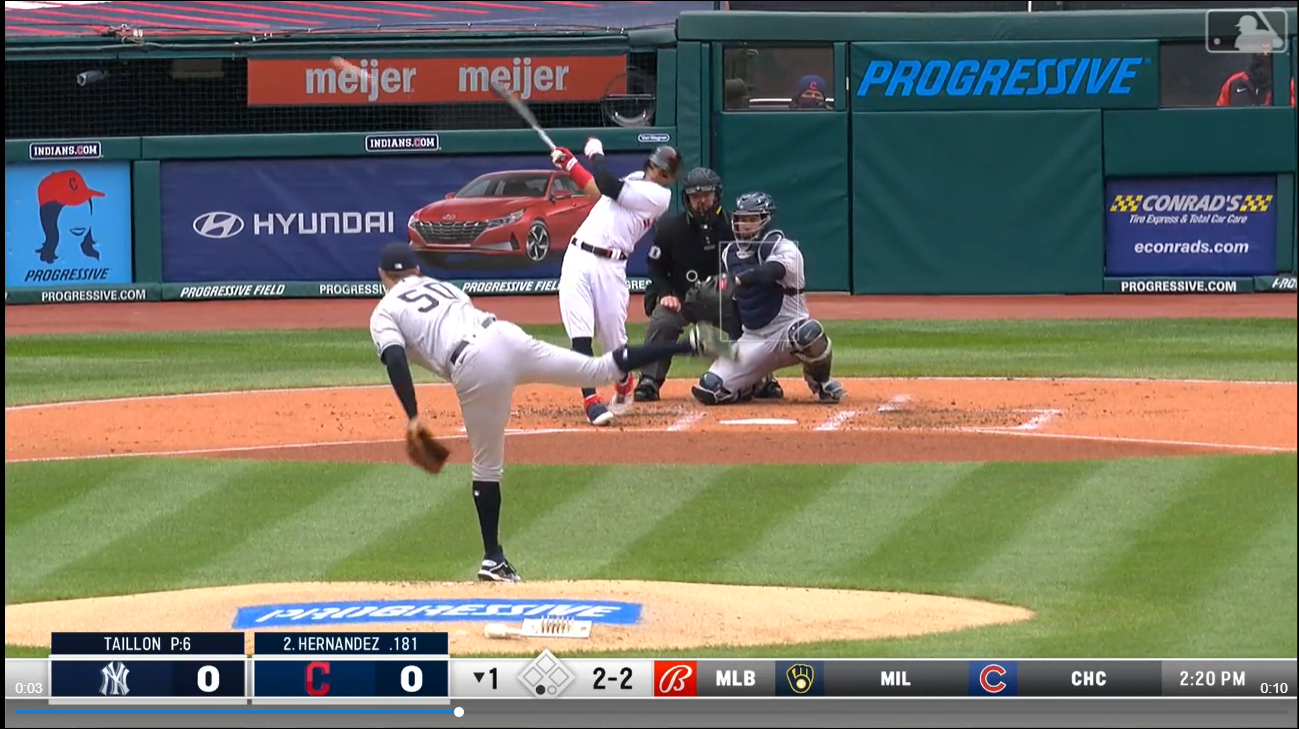 The target is at the top of the zone, at the letters. They’re going for a strikeout. Instead, Taillon misses badly, dragging the ball glove side. The result is positive, but missing spots that badly is a dangerous game to play. Taillon got away with it against Hernández, but the backbreaker of his start was a spot he missed equally as bad:

The target is inside, at about the thigh. Instead, the ball ends up up and out over the plate:

Now, everybody misses spots. Nobody has perfect command, Taillon is coming off a long time on the shelf, etc, etc. The reason why I’m worried about his fastball going forward is this unique combination of missing spots without much deception. Gerrit Cole misses spots too, but when he misses, the ball is travelling 98 mph and “rising” about 28 percent more than an average fastball. In effect, if Cole’s command isn’t in top shape, his pure stuff is good enough to let him make mistakes.

Taillon … not so much. His fastball sits 94, and rises two percent more than average, virtually imperceptible. If his location is on, he, his catcher, and the Yankees analytic team can probably effectively set targets that shield some of the mediocreness of the fastball. If he misses location, though, he just doesn’t have the stuff to build any margin for error.

We’re running a little long here, so thank you all for still reading. There are two final points that I think are worth discussing. There’s still a lot to be happy about with Taillon — his control has been fantastic, his walk rate the same as Jacob friggin’ deGrom. But herein lies the difference between command and control. Taillon will throw the ball in the strike zone, but misses his targets to the extent that it might have just been better for him to throw outside anyway.

Lastly, I don’t know what the fix is. The obvious answer is, he’s got to either fix his command issues or develop a more deceptive fastball. There are ways to make your spin more efficient, with different grips or mayhaps a substance or two. One would hope that as Taillon continues to build up his arm after so much time off, the command will start to mature. Of course, command stays bad until it’s not — if Taillon keeps leaving pitches out over the zone, or can’t bring his fastball down enough to entice a swing, a problem in his start against the Blue Jays, he may not be in games long enough to see a notable change.

Jameson Taillon has fascinated me since the Yankees traded for him. I follow his starts closer than any Yankee save Cole, and I think there are really interesting pieces in his skillset. But while his fastball probably won’t get clobbered over the rest of the season the way it has to date, it’s also probably not going to be the elite weapon some of the expected stats suggest, since the raw movement of the pitch isn’t elite. When he hits his spot, he’s effective. When he misses, he just doesn’t have the deception to get away with it.