Jonathan Loaisiga has been one of the best relievers in baseball

The hard-throwing righty has forced his way into the inner circle of trust in the Yankees bullpen.

Share All sharing options for: Jonathan Loaisiga has been one of the best relievers in baseball

Many have remarked upon the Yankees bullpen through the first three weeks of the season and how it has been the saving grace of the team. That is no exaggeration, as the Yankees relievers lead all of baseball in ERA (2.08), FIP (2.94), and fWAR (1.9). Even without their setup man Zack Britton, players have stepped up all over the depth chart with important contributions. Aroldis Chapman is pitching perhaps the best of his career, while even bulk guys like Luis Cessa are more than pulling their weight.

The discourse around the bullpen construction, and arguably its biggest negative, is the relative investment poured into its arms and the perceived inability to develop talent internally. Last season, between Chapman, Britton, and Adam Ottavino, the Yankees had almost 15 percent of their total payroll tied up in three relievers. That is likely not sustainable, particularly when other teams are able to churn out power arms making minimum salary and the Yankees have several big contract decisions looming on their core players. That is why Jonathan Loaisiga’s ascent to become a trusted high-leverage reliever is so encouraging.

Across 13.1 innings, Loaisiga owns a 1.35 ERA while allowing only nine baserunners. In fact, Loaisiga has been more than just a high-leverage reliever. By some metrics, he has been a top-ten pitcher in baseball. He sits sixth in xwOBA (.211) and ninth in groundball rate (60 percent) among all pitchers with at least ten innings pitched, and tenth in K-BB% (26.1 percent) among relievers.

There were plenty of Yankees fans and reporters who were ready to write the reliever off after a couple of shaky and injury-interrupted seasons. So how is it that the 26-year-old righty has gone from zero to hero? There are two improvements that stand out the most: he has cut back on free passes and he is keeping the ball in the ballpark. His walk rate sits at a stingy 2.2 percent - roughly eight points lower than his previous career average of 10.1 percent - and he has slashed his home run rate nearly in half.

The way that he has achieved this is noteworthy in and of itself. He has bucked the trend of many of his Yankee pitching compatriots and inverted his primary fastball usage, eschewing the four-seamer for the sinker. It’s almost like he has adapted an old-school pitching approach, locating his sinker low in the zone, something that has helped produce a 1.5 degree average launch angle and resulting groundball rate. 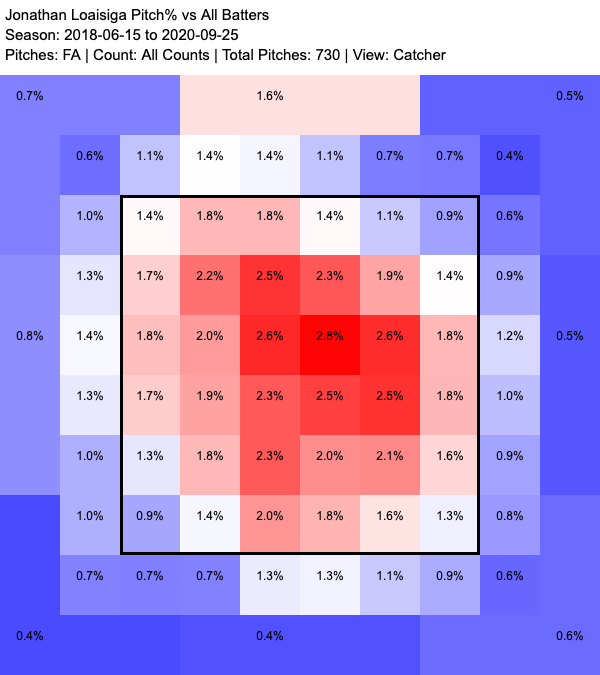 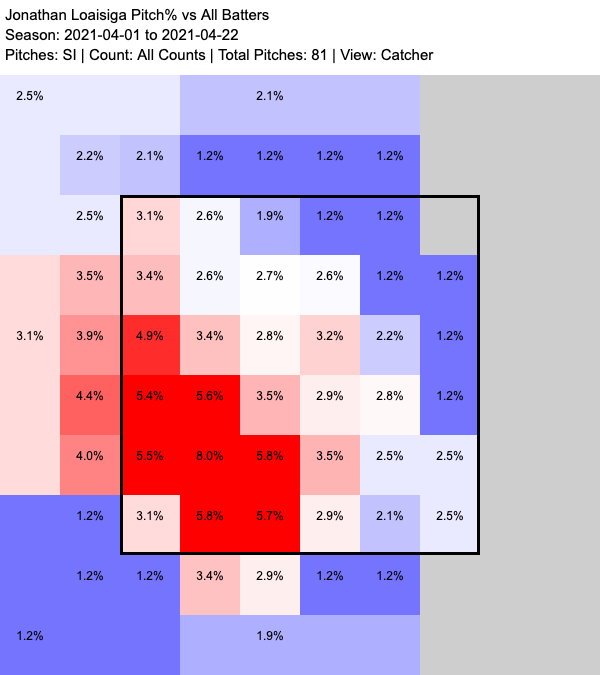 He has also added greater deception to his delivery. Loaisiga is getting close to five inches more extension at release point. This minor tweak in mechanics gives less time for the hitter to react, making his electric stuff play up even more.

Finally it appears Loaisiga has tinkered with the dynamics of his secondary offerings, and the changes have paid dividends. He reshaped his offspeed pitches - perhaps a product of work at the Gas Station - focusing more on the horizontal movement of his changeup (three inches more fade vs. career average) and curveball (four inches more break vs. career average) and not so much on their respective vertical drops. The results: career-bests in xwOBA for both pitches.

Loaisiga has come a long way, from a bulk-inning guy used in bullpen games to a high-leverage arm ensconced within the inner circle of trust. The pinnacle of his ascent (so far) came last night, when he was entrusted with the four-out save opportunity in a one-run game to try and preserve the win following Gerrit Cole’s masterful seven-inning, eleven-strikeout performance. He did just that, retiring all four batters on 12 pitches, continuing to repay the Yankees’ trust in him and further stamping his case as one of the dominant relievers in the game.